Ectopic pregnancy (EP) is a complication of pregnancy in which the embryo attaches outside the uterus. The rate of ectopic pregnancy is about 1 and 2% that of live births, though it may be as high as 4% among those using assisted reproductive technology (ART). We present two cases of interstitial stump pregnancies in patients who previously underwent salpingectomy for ectopic pregnancies, and a review of the literature. One patient has been treated with methotrexate (MTX) before the removal of the tubal stump, while the second has gone directly to laparoscopic (LPS) surgery. Transvaginal ultrasound examination is essential for early and accurate management of this condition. It should be quickly performed to rule out a stump interstitial pregnancy in women who conceive by ART after bilateral salpingectomy. A correct attitude towards this condition is not yet internationally standardized and both medical and surgical options should be promptly considered.

Ectopic pregnancies (EP) represent the most serious complication of the first trimester of pregnancy. In the vast majority of the cases the embryo prematurely implants itself in the fallopian tube before arriving in the uterine cavity. Only in approximately 2% of the cases EP occur in different regions such as the cervix, the ovary or the abdominal cavity [1-5]. An atypical and insidious severe event is that the embryo migrates from the uterine cavity to the contralateral tube. We report two cases in which the EP occurred in a fallopian stump after in vitro fertilization (IVF) in women subjected to monolateral salpingectomy for a history of ectopic pregnancy. We present also a review of literature about interstitial pregnancies in tubal stump (Table 1) and a review about EP in unusual sites in women with previous salpingectomy (Table 2) [6-10]. 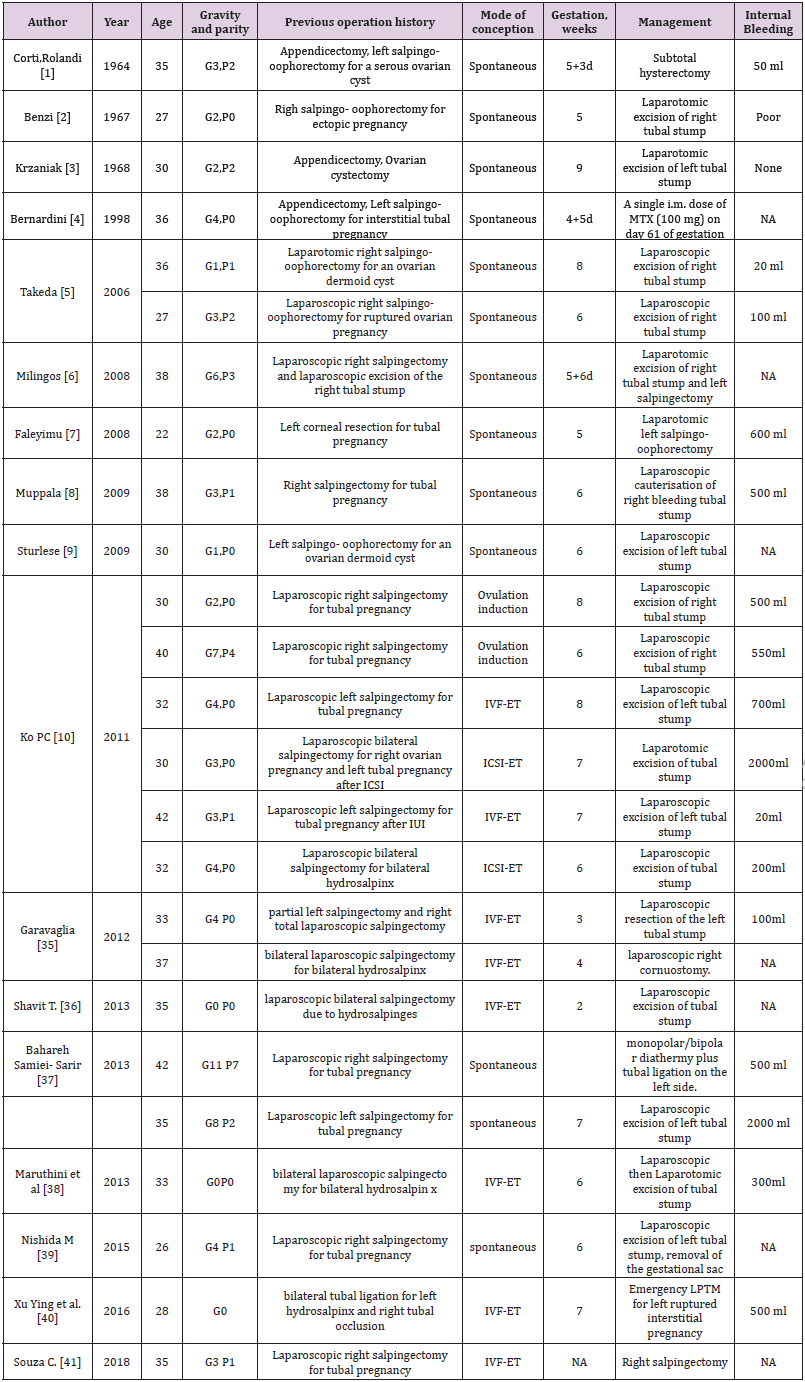 Table 2: Review of literature: EP in unusual sites in women with previous salpingectomies. 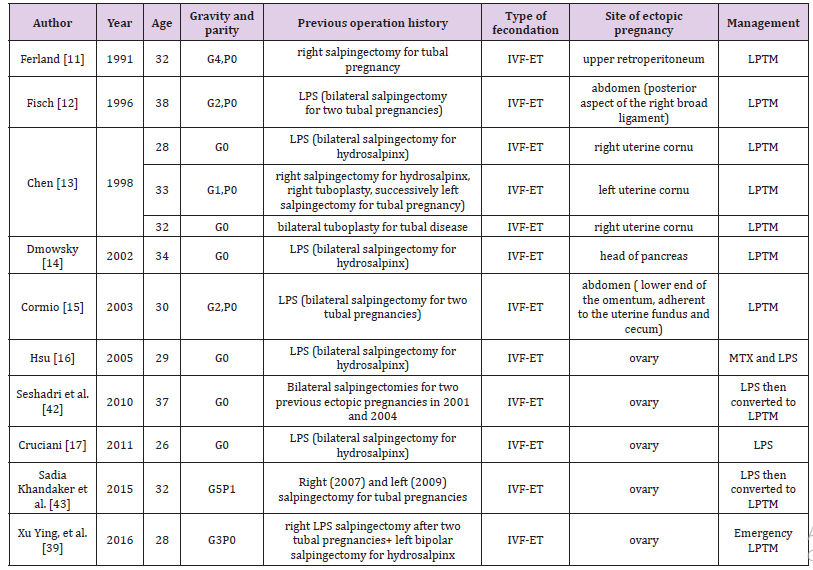 A 36 years old patient referred to our center to ascertain implantation after IVF-ET at the 58th gestational day. The patient had a history of right salpingectomy for GEU. HCG was 2293 IU/L. Obstetrical examination showed a small uterus with no pain. Ultrasound revealed no intrauterine pregnancy, but a gestational sac of 14 mm adjacent to the right uterine cornu with no signs of embryo viability. Power and color Doppler revealed the presence of the vascular ring with a strong peri-trophoblastic vascular activity (Figures 1 & 3). After careful counseling it was decided to attempt medical management using the single dose regimen with i.m. MTX (50mg/m2). Four days after treatment the patient complained strong abdominal pains, low blood pressure and severe anemia. Laparoscopy was carried out and the right tubal stump was removed. Histological examination confirmed the diagnosis of ectopic pregnancy of the right tubal stump. The patient was discharged on day 2 postoperatively and no short- or long-term complications were reported [11-17].

Figure 1: The gestational sac of 13 x 14 mm with no signs of embryonic viability in the right interstizial tubal stump at 58 days of pregnancy (Case 1).

Figure 3: The right tubal stump with the ectopic pregnancy of about 20 mm in diameter (Case 1).

A 25 years old patient referred to our emergency Department for pain in the right iliac fossa. She was at 7 weeks of gestation after embryo transfer achieved by ICSI. The patient had a history of right salpingectomy for GEU. Pelvic examination revealed pain in the right adnexal area and US showed a gestational sac of 11 x 10 mm with no signs of embryonic viability in the right interstitial tubal stump (Figures 4 & 5) and hemoperitoneum. HCG was 8839 IU/L. The patient was subjected to an emergency laparoscopy and the right tubal stump was removed. Histological examination confirmed the diagnosis of ectopic pregnancy in the right tubal stump. The patient was discharged on day 2 postoperatively and no short- or long-term complications were reported.

Figure 4: The gestational sac of 11 x 10 mm with no signs of embryonic viability in the right interstizial tubal stump pregnancy (Case 2). 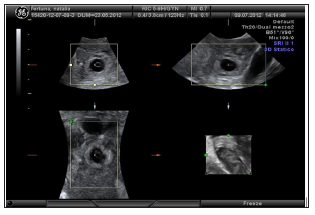 Though the etiology of EP is multifactorial, as many as 50% of women with an EP have no identifiable risks. Widely accepted risks for EP are not necessarily independent of one another and can vary depending on the population being reported. Risk factors include prior EP, prior tubal and generally pelvic surgery, IUD and a history of pelvic inflammatory disease (PID) [18]. In patients undergoing ART, the chances of an embryo spontaneously implanting at the interstitial tubal segment are higher when compared to a spontaneous pregnancy [19]. Tubal stump pregnancies can occur when the embryo or the oocyte migrate through the uterine cavity or when the oocyte passes through a tubal fistula [3,9]. A review of the literature conducted by Chin et al. [20] reported 22 cases of cornual pregnancies after IVF-ET.

In women with a history of salpingectomy, some cases of unusual implantation sites have been reported. Fisch et al. [12] in 1996 reported a case of an abdominal pregnancy following in vitro fertilization in a women subjected to bilateral salpingectomy. Dmowsky et al. [14] reported a retroperitoneal ectopic pregnancy located in the head of pancreas in a similar patient. Ferland et al. [11] reported a retroperitoneal pregnancy in a patient with previous right salpingectomy secondary to an ectopic gestation. Agarwal et al. [21] studied 26 ectopic pregnancies detected after embryo-transfer during a 7-year period and seven were located in the cornual or tubal stump after prior salpingectomy. Four out of seven women were treated with MTX, but in only one case conservative treatment was successful. The other three cases were tubal implantations, with one rupture during treatment. Chang et al. [22] presented a case of bilateral simultaneous tubal sextuplets pregnancy after in-vitro fertilization–embryo transfer following salpingectomy. Chen et al. [13] described three cases of cornual pregnancies occurring after IVF-ET.

Two of these patients had prior bilateral salpingectomy, whereas another had prior tuboplasty for tubal disease. Nabeshima et al. [23] presented the case of a 38-year-old woman, with a history of left salpingectomy for an ectopic pregnancy, admitted for treatment of another presumed ectopic pregnancy. Surgery was performed for a suspected left cornual pregnancy and with laparoscopy the gestational sac was removed; the uterus was preserved. Unilateral and even bilateral salpingectomy cannot prevent subsequent heterotopic pregnancy. Even more catastrophic conditions may occur because the ectopic gestation is always located within the interstitial tubal portion, rather than in the ampullary portion of the fallopian tube [24]. The uterine cornu has an abundant blood supply from branches of the ovarian and uterine arteries and a ruptured cornu can have tragic consequences from sudden and excessive blood loss. For this reason, these pregnancies are generally associated with very high serum HCG levels and the mortality rates for interstitial pregnancy are estimated to be 7-15 times higher than another EP [25].

At the beginning, the traditional treatment for interstitial pregnancy was cornual resection by laparotomy or hysterectomy [26]. In the last decades operative laparoscopy has generally been considered the “gold standard” for the treatment of tubal ectopic pregnancies [27], but medical treatment is viewed with increasing interest. The medical treatment is of particular relevance in the case of infertile patients for whom any avoidance of additional surgical intervention translates into a reduced risk of repeating ectopic pregnancy, in addition to maximal preservation of their future fertility potential. The estimated success rate for medical treatment with methotrexate of interstitial pregnancy is lower than that for treatment of ectopic pregnancies located in the tubal ampulla or isthmus [28]. Although medical therapy can be successful at serum HCG concentrations considerably higher than 3000 IU/l, quality-oflife data suggest that methotrexate is only an attractive option for women with an hCG below 3000 IU/l [29-31].

In 2016, the Royal College of Obstetricians and Gynaecologists (RCOG) released a new guideline providing evidence-based guidance on the diagnosis and management of ectopic pregnancies [32]. Concerning interstitial or cornual pregnancies, it pointed out that even if a pharmacological approach using methotrexate has been shown to be effective, there is insufficient evidence to recommend local or systemic approach. Moreover, RCOG guideline has confirmed the main role of surgery in the management of cornual pregnancy with conservative, laparoscopic or open surgical methods, and it reported medical therapy with methotrexate and potassium chloride injection as an option prior to later laparoscopic horn excision. Nevertheless, an international consensus on the management of cornual or stump pregnancy is still far, as all the evidence reported in the guideline come from non-analytical studies, such as case reports or are based on expert opinion.

Reviewing the literature, we found only one case of tubal stump pregnancy treated successfully with a single i.m. dose of MTX (100 mg) with a serum HCG concentration of 12.470 IU/ml 4]. The presence of cardiac activity in an ectopic pregnancy is associated with a reduced chance of success following medical therapy and should be considered a contraindication to medical treatment [32,33]. Therefore, a similar behavior should be considered for EP of the tubal stump. In conclusion, early transvaginal ultrasound should be considered in women with a history of salpingectomy in order to allow early diagnosis of EP of the tubal stump. Physicians should remember to consider this severe condition when surgically treating conditions such as PID and EP and remove the fallopian tube entirely [34-43].

The authors declare that there is no conflict of interests regarding the publication of this paper.