The shoulder joint contributes towards the movement of the upper limbs; however, it has poor stability and is easily prone to injury [1]. Shoulder injuries are common in overhead athletes, with as many as 44% experiencing shoulder problems and 29% having shoulder pain at some point in their career [2]. The high prevalence of shoulder pain in these athletes is attributed largely to repetitive and excessive stress placed on the shoulder. In this year’s World Baseball Classic, repetitive stress due to more pitching was regarded as a problem and introduced the pitcher use limitation rules.

Scapular dyskinesia is caused by muscle weakness or trunk misalignment [7,8]. On the other hand, fatigue of the shoulder muscles due to repetitive and prolonged overhead sports activity also appears to temporarily alter the scapular kinematics [9-13]. Ebaugh et al. [9] found post-fatigue scapular kinematic alterations, with increased scapular upward rotation and clavicular retraction in the mid ranges of arm elevation. Chopp et al. [11] showed decreased scapular posterior tilting and increased scapular external rotation after a fatiguing task. Thus, previous studies reported that shoulder fatigue leads to scapular dyskinesia and increased mechanical stress; however, to our knowledge, none of them researched fatigue resistance, which is how much fatigue leads to scapular dyskinesia.

Seventeen healthy subjects were recruited in this study. Their mean age was 20.5 ± 0.6 years, mean height was 169.6 ± 4.6cm, and mean body mass was 60.6 ± 5.9kg. No subject had any history of shoulder pain or injuries before participating in this study.

The study was performed in accordance with the World Medical Associations Declaration of Helsinki. The purpose, nature, and potential risks of the experiments were fully explained to the participants, and all participants gave written, informed consent prior to their inclusion in the study. The study protocol was approved by the research ethics committees of the respective affiliated institutes (17-3).

Participants held a dumbbell with their right hand and repeated arm elevation as much as possible in the scapular plane at the elbow extension position; movement from the downward position to the maximum elevated position and the opposite movement was repeated during constant 3-s periods. Repeated arm elevation was continued until either the appearance of compensatory movements, the participants could not fulfill the task within the time or were offered retirement.

Kinematic data were collected during the task using an electromagnetic tracking device, LIBERTY (Polhemus, Vermont, USA), and Motion Monitor software® version 8.43 (Innovative Sports Training., Inc., Chicago, IL). Data were collected at a 120-Hz sampling rate. The global coordinate system was established by a transmitter mounted on a rigid wooden base frame aligned with the cardinal planes of the body. Electromagnetic sensors were attached to the sternum, acromion, and humerus on the right side. The bony landmarks were palpated and digitized while the subject sat on a plastic chair and relaxed the arm to the side of the body. The landmarks were chosen in accordance with the International Society of Biomechanics [15]: the spinous processes of the 7th cervical and 8th thoracic vertebrae, suprasternal notch, and xiphoid process were the thoracic landmarks, the glenohumeral joint rotation center (estimated by the rotation method) and medial and lateral epicondyles were the humeral landmarks, and the acromial angle, root of the spine of the scapula, and the inferior angle were the scapular landmarks. Measurement angles were the scapular upward rotation, scapular posterior tilting, scapular external rotation, arm elevation, and horizontal adduction between the humeral and scapula plane. 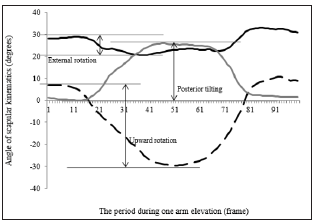 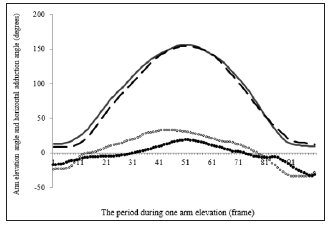 SPSS software for Windows version 24.0 (IBM, Armonk, NY, USA) was used for data analysis. The effects of the conditions (0%, 25%, 50%, 75%, 100%) on scapular upward rotation, posterior tilting, and external rotation were analyzed using a one-way repeated measure analysis of variance (ANOVA). When a significant main effect of the condition was observed, the post-hoc Bonferroni test was used to determine the significant differences. The level of statistical significance was set at p< 0.05.

Table 1: Autocorrelation with the first elevation of the arm elevation and the horizontal adduction.

Figure 2A: Scapular upward rotation. Post-hoc analysis revealed the upward rotation angle to significantly increase at the 100% compared to 0% (*p < 0.05). 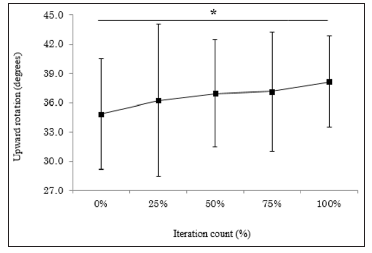 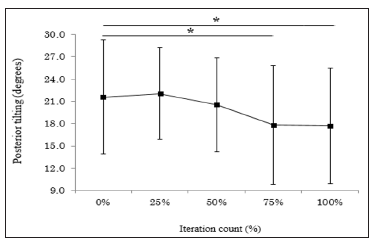 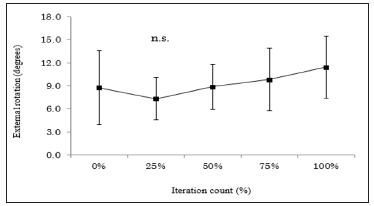 In the present study, we investigated the effect of fatigue resistance on the scapula kinematics by analyzing the kinematics during repeated arm elevation. Our results showed that the degree of shoulder fatigue contributed to the scapular kinematics. The most important findings of this study were that the angle of upward rotation was maintained until 75%, with an increase observed at 100%, and the angle of posterior tilting was maintained until 50%, with a decrease observed after 75%.

Generally, there are many reports suggesting that muscle fatigue affects the muscle activation pattern and scapula kinematics [9,10,16-19]. Szucs et al. [17] showed that higher upper trapezius activation may be compensatory for fatigue in the other shoulder muscles. Joshi et al. [19] investigated the influence of externalrotation fatigue and showed increased scapula upward rotation and decreased lower trapezius activity. However, no researchers have previously measured fatigue resistance, which is how much fatigue leads to scapular dyskinesia. Our results showed that the scapula upward rotation at 100% significantly increased compared to the rotation at 0%. Moreover, it was confirmed by a high autocorrelation of 0.90-0.95 that participants could perform unified arm elevation. It was suggested that muscle fatigue by repeated arm elevation increased the upward rotation, which was maintained until complete exhaustion.

The present study had several limitations. First, our participant sample included young adults who were not athletes; when analyzing the repeated arm elevation, the tendency of scapula kinematics might be different depending on the different sports performed by athletes. Second, we did not perform electromyography during the fatigue protocol, and it was unknown which muscles affected the scapula kinematics. In future studies, the scapula kinematics of more complicated movements, such as the throwing motion, should be investigated. Furthermore, the muscles affecting shoulder kinematics should be clarified. Muscle fatigue by repeated arm elevation resulted in an increased the angle of upward rotation, which was maintained until just before complete exhaustion. A decrease in the posterior tilting angle was observed before (exceeding 50% of the iteration count) the increase in the upward rotation angle. It is suggested that limiting the posterior tilting angle within 50% of the iteration count might be important to prevent scapular dyskinesia caused by muscle fatigue.

The authors would like to thank those who participated in the study.