In 2008 we published a premonitory article for Spanish language readers; almost 5 years later we provide the knowledge and the follow-up of this amazing and gratifying technique [1]. This paper is based in the primary authors after First World War 1914, to date: Weinzenberguer, Thoreck, Passot, Strombeck, Aufricht, Noel, Mckissock, Goulian, Regnault, Perras, Hinderer, Arie, Pitanguy, Peixoto, Ribeiro, Pontes, Fellicio, Benelli, and many other important modern authors like Ceydelli, Graef, Gasperoni, Gulyas, Puckett, Sampaio, Goes, Tariki, etc. Upper areolar incision has always been considered taboo due to fear of areola enhancement, disruption and widening. This super areolar approach has been dismissed [2]. At this time, we present more than 90 evolved cases to date with successful results and grateful standpoints for both patient and surgeon.

The main objective for writing this paper is to highlight an important difference: not only this technique provides a better shape, avoids numbness, and ugly scars, but it is also a preventative method against breast cancer by partially re-sectioning upper external breast-quadrants [3].

There have been great improvements in the last few decades over breast reconstruction [4] (Figures 1 & 2). As you know breast cancer hits primarily in women around the 30 -40 range of age (Figures 3 & 4). And at 40 % at superoexternal quadrant, 30% at superointernal quadrant, 10 to 12% at retroareolar sites, so one of our main proposals in this paper is to assess if being a little more aggressive just in cases of direct inherently predisposition, such as direct line relatives with breast cancer like mother, aunts, sisters, etc., could be attacked, before the cancer is present in order to avoid mutilating surgery [5-8]. That motion could be an invaluable point of sight, from our international society to each promotion of yearly prevention campaign for each national health institution in the fight against breasts cancer. You will note the benefits of the technique [9-12]. 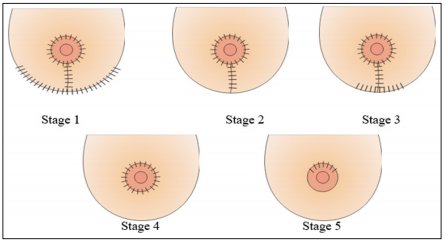 A. Scheme showing in a tangential cutting to show intra bleast. Normal tissue.

B. Scheme Showing First defense of human body to cancer with an axillar ganglion. 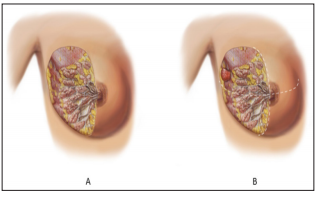 A. Normally Marcks over skin for lifting the breast and areolas.

B. AA.- Normal projection of half clavicle to nipple and submamary folds

94 female patients were operated for this reason from 2004 to 2018. The ages were from 19 to 61 y.o. All of the extracted tissue was sent to pathology in separate ways- right, left and edges. Surprisingly 98% of pathological results showed cystic and micro fibroadenomes, and only in one case, multiple intraductal papilomatosis [13]. Finally, oral or IV anti-coagulation therapy is provided if needed (Figure 5). Mastography was chosen only when the patient had 40 y.o or more, and exceptionally in younger women when direct relatives had been diagnosed with BREAST CA [14]. The key point in these cases is to draw and mark the thoracic key points with patients always standing up, but not sitting down, and previous preparation for this kind of surgery supplying oral ferrum and vit K 50 mgrs ingestion( if needed), 1 week before and after surgery, and besides getting intra operatory at least 3 cc of fresh autoplastma to apply at the end of the surgery, behind and inferiorly of suprareolar incision, and also behind both areolar tissues previously reduced in diameter with the technique that you are going to see on the following explanation, in order to improve quality and speed of wound healing [16-20]. Also of paramount importance is the use of the “soft silicon fastener” around the areola and incision, in order to have the whole new weight and pressure of complex breast-implants, rest over this and not over the wounds (Figures 6 & 7).

A. Hemi moon cutting borders depitelization and. Backing down this dermical flap. To get access. To upper quadrants.

B. Dermis flap. Backing down to areola and resecting a triangle of upper external and uppermedial piece. If necessary taking also retro areolar breast tissue.

C. A hole resulting. To remove the tissues and doing the sub facial cavity for next.

F. Backing up the dermal flap to upper position the pressure tic-over upper wound is avoided tightening the pressure points of soft. External silicone pieces over the dermis flap. Behind the trough 3 - 4 ties. Than let uppers kin free of tension the wound closure. 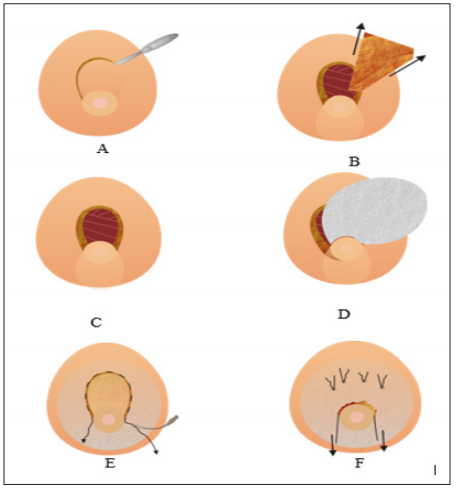 Figure 6: Upper external breasts quadrants and sometimes behind the areola and upper internal quadrants. To be removed.

It should be a triangle where our complex areola- nipple is going to be in a short future, following the vertical lines projections over the middle clavicles points to nipples [21]. Leaving a 5 cm thick distance from nipples to this last cut, in order to respect principal galactophorus ducts, after that we dissect always sub-facially the cavity for preparation to introduce an also 5th generation implant [22-26]. In order to keep the empty breasts filled and looks fine (Figure 8). Each extirpated breast-tissue should be sent to pathology in different receptacles with very clear marking of the side and position it is from [27].

Figure 8: Asymmetrical anomaly congenital breast malposition corrected utilizing one implant bigger than the another one. A and C preoperatory B and D post operatory. 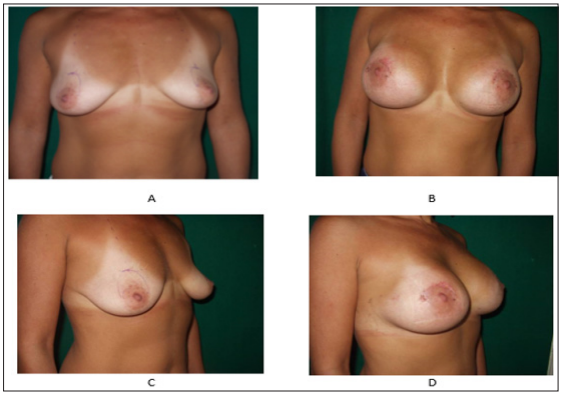 With this experience we see results early, before 1 month, after 6 month and after several years [28-31]. It results in a little discomfort at the beginning with the garment and wound care but finally patients stay quite satisfied and most importantly without recurrence, and may be applied primarily to pre-menopause patients and also celibate patients, besides the technique may be applied to asymmetrical breasts, tuberous, pendulous but not for cancer reconstruction (Figures 9 & 10), 99% of pathological results were cystic fibrous mastopathy bilaterally, only one intraductal multiple papilomatosis unilateral and no in situ ca [32-37]. 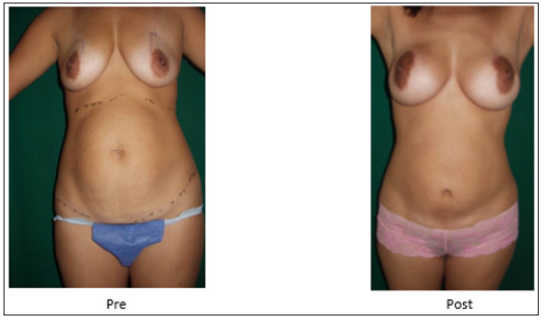 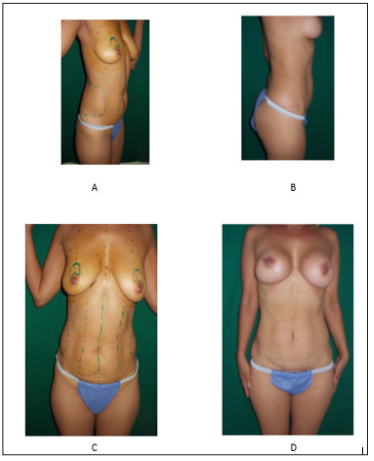 At first cases were getting one partial disruption, two elongated complex areola nipples, some infections, 2 prosthesis reported broken after 4 years later detected trough a tomography, some recurrence, two thick and wider upper areolar scars, some partial or total numbness but to this date from several few years ago none of these previously described complications have occurred [38].

The importance given to this new technique, prevents breast cancer because we eliminate ¾ of upper breasts tissue where normally hits 60% of breast cancer, versatility, security and with excellent results solves at the same time a.-ptosis, b.-flatness, prevents cancer, avoids widening recurrence, and the possibility to execute one or two other procedures at the same time, improves self-confidence, the breasts stay in good position and wonderful shape in young women feeding babies is preserved because we do not touch the principal galactophorus conducts. Besides areolar numbness is avoided by upper incisions rejecting the lateral nerves’ entrance to areolar zones and that is quite important for sexuality [39-40]. It is important to take always into account that most women would not wish big breast implants when they have had a size c before, but it results quite important to explain that it will result in much better shape with a small, 5th generation implant with less volume, less weight and higher projection 5 to 6, and it is only to avoid looking empty or flat after mastopexy [41]. In other words, we are not looking for volume or weight , we are looking for projection with a 200 cc vol (Figures 11 & 12). any 5th generation implants will surely look and feel like 300 cup c by the high projection with a lower weight 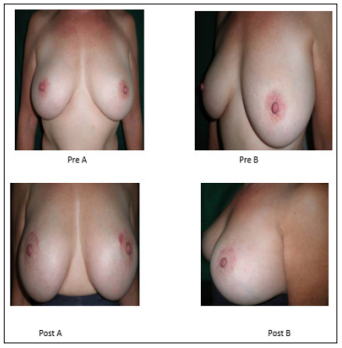 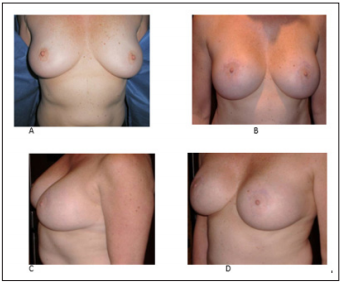