Human Immunodeficiency Virus (HIV) continues to be a major global public health issue. Inhibition of HIV envelope fusion with the CD4 cell membrane prevents the entry of HIV into the CD4 cells providing a novel approach to the treatment of HIV infection. Thus, interference in the fusion of the virus with the co-receptor substrate appears to be a specific and potential way to fight HIV infection and replication. Applications of click chemistry are spreading in the field of drug discovery and it became a powerful tool for the synthesis of medicinally important compounds.

Remarkably, the Cu (I)-Catalyzed Azide-Alkyne Cycloaddition (CuAAC) click chemistry has become a superior approach for the synthesis of privileged medicinal skeletons in the discovery of anti-HIV agents. Click reactions got enormous popularity because of a high degree of reliability, complete specificity (chemoselectivity and regioselectivity) and it employs chemical reactions that are wide in scope, of high yielding and produce very little or no by-products. In this review, we outlined current approaches towards the development of peptide based HIV fusion inhibitors employing click chemistry.

As per the statistics reported by HIV.gov, 36.7 million people worldwide were living with HIV/AIDS and 1.8 million people worldwide became newly infected with HIV in 2016, which averages about 5,000 new infections per day. About 70% of the people living with HIV around the world are aware of their HIV status while the other 30% (estimated 11 million) people are not even aware of their HIV status. In 2016, 39,782 people were diagnosed with HIV in the U.S and more than 1.1 million people in the U.S. alone are living with HIV today. Men's who have sex with men are at higher risk of getting infected by HIV and represents an estimated 26,200 of these new HIV infections. Approximately 1 million people died from AIDS- related illness since 2016 and around 35.0 million people have died since the start of the epidemic [1]. Research laboratories around the globe have been working to understand, diagnose, treat, and prevent HIV and HIV associated conditions [2-4].

Antiretroviral drugs used for the management of HIV/AIDS are categorized into six types depending on the stage of the viral life cycle where they are targeted. They are,

Combination of antiretroviral drugs, referred as Highly Active Antiretroviral Therapy (HAART), which is considered as the most effective treatment model for AIDS. Protease inhibitors and Fusion inhibitors play a very important role in HAART [5,6]. Fusion inhibitors work by blocking the fusion of the HIV envelope with the CD4 cell membrane, thus preventing the entry of HIV into the CD4 cells, which is one of the important stages in the HIV life cycle. This interference of virus fusion with the co-receptor substrate appears to be specific and potentially the best way to interfere with HIV infection and replication. The three entry inhibitors that are currently available are Enfuvirtide-which prevents HIV from entering the CD4 T cell, Ibalizumab-blocks HIV from binding to the CD4 receptor and Maraviroc-blocks HIV from binding to a coreceptor [7].

Click chemistry has emerged as a powerful tool in drug discovery. The term "click chemistry reaction", defined by Nobel laureate KB Sharpless and associates in 2001, [8,9] served as a model reaction for the generation of novel pharmacophores. Compounds containing carbon-heteroatom-carbon bonds (mostly N, O, and S) can be efficiently synthesized by employing click chemistry in an aqueous environment [10-13] Click reactions got enormous popularity because it employs chemical reactions that are wide in scope, of high yielding and produce very little or no by-products. Click chemistry employs the copper (I) catalyzed 1,2,3- triazole formation from azides and terminal acetylenes to yield useful and versatile compounds. Triazole serves as an interesting class of molecule and an active pharmacophore in many biologically active compounds. It exists in two types, the 1,2,3-triazoles, and the 1,2,4-triazoles. Synthesis and biological applications of 1,2,3-triazoles and 1,2,4-tri- azoles have previously been extensively studied [14-16]. In this review, we would like to provide an overview of the application of click chemistry in the development of peptide based HIV Fusion inhibitors.

Cu (1)-catalyzed click chemistry reaction is extensively used chemoselective reaction for drug discovery and investigation of biological function [6]. It is a method of choice for the synthesis of conjugates of small molecules, peptides and proteins [17]. T20 also known as Enfuvirtide is among the well-studied peptide fusion inhibitors and is the first member of the class approved by FDA for clinical use. T1249 and T2635 are other highly potent fusion inhibitors [18]. However, rapid protease degradation, drug resistance, and lengthy sequencing processes are the limitations associated with long-peptide inhibitors. To overcome these limitations, several homodimers, heterodimers of peptides, and non-peptide small molecule fusion inhibitors have been developed by employing click chemistry [19,20]. 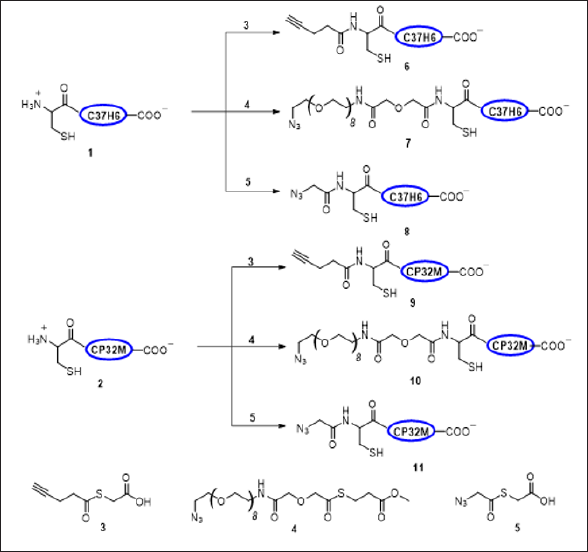 In 2013, Xiao et al. reported a synthesis of homodimers and heterodimers of HIV fusion inhibitor peptides C37H6 and CP32M using a combination of native chemical ligation and CuAAC click chemistry approach [21]. Peptide inhibitors were first produced by recombinant protein expression and then the alkyne and azide groups were introduced into C37H6 and CP32M by native chemical ligation method (Figure 1). The azide and alkyne groups are then subjected to CuAAC click chemistry employing CuSO4 andL-ascorbic acid in denaturing buffer to form protein homodimers or heterodimers with variable linker lengths (Figure 2). Xiao and co-workers also performed the cell-cell fusion inhibition assay on the synthesized homodimers and heterodimers and found that the dimer obtained with a short linker did not demonstrate better antiviral activity compared to the monomers. Whereas the dimers with longer linker were four times more potent than the corresponding monomers. 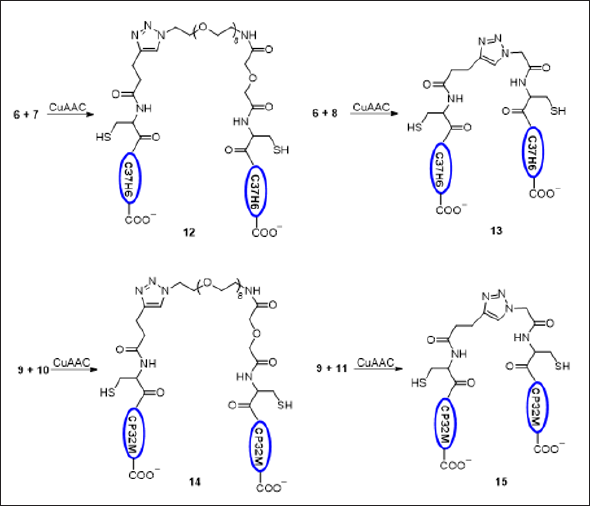 Enfuvirtide has a lengthy sequence of 36 amino acids. Quick protease degradation and drug resistance are some of the problems reported for Enfuvirtide therapy which prompted the development of new generations of C-peptides. To overcome the problems associated with Enfuvirtide in 2016, Liang et al reported several nonpeptide small-molecule fusion inhibitors, which include phenylpyrroles, furan derivatives, and indole-based compounds. These inhibitors show a similar mechanism of action to C-peptides by targeting gp41 N-trimer. However, the main drawback of short peptides is that they adopt random confirmations and lose pharmacological usefulness. To overcome this shortcoming, Liang and co-worker's prepared conjugates of peptide and small molecules that target the gp41 with a synergistic effect. These conjugates showed promising anti-HIV-1 fusion activity, proposing a new method for the development of short-peptide HIV-1 fusion inhibitors.

To develop short peptides such as T26, T22, and T19, the peptide T2635 was considered as a lead compound due to its a-helices stability in solution and reduced into short peptides by eliminating several inessential amino acid residues. The N-terminus of these peptides are coupled with pocket-targeted small molecules through a β-alanine employing click chemistry. Indole derivative of (17) and the N-carboxyphenylpyrrole ligand GLS-22 derivative (19) were considered as small molecules due to their elongated molecule scaffolds and low micromolar EC50 anti-fusion potentials (Figure 3). Based on structure-activity relationship analysis, the methyl ester group on ring D of 16 and the carboxylic acid located at the para position of the phenyl ring of GLS-22 were substituted with propargyl ester. This substituted propargyl ester acts as a conjugated intermediate and linked to T2635-derived peptides through a triazole linkage by using click chemistry (Figure 4). The azide group needed for the conjugation was introduced at the N-terminus of the peptide through acylation with azido acetic acid. This purified azide-peptide coupled with the alkyne of small molecules via click chemistry (CuAAC) to produce T2635 derived peptides.

Figure 3: Structures of small molecule fusion inhibitors and their derivatives. 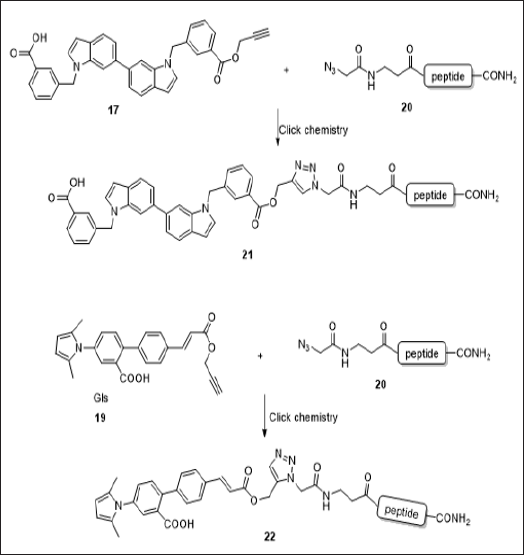 Peptide C34 that has a similar amino acid sequence as that of T20 has shown promising results in fusion inhibition. However, this compound is restricted to laboratory use due to its poor solubility in physiological conditions [22,23]. C34 and T20 both have Helix Zone-Binding Domain (HBD). Previous studies have shown that the HBD exhibited minimal anti-HIV-1 activity and the HBD peptides containing Pocket-Binding Domain (PBD) at N-terminus or a Lipid-Binding Domain (LBD) at C-terminus are more potent than HBD alone [24,25]. Wang et al. reported a design, synthesis and structure-activity relationship of novel HIV-1 fusion inhibitor hybrid molecules in which triterpene sapogenins were used to increase activity of HBD peptides [23]. They speculated that these bioactive natural saponins play an important role as PBD/LBD when added to the N/C -terminus of HBD peptide such as P26. Based on previous studies, triterpene saponins such as betulinic acid, oleanolic acid, and ursolic acid were selected for their synthetic study. The derivatives of these saponin acids containing terminal alkyne moiety were designed and synthesized (not shown here) as one of the intermediates in click coupling reaction with HBD derived P26 peptide (Figure 5). These new hybrid conjugate peptide molecules were tested against HIV-1 Env-mediated cellcell fusion and HIV-1IIIB (subtype B, X4) replication. Among all the conjugates, P26-BApc (28), showed promising anti-HIV-1 activity. 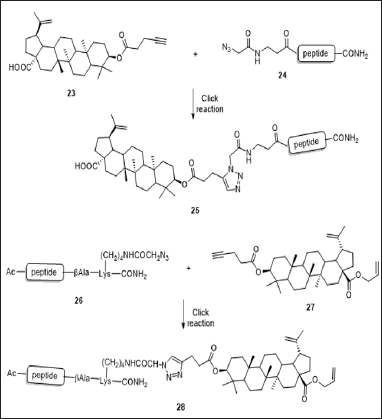