Over the four past decades substantial progress have been made in elucidating the mechanisms by which nerve plasma membranes and cytomembranes are damaged. Nerve cell membrane alterations were earlier described by Bass [1] in Creutzfeldt- Jacob disease. Significant enrichment in cholesterol ester was found by [2] In nerve cell membranes in adrenoleukodystrophy. Disorganization of endoplasmic reticulum cisterns, formation of lamellar bodies, and hypertrophy of Golgi complex were described by Malunova and Samoilov [3] in cat cerebral cortex as early post-anoxic changes. Tissue surrounding hematomas, traumatic lesions, infective zones, and certain tumours undergo autocatalytic peroxidation [4], a lipidic disorder which greatly altered membrane functions. Demyelination-induced plasticity was found by Coria [5] in the nodal and internodal axolemma in rat lead-induced neuropathy. Nuclear membrane indentations were reported by Roos [6] in Huntington’s disease.

Damaged of nerve cell plasma membranes, cytoskeleton, rough and smooth endoplasmic reticulum membranes, lysosomal limiting membrane, and outer and inner mitochondrial membranes have been reported by [41-43] in moderate and severe edema associated to congenital hydrocephalus, brain trauma and brain tumors. Recent studies have suggested that cholesterol, an important component of membranes that controls their physical properties and functions, plays a critical role in neurodegenerative diseases. Enrichment of neuronal plasma membrane with cholesterol protects cortical neurons from apoptosis induced by soluble oligomers of the Abeta (1-40) peptide. Conversely, cholesterol depletion renders cells more vulnerable to the cytotoxic effects of the Abeta soluble oligomers [44]. The binding of Abeta to membrane lipids facilitates Abeta fibrillation, which in turn disturbs the structure and function of membranes, such as membrane fluidity or the formation of ion channels [45].

Thompson [51] demonstrated opening of neuronal gap junction hemichannels following ischemia after stroke. Yi have found an increase in complexing I and complexing II, considered respectively markers of inhibitory and excitatory synapses, after traumatic brain injury. Nitric oxide and its toxic metabolite, peroxynitrite, can inhibit components of the mitochondrial respiratory chain leading to cellular energy deficiency and, eventually, to cell death. Kynurenine metabolic pathway, its alterations and their potential association with cellular energy impair certain neurodegenerative diseases. During energy production, most of the O2 consumed by the mitochondria is reduced fully to water, but 1-2% of the O2 is reduced incompletely to give the superoxide anion O2- If the function of one or more respiratory chain complexes is impaired for any reason, the enhanced production of free radicals further worsens the mitochondrial function by causing oxidative damage to macromolecules, and by opening the mitochondrial permeability transition pores thereby inducing apoptosis [52]. Prion protein (PrP), normally a cell surface protein, has been detected in the cytosol of a subset of neurons. The appearance of PrP in the cytosol could result from either retro-translocation of misfolded PrP from the endoplasmic reticulum (ER) or impaired import of PrP into the ER [53].

Endoplasmic Reticulum Stress and Mitochondria Interplay and the Pathogenesis of Neurodegeneration

Endoplasmic reticulum and mitochondria are in a close communication, establishing a dynamic ER-Ca2+-mitochondria interconnection that can play a prominent role in the neuronal cell death induction under stressful circumstances of Parkinson's disease pathology (PD). Also, endoplasmic reticulum (ER) stress in conjunction with abnormal protein degradation can contribute to the PD pathophysiology, [54]. Endoplasmic reticulum stress, initiated by the accumulation of unfolded or misfolded proteins, activates the unfolded protein response, which adapts cells to the stress. If this adaptive response is insufficient, the unfolded protein response activates an apoptotic program to eliminate the affected cells- Endoplasmic reticulum stress in myelinating cells is important in the pathogenesis of various disorders of myelin, including Charcot-Marie-Tooth disease, Pelizaeus-Merzbacher disease and Vanishing White Matter Disease, as well as in the most common myelin disorder, multiple sclerosis [55].

Amyotrophic lateral sclerosis (ALS) is a devastating neurodegenerative disease characterized by the misfolding and aggregation of distinct proteins in affected tissues, however, the pathogenic cause of disease remains unknown. Recent evidence indicates that endoplasmic reticulum (ER) stress plays a central role in ALS pathogenesis. ER stress activates the unfolded protein response (UPR), a homeostatic response to misfolded proteins. The UPR is initially protective by up-regulation of specific ER stress- regulated genes and inhibition of general protein translation. However, long-term ER stress leads to cell death via apoptotic signaling, thus providing a link to neurodegeneration [56]. a-synuclein pathology and its effects on diverse protein partners and specific cellular pathways in the membrane and/or cytosolic districts, such as endoplasmic reticulum/Golgi, axonal and synaptic compartments of dopaminergic neurons, may cause the onset of neuronal cell dysfunction and degeneration which are among the key pathological features of the Parkinson's disease (PD) brain. Besides, a-synuclein aggregation may induce dysfunction and degeneration of synapses via these multiple mechanisms [57].

According to Hedskog [58], it is well-established that sub compartments of endoplasmic reticulum (ER) are in physical contact with the mitochondria. These lipid raft-like regions of ER are referred to as mitochondria-associated ER membranes (MAMs), and they play an important role in, for example, lipid synthesis, calcium homeostasis, and apoptotic signaling. Perturbation of MAM function has previously been suggested in Alzheimer's disease (AD). Our data suggest an important role of ER-mitochondria contacts and cross-talk in AD pathology.

However, many neuronal functions damaged in Parkinson's disease are regulated by signaling between the endoplasmic reticulum (ER) and mitochondria. This signaling involves close physical associations between the two organelles that are mediated by binding of the integral ER protein vesicle-associated membrane protein-associated protein B (VAPB) to the outer mitochondrial membrane protein, protein tyrosine phosphatase-interacting protein 51 (PTPIP51). VAPB and PTPIP51 thus act as a scaffold to tether the two organelles. a-synuclein induced loosening of ER-mitochondria contacts is accompanied by disruption to Ca2+ exchange between the two organelles and mitochondrial ATP production. Such disruptions are likely to be particularly damaging to neurons that are heavily dependent on correct Ca2+ signaling and ATP [60].

The Role of Calcium Overload

Potentially toxic cytoplasmic calcium concentrations can also occur due to release from internal stores, either through physical damage to mitochondria and the endoplasmic reticulum, or a malfunction of receptors and channels present in their membranes. Such increases of cytoplasmic calcium concentrations can trigger a range of downstream neurotoxic cascades, including the uncoupling mitochondrial electron transfer from ATP synthesis, and the activation and overstimulation of enzymes such as calpains and other proteases, protein kinases, nitric oxide synthase (NOS), calcineurin and endonucleases [61].

Autophagy and apoptosis are basic physiologic processes contributing to the maintenance of cellular homeostasis. Autophagy encompasses pathways that target long-lived cytosolic proteins and damaged organelles. It involves a sequential set of events including double membrane formation, elongation, vesicle maturation and finally delivery of the targeted materials to the lysosome. Deregulation of autophagy plays a pivotal role in the etiology and/ or progress of many neurodegenerative disorders [62]. Neurons employ specialized mechanisms to modulate local gene expression in dendrites, via the dynamic regulation of micro RNA biogenesis factors at intracellular membranes of the endoplasmic reticulum, which in turn is crucial for neuronal dendrite complexity and therefore neuronal circuit formation and function. 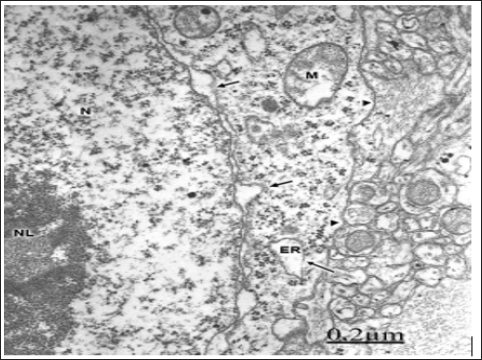 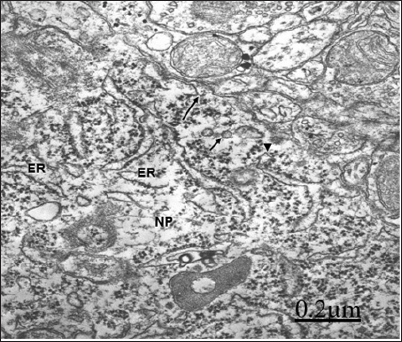 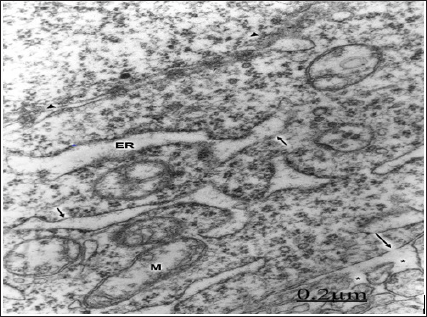 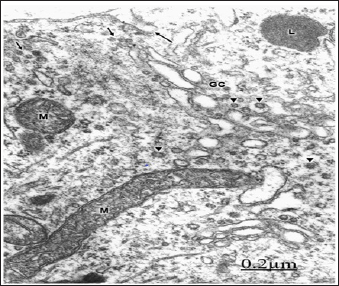 The plasma membrane shows deep invaginations and formation of numerous endocytic vesicles directed toward the endoplasmic reticulum and the Golgi apparatus [68]. The lysosomes show fragmented limiting membrane (Figure 4). In congenital hydrocephalus in neonate patients we are dealing with immature plasma membranes, characterized by changes in the integral membrane proteins, cholesterol domains, and in certain carbohydrates residues and anionic sites [69]. These different molecular compositions of immature plasma membranes explain its high sensitivity to injury factors. In hypertensive congenital hydrocephalus, the pressure exerted by the non-circulating cerebrospinal fluid induces plasma membrane fragmentation, and enlargement of intracellular nerve cell compartments. In addition, the presence of oedematous mitochondria evinces a disturbed energy metabolism.

Endocytosis is a fundamental mechanism by which neurons control intercellular signal, nutrient uptake, and synaptic transmission [70]. Clathrin-coated vesicles of different sizes have been isolated from rat brain, and related with the content of Na+, K (+)- ATPase, as a mechanism of Cl- uptake [71], as pathways for endocytosis of neural cell adhesion molecules (NCAM) [72], and for receptor-mediated vesicular transport [73], such as internalization of metabotropic glutamate receptors [74]. 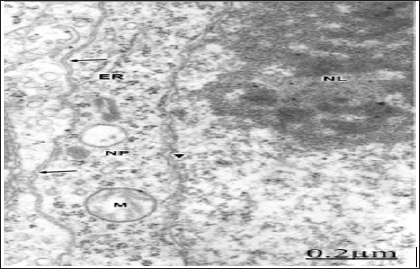 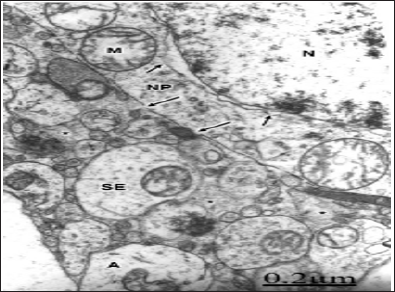 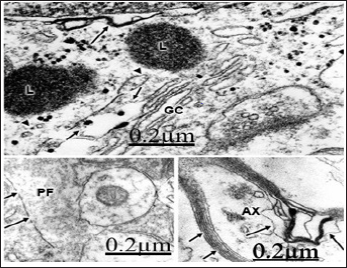 The Damage of Astrocyte Membranes 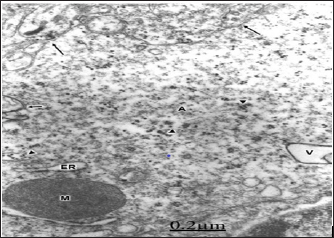 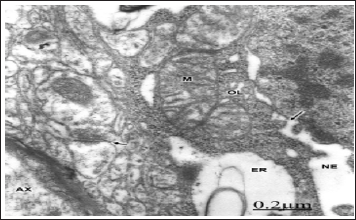 Peroxidative stress has been implicated in mechanism leading to neuronal cell injury [88-91]. One source of free radicals in ischemic cells is arachidonic acid released by membrane phospholipids under the action of Ca2+ activated phospholipase A2 [92]. Several oxygen radical species besides superoxide radicals are produced following hypoxia. Superoxide radicals have been shown to change phospholipid and protein structure. Hydroxyl radicals are the most reactive and are known to initiate lipid peroxidation and protein oxidation [93,94]. 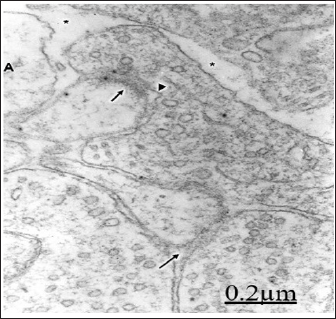 The hydrocephalic or interstitial clear edema, the hematogenous edema fluid in traumatic brain injuries, and the proteinaceous edema fluid in brain tumors accumulated in the dilated extracellular space of cerebral cortex neuropil induce swelling and shrinkage of pre- and postsynaptic structures, increased amount of presynap- tic axoplasmic granular substance, and clumping, enlargement and depletion of synaptic vesicles, and filamentous hypertrophy of pre- synaptic endings (Figure 12). Disappearance of synaptic densities is evident in some cases. In severe brain edema, swollen and shrunken presynaptic endings with discontinuous limiting plasma appear separated from the postsynaptic structures and detached from the glial ensheathment expressing synaptic disassembly. Phagocytosis of isolated presynaptic endings, and of the entire synaptic contacts by astrocytes, microglial cells, and by non-nervous invading cells, such as monocytes and macrophages, are frequently observed [97]. 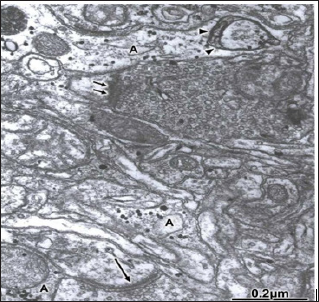 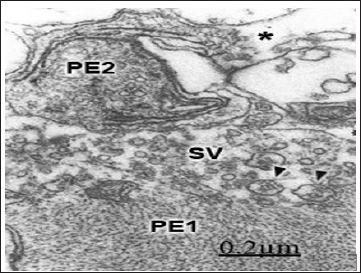 The Damage of Interastrocytary Gap Junctions

Disruption and disassembly of interastrocytary gap junctions have been observed by us in human edematous cerebral cortex of patients with traumatic brain injuries and brain tumors [98] (Figure 13). 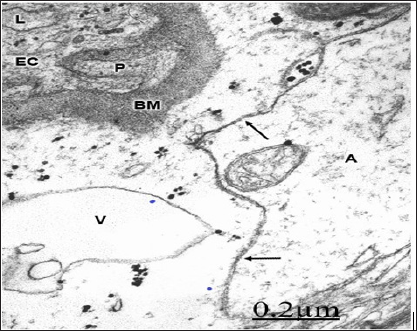 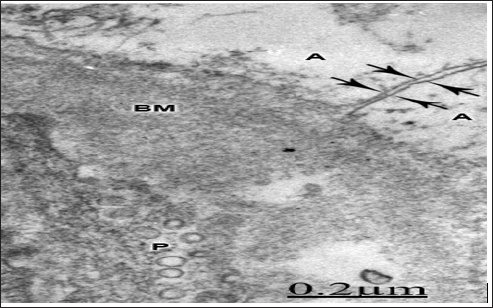 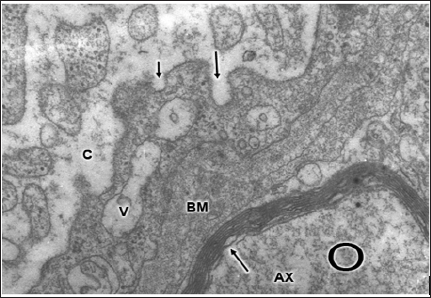 The Activity of Endothelial Cell Luminal Membrane of Cerebral Capillaries

This paper was carried out through the logistic support of Biological Research Institute. Faculty of Medicine. Zulia University and Castejon Foundation.