There has been proven and established relationship between thrombosis and cancer, though the pathophysiological mechanisms remains poorly understood. Numerous studies have shown that cancer multiplies the risk of venous thromboembolism [VTE] by manifold [1]. Cancer increases the risk of thromboembolic syndromes by causing alterations in blood flow; compression of blood flow or invasion of blood vessels by the tumor; activation of coagulation through interactions with platelets, clotting factors and the fibrinolytic system; immobility due to cancer related debility; or endothelial damage due to chemotherapy [2]. Approximately 15% of all cancer patients will develop thromboembolic syndrome, which is the second leading cause of death in cancer patients [3] and thromboembolic episodes have shown an increase in presence of higher age, medical co-morbidities, immobilization, surgery etc [4]. Patients with thromboembolism, at or just preceding cancer diagnosis, had more advanced disease and lower survival when compared to cancer patients without prior history of thromboembolism [5].

There is substantial biological heterogeneity among various types of cancers, VTE may not be associated with increased rates of death for all cancers. Compression stockings, electrical calf stimulation, intermittent pneumatic compression devices, and venous foot pump devices are used for mechanical thromboprophylaxis. Low molecular weight heparin most frequently used pharmacologic agents as a treatment modality for VTE [6]. Effective prophylaxis and good treatment of VTE has reduced mortality and morbidity, with improved quality of life. Low-molecular-weight heparin [LMWH] is the preferred means for prophylaxis and treatment of VTE. It has largely replaced unfractionated heparin [UFH] and vitamin K antagonists [VKAs] [7]. We conducted a retrospective study to evaluate the incidence of venous thromboembolism in Indian cancer patients and its effect on the overall survival.

Study of retrospective nature including all adult cancer patients presenting to the oncology ward or day care center at HCG cancer Hospital at Bangalore for diagnosis or treatment of cancer. Adults [>18 years] participants were considered eligible if they received treatment between June, 2010 and August, 2018. They should have initiated and completed all treatment at HCG Hospitals while maintaining a follow-up of atleast 3months post completion of treatment or until death, whichever came first. Excluded were those on anti-platelets agents or anticoagulants, with a previous history of DVT or PE [self-reported], known pro-thrombotic disorders or hypercoagulable states.

Cancer patients treated in inpatient or daycare wards were identified through the discharge summaries and ultrasound reports. 96 eligible patients were included. Medical records were reviewed for demographic and clinical data. Radiological investigations for the study population were also reviewed to make sure that no cases of VTE are missed. Other parameters such as upper limb thrombosis, lower limb thrombosis and if prior prophylaxis were received was also noted. The date of diagnosis of VTE and last date of follow-up or up to death were considered for evaluation of overall survival. An exemption from institutional review board [Ethics and scientific committee] was obtained because these data were analyzed without the use of personal identifiers. Since no patients were contacted in this study, informed patient consent was not required.

We identified 96 patients with diagnosis of 14 common cancers ranging from head and neck cancers to melanomas of the lower limb with concomitant diagnosis of DVT. Upper limb and lower limb DVTs were seen in 17 patients [17.71%] and 76 patients [79.71%] of patients respectively. No significant co-relation was noted to Venous thromboembolic episodes to Age, Sex, Medical co-morbidities, habits [Smoking, tobacco chewing and alcohol intake] and the diagnosis but there was a significant trend showing that DVT was prominent in advanced stages and in metastatic disease [P<0.05] and patients who have undergone chemotherapy, surgery and radiation had an higher risk of both upper and lower limb venous thromboembolic episodes ,though not significant statistically[P<0.03].Early and prompt primary prophylaxis post diagnosis of DVTs proved to improve survival in the above study. Out of the total 96 patients enrolled into the study, 24 events [Deaths] were observed with a mean survival of 4.5±0.29 years (Tables 1& 2) and (Figure 1). 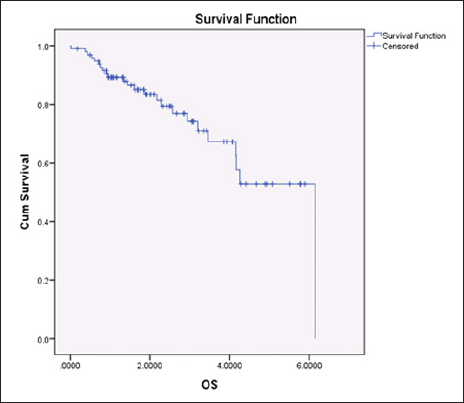 This study used Indian cancer based data to estimate the incidence, time course of venous thromboembolism among patients with cancer. The presence of venous thromboembolism was seen as a significant predictor of death for all cancer types analyzed, and this was true for patients with localized, regional, or metastatic- stage disease. These findings identify potential populations that might be considered for thromboprophylaxis and in-turn improve the outcomes of cancer patients diagnosed with VTE's.