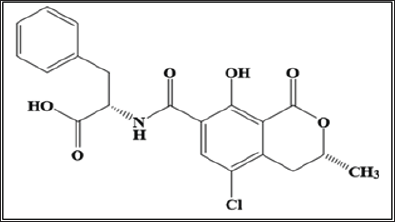 Mycotoxins are the secondary metabolites, which are produced by the several fungal species belonging to the family of Aspergillus, Fusarium, Penicillum [1,2]. Among them, the Aspergillus ochraceus and Penicillium citrinum are the main producers of ochratoxin A (OTA), which is the most widely occurring fungal toxin. Biosynthetically, OTA is the pentaketide derived from the dihydrocoumarins coupled to β-phenylalanine i.e. (S)-2-((R)-5- chloro-8-hydroxy-3-methyl-1-oxoisochroman-7-carboxamido)-3 phenylpropanoic acid (Figure 1) and as contaminant, present in the varieties of foodstuffs and beverages such as cereals, spices, wine grapes [3,4]. The presence of OTA in animal tissue, human blood and milk increases the risk of nephrotoxicity, immunosuppressant, teratogenicity [5,6]. Recently, the International Agency for Research on Cancer (IARC) has been classified the OTA in group 2B (possible carcinogenic agent in human). The maximum residue limit (MRL) for OTA has been set by the European Community in several foodstuffs such as the MRL of OTA in wine is 2μg kg -1 or 5μg kg'1 in unprocessed cereal (European Commission 2006 [7]).

Moreover, due to the chronic cases and occurrence of OTA incidences and exposure from contaminated food, there is a need to develop a faster, sensitive, robust and portable method for quantification of OTA. Chromatographic methods, such as high-performance liquid chromatography [8] and thin-layer chromatography [9], are the mainly used for OTA determination. Recently, the advancement in OTA detection methods is based on electropolymerization [10], surface plasmon resonance [11] aptasensors [12,13] utilizing electrochemical and fluorescence- based signal generating principle. Among all, the fluorescence based detection methods gained significant attention due to the ease of reaction, label free detection, diverse measurement methods [14]. The intrinsic fluorescence emission behavior, intensity and sensitivity of the analytical method strongly depends on solution composition, such as concentration and buffer ions, pH of solvent, aqueous-organic phase ratio, temperature etc [14]. Based on the above assumption, in the present work the focus of study was to quantify the effect of pH, solvent composition and temperature variables on the fluorescence emission behavior of OTA by exploration of designing a field portable fluorescence measuring platform. The present results strongly suggested the potential of designed instrument as a portable and affordable cost- effective system for rapid screening and quantification of OTA in real samples. Based on our results, as a generalized fluorescence measuring platform, the proposed platform can be further employed for other target analyte poses fluorescence behavior or in fluorescence-based sensing platforms.

Phosphate buffered saline (PBS) was prepared be dissolving appropriate amount of 1.44g Na2HPO4, 0.24g KH2PO4 containing 8g NaCl, 0.2g KCl in deionized Milli-Q water. The pH of the buffer was adjusted to 7.4. Similarly, the HEPES binding buffer (HBB, 50mM) was prepared by dissolving appropriate amount of HEPES salt containing 5mM MgCl2, 120mM NaCl and 5mM KCl. The pH of the buffer was adjusted from 6.8 to 8.2. For HPLC, a mixture of acetonitrile/water/acetic acid (48/51/1) sonicated for 20 minutes was used. A stock standard stock solution of OTA was prepared by dissolving 1 mg of pure crystalline OTA in methanol at a concentration of 1 mg L-1. For working solution, the OTA stock was further diluted in different solvent before fluorescence measurements.

The developed device based on a bracket designed to allocate the sensing module, the serial port camera module and the cuvette into the chamber was used in the proposed work. Polymethylmethacrylate (PMMA) cuvette holder was used for holding cuvette for photometric measurements in the ultraviolet (UV) range. The cuvette outer dimensions are 12.5*12.5*45mm; one hole for the light emitter was drilled into black poly methyl methacrylate cuvette holder at 900 from the serial port camera module as illustrated in the (Figure 2) The developed system comprises:

Figure 2: Sensing module connected to the final device and its control with the computer. 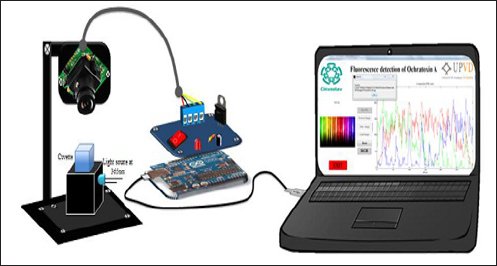 The serial port camera module captures high resolution pictures and transmits over a serial TTL interface, which captures JPEG (Joint Photographic Experts Group) images with a CMOS sensor from a serial port with communication via UART. The sensing camera required, 5VDC power supply with a low current consumption of 80 to 100mA. The ultraviolet emitter produces high power light with an emission peak at 365nm with 2.7 mW of radiant power. The concentration of the ochratoxin A was determined by exciting UV light. LED voltage regulator (LM317) that is powered by a constant current through the USB port of Arduino UNO was used as power source. The circuit was designed and placed in an electrolytic plate with dimensions of 30x20 mm.

A graphical interface was created in MATLAB R2011a. The developed platform facilitates the acquisition of the data generated by the emission of light and allows a first analysis of data with a choice for automatic file saving for further processing and comparison studies.

The fluorescence emission from the excited sample passes through a lens, to a serial port camera module controlled by the computer. Fluorescence image data from the serial port camera module are analyzed by application software. Images with two dimensions such as photograph captured by optical devices like cameras are considered digital images, which are a numeric representation of a two-dimensional image. The digital image contains a fixed number of rows and columns of pixels. Each pixel is specified by three values for the red, blue and green components of the pixel array. The position of the pixel is described by a pair of coordinates (xi,xj), which indicate the intensity of the pixel (x,y) in the red, green and blue (RGB) component.

Effect of Porogen (Solvent) on Fluorescence Intensity: To study the effect of solvent on the fluorescence behavior of OTA, a 20 ng L-1 OTA concentration was prepared in different solvent such as methanol, ethanol, PBS buffer, acetonitrile, distilled water (Millipore filtered), mobile phase (for HPLC), tap water and HEPES buffer. Similarly, blank was prepared without spiking OTA in the different solvents. Then, 1 mL of volume from each composition was transferred into cuvette and inserted in the chamber for fluorescence measurement. The ultraviolet led excited the sample and the serial port camera module captures the image when the interface design was executed. With the option multiples images, its RGB values, the image to JPEG format and the mean of the RGB components in a text file were obtained automatically and the results were saved. 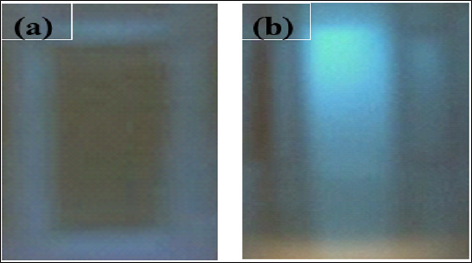 Effect of PH on Fluorescence Intensity of OTA: In solution, the OTA shows a pH dependent fluorescence behavior due to the presence of acidic and basic functional entities in OTA structure, which greatly influence by its protonation state [3]. It was observed in the Figure 5a, that fluorescence intensity increase with increase pH of HEPES buffer from 6.8 to 7.2 and equilibrated. No further increase in fluorescence intensity was observed with further increase in pH. The maximum fluorescence response was recorded at pH 7.2. Indeed, the increase in pH shifts the environment from acidic to alkaline, which results in the hydrolysis of lactone ring causing ring opening [16,2]. Thus, the obtained result limits the analysis of OTA at high pH that will lead to negative analysis [20]. 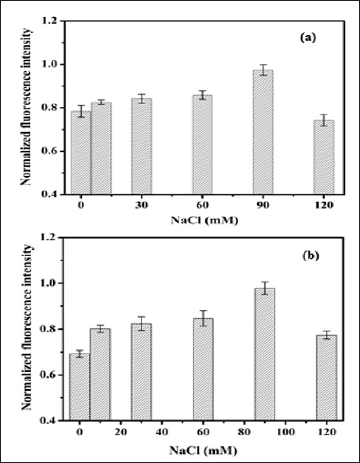 Comparative Study With Fluoroskan Microplate Reader: Under optimized conditions, the result obtained from the developing fluorescence imaging system was compared against the results from commonly used fluoroskan microplate reader. As shown in the Figures 4b, 5b & 6b, the developed system showed the similar type of results comparing to the microplate reader. The obtained results strongly suggested that the developed system has significant potential in fluorescence imaging. The proposed system can be further employed in analysis of the target molecule on the basis of fluorescence intensity calculation considering the blue component of RGB diagram [22,23].

Authors declare no conflict of interest.