The immune system is known to be involved in the etiology as well as pathophysiological mechanisms of many diseases Traditional medicine gives emphasis on promotion of health a concept of strengthening host defenses against different diseases. Rasayana plants are particularly recommended for the treatment of immune disorder, Ayurveda may play an important role in modern health care, particularly where satisfactory treatment is not available. Development of agents, capable of moving patient's immune system from a state of immune deficiency to normal function, would be able to significant impact on patient's disease condition. Such agent would not be a cure but would control the manifestation and course of disease. Natural Products, especially from plants, have been used for the treatment of various diseases for thousands of years.

Countries such as China, Egypt, India, Greece and Sri Lanka have practiced the use of herbs as medicines from ancient times and an impressive number of modern drugs have been developed from them. Natural products serve as one source of structurally novel chemicals and are expected to be fruitful for investigation in medicine. Balloon vine plant (botanical name: Cardiospermum Halicacabum) has various pharmacological actions like antioxidant, anti-viral, anti-diabetic, anti-convulsing, anti-diarrheal, anticancer, fertility, anti-bacterial, anti-fungal, and etc. Due to the presence of constituents such as beta-sitosterol and its D-glucoside, an alkaloid, oxalic acid, amino acids, saponin, quebrachitol, erucic acid, oleic acid, eicosonic acid, octanoic acid, n-hexadecanoic acid and rich in tri-terpenoids, therefore these herbs could be valuable for the development of commercial drugs.

An immune modulator is referred as a, biological or synthetic substance which can encourage, suppress or modulate any of the components of the immune system including both innate and adaptive arms of the immune response. Immune system is a remarkably sophisticated defense system within vertebrates, to protect them from invading agents [1]. Modulation of the immune system denotes to any change in the immune response that can involve induction, expression, amplification or inhibition of any part or phase of the immune response. Thus, immune modulator is a substance used for its effect on the immune system. There are generally of two types of immunomodulators based on their effects: immune suppressants and immune stimulators. A substance which enhances the body's immune response to an antigen is known as immunological adjutants to boost the immune response to the vaccine constituents [2]. For instance, a plant origin saponin is used in veterinary medicine. Whereas, the nonspecific immunostimulators offer a generalized state of resistance to pathogens or tumors. Fungal product cyclosporine selectively blocks the function of T lymphocyte and prevent graft rejection [3]. The concept of immunomodulation relates to nonspecific activation of the function and efficiency of macrophages, granulocytes, complement, naturalkiller cells and lymphocytes and also to the production of various effectors molecules generated by activated cells.

It is expected that these nonspecific effects give protection against different pathogens including bacteria, viruses, fungi etc. and constitute an alternative to conventional chemotherapy [4]. The world we live is full of microbes. Our body temperature and wealth of nutrients provide an ideal home for these micro-organisms to thrive. The human immune system has the essential role that protecting the body against the damaging effects of microbial agents that are pathogenic [5]. The system comprises innate (nonspecific) and acquired (specific) immunity. Natural killer (NK) cells complement system, macrophages, antigen presenting cells (APCs) and neutrophils make up the innate immune system and mount an immediate non-specific response to foreign microbial agents. If microbes by-pass this primary defense, the acquired immune response, comprising humoral and cell mediated components, will then act to contain the invaders [6]. The type of antigen (fungi, virus, bacteria, and toxin) processed and presented by APCs to the CD4+ T cell determines the type of cytokines secreted, which in turn, determine the differentiation of helper T (TH) cells into TH1 or TH2 cells and B-cells to give immunoglobulin subtypes. TH1 will response to activation of macrophages, which contain and destroy mycobacteria and fungal pathogens. TH1 pathway also activates cell-mediated immunity. TH2 cells, conversely, effect immunoglobulin differentiation and antibody secretion, and therefore mediate humoral immunity. CD8+ cytotoxic T cells induce apoptosis in antigen-laden cells [7].

Balloon vine, also known as Cardiospermum Halicacabum (botanically). It has swollen seedpod that not only makes it hollow, but also extremely lightweight. This herb is an annual climbing plant that grows perennially, belongs to the family Sapindaceae [8] (Figure 1). 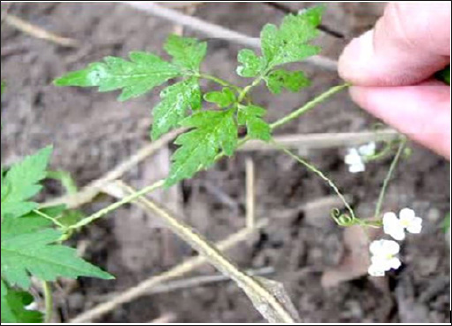 The plant is a climber and has many branches. This plant is a slender herbaceous, more or less hairy, with their vine measuring 1 to 3 meters in length. The stem is approximately 3mm thick, but it can reach a height of up to 2 meters. The stem forms internodes between 5 to 10cm lengths [10]. The long stem carries vary double triad leaves that 3 to 5cm long, which are hairless or covered in a soft down of hairs. The leaves are trifoliate and 5 to 9cm long. The leaflets are ovate to lanceolate and 1 to 5 cm long, with coarsely toothed or lobed margins [11]. The tiny radiate flowers are white, standing in rolls on long flower stems of 5 to 10 cm in length. The perianth consists of 4 to 5 egg-shaped sepals and four petals with banner or wing-like fine combs [12]. There are 8 anthers. Immediately beneath the flower stalks are 2 cm long tendrils, usually in pairs. The fruit is inflated, ob-ovoid, 1.5 to 2.5 cm long, triangular and three keeled. The seeds are black and rounded with a prominent white heart shaped aril at the base [13]. The seed coat is black, opaque, smooth, thick and very hard with a white finely porous, chordate spot at the micro Pyle. The plant is found all over the plains of India in the temperate climate [14].

The study was designed to investigate the glucose up take of (anti-diabetic activity) crude n-hexane, ethanol, methanol and aqueous leaf extracts of Cardiospermum Halicacabum. In suggests that, methonolic extract has significant that can to suppress on glucose diffusion in vitro thus validating the traditional claim of the plant [17].

The anti-arthritic effect of oral administration of ethanolic extract of Cardiospermum Halicacabum leaves (CEE) at the dose of 125 mg/kg and 250 mg/kg on Freund's complete adjuvant (FCA) induced arthritis has been studied in rats. The investigated result showed that the extract inhibited the FCA induced arthritis in a dose dependent manner and this effect was more significant (p<0.001) with 250 mg/kg dose. The results suggest that the ethanolic extract of Cardiospermum Halicacabum leaves exhibits significant anti- arthritic effect [18].

The study was to evaluate the anticonvulsant effects of alcoholic root extract of Cardiospermum Halicacabum L., Sapindaceae (ARECH), on the various murine models of epilepsy. The root extract of the plant was administered to male Swiss albino mice at doses of 30, 100 and 300 mg/kg before evaluation. ARECH at doses of 100 and 300 mg/kg significantly delayed the onset of clonus and tonus in pentylenetetrazol, isoniazid and picrotoxin-induced convulsions. These results suggested that ARECH possesses a significant anticonvulsant activity with a low motor toxicity profile [19].

Anti-diarrheal activity of leaf extracts of Cardiospermum Halicacabum and Dodonea viscosa in different experimental models of diarrhea. The alcoholic and aqueous extracts of Cardiospermum Halicacabum and Dodonea viscosa have exhibited the dose dependant antidiarrhoeal activity in all the three experimental models by reducing the frequency of defecation as well as total weight of wet faeces, decreased the propulsion of charcoal meal through the gastrointestinal tract and also decrease in the edema volume in the intestine (intestinal secretion) of the drug treated animals with the respective models of diarrhea. Cardiospermum Halicacabum and Dodonea viscosa are having potential to develop as aphytomedicine for diarrhea [20].

Aqueous extraction of Cardiospermum Halicacabum leaves increased fertility in male rats through increasing sperm motility, sperm count in a dose dependent manner, and this may be due to increased testosterone levels in the serum. Aqueous leaf extract also increased the number of females impregnated, number of implantations, and number of viable fetuses while decreasing the total number of resorption sites in the pregnant females. It also possesses a significant hepato-protective effect indicating negative side effects. The increased fertility may be adduced to antioxidant activity due to flavonoids and increase in serum testosterone level, which may be due to saponin components [21].

The leaves contain beta-sitosterol and its D-glucoside, an alkaloid, oxalic acid and amino acids. The presence of a saponin and quebrachitol is reported in the plant. The seed oil have erucic acid 43%, oleic acid 30%, eicosonic acid 12%, octanoic acid 4.57% and n-hexadecanoic acid 4.15% and rich in tri terpenoids.

Allopathic drugs are available for counteracting the oxidative stress and hence improve immunity, but the side effects and prohibitive cost of these allopathic drugs makes it necessary to search for an alternative. The Ayurvedic system of medicines not only provides that alternative, but also scores over the side effects and cost factor of allopathic medicine Immunomodulators are becoming very popular. It can be concluded that herbals/botanicals have usefulness in the treatment of disease like immunomodulator or which may develops to other immune disorders. Traditional medicine has profile to the extent in drug development from natural source is concerned. Cardiospermum Halicacabum consist various pharmacological actions has been scientifically proved by in-vitro. Furthermore, Cardiospermum Halicacabum herbal plant suggested to acts as a lead compound for development of economical, effective and nontoxic immunomodulatory agent.

The authority of Department of Botany, Faculty of Sciences, University of Peradeniya, Sri Lanka is thanked, for providing necessary facilities to write this review article.