Production of taxwomen A (TXT), a nitrated dipeptide which inhibits cellulose synthesis in expanding plant tissue, is regarded as the major pathogenicity determinant in Streptomyces scabies, the most widely studied pathogen causing scab disease in economically important crops such as potato. It is known that TXT biosynthetic genes txtA, txtB, txtC and their regulator txtR are clustered together on the pathogenicity island (PAI) of the genome of S. scabies and are conserved in TXT-producing Streptomyces spp. including S. scabies. Here we reported an efficient method to establish the knock-out mutant of txtB (txtBA), by using intergeneric conjugal transfer system constituting Escherichia coli ET12567 /pUZ8002, S. scabies and the vector pKC1139. Briefly, a txtB gene-specific deletion cassette was constructed by PCR and long multiple fusion (LMF), which was subcloned into the Streptomyces-E. coli shuttle vector pKC1139, generating pKC1139-x. By mixing the donor E.coli ET12567 /pUZ8002/ pKC1139-x and the recipient S. scabies at the suitable condition, the exconjugants were successfully obtained and verified by colony PCR. Subsequently, TXT was analyzed for the knock-out mutant (txtBA) in comparison to wild-type of S. scabies. In addition, the transcriptional levels of txtB were studied between the two genotypes. Altogether, txtB gene was successfully knocked out in the exconjugants obtained herein. This would lay a foundation for studying the TXT-biosynthesis associated genes and pathogenicity in scab-causing plant pathogen, facilitating the mechanistic elucidation of plant- pathogen interactions.

Omnipresent in marine and terrestrial habitats, streptomycetes are prolific producers of diverse bioactive metabolites and thus of pharmaceutical and agricultural significance. In spite of a multitude of Streptomyces species characterized to date, only a handful of them are pathogenic to eukaryotic organisms including plants and animals. Among these pathogens, phytopathogens Streptomyces scabies, S. acidiscabies, S. turgidiscabie, draw much research interests because they are known causal agents of common scab diseases in potatoes and other tuber crops such as carrots. The production of phytotoxin thaxtomin A (TXT), an inhibitor of plant cellulose biosynthesis, is regarded to contribute to their pathogenicity [1-3]. TXT has been demonstrated to induce plant cell hypertrophy in expanding tissues. Globally distributed common scab pathogens are represented by S. scabies, the first documented species causing scabs on potatoes [4]. The TXT biosynthetic genes are highly conserved across plant- pathogenic streptomycetes and are found on a pathogenicity island (PAI) that is mobilized among soil-borne streptomycetes, which is considered to be the predominant reason for the emergence of new scab-causing Streptomyces spp [1,5].

To explore and develop the feasible measures to control the rapid spreading of pathogenic streptomycetes in the ecosystem, the molecular mechanism underlying the TXT biosynthesis pathway and the regulation thereof need to be clarified. In this paper we presented an efficient method to establish the knock-out mutant of txtB (txtBA), by using intergeneric conjugal transfer system, consisting of Escherichia coli ET12567 /pUZ8002, S. scabies and the shuttle vector pKC1139. Our study would help deepen the understandings about the mechanism of S. scabies pathogenicity and virulence, thereby providing insight into the elucidation of plant-pathogen interactions.

Deletion of the txtB Gene

Intergeneric Conjugation and Identification of Exconju- gants: The donor cells of E. coli ET12567 /pUZ8002 containing pKC1139-1 were grown to an OD600 of 0.4-0.6 with the appropriate antibiotics. MS medium (mannitol 20g L-1, soya flour 20g L-1) containing 10mM MgCl2 and TSB medium were used for plating of E. coli/Streptomyces scabies in intergeneric conjugation and the efficiency of conjugation was evaluated between MS and TSB. The conjugation plates were incubated at 28 °C for 16-20h, and subsequently overlaid with 1.5mL of sterile water containing 500μg mL-1 nalidixic acid and 1000μg mL-1 thiostrepton, which were incubated further for 10-12d, until the exconjugants emerged. ApraR (100μg mL-1) exconjugants were screened for CmS (25μg mL-1), indicating a double-crossover allelic exchange in S. scabies, and were subsequently verified by colony PCR.

TXT Extraction and Assay: S. scabies cultures of wildtype and mutant were grown for 8 d and cells were pelleted by centrifugation (10000xg). The supernatants were extracted with ethyl acetate, followed by evaporation, and the residues were dissolved in methanol, and analyzed for the presence of TXT using an Agilent 1200 HPLC (Agilent Technologies, CA, USA) on a C-18 reversed-phase(RP) column eluting with a gradient series of 20% to 100% methanol in water as the mobile phase.

Construction of the Plasmid pKC1139-x for Gene KnockOut

We aimed to construct a pKC1139-based vector, designated pKC1139-x, which carried gene-specific homologous upstream and downstream arms for knock-out purpose (Figure 1). By PCR amplification, the txtB gene-specific upstream and downstream fragments [homologous arms, (Figure 2a)] and the tsr, a thiostrepton resistance marker (Figure 2b), were obtained respectively. The individual band was purified using DNA gel extraction kit for further use. 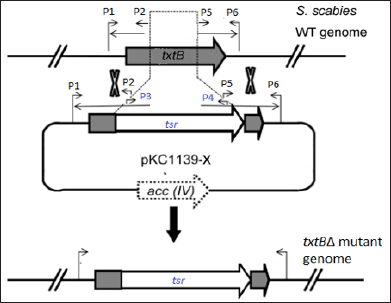 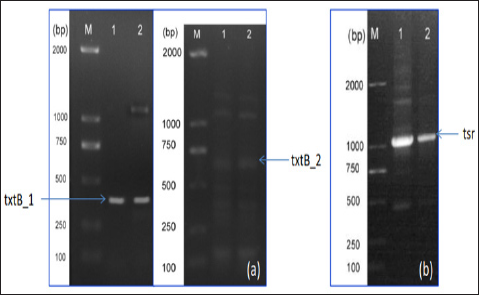 The Construct of Long Fragment Used for Homologous Recombination

By adopting the long multiple fusion (LMF) method as described in Shevchuk et al. [10], the three fragments (txtB_1, tsr, txtB_2) were ligated together to generate a long fragment (~2kb) (Figure 3). This long fragment (sized ~2kb) was used for gene inactivation in S. scabies based on homologous recombination.

As demonstrated by previous studies, OMB was the suitable medium for S. scabies to biosynthesize TXT [8]. Following culturing in OMB for 8-9d, the culture supernatants of S. scabies txtBA mutant and WT were subjected to organic-solvent extraction. Subsequently, TXT levels of both genotypes were determined against TXT standard by reverse phase(RP)-HPLC. As seen from the chromatographs, no TXT was detected in txtBA (Figure 4a), suggesting that the production of TXT was abrogated for txtBA as compared to WT which produced normal level of TXT (Figures 4b & 4c). 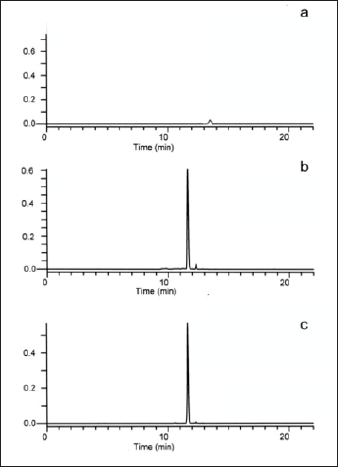 In view of that txtB deletion generates txtB knockout (KO) mutant, it seemed reasonable to question whether KO abolished transcription of txtB. In this study, the transcriptional level of txtB was monitored by reverse transcription (RT) -PCR with the txtB gene-specific primers. As shown in Figure 5, transcription of txtB was diminished in KO mutant while WT displayed abundant transcripts of txtB. In summary, an efficient intergeneric DNA transfer system was successfully developed between E. coli and Streptomyces sp. This method would lay a basis for DNA transformation and mutational studies of economically important strain S. scabies and other Streptomyces species as well.

Figure 5: Relative abundance of txtB transcripts as assayed by RT-PCR from S. scabies WT versus txtBA (knockout, KO) mutant. The gyrA gene, was used as an internal control to normalize the amount of cDNA template in RT- PCR analysis. 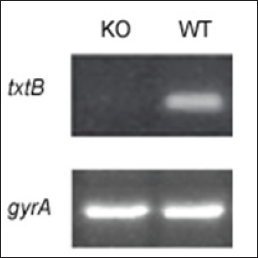 This work was supported by a funding from the Natural Science Foundation of Jiangsu Province, China (Grant No. BK20151133) to Lin L.