Background: The question on prospects of additional use of cellular therapy in standard protocols of brain neural networks recovery after neurodestructive processes of various etiology was analyzed. Data on low efficiency of existing methods of neurodestructive processes treatment gave a boost to authors to conduct series of studies related to brain diseases and cellular technologies. Existing treatment principles now should be updated with new methods - in particular, cellular technologies. This statement was based on stem cells (SC) presence in human brain. Nature has formed basis for neural network formation in the process of training and for recovery therapy in case of pathology. Unfortunately, recovery potential of brain SC appeared to be ineffective in neurodestructive processes. Therefore, SC should be additionally injected into brain. It is advisable to use autologous SC in order to avoid possible side effects, such as malignization of allogeneic and other SC. But in certain cases, use of allogeneic SC can be approved.

Methods: Autologous mesenchymal SC (MSC) are usually administered to patients in experimental and clinical conditions. Two ways of MSC delivery to brain are preferred: with cerebral blood flow after MSC injection into bloodstream and MSC implantation close to damaged area after additional skull trepanation. Authors experimentally developed and clinically evaluated new technique of perineural implantation of MSC. This method is based on natural ability of SC to migrate. MSC are implanted into the area of cranial nerve endings (mainly olfactory and trigeminal) and then they migrate along cranial nerves to cranial cavity.

Results: The area of vomeronasal complex (VC) is preferred for MSC implantation because its mucosa has nerve endings of both olfactory and trigeminal nerves. Such technique of MSC implantation was substantiated by authors and was named perineural implantation of MSC when used in neurodestructive processes.

Discussion and Conclusion: The article contains critical analysis and prospects of cellular technologies development for therapy of brain diseases. Special attention is paid in discussion to technology of perineural implantation of MSC in experimental and clinical conditions.

Search for various logical combinations for SC and brain diseases in PubMed on October 19, 2018 showed 29934 articles about "brain injury cerebrovascular diseases", 764 about "brain injury cerebrovascular diseases stem cells", 414 about "brain injury cerebrovascular diseases stem cells human" and 4 - about "brain injury cerebrovascular diseases stem cells human intranasal"Surprisingly, but these four articles contain information about administration of human SC to experimental animals, but not about therapy of human brain diseases. Authors of one article [1] used human MSC taken from umbilical cord of newborn babies for intranasal application in rodents with previously simulated hypoxia or brain ischemia. It was established that intranasal administration of human embryonic neural SC to neonatal rats with signs of encephalopathy is accompanied with more effective and rapid recovery of behavioral reactions control [2]. Intranasal injection of MSC from umbilical cord to Wistar rats is accompanied with activation of microglia and astrocytes leading to appearance of reparative properties of oligodendrocytes [3]. This process is also accompanied with acceleration of myelinization of neuron processes and optimization of interneuronal communications together with reduction of gliosis zone in damaged brain regions [3]. The range of mechanisms of positive effects of C3a peptide after its intranasal application to rodents was specified [4]. Therefore, there are no articles in PubMed related to intranasal administration of autologous SC for therapy of patients with brain diseases.

Authors started conducting studies for assessment of SC perineural implantation significance in activation of reparative processes about 10 years ago [5-12]. Patterns of SC migration in brain tissue have been established in the experiments - depending on the area of SC injection at cranial nerve peripheral endings and localization of neurodestruction site in brain tissue [5,10-12]. Such principle of migration was determined as somatotopic distribution of SC in brain [12].

SC consistently move directly to the site of destruction in brain [5-12]. It is already proved nowadays that such aimed migration is determined by various signaling molecules which are expressed by nerve and glial cells in the area of neurodestruction [5-12]. Somatotopic distribution of implanted SC in brain depending on the site of injection is another one regularity [12]. In particular, implantation of SC into the area of olfactory nerve endings results in SC distribution mainly in anterior and middle cranial fossae. Implantation of SC into the area of trigeminal nerve endings results in SC accumulation in posterior cranial fossa [12]. Additionally, significance of the amount of implanted SC was experimentally verified: it should be from several tens of thousands up to millions per one ml of culture medium. It was also experimentally stated that the best reparative results are reached when SC are implanted during first hours and days of neurodestruction development [8,11,12].

World statistics characterizes low efficiency of diagnostics and treatment of acute and chronic brain diseases [13,14]. The situation initiates search for new more effective technologies to resolve socially important issues affecting aspects of life and capability of citizens around the world. About six million people die due to stroke with various parts of blood vessels involved [13] each year according to WHO [13,14]. About 10 million people die each year due to brain trauma. Surgery remains one of the key methods in treatment of such fatal cerebral diseases as stroke, brain trauma, cerebral aneurysms and neoplasms. Effectiveness of surgery really increases with implementation of robotic devices (da Vinci Surgical System, Spine Assist, Renaissance Robotic Systems), high- tech operations (micro-, endovascular and stereotaxic surgery), combined therapy and new methods of rehabilitation [13], creation of electronic and other devices, some of them have already helped Stephen Hawking realize his unique intellectual dispositions. Possibilities of diagnostic procedures in cerebral diseases also enhance due to modern electronic equipment (CT, MRI, PET). These technologies improve diagnostics at early stages of brain diseases, but, unfortunately, don't improve treatment results [13].

All the countries constantly perform search for new more effective ways of brain diseases treatment. And these methods have been already developed in the fields of cellular biology and neurophysiology. For example, cellular therapy was successfully adapted for treatment of socially important diseases [8,9,11-14]. There were both followers and opponents of their implementation in clinical practice - this usually happens when elements of novelty appear in science and technics. Authors overcame that stage and moved from experimental studies to clinical implementation. This refers to technique of perineural implantation of SC [11,12], which has set of advantages compared to traditional systemic applications of SC (intravenous, intraarterial and intrathecal) [13-19]. Enthusiasts mastered hard period of substantiation of prospects of cellular technologies use in therapy of brain diseases. In fact, we have new stage nowadays when experimental studies are rapidly followed by implementation of new methods to clinical practice. There are both encouraging [11,15,17-19] and negative [8,12,16,20] results of cellular technologies use by doctors. It was found that intravenously and intraarterially implanted SC have extremely low ability to penetrate through blood-brain barrier to brain tissue [15,18]. There is another complication after intrathecal injection of SC: cells are unable to cope with craniocaudal flow of liquor [12]. Neurosurgeons perform SC implantation directly to brain tissue, but these manipulations are associated with additional surgical intervention (skull trepanation) which is undesirable in acute period of disease development [17]. The technique of perineural MSC migration of MSC to brain appeared to be an original way out [7,8,11,12,20,21] in contrast to traditional surgical interventions. Enhancement of this technique allowed developing somatotopic method of MSC implantation followed by their aimed migration to certain brain region [8,12] together with ways of visualization of migration process in clinical conditions [22-25]. Implantation of MSC was performed into the VC area (Figure 1) from where MSC migrate to region of neurodestruction by both olfactory and trigeminal nerve endings [22-25].

Figure 1: Hypothetic ways of SC migration from VC of rat (1) along olfactory (2) or trigeminal (3) nerves to cranial cavity (Figure by Dmitry Tokalchik). 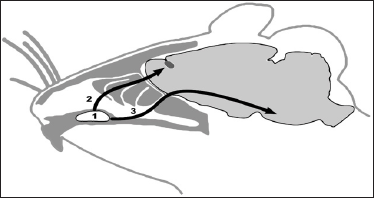 Technique of MSC implantation into nasal submucosa was chosen due to minimization of side effects and simplicity of accomplishment by neurosurgeon [8,12,20-22]. Migratory abilities of SC were taken into account during technique development [5,6,8,9,11,12] . Moreover, the presence of endogenous SC in nasal mucosa says for MSC implantation namely in that receptive field [8-11]. Considering localization of central structures of olfactory analyzer in anterior cranial fossa, it was proposed that the bulk of implanted SC will be located namely in the structures of anterior cranial fossa.

Adipose tissue was previously separated from epiploon of anesthetized rats, fermented with trypsin and plated in plastic flasks with culture medium and gentamycin. MSC were painted for monoclonal antibodies to CD90 (FITC- or PKH67-labeled) at the day of implantation. Brain slices 8|im in thickness were prepared and examined with fluorescent microscope Zeiss Axio Vert 200M at the final stage. Concentration of MSC in experiments on rats was 50 thousand cells per 50|il of culture medium. Concentration of MSC for intranasal implantation in patients was from 6 to 10 million cells per 1ml of culture medium.

Figure 2 shows distribution of FITC-labeled MSC in the area of lamina cribrosa ethmoid bone of rat after preliminary local destruction of brain in sensorimotor zone and subsequent implantation of 50 thousand MSC in 50|il of culture medium in the VC region. 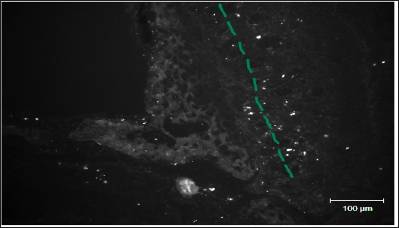 It is advisable to inject MSC suspension into soft tissues of upper and partially middle nasal conchae due to high density of olfactory nerve endings [11,12]. By the way, we have previously demonstrated that perineural implantation of SC is accompanied with activation of reparative potential of endogenous SC [8,12]. Endogenous pools of SC are located in three brain regions: area of olfactory bulbs, hippocampus and brain regions close to ventricles [12]. Unfortunately, endogenous SC lack reparative potential to recover impaired functions of nervous system when neurodestructive processes, Parkinson's and Alzheimer's diseases develop. Cellular technologies can help in these cases, namely perineural implantation of autologous SC from adipose tissue of the patient. These SC can migrate along nerve fibers from periphery to neural networks in brain and spinal cord. SC express various trophic factors on the way of migration, which have positive impact on both functions of neurons and glial cells close to brain trauma and activity of endogenous brain SC [8].

Unfortunately, authors understand that cellular technologies are not always act as panacea - regarding the situation with Stephen Hawking mentioned above. We lack more effective treatment approaches - for example, the ones based on combination of cellular methods with technologies of neural network formation in 3D-space. But this refers to close future.

There are frequent situations in modern clinical practice which require conditions for penetration of medicinal substances or SC into brain. Selective permeability of blood-brain barrier prevents penetration ofcellular elements into cranial cavity (SC, in particular). At the same time, protocols of systemic administration of MSC have been recently developed for treatment of neurodestructive processes. Above mentioned stimulated authors to develop an alternative method which would allow increasing effectiveness of cellular elements and medicinal substances penetration into cranial cavity. It is also necessary to develop such technology which will guarantee advanced penetration of SC but not toxic substances into brain tissue. Scientists who are aimed at widening of cellular technologies area of stem cells use should set sights on solving of mentioned problem and enhancement of developed technology.

This investigation was sponsored by SSTP "New methods of medical care", Section "Transplantation of cells, tissues and organs" (2016-2020), SPSI "Convergence", and by grant OOO "Synergy".