Effects of low-dose radiation (LDR) on living organisms including human is still in argument, in spite of the LDR is ubiquitous in our environment. One prominent phenomenon by the LDR is hyper-radio-sensitivity (HRS). The doses causing HRS by LDR varies from 10 to 200 mGy depending on the cell line and the quality of radiation. Before undertaking the research of HRS, to determine the doses conferring the HRS is necessary for each experiment system. Using human normal fibroblast cells, we determined the dose conferring the HRS as 75 mGy, and inferred the border of doses that distinguish from the increased radio-resistance (IRR) between 75 and 100 mGy with y-rays from a 60Co source.

While high-dose-radiation (HDR)-induced human diseases are well known, the effects of low-dose radiation (LDR) on human health is still in argument, in spite of the LDR is ubiquitous in our environment, for example, the radioactive substance leakage due to the accident of nuclear power plant, medical exposure such as medical diagnosis and radiotherapy, occupational radiation exposure, frequent-flyer risks and manned space exploration. Researches over the past two decades suggested the biological effects of LDR differ from those observed with HDR. Most cell lines exhibit hyper-radio-sensitivity (HRS) to LDR that is not predicted by back-extrapolating the cell survival response from HDR. As the dose is increased, they exhibit increased radio-resistance (IRR), and the cell survival follows the usual downward-bending curve with increasing dose. One explanation is, with low dose radiation, the induction of DNA repair mechanisms does not work sufficiently, then the cells becomes hypersensitive, while at high doses, the mechanisms can be recruited, then the cells becomes resistant [1-3]. Another mechanism of HRS by LDR was explained as the radiation-induced bystander responses in unirradiated cells that receive signals from the neighboring irradiated cells give carcinogenic risks.

In contrast, the LDR sometimes confers beneficial effects, called radiation hormesis, on organisms [4]. Moreover, the adaptive response by the LDR to the following HDR has been studied [5]. The LDR is generally defined as a radiation dose of 100 mSv or less (<100 mGy). However, even if it is limited to researches of human culture cells, the doses causing HRS by LDR are various from 10 to 200 mGy depending on the cell line and quality of radiation [6-8] and most of them utilized wide intervals of doses. Because the IRR occurs at close doses of the HRS, determination of the accurate border of dose that distinguish the HRS and IRR is necessary, especially for analyzing the mechanisms underlying the events of HRS/IRR, by observing the cellular responses by irradiation of gradually increasing doses as much as possible. To accurately determine the dose at which HRS/IRR occurs in various cells by delimiting the dose more finely, will lead to correct coping of the LDR whether it has proper impact as radiation hormesis or harmful effect. In this study, we investigated the dose of y-rays for HRS using human normal fibroblast cells because they are widely utilized for this kind of research and determined border doses distinguishing from doses for supposed IRR, by conventional cell biological methods.

Cell Culture and Irradiation by r-Rays

The "Normal Human Dermal Fibroblasts (NHDF), adult donor" used in this study was purchased from KURABO (Osaka, Japan). After thawing, they were routinely cultivated in T-25 flasks (BD Biosciences, Bedford, MA, USA) with phenol red-free Dulbecco's modified Eagle's medium (D2902, Sigma-Aldrich, St. Louis, USA) supplemented with 10 % Glucose to make final concentration of 4.5 g/L, 5 % sodium carbonate to 3.7 g/L, fetal bovine serum (Invitro- gen Corp., CA, USA) to 10%, penicillin(Wako Pure Chemical Industries) to 100/U and streptomycin to 100 μg/mL (Wako Pure Chemical Industries). The cells were cultivated at 3n in an atmosphere of 95% air/5% carbon dioxide. When the cells were grown to 80% confluence, they were detached by trypsin, counted and cultivated in 3.5 cm dishes with density of 1.0~2.0*104 cells/dish. After two days from seeding, the cells were measured cell viabilities by the WST-8 assay (described later), then were irradiated with gamma rays from a 60Co source at the Radiation Research Center of Osaka Prefecture University, Japan.

The irradiation dose was defined by the distance of each plate from the 60Co source and at room temperature cells were irradiated with doses of 0, 20, 50, 75, 100, 300, 1000, 10000, 30000 mGy. The 0 mGy (control) group was transported to the staff-waiting room to discriminate observations from environmental stresses. After 2 days’ cultivation, the cells were treated to measure the cell viability and living cell numbers. Same experiments were performed at least 5 times.

Cell viability in each culturing dish was determined by the WST-8 assay method. This is designed for the spectrophotometric quantification of cell viability that reflect the mitochondria dehydrogenase activity of living cells. Following the manufacturer's instructions, the cultured medium was first removed; and 50 μL of CCK-8 mixture (Dojindo Laboratories, Kumamoto, Japan) and 500 μL of culture medium was added to each dish; and incubated for 30 min. The supernatant was transferred into a microtube, and the reaction was stopped with the addition of 50 μL 0.1 M HCl. The resultant diformazan formation was measured based on the absorption at a wavelength of 450 nm with a micro-plate reader (Benchmark, Bio-Rad, CA).

Figure 1: hange of mean cell viabilities revealing the HRS phenomenon. The horizontal axis indicates y-doses in a logarithmic scale, while the vertical axis indicates the normalized cell viabilities of the irradiated cells compared with the control cells. Standard deviations are indicated by vertical lines. At 75 mGy the phenomenon supposed to be HRS can be observed (indicated by an arrow). N=9. 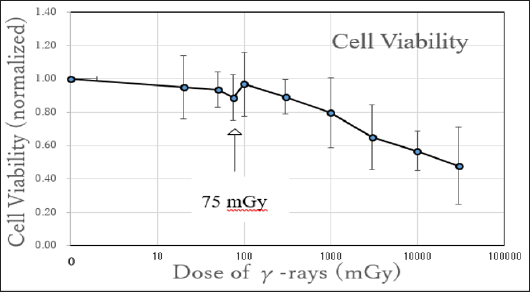 Figure 2: Change of mean living cell numbers revealing the HRS phenomenon. The horizontal axis indicates y-doses in a logarithmic scale, while the vertical axis indicates the normalized living cell numbers of the irradiated cells compared with the control cells. Standard deviations are indicated by vertical lines. At 75 mGy the phenomenon supposed to be HRS can be observed (indicated by an arrow). N=5. 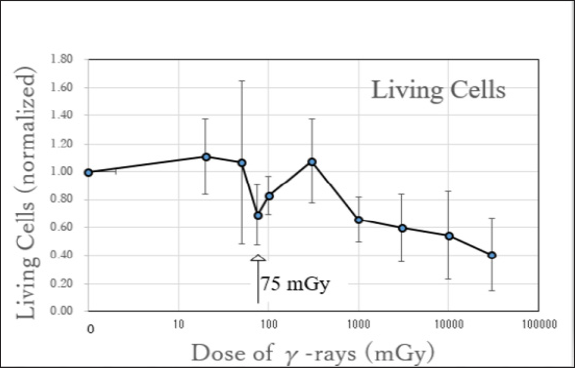 Therefore, the border of dose that distinguish the HRS and IRR between 75 and 100 mGy, in consistence with the previous result of cell viabilities (Figure 1). Because any significant difference was not observed between 50 mGy versus 75 mGy, or between 75 mGy versus 100 mGy, in both indexes of cell viabilities and living cell numbers. One reason of the insignificant difference between the adjacent y-doses would be the deviations in this experimental system. The deviations would be brought by the difference of cell origins. By the cell lot, the origins of the fibroblast cells were from Hispanic women or Caucasian women with variety of ages 3145, according to the manufacturer's instructions. The reference describing the different degrees of radio-sensitivity of human fibroblast cells depending on the cell lines [9] is relevant to our observation. To elucidate the underlying mechanisms of HRS at the levels of genomic DNA mutation, changes of mRNA expression and protein expression, a detailed division of irradiation dose is necessary.

The dose causing hyper-radio-sensitivity (HRS) by low-dose radiation (LDR) was determined to be 75 mGy for human normal fibroblast cells with γ-rays from a 60Co source, and the border of doses that distinguish from the increased radio-resistance (IRR) to be between 75 and 100 mGy.