It is known that the causative diseases of secondary hypertrophic pachymeningitis (HP) include infections, malignant tumors, autoimmune diseases. Although myelodysplastic syndromes (MDS) are often accompanied by certain autoimmune diseases, secondary HP with MDS is rare. We here describe the patient with HP complicated by MDS and have severe resistance to the steroid therapy and successfully treated with the combination of corticosteroids and 5-Azacytidine (5-Aza). Administration of 5-Aza might be a useful therapeutic option for patients with refractory autoimmune diseases complicated with MDS.

Hypertrophic pachymeningitis (HP) are secondarily caused by various diseases such as infections, malignant tumors, and autoimmune diseases [1]. Myelodysplastic syndromes (MDS) are hematopoietic malignancies characterized by pancytopenia in the peripheral blood and is often complicated by autoimmune diseases [2-4]. However, there are few reports of MDS complicated by HP 5-Azacytidine (5-Aza) is the first-line treatment options for high-risk MDS patients, for whom allogeneic hematopoietic transplantation is not eligible due to the old age and/or comorbidities. Here we report the first case of MDS complicated by HP, which was successfully treated with the combination of 5-Aza and corticosteroids.

A 75-year-old man was referred to our hospital due to recurrent fever and swelling of his palpebra for three months. On the first visit at our hospital, the left eye was protruded and there was no sign of meningeal irritation or obvious neurological abnormality. Plain CT scans of the head demonstrated the existence of sinusitis, otitis media. The laboratory examination revealed that serum C-reactive protein (CRP) level was elevated and serological test was negative for antinuclear antibodies, PR3-anti-neutrophil cytoplasmic antibody (PR3-ANCA) and MPO-anti-neutrophil cytoplasmic antibody (MPO-ANCA). Although the protein level increased to 116 mg/dl in the cerebrospinal fluid, the glucose level was normal and there was no increase in cell number. Despite the treatment with antibiotics for orbital cellulitis, high fever persisted for more than 10 days. Contrast enhanced magnetic resonance imaging (CE-MRI) of the brain showed the enhancement of bilateral dura mater (Figure 1), thus we diagnosed him as having HP In response to oral administration of prednisolone 40 mg/day, both fever and swelling of the palpebra were gradually dissolved.

Also, the enhancement of the dura mater was found to disappear by CE-MRI (data not shown). Because of anemia and thrombocytopenia on admission, we performed bone marrow analysis. The bone marrow aspirate revealed 7.3% of myeloblasts and morphologic abnormalities indicative of MDS. Karyotypic analysis of the bone marrow showed many abnormalities and WT1 mRNA level also increased to 14 x103 copy/^L. From these findings, we diagnosed this patient as having MDS (RAEB-1, IPSS Int-2) complicated with HP. When the dose of prednisolone was tapered to 30 mg/day, fever and swelling of the palpebra recurred and repeated brain CE-MRI demonstrated the enhancement of bilateral dura mater (Figure 2). So, intravenous methylprednisolone pulse therapy (500 mg/day for 3 days) was given, followed by oral prednisolone 40 mg/day being tapered by 10 mg every 2 weeks. CRP level decreased and relapsed soon after and fever persisted. Because we considered a possibility that background MDS might influence HP, we administered azacytidine (5-Aza) (110 mg/body for 5 days with 4-week interval) for MDS. This combinational treatment led to a dramatic improvement of the clinical symptoms and laboratory data during the next few weeks. WT1 mRNA expression was decreased to the normal range after the second course of 5-Aza (Figure 3). Then, the dose of prednisolone was gradually tapered to 17.5 mg/day, and he was discharged from our hospital without recurrence.

Figure 1: MRI at diagnosis of HP. 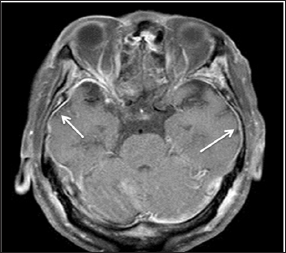 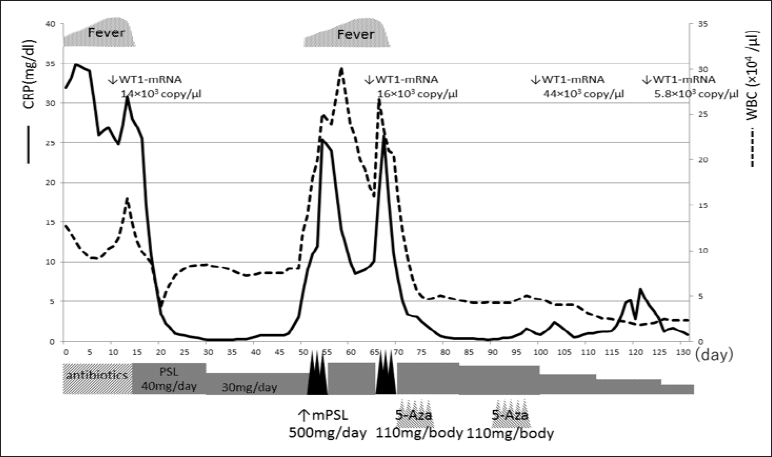 HP is characterized by multiple neurological manifestations caused by inflammatory or fibrotic thickening of the dura mater [1]. Causative diseases of secondary HP include infections, malignant tumors, and autoimmune diseases such as vasculitis, RA, neuroSweet syndrome, Sjogren's syndrome, and IgG4-related disease [5-9], and case reports of HP associated with granulomatosis with polyangiitis (GPA) are relatively common [5,10]. It has been reported that HP precedes GPA in some cases, and that such GPA are often negative for C-ANCA. Since there was no apparent infectious disease or malignancy in this case, we continued to rule out some autoimmune diseases and vasculitis. However, we were unable to diagnose these diseases because the biopsy of the nasal mucosa revealed no abnormality and PR3-ANCA and MPO-ANCA as well as other auto-antibodies were negative. On the other hand, MDS is known to be complicated with certain autoimmune diseases [2-4], but MDS cases complicated by HP are quite rare. Corticosteroids are the mainstay of the conservative treatment of HP and other immunosuppressive therapy as the treatment of the primary diseases of secondary HP. It is known that HP often recurs when the dose of prednisolone is rapidly reduced. Ueda et al. [10] reported that most recurrences were observed when prednisolone was reduced to 20mg/day or less. Because HP recurred within a short period after prednisolone was reduced to 30mg/day in the present case, our case seemed to have resistance to the steroid therapy compared with previously reported cases. So, we speculated that MDS might be playing some role in the pathogenesis of HP in our case.

5-Aza is a nucleoside-based DNA methyltransferase inhibitor that induces demethylation and gene reactivation [11]. 5-Aza is the first-line treatment option for high-risk MDS patients, who are not eligible for allogeneic hematopoietic stem cell transplantation, based on a report that it extended the median overall survival by 9.5 months in comparison with conventional treatment [12]. When methylprednisolone pulse therapy was given with 5-Aza, fever was dissolved, and CRP level was normalized shortly, unlike the response to the initial methylprednisolone pulse therapy without 5-Aza. This clinical course suggests that 5-Aza might have contributed to the improvement of HP. We can hypothesize two possibilities about the efficacy of 5-Aza on HP: one is that 5-Aza improved HP through the improvement of MDS (which was proved by the normalization of WT1 mRNA), and the other is that 5-Aza directly improved the HP We consider that the latter possibility would be more likely, because HP was improved prior to the reduction of WT1 mRNA level after 5-Aza treatment. In agreement with our hypothesis, azacytidine has been reported to weaken acute or chronic graft-versus host diseases (GVHD), which resembles autoimmune diseases, after allogeneic hematopoietic transplantation through the expansion of regulatory T cells [13-15].

In summary, the present report is the first to document the effectiveness of 5-Aza in combination with steroid on MDS- associated HP. We speculate that 5-Aza might be a therapeutic option for refractory autoimmune diseases complicated with MDS. However, since 5-Aza has various effects on immunologic system, further studies are needed to draw a definite conclusion.