Background: Various fixation methods can be applied in sacroiliac injuries.

Objective: To propose an alternative fixation method for sacroiliac joint injuries with a pre-contoured cloverleaf plate.

Methods: We used a modified surgical technique with using a cloverleaf plate as a sacroiliac joint plate for treating a series of 7 patients with complex sacroiliac joint injuries in a single medical institute. The surgical technique was detailed described. Each patient was followed up with at the outpatient clinic after discharge at 2 weeks, 4 weeks, 12 weeks, and until bone union and pelvic ring stabilization.

Results: All patients were followed up with for at least 6 months. There were no perioperative complications, such as nerve or vascular injury, a broken plate, loose screw and plate, and loss of reduction, due to the osteosynthesis operations. During the follow-up period, all fixations were maintained until early bone union.

Conclusion: Fixation of a sacroiliac joint fracture with a cloverleaf plate is an alternative and new option that provides good fixation strength and economic efficiency.

Declaration: There is no conflict of interest for each author.

Sacroiliac joint injury is a common injury caused by high- energy trauma and it is associated with unstable pelvic ring injury [1-3]. This injury pattern causes rotational instability of the hemipelvis, and osteosynthesis operation with internal fixation is always necessary to restore posterior pelvic ring stability [4]. The options of fixation for sacroiliac joints include iliosacral (trans- iliac/trans-sacral) screw by closed or open reduction [2, 3, 5, 6], open reduction and internal fixation with two orthogonal plates ventrally [4], and even triangular osteosynthesis for more complex and vertically unstable fractures [7,8]. The choice of fixation should be individualized according the type of pelvic injury. In the present report, we propose a technical modification whereby the stability from fixation can be improved easily without surgeons having to resort to using multiple plates. By using a cloverleaf plate to stabilize the sacroiliac joint, the area of contact is broadened and acts as a single implant. We describe the use of this technique in our small case series of 7 patients.

Under the approval of Institutional Reviewing Board, we reviewed patients with fracture or fracture dislocation of the sacroiliac joint between March 2016 and December in 2016. During this study period, we performed a modified surgical technique on 7 patients whose demographic data and fracture classification are listed in Table 1. Each patient was followed up with at the outpatient clinic after discharge at 2 weeks, 4 weeks, 12 weeks, and until bone union and pelvic ring stabilization.

Table 1: Demographic data of the 7 patients. 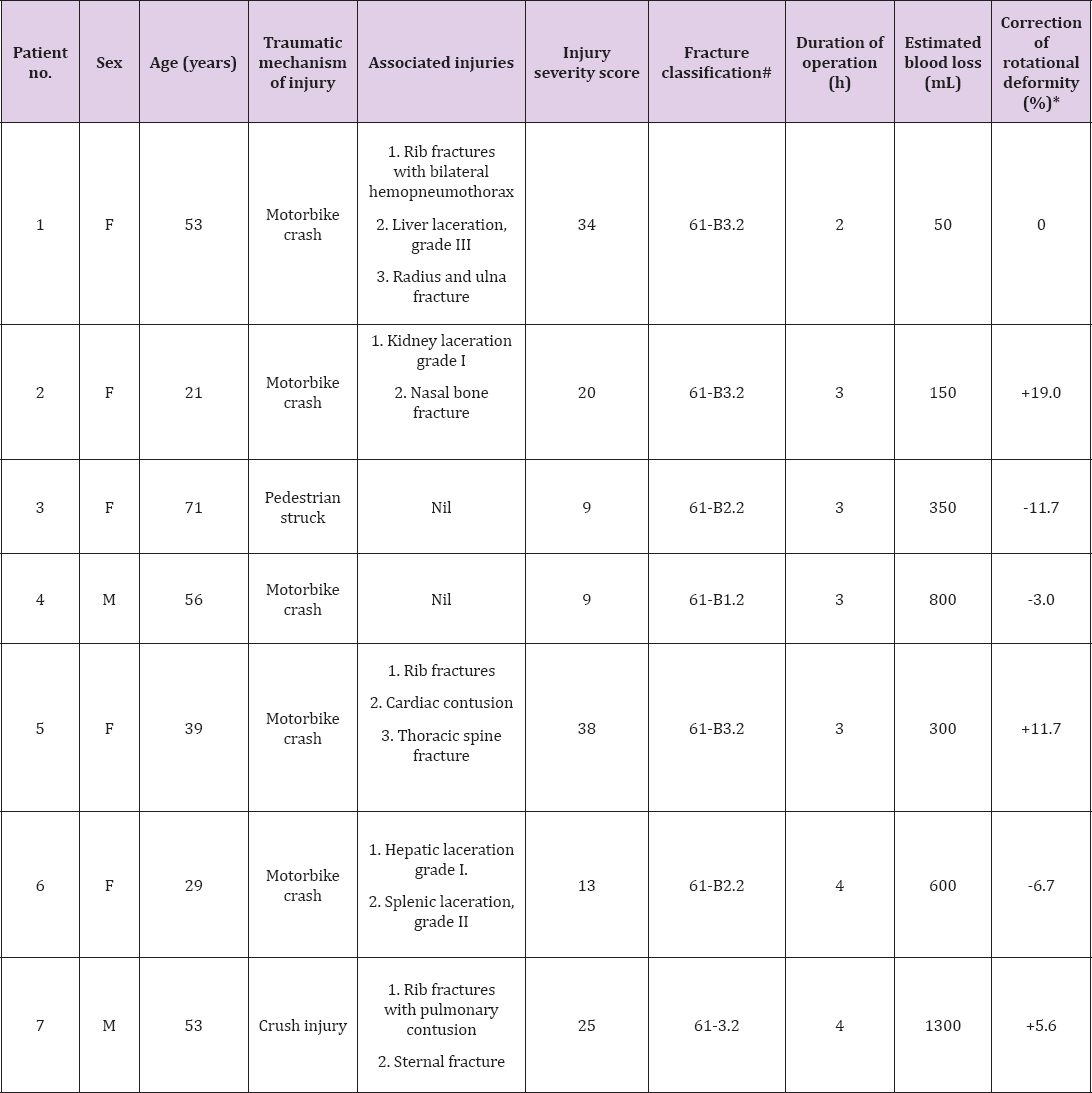 This technique is indicated for patients with pelvic fractures involving an injury to the sacroiliac joint. We used a conventional cloverleaf plate (Depuy Synthes, West Chester, PA, USA) as the fixation implant for such an injury (Figure 1A). The plate can be sized and pre-contoured by removing the stem part and leaving only the leaf part (Figure 1B). The leaf portion can be bent, and the remainder stem part of the plate can be gently twisted to match the contour of the sacrum, sacroiliac joint, and ileum (Figure 1C). The screws that go through the leaf part and into the sacrum can be tailored, mainly depending on the injury pattern, and usually 2 to 3 screws are necessary (Figure 1D). The plate can be slightly over-bent at the junction of the leaf part and stem part to overcome the external deformity of the injured hemipelvis. The remaining stem part of the plate should be twisted to fit the anatomical ileum surface. 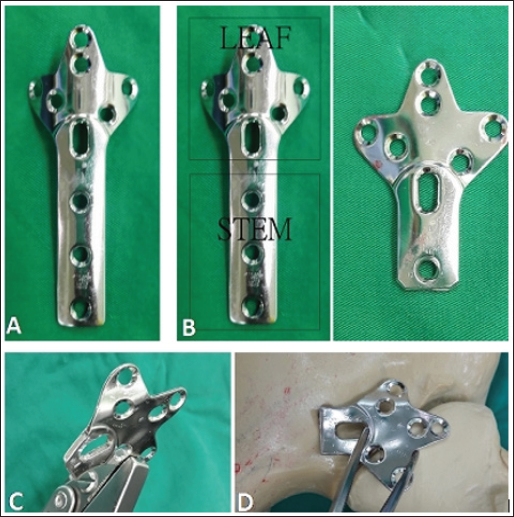 A screw can be used to fix the plate and posterior superior iliac crest at the most cranial hole of the leaf part, and another screw can be placed in the hole of the stem part for the ileum. Sometimes two holes of the stem part can be retained for a more complex fracture pattern of the sacroiliac joint. Similar with any one-third plate for a sacroiliac joint injury, surgeons should be careful to ensure that the plates are not placed too medially from the sacroiliac joint, as this may cause irritation and injury to the L5 nerve root. Other potential complications associated with this plate include nonanatomical reduction of the sacrum and ileum due to over-contouring or under- contouring, and improper reduction of the ventral pelvic ring and placement of the ventral pelvic ring plate if the plate is too bulky. The cloverleaf plate for a sacroiliac joint injury is always positioned through the lateral surgical window, either using the ilioinguinal approach or an isolated incision combined with the modified Stoppa approach. After reduction and fixation of the sacroiliac joint injury, the rest of the fractured pelvis can be reduced and fixed in a step-by-step manner.

All patients were followed up with for at least 12 months. There were no perioperative complications, such as nerve or vascular injury, a broken plate, loose screw and plate, and loss of reduction, due to the osteosynthesis operations. During the follow-up period, all fixation was maintained until early bone union (Figure 2A & 2C). All patients followed the tailor-made rehabilitation protocol according to the severity of their injuries.?

Figure 2: Presentation of case number 5, a 38-year-old woman who was involved in a traffic crash (motorbike versus truck). (A) A 3-dimensional computed tomography scan of the pelvis showing a pelvic fracture (AO/OTA 61-B3.2). (B) Osteosynthesis operation for the pelvic fracture is performed using several implants, including a pre-countered sacroiliac plate. (C) The pelvis is stable at the 12-month follow-up.

Fixation of a sacroiliac joint fracture with a cloverleaf plate is an alternative and new option that provides good fixation strength and economic efficiency.