Glioblastomas tend to be morphologically diverse. Although rare, pseudoepithelial components (adenoid or epithelioid) can be a diagnostic challenge. We describe a case of a 47-year-old female patient initially complaining of neck pain and dizziness. On neurological examination, an unsteady gait and memory disturbances were noted. MRI showed a contrast-enhancing lesion in the left temporal lobe without significant edema, suggesting the presence of cerebral metastasis. After complete resection of the tumor (as verified by early post-op MRI), the patient made an uneventful recovery. Based on extensive histopathological analyses, the tumor was diagnosed as epithelioid glioblastoma (E-GBM). Two months after concomitant radiation and chemotherapy, the patient developed severe neck pain, became dizzy and was confused. CSF examination confirmed tumor cells, and MRI of the spine showed diffuse dural contrast enhancement, suggesting extensive leptomeningeal spread. The patient passed away four months after the initial diagnosis. E-GBMs represent one of the least prevalent morphologic subtypes of glioblastoma. Although E-GBMs are difficult to detect and often do not present as high-grade gliomas, clinicians should be aware of the unusual patterns of these GBMs. E-GBM should be considered in the case of MRI findings without peripheral edema, and when newly diagnosed intracerebral masses arise without a known primary. In addition, we discuss our case in terms of previous reports on this condition.

Glioblastomas are the highest-grade malignant brain tumors within the spectrum of astrocytic neoplasms [1,2]. A very uncommon morphologic variation is glioblastomas with epithelial or pseudoepithelial (adenoid or epithelioid) features. Epithelioid glioblastomas (E-GBMs) are a rare subtype characterized by a cohesive architectural organization in epithelioid nests and sheets. This phenotype can obscure the glial lineage and may mimic metastatic involvement of non-CNS neoplasms because of epithelial-like characteristics [1,3-5]; thus, E-GBMs remain a considerable diagnostic challenge. Many reports have described these unusual glioblastomas as solitary lesions [6,7]. However, Gasco et al. reported the first case of a multifocal E-GBM that resembled cerebral metastasis [6]. In the present work, we describe an unusual occurrence of an E-GBM with leptomeningeal gliomatosis and discuss it in terms of the available literature.

A 47-year-old right-handed female patient complained of neck pain and dizziness. Neurological examination showed an unsteady gait and memory disturbances with no other focal neurologic deficits. Magnetic resonance imaging (MRI) showed a contrast- enhancing lesion in the left temporal lobe without significant surrounding edema, suggesting the presence of a cerebral metastasis (Figure 1). Whole-body MRI screening for a non-CNS primary was negative. Intraoperatively, the tumor was well-defined and demarcated with respect to the surrounding brain tissue, but it extended into the temporal horn, which thus had to be opened during resection. An early post-operative MRI showed complete resection of the contrast-enhancing lesion. The patient recovered quickly from surgery. 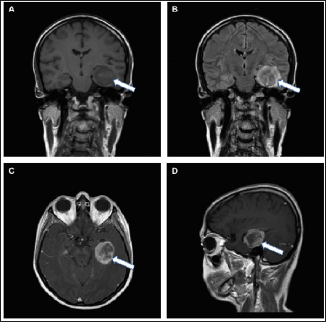 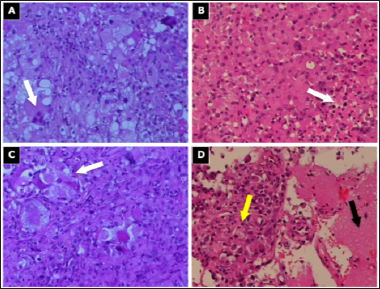 It is well established that GBM can exhibit a range of morphological features. Rare presentations of granular cell GBM [810] and rhabdoid GBM [11-13] have been reported. However, these may also be mistaken for metastatic carcinoma. These rare forms of GBM frequently develop leptomeningeal dissemination and early recurrence, and the overall prognosis is considered extremely poor [1,14]. Kepes et al. were the first to report on E-GBM and provided a comprehensive description of adenoid GBM and GBM with epithelial metaplasia [15]. They described a pathognomonic tumor cell arrangement with cribriform, trabecular or pseudo- acinar structures in five tumors. They were defined as adenoid structures in gliosarcoma [1,15,16]. The authors suggested that the pathological arrangement might help to distinguish the tumor from metastatic carcinomas, an interpretation in line with that of other authors [17]. Rubinstein et al. noted that these arrangements are rare GBM variants and described tumors with papillary formation mimicking medulloepithelial-like formations [18].

Concerning terminology, Kepes et al. defined them as adenoid tumors, but because of the variety of cell arrangements, the terminology has since shifted to the term epithelioid tumors [15]. Mork et al. reported on the papillary elements in adenoid GBM, which may mimic structures in medulloepithelioma [19] and on epithelial metaplasia in malignant gliomas [3]. E-GBMs represent one of the rarest morphological subtypes of glioblastoma [1]. Due to their neuroradiologic and morphologic features, they are often not suspected of being high-grade gliomas [20], and their well-circumscribed masses are often mistaken for metastatic carcinoma. As a rare variant of GBM, the epithelioid pattern may represent a very primitive tumor cell phenotype. Examples of malignant gliomas with lipidized tumor cells in which striking intracytoplasmic accumulations of lipid obscured the glial lineage of the lesion have been described [21-23]. Epithelioid neoplasms are defined as tumors with variable sized cells with eosinophilic cytoplasm, rounded cell morphology, nuclear atypia and mitotic figures [16]. Similarly, large eccentric nuclei and prominent nucleoli can occur but with no cytoplasmic ball-like filaments and no polyphenotypic immunohistochemical expression. The cells often display discohesion [23].

In addition, E-GBM might feature prominent xanthic changes and can be mistaken for metastatic renal cell carcinoma [1,21,24]. In 2008, Rodriguez defined epithelioid glioblastoma as round cells without a conspicuous process, with areas where the cells showed more eosinophilic cytoplasm and prominent nucleoli, as well as glial fibrillary acidic protein and CAM 5.2-immunoreactivity [1]. The radiological presentation of primary malignant epithelioid tumors of the central nervous system is non-specific. In MRI, the E-GBMs are iso- to hypointense on T1-weighted images, of mixed signal intensity on T2-weighted images and contrast-enhanced with gadolinium. As a pathognomonic feature, MRI findings without peripheral edema may be clinically significant [16], and newly diagnosed intracerebral masses without a recognized primary focus can be a sign of an epithelioid GBM [25]. In many cases, sharp circumscription and occasional hemorrhage are stronger clinical signs of metastatic tumor than primary glioma. Further signs include cystic, hemorrhagic, calcific and necrotic foci [20]. Epithelioid sarcoma is also a relatively rare lesion and more commonly seen in males.

In contrast to epithelioid sarcomas, epithelioid glioblastoma lesions are still characterized by their vascular proliferative changes and will stain with glial fibrillary acidic protein antibody (GFAP) [26]. Pediatric E-GBMs express the typical histological characteristics seen in adult tumors. Immunoreactivities for INI1 and loss of diverse protein expressions were seen in most cases [27], making the diagnosis of infiltrating astrocytomas difficult. Table 2 provides an overview of case reports on epithelioid glioblastoma and their immunohistochemistry. The majority of E-GBMs arise de novo. However, a small proportion of E-GBMs may progress from lower grade astrocytomas [28]. Alteration of BRAF V600E in particular has been reported as a possible driving mutation in the malignization of low-grade astrocytomas [29-33]. Exploration of molecular markers and targeted therapy has become the foundation and hope of current GBM research. Considering the rarity of E-GBMs, a delineation of BRAF V600E in large trials is highly unlikely. Nevertheless, its poor prognosis calls for extensive molecular characterization of possible target points in individual cases.

Table 2: Reported cases of epithelioid glioblastoma (E-GBM) and their immunohistochemistry. 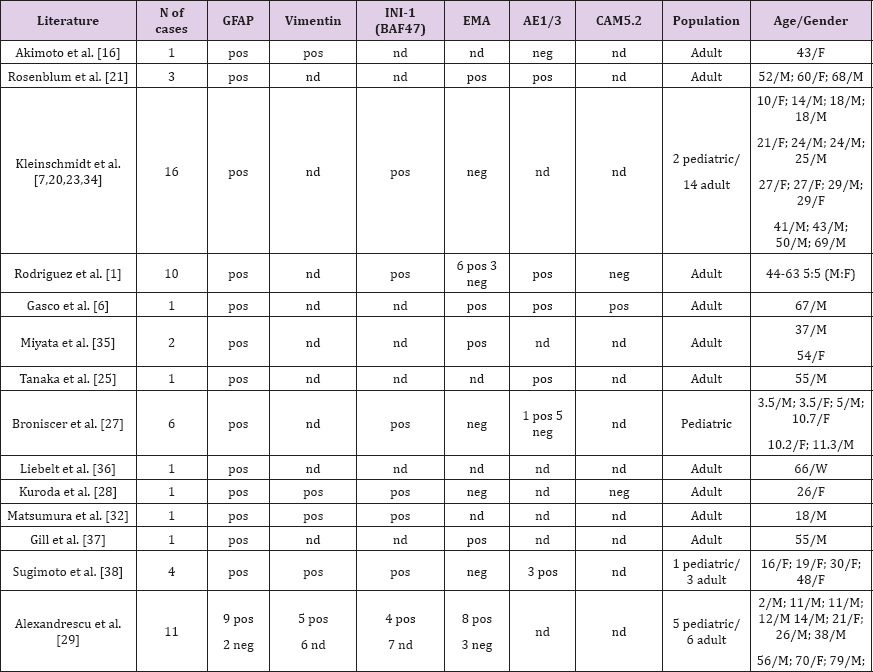 While the status of this marker was not determined in this patient, targeted pharmacological agents such as the BRAF enzyme inhibitor Vemurafenib may represent an additional option in the treatment of E-GBM in the future [34]. In summary, the current case and the literature review report the pathologic, immunophenotypic and molecular characteristics of epithelioid GBMs. Although molecular abnormalities of E-GBMs overlap with those of typical GBMs and gliosarcomas, they are a specific subgroup of GBMs that must be considered when metastatic carcinomas are suspected. To our knowledge, we also provide the first report about an E-GBM with leptomeningeal dissemination. This may be of importance since E-GBMs are associated with an even worse prognosis compared with other, more frequent GBM-types.

E-GBM is histologically characterized by the presence of epithelial-like cells. Because of their inconspicuous appearance to surgeons and on MRI scans, E-GBMs are often not recognized as high-grade gliomas, highlighting the importance for clinicians to be aware of their unusual patterns. Therefore, E-GBM should be considered as a differential diagnosis even when a known primary systemic malignancy is present because its histopathological features may mimic those of metastatic brain adenocarcinomas.

The patient is deceased; the legal supervisor has consented.