Reconstruction of a torn anterior cruciate ligament (ACL) cannot be successful without a properly placed tibial tunnel. Graft impingement occurs when the graft becomes trapped in the notch between the rounded ends of the femur (intercondylar notch) with the knee in extension. A surgical technique for customizing the placement of the tibial tunnel, preventing roof impingement, is presented. For strategies for avoiding graft impingement, surgeons have used two aspects, the anatomy of the ACL and associated landmarks. However, this study showed that the tunnel placement could be determined by the linear combination of two paths of rotational movements of the functional joint. The two lines of paths are referred to as a pair of conjugates and do not belong in the lines of forces in the knee complex, during locomotion.

The most important predictor of clinical outcome in the anterior cruciate ligament (ACL) reconstruction is tunnel placement [1]. Roof impingement occurs when an ACL graft prematurely contacts the intercondylar roof before the knee reaches terminal extension (Figure 1). Impingement syndrome occurs where the relationships between two articular components are incongruous, with resulting friction, inflammation, and degeneration [2]. To consistently choose the ideal tibial tunnel location, the surgeon needs to be familiar with the unique anatomy of the ACL footprint and associated landmarks. The ideal graft is positioned in the intercondylar notch so that it approximates the angle of the intercondylar roof during extension. Using the detailed guidelines for tunnel placement and length, the tibial tunnel should be parallel and posterior to the intercondylar roof with a knee in full extension [3] (Figure 1). If one looks at a radiograph with the full knee extension, the tibial tunnel needs to open into the joint in a position that is behind of the junction of two imaginary lines−one corresponding to the tibial plateau and the other roof of the intercondylar notch (Blumensaat’s line).

Two prominent surgeons in particular- Freddie Fu and Charlie Brown, have been working on the idea of anatomical ACL reconstruction, doing a lot of works on “Where’s the right place to put the ACL?”, In particular, in the cadavers, on CT, on MRI and so on, restoring anatomy may be the key to success [4]. The anatomical arrangement of the ACL causes tensioning of the fibers in the anteromedial (AM) bundle and loosening of the fibers in the posterolateral (PL) bundle, which is seen as a reciprocal tension pattern. So, this group of prominent surgeons, including several leading Japanese surgeons [5], looked more carefully at the anatomy and doing a different kind of ACL reconstruction and came up with this concept of ‘double-bundle’ ACL reconstruction, as opposed to a single bundle ACL reconstruction [6]. That is a very anatomical way of doing the surgery as it is re-creating the anatomy by replacing the two ruptured bundles of the original ligament with two new bundles [4]. However, which, if any, of these recommended placements, results in the goal of obtaining an isometric graft remains uncertain [7,8].

It is not often realized, even by anatomists, that it is the function of a joint not merely to permit mobility of the articulated bones, but also to register the relative position and movement of the bones [9]. The organs of the knee fall into the perceptual system. Ligaments and cartilage contact contribute to the mechanical constraints in the knee joints [10, 11]. Next to its mechanical function, the ACL has an important somatosensory feedback loop [12] by providing proprioceptive information regarding kinematics of the knee joint [13-20]. Furthermore, a reduction in knee proprioception plays an essential factor for osteoarthritis propagation [21]. We should choose surgical procedures that reconstruct not only the anatomy but also the neurophysiology feed-back mechanism [22-25]. Recently, there were attempts to characterize “articular kinesthesis” of the knee joint by measuring the instantaneous axes of the knee (IAK), yielding information about the joint position as well as joint rotation [26, 27]. The IAK [28,29] is proposed to play an integral role in understanding equilibrium function in postural maintenance, occurring in response to gravity and ground reaction and in postural stabilization, occurring in response to a perturbation [30]. The hypothesis being entertained is that the IAK is the result of perceptual action for it adjusts perceptual information obtained from its environment, as contrasted with the merely passively driven knee axis.

The IAK is an indeed obtained stimulus, rather than an imposed one, which is prevented by the term axis. We suppose that the knee to be one degree-of-freedom [31] in equilibrium [32] under the influence of pure force along ligaments, and articular contacts, induced by the action of muscle forces, then the necessary and sufficient condition is, that the forces which act upon the ACL graft shall constitute involution with the original system. The objective of this study is to show how the knee tensegrity system manages the balance between tension and compression during locomotion and demonstrate the method to determine ideal placement of the tibial tunnel with respect to the IAK. Such placement in vivo has the potential to produce an isokinetic graft without risk of impingement reliably.

The tensegrity’s structure is characterized by the contact normal elements $’4 and $’5, while all the other elements are, continuous tension elements, showing specific configuration having torqueless connections (Figure 1) [33]. There are no moments at the joints because the knee tensegrity structures are entirely in involution [34,35] and, therefore, there are no bending moments in these structures, just tension and compression, and omnidirectional load distributors. Phillips [36] refers to each of the contact normal and tensional loads at the IAK as spokes of the linear complex [37-40] because these lines of force resemble spokes of the bicycle wheel. Three lines were projected respectively to the sagittal plane so that the line of graft could be aligned to any transversal intersecting this pair of directrices: the central line of knee complex that is the instantaneous axis of the knee, directrix 1 and directrix 2 (Figure 2). The lines were generated at the stance phase of 50%. Notice that if the graft line may be not precisely aligned with the member line within the knee complex, due to position errors, for example, the velocity difference on the graft line would not be zero, but still be small. 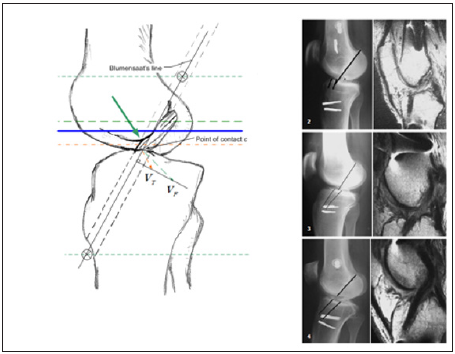 Figure 2: ACL alignment tuned to the two directrices. We could conjure a novel surgical technique for customizing the placement of the tibial tunnel, obtaining the two directrices, then aligning the line of the graft to be intersecting this pair. 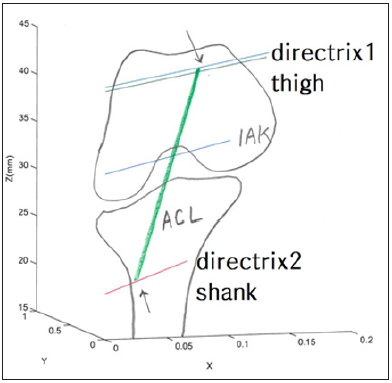 If the line of an ACL graft is so selected that it cuts both directrices of the knee complex, then the line becomes a member of the knee complex, which ensures the isokinetic graft placement related to trans-tibial-femoral tunneling. Consider now the necessary kinematic relations in that contact point c is the common point belonging to both tibial and femoral tunnel (Figure 2). The velocity of the point c residing on the femoral tunnel ( ) can be resolved into two components: One component is perpendicular to the graft line, and another component parallel to it; similarly, the velocity of the point on the tibial tunnel coincident with the point c ( ) can also be resolved into two components. For the two bodies to remain in conjugate motion the parallel component of the graft line of its velocity must be equal, by projecting and onto the graft line (Figure 1); otherwise, it would result in impingements. The difference in the perpendicular component is the relative sliding velocity between the articulating tunnel seems closely related to an essential factor in choosing the proper size in a tunnel width. Widening of the tunnel diameter might be performed, allowing more tolerances for this sliding, taking account of the width of the graft and existing diameter of the notchIf we recall that a force acting on a reciprocal screw does not change the rate of work being done on a knee constrained by a knee joint axis (IAK), then, if time is treated as an independent variable, the reciprocal condition states that if a knee has an infinitesimal displacement, the work done by a force acting on the reciprocal screw to the knee is zero.

If a foot is held still at the stance phase, braking forces (or torques) on knee joint are required to balance a ground reaction force acting on the foot. From the principle of virtual work, we know that the reaction torques (or forces) on the joints are zero if the force is along the reciprocal screw. Therefore, if the IAK is used for drilling for customizing the placement of the tibial tunnel, one can align the drill with the axis of the reciprocal screw and eliminate the reaction (braking) torques about knee joints. The reaction forces (and torques) of the foot will then be taken by the base of the foot instead (i.e., the entire leg system) (Figure 2). Therefore, it was stated that we should choose surgical procedures that not only reconstruct anatomy but also restore functioning in the original knee complex system, where the line of force in ACL graft must be incapable of causing a change in the IAK. In other words, knee complex in involution is the necessary and the sufficient conditions to avoid the roof impingement.