Fetal lung is one of the organs of interest for researchers since a long time. Though, detailed morphometric studies about adult lung weight are there in the literature but weight of lungs at different stages in the foetal period is far less available. Hence, the present study attempted to find out the relationship between the foetal lungs in relation with its development in different gestational weeks. The study was carried out on 40 human fetuses of known gestational age in the Department of Anatomy, Manipal College of Medical Sciences, Pokhara, Nepal. Ethical approval was granted by the Institutional Review Committee (IRC), MCOMS, Pokhara. The weight of the fetuses and fetal lung was measured in grams on digital weighing machine. The mean values of all parameters by gestational age was calculated and analyzed. The data was represented graphically by using appropriate statistical analysis. In the present study the body weight of fetuses showed gradual increase from 10th week to 38th weeks of gestation. The weight of right lung was seen more than the weight of left lung throughout the gestational weeks. Evaluating body and organ weights and measurements against known standards is an important part of perinatal pathology and also provides new insights for understanding and developing knowledge in both normal and pathological conditions.

The lungs are essential organs of respiration, situated on either side of the heart, and occupy most of the thoracic cavity [1]. The right lung is divided into superior, middle and inferior lobes by its oblique and horizontal fissures. The left lung is divided into superior and inferior lobes by its oblique fissure [2]. The adult right lung usually weighs 625 gm, and the left 565 gm [3]. Lung volumes in children vary significantly according to race [4] and lung volume increase linearly with body length [5]. Pulmonary agenesis is a rare congenital abnormality in which lung parenchyma are undeveloped [6]. The development of lung starts as early as fourth weeks of embryonic life from a respiratory bud and continues into postnatal life up to early adulthood [7, 8]. Fetal lung is one of the organs of interest for researchers since a long time. Since the growth of lung in human fetuses with respect to the gestational weeks in the previous literatures were found to be lacking, hence the present study was done to find out the growth of fetal lung in relation with the gestational week in developing human fetuses.

The present study was carried out on 40 normal human fetuses, aged between 10th to 38th gestational weeks in the Departmen of Anatomy, Manipal College of Medical Sciences, Pokhara, from March 2017 to August 2018. The normal fetuses were obtained from the Department of Obstetrics and Gynecology, Manipal College of Medical Sciences Teaching Hospital, Fulbari, Pokhara and the fetuses were collected in 10 x0025; formalin for carrying the study.

The study was approved by the Institutional Review Committee (IRC) of Manipal College of Medical Sciences (MCOMS), Pokhara, Nepal.

The fetuses included the spontaneous abortion and still born foetuses. Cases with any anomaly or pathology were not included in the study.

Determination of the Age of Foetuses

The age of foetuses was calculated from the obstetrical history, crown rump length (CRL) and crown heel length (CHL).

The dissection was done according to the Cunningham's manual of practical anatomy 15th Edition and the lungs were removed [9].

Weighing of Fetal Body and Lung

The weight of the foetuses and fetal lungs was measured in grams on digital weighing machine.

All the data were represented as mean then analyzed with MS Excel 2007 software and represented graphically.

Table 1: Showing mean body weight, weight of right and left lung and ratio of both lung and fetal weight.1 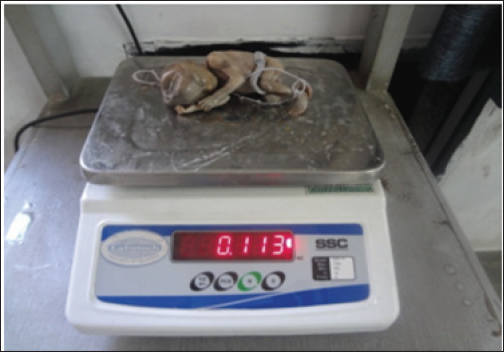 Figure 2: Dissection of foetuses and removal of lungs. 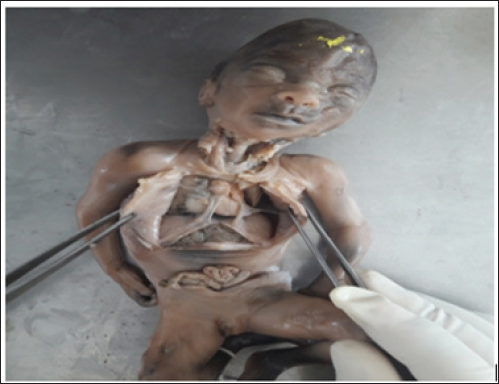 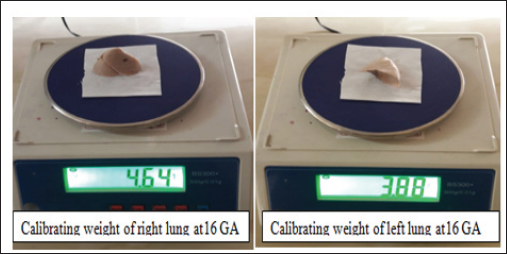 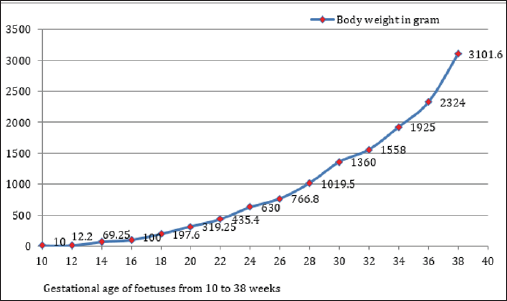 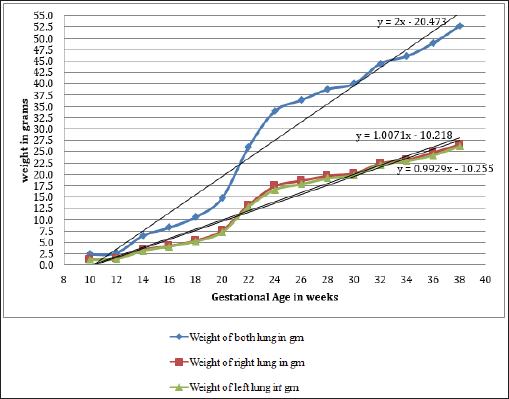 Increase in fetal weight as well as organ weight is a good indicator of fetal growth in general. Rate of weight gain during 1st, 2nd, and 3rd trimester differs considerably. In the present study the body weight of foetuses showed gradual increase from 10th week to 38th weeks of gestation. The rate of growth of right and left lung showed a minimal value of about 1.80 gm up to 12th g. w. and thereafter showed a gradual increase from 14th to 20th g. w. and then showed a moderately rise and was found to be almost similar up to 24th g. w. recording an average weight of 18 gm. Throughout the gestational period, the growth rate of right lung was found little faster than that of left lung. At 38th g.w., the right lung recorded 26.6 gm whereas the left lung recorded 26.2 gm. The linear graph in Figure 4, shows the comparison of growth rate of left and right lungs with increase in gestational weeks in human foetuses.

In the present study, the differential growth rate of the lung weight/body weight ratios with increase in gestational weeks was observed as follows: a mild fall was there from 10th to 14th g.w., then a gradual decrease from 14th to 18th g.w. Thereafter, a moderately increase was seen from 22nd to 24th g. w. and then a gradual fall up to 28th g.w. Then, there is a gradual decrease from 28th g.w. to 30th g.w. and finally remained almost constant up to 36th g.w. The ratio becomes 0.01 at the end of 38th g.w. Tanimura et al. [10] reported that the lung weight to body weight ratio was found to be increasing and then decreasing and the ratio reached the maximum at 12-14th weeks of gestation [10], which is almost similar found in conformity with the finding of the present study except for some findings in some weeks of gestation which may be deviated due to difference in sample size of study, genetic and environmental factors which may affects the fetal and lung development.

The results of the present study compare closely with smaller studies which was done by Shepard TH et al. [11] Another study which was done by G. Mitropoulos et al. [12] was that all organ weights/body weights were found almost constant after 30th weeks gestation, which is found to be in conformity with the finding of the present study. In conclusion, we confirm that in the normally developing foetuses the body and lung weight increases with advancing gestational age, but the weight of right lung was seen more than the weight of left lung throughout the gestational age. Evaluating body and lung weights and measurements against known standards is an important part of perinatal pathology. It also provides new insights to the anatomist and clinician for understanding and developing knowledge in both normal and pathological conditions of pulmonary tissue.

The author expresses special thanks to all the faculties and non-teaching staff members of Anatomy Department, MCOMS, Pokhara for their guide and support.