Seizures are the most common pediatrics neurologic disorder in children who are suffering at least one seizure in the first 16 years of life. Anyone at any age can have a seizure in certain circumstances, such as in meningitis, alcohol withdrawal, and other acute situations that anyone can experience. Survival analysis typically focuses on time to event data and recurrent events is a multivariate survival analysis in which event occurs more than once per subject over follow-up time. The study of recurrent events data is of particular importance in medical statistics. The most crucial issue in recurrent data is a correlation between relapses of each subject. This study aimed to identify some risks factors of the recurrent times of childhood seizures by fitting copula models using a Bayesian approach. In a retrospective study, Data of 300 seizure children who had at least one relapse within the study period has been analyzed. In this study, we modelled the joint distribution of recurrent events using parametric copulas within a Bayesian framework.

Results indicated a positive correlation between successive gap-times. The age at the beginning of the reception, sex, history of hospitalization, taken drugs, family history, evolutionary status and fever during the seizure were significant on the hazard of recurrent times to relapses. Results imply that according to the DIC criterion, the Basic Weibull-Clayton model was selected as the more suitable model. Existing correlation between relapse times requires continued efforts. To decrease relapse probability especially in children who experience relapses when have not taken drugs, children without history of hospitalization, children with fever during their seizure, who have family history of seizure, who have delay evolutionary status, the age at the beginning of reception of children higher than ten years and girl's special preventive and treatment efforts is recommended.

A Seizure is a transient, involuntary alteration of consciousness, behaviour or autonomic function caused by an excessive rate and hypersynchrony of discharges from a group of cerebral neurons. It is resulting from abnormal excessive or synchronous neuronal activity in the brain. During a seizure, cerebral blood flow, oxygen and glucose consumption, carbon dioxide and lactic acid production all increase. Brief seizures rarely produce lasting effects on the brain. Termination of the seizure is the first priorities in patients who are actively seizing [1]. Acute symptomatic seizures are secondary to an acute problem affecting brain excitability such as electrolyte imbalance or infection. Epilepsy is defined as recurrent, unprovoked seizures. Epileptic seizures are generally classified as focal (or partial), arising from one region ofthe cortex, or generalised seizures, which occur from both hemispheres, simultaneously [2]. Several cross-sectional studies have demonstrated that psychotic disorder and other psychiatric conditions for which antipsychotics may be prescribed are more common among people with epilepsy than in the general population [3]. Information about the seizure risks associated with newer antipsychotics is scarce [4]. Seizure relapses commonly occur in patients following long-term seizure remission. Treatment history and duration of epilepsy are predictive risk factors for both seizure relapses and the development of drug resistance [5].

Cumulative incidence studies under 15-year-old children indicate that 1.0-1.7% of children have had at least one seizure and 0.7-0.8% have had recurrent seizures [6-9]. Many studies have examined the risk of recurrence of seizures. The wide variation found in the risk of recurrence among those who have had first seizure seems to be explained by differences in study design or differences in the characteristics of the study groups. Overall, about 35 percent of patients with first seizure can be expected to have a second within the subsequent three to five years, although the risk varies from less than 20 percent to 100 percent, depending on clinical characteristics [10-12].

Recurrent events are the natural outcomes in many biomedical and epidemiology studies. Modelling and analysis of gap-times, times between successive frequent events, is attractive in specific settings. Renewal processes focus on analyse the gap-times between consecutive events [13]. Analysis of successive gap- times conditional on event history is extensions of the renewal model to deal with dependent gap-times [14,15]. Few studies have assessed time to recurrent events, remission and recovery of patients using Cox regression model, but most of them failed to account the repeated feature of relapses and correlation caused by frequent events within- subjects [16-18]. Some individuals are more prone to experience their next disease relapses more quickly than other individuals. It implies heterogeneity across individuals and produces within-subject correlation in the times of recurrent events of the subject [19,20]. Frailty and copula models incorporate heterogeneity into the model affecting the parameters estimates [21].

The Copula-based approach allows to decouple the marginal distributions from the dependent structure and thus provides a direct interpretation of covariate effects on marginal distributions as well as on the multivariate association [22]. Estimation of copulas can be achieved fully parametrically by assuming parametric models for both the copula and the marginal, whereas nonparametric estimation specifies a parametric copula while leaving the marginal nonparametric [23]. An attractive Bayesian alternative is to construct inference from the joint posterior in a Monte Carlo function [24]. In this study, we have used the Clayton copula model with both parametric and nonparametric marginal baseline hazards using the Bayesian approach which accounts for time-dependent covariates and heterogeneity in repeated relapses of seizure disorder.

In a retrospective study, data in documents of 300 seizure children who had referred to Rofeideh and NoorAfshar Hospitals, Pegah children's Specialty Clinic and children's medical Centre in Tehran from 2014 to 2016 who have had at least two relapses were investigated and time to recurrent relapses was registered per days. The first relapse of each patient is considered as the entrance to the study. In a gap-times approach, the time at risk starts at 0, but the length of the time at risk has corresponded to the time since the end of the previous event [25].

In the Bayesian approach, it is possible to estimate the marginal hazards and the copula parameters simultaneously. Marginal baseline hazards are modelled parametric as well as nonparametric. To fit different models to data, we started with the basic Weibull- Clayton model denoted by w° .

In this model, we assumed the same Weibull (ρ,γ) baseline distribution for all marginal failure times with shape parameter ρ>0 and scale parameter β where βƔR. As the copula parameter tends to infinity, the dependence becomes maximal and as copula parameter tends to zero, we have independence. Even though copula densities are not included in WinBugs, one can still specify the nonstandard likelihood function by using the "zeros trick". The posterior estimates for the different models are based on 5000 MCMC iterations after a burn- in period of 5000 iterations.

In model W which is called independence copula model, the copula parameter is zero (α=0). More flexible alternatives to the parametric models mentioned above are semi-parametric approaches using a Piecewise Exponential (PE) marginal baseline distribution. In contrast to the Weibull distribution that allows only for increasing or decreasing baseline hazards, the piecewise exponential model can approximate hazard functions with any shape. In this case, we define P, P with non-parametric marginal baseline hazards that correspond to the parametric models W° and W. According to the DIC criterion, we will choose the best model that fit the data well. R 3.4.1 software was used to analyse data and WinBugs used to estimate the parameters in the Bayesian approach. For R software we used copula and WinBugs packages.

Table 1: Frequency of risk factors and some relapses in children with seizure disorder. 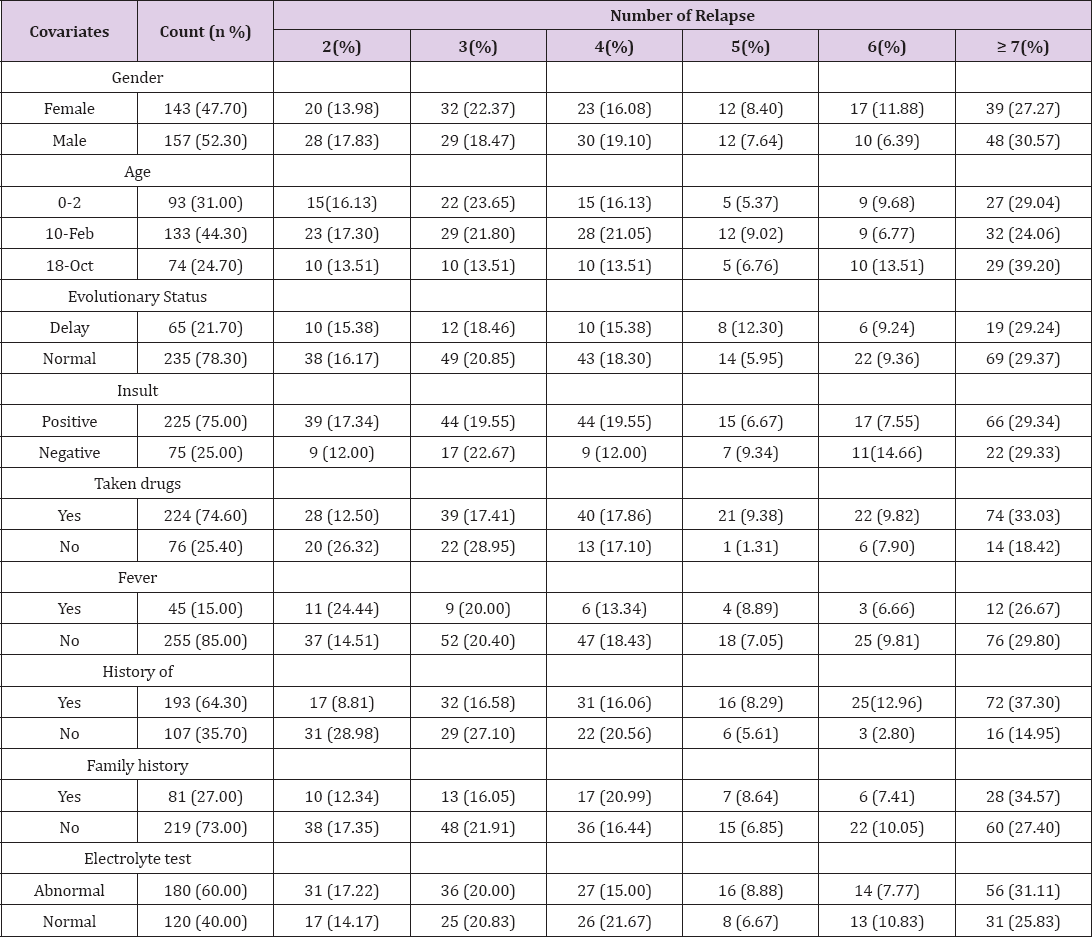 In models W° andWj estimates of the shape parameter p of the Weibull distribution are smaller than one, implying decreasing of marginal hazard function over time. It means without considering any covariates in study, the marginal hazard of next relapse decreased by time. In model W a Clayton copula parameter value of 0.521 and CI= (0.408, 0.641) corresponds to a Kendall's tau of 0.206 indicating small positive correlation between successive gap- times. 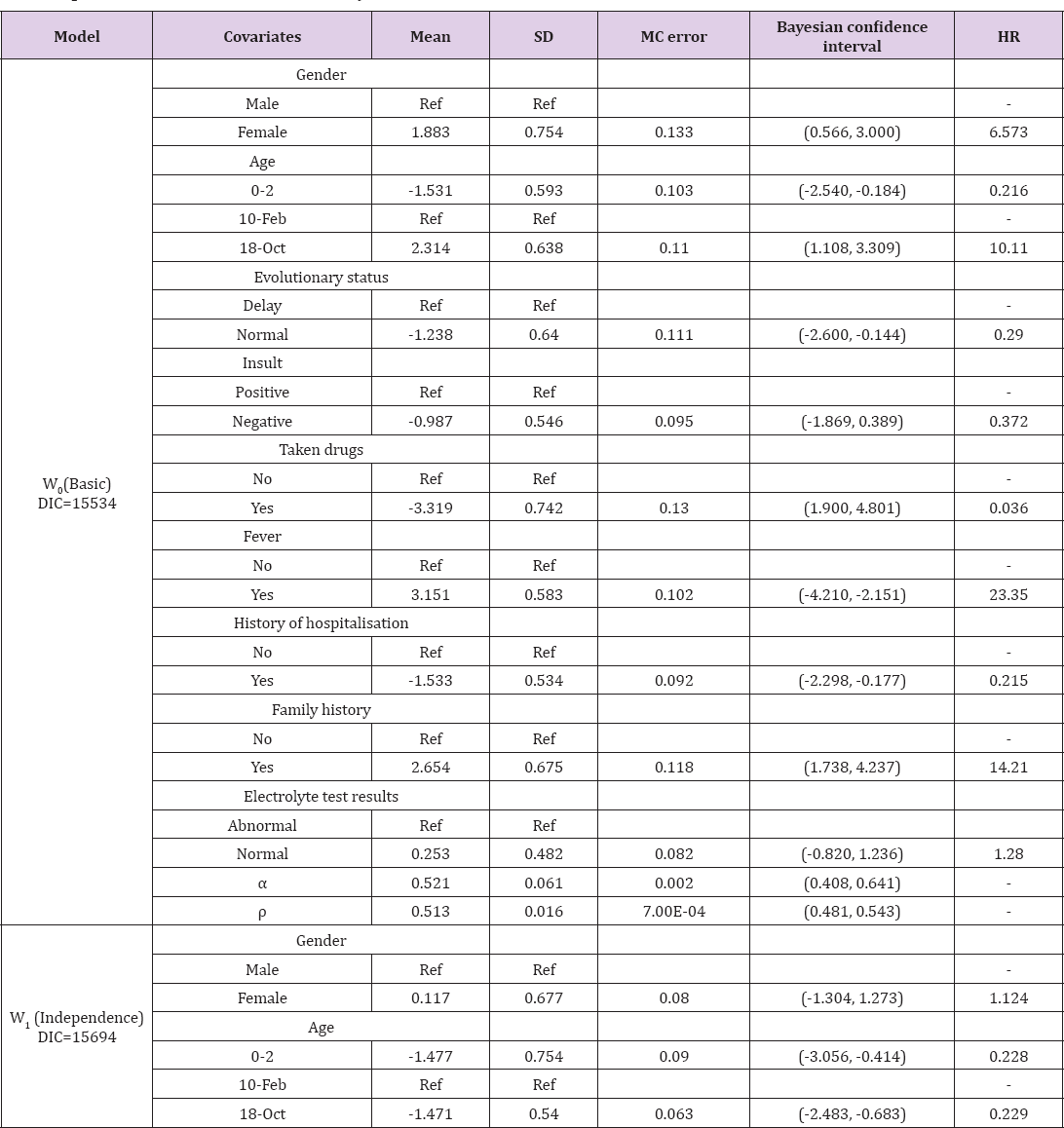 In model pe° , a Clayton Copula parameter value of 0.263 corresponds to a Kendall's tau of 0.116 indicating small positive correlation between successive gap-times. 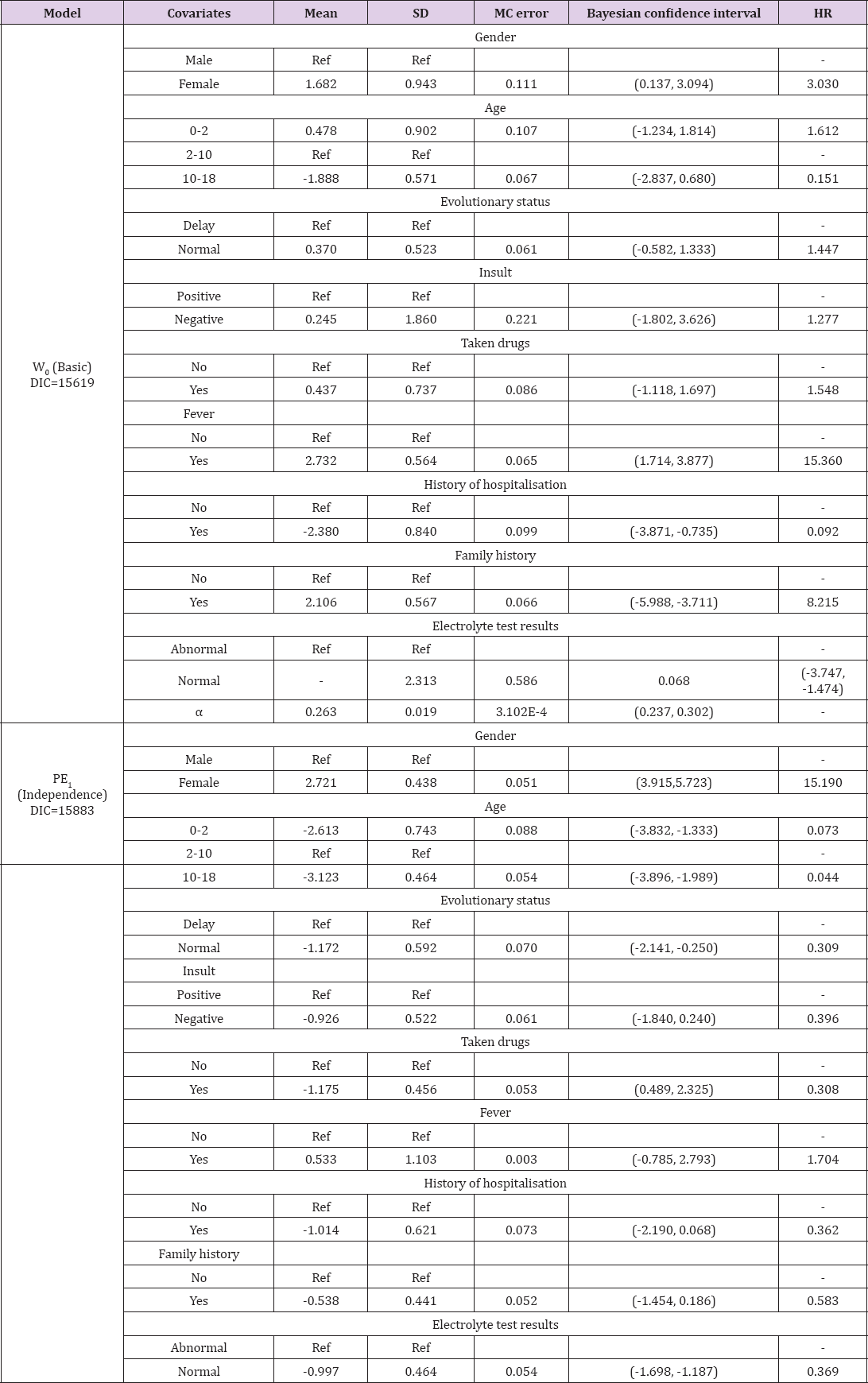 Epilepsy is a disorder of the brain, a sudden change in the brain of the electrical system. The brief malfunctions may temporarily block a child's awareness of time and place. The kind of seizure of a child depends on where the electrical disturbance takes place in the brain. In many cases, seizures and epilepsy be successfully treated, but children often face unique challenges in living with an adjustment to the condition [26]. In recent years, many studies conducted in epileptic children for determining the parameters and especially the risk factors affecting seizure relapse after Antiepileptic Withdrawal Drugs (AEDs). Reports in the literature imply that seizure relapse rates were different according to epilepsy types with being lower in simple partial epilepsy [27]. We have found that taken drug had a significant effect on the hazard of recurrent time to relapses. This result was in opposite to the previews study which reported no significant differences for seizure relapse rate after antiepileptic drugs consumption [28].

In this study, we found that children with fever during their seizure had a higher risk for seizure relapse than children without fever during their relapse declines, so fever during the seizure was another powerful factor which had a significant effect on the hazard rate of relapses. It was close to Hassanpour and Ghafrani study reported fever and onset of seizure could be a risk factor in recurrence of febrile convulsion [32]. We found there was a significant association between seizure relapse rates and the family history of seizure. Some reports are suggesting that the history of epilepsy in the family is a risk factor for seizure relapse [33]. We have outlined a new copula-based in Bayesian approach for modelling recurrent failure time data. To the best of our knowledge, Lawless and Yilmaz have tried a Copula-based approach to recurrent failure time data for the bivariate case using a two-stage frequentist approach [34].

Here, we generalized the copula likelihood for recurrent data to more than two events, where the total number of recurrent events per child does not necessarily have to be the same for all children but with the restriction that only the last event can be censored. In this study, we used parametric and nonparametric marginal baseline hazards with a Bayesian framework for several covariates, while Meyer and Romeo have used this framework only for treatment covariate [22]. Although we used a Clayton copula in this study to demonstrate our methodology, the approach is general and goes beyond the Archimedean copula family. The use of elliptical copulas with serial correlation structure and potential negative serial correlation might be more appropriate for specific recurrent failure time data.

In conclusion, the risk factors associated with seizure relapse are of paramount importance for the decision of treatment discontinuation. In our study, taken drugs and medication, the age at the beginning of reception, sex, history of hospitalization, evolutionary status, family history of seizure disorder and fever during the seizure are the risk factors associated with seizure relapses. Comparing DIC values for the Weibull and PE models, the Weibull models give better fits than their nonparametric counterparts. According to the DIC criterion, the best model to fit these data is a Basic Weibull Clayton model.

The study was supported by the Children's Medical Centre, Rofeideh and Noor Afshar Hospitals, Pegah Children’s Specialty Clinic in Tehran. We wish to thank the Managers and staffs of these hospitals for their approval and support.