Objective: To test the use of the MT surgical articulator manufactured by Bio art, a company located in Sao Carlos, SP, Brazil, as an efficient and reliable method for model surgery and to compare the values obtained to those obtained with the Erickson platform.

Results: The Lin coefficient obtained in the comparison of the measurements of the guides constructed on the Erickson platform to those obtained with the MT surgical articulator was 0.99721, with the maximum degree of concordance being 1.

Orthognathic surgery is a procedure of a medical/hospital nature consisting of various stages. One of them is model surgery whose objective is to obtain a surgical guide. The surgical guide provides to the surgeon the new position that the bone segment must occupy in the three-dimensional geometric space. Model surgery for obtaining the surgical guide can be performed in the semi-adjustable articulator [1] or on the Erickson platform (EP), [2] the latter being the method traditionally used more frequently for model surgery and considered to be the gold standard. Separate modifications of the structure of the semi-adjustable articulator have been suggested in order to facilitate the execution of model surgery with this device [3-5]. From this same perspective, surgical articulators have been devised for the specific execution of model surgeries [6-12]. However, no studies have compared the results obtained with these articulators to those obtained with the gold standard method. 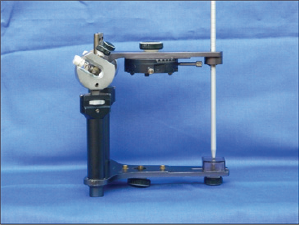 The MT surgical articulator (MTSA) manufactured by Bio-Art (Figure 1), a company located in Sao Carlos, SP, Brazil, consists of a platform fixed to the upper frame which permits the movement of the upper model in the anteroposterior, lateromedial and rotation direction and of a mechanism in the posterior rods that, together with the incisal pin, permits vertical adjustment. The objective of the present study was to determine whether the MTSA can be used as an efficient and reliable method for model surgery [13]. This was a comparative prospective double-blind study comparing the values obtained with the MTSA to those obtained with the EP.

A pair of Rocky Mountain acrylic models was mounted on the MTSA in Angle class I normal occlusion. The incisal pin of the articulator, as well as the posterior rods, were adjusted to 5.0 mm, creating a space between the models of the upper and lower dental arches [14]. Optosil heavy bodied silicone was manipulated and placed on one of the arches. By closing the articulator, the indentation of the arches was recorded on the silicone, producing the standard guide (SG).

Starting from the above occlusal position, some disocclusions were performed in the MTSA with jaw movements, simulating model surgeries by means of adjustments of the adjustable platform, of the mechanism of the posterior rods and of the incisal pin. Six types of jaw movement were produced in the following directions with 5.0 mm of movement increment: posteroanterior (advancement), posterior intrusion, total intrusion, unilateral left intrusion, left laterality, and right rotation. A guide was prepared for each of these disocclusions in the same way as described for SG production.

The upper Rocky Mountain model was duplicated, providing six type IV plaster models. Using as reference the SG coupled to the lower Rocky Mountain model fixed in the lower frame of the articulator, each of these models was positioned by fixing it with type I plaster in the respective mounting plate of the upper frame of the articulator. The six plaster models were used for model surgery in the EP performed in the traditional manner, with the same six types of maxillary movement being produced as done with the MTSA, and with the surgical guides being obtained as described earlier.

The following reference dental points were marked and measured on the guides: apex of the mesiovestibular cusp of the first left upper molar; apex of the mesiovestibular cusp of the first right upper molar; apex of the cingulum of the incisal surface of the upper central incisor close to the dental midline. For the determination of guide measurements on a three-dimensional geometric space, the points were measured on three planes, i.e., vertical, horizontal and transverse, using two EP. The first had a tip adapted to the caliper for measurement on the vertical plane. The lower Rocky Mountain model was mounted on the base of the EP and the guides were positioned one at a time, perfectly fitting into the lower model. The first EP was used for measurements on the vertical plane and the second for measurements on the horizontal and transverse plane.

The Lin coefficient was used [15] a method developed for the validation of measurements made with new instruments by comparing them to those obtained with well-established methods (gold standard). This coefficient is also used to determine the concordance between two pairs of measurements of the same samples at different times. The value of the concordance coefficient can vary from -1 to 1, with 1 indicating maximum positive concordance [16]. Thus, we compared the guides obtained in the EP to those obtained in the MTSA, the guides obtained in the MTSA to the desired value and those of the EP guide to the desired values. The results were plotted graphically for visualization of the Lin coefficient.

Table 1: Mean measurements (mm) obtained on the surgical guides of the Erickson platform and of the MT surgical articulator and mean desired value as the goal for each type of movement with 5.0 mm of increment. 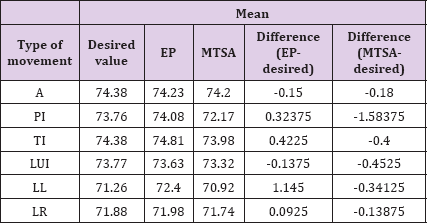 Figure 2: Correlation between the value of the measurements of the surgical guide obtained on the Erickson platform and the desired value. y = -0.63 + 0.995x 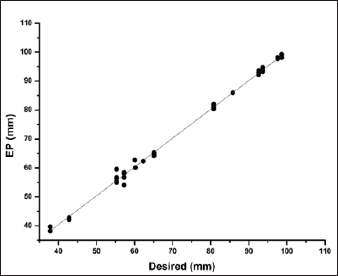 Figure 3: Correlation between the value of the measurements of the surgical guide obtained on the MT surgical articulator and the desired value. y = -1.11 + 1.01x. 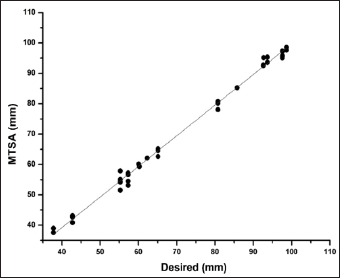 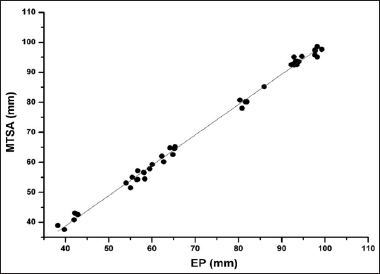 The measurements of the surgical guides obtained in the EP and the MTSA were compared. A correlation graph was obtained (Figure 4) and the Lin coefficient was 0.99721, thus showing that the guides were identical. Two other correlation graphs were also used to demonstrate the correlation between the measurements of the surgical guides obtained with the EP (Figure 2) and the MTSA (Figure 3) and the respective desired values. The Lin coefficient was 0.9985 for the EP and 0.9976 for the MTSA, confirming that the two methods are efficient and yield identical results. The EP is an excellent method which has been used for more than 30 years for model surgery with excellent results. The MTSA is a method whose results have been confirmed here to be the same as those obtained with EP, although they can be obtained in a less laborious, more rapid and mainly safer manner. The "just in time" visualization at the time the movement is performed permits corrections when necessary, thus avoiding unpleasant surprises at the time of in vivo surgery.

a) There was no statistically significant difference between the measurements of the guides obtained on the Erickson platform and on the MT surgical articulator.

b) This result validates the use of the MT surgical articulator.