Background: Higher cardiac as also general mortality in eastern regions of Finland than in the west, has been decades without satisfactory explanation. High number of annual rainy days (RD) and lower serum vitamin D values has been associated with East Finland relative to South Finland. Enrichment of dairy products was begun in 2002. In this study has been assessed regional CHD mortality (a sign of CHD morbidity) from 1964-84 [CHD. (64-84)] and CHD morbidity from 2012-14 [CHD. (12-14)], their association strength and stability with latitude (Lat), longitude (Long), altitude (Alt), RD and groundwater silicon (Si.gw). Areal parts of Uusimaa were combined to one unit, as respectively by Varsinais-Suomi. Number of area units was 18.

Conclusion: CHD morbidity showed high inter-regional stability between several decades and was associated significantly with the number of RD in both periods and suggested on CHD association with serum vitamin D content. Anyhow decrease in CHD E/W ratio until period 2012-14 was mostly occurred before D-vitamin fortification. Serum vitamin D [S-25(OH)D] indicates not only allowance (per os & per skin) of vitamin D, but regulating factors, as Se, too. Changes in CHD E/W ratio during 1962-2002 associated with allowance or fertilization of Se. A new CHD risk factor Alt, with high association with Si.gw is presented. Calculated conclusions are based on supposition that CHD morbidity index can reflect contemporary CHD mortality.

Higher cardiac morbidity in eastern regions of Finland than in the west, has been decades without satisfactory explanations [1] . This east-west difference has been reported to have been decreased by men from 1.36 to 1.26 in 1973-2002, but not by women [2]. In period 1993-97 this risk ratio by men was still 1.33 [2] . High number of annual rainy days (RD) in East Finland has been suggested to reduce vitamin D synthesis and affect on CHD and general mortality [3]. In 1980 highly signicantly lower vitamin D values have been reported from East Finland relative to South Finland [4] (Table 2): [N cases; S-25(OH)D; standard deviation)]: [95;19;1.6] contra [89;24;2.7]. Fortification of liquid dairy products with 0.5 mcg vitamin D/100 g and fat spreads with 10 mcg/100 g started in Finland in December 2002. In 2010, the fortification recommendation was doubled [5]. Dependence of S-25(OH)D on moderate Mg and Se level is often passed [3]. The aim of this study is to clarify CHD associations with Lat, Long, Alt, RD and Si.gw and discuss the participating factors.

Area units in this study are principally Finnish continental Rural Centers (N 20) as follows: Provincial CHD mortality data of Finnish middle-aged men in 1964-84 are from Valkonen and Martikainen (1990) [6] as in [7,8]. Approximate male CHD data by Rural Center (RC) - earlier Agricultural Advisory Centers - are attained by benefiting provincial values as such when RC was totally inside of one province (N 17), in other cases (N 3) by weighting the CHD values of different provinces by their cropland areas, which were inside the RC in 1988 [7]. The data on cropland areas, as map and label numbers (with one exception: Åland does not include in RC 04, continental RC 04 is labeled as 04.a.) are from [8] as in [7] and calculated as follows:

CHD. Keski-Pohjanmaan = (45.7*CHD.Vaasa+23.7* CHD. Oulu)/ 69.4. (N.B. CHD values of [9] in Table 1, but not figures of [9] included errors, because they were aimed for [10] with some combined RC's). Regional CHD morbidity indices in 2012-14 [CHD. (12-14)] from National Institute for Health and Welfare [11] are benefited as approximates for respective RC values. Latitude (Lat) (Figures 1 & 2) and longitude (Long) (Figure 3) of each RC have been determined by their central commune [12]. Alt was got via internet search: Name of central commune and "geographic coordinates" or "elevation above sea level". Map of annual rainy days from Finnish Meteorological Institute [13] was combined with the map of RC's [8], similar with the map of Finnish Regions [12]. Then approximate mean RD by RC was visually approximated (in Lapland by the central commune) (Figure 1). Thereafter Parts Uusimaa (RC 01 and and 02) and respectively parts of Varsinais- Suomi (03, 04.a) were combined by weighting values by the part- areas (Table 1). 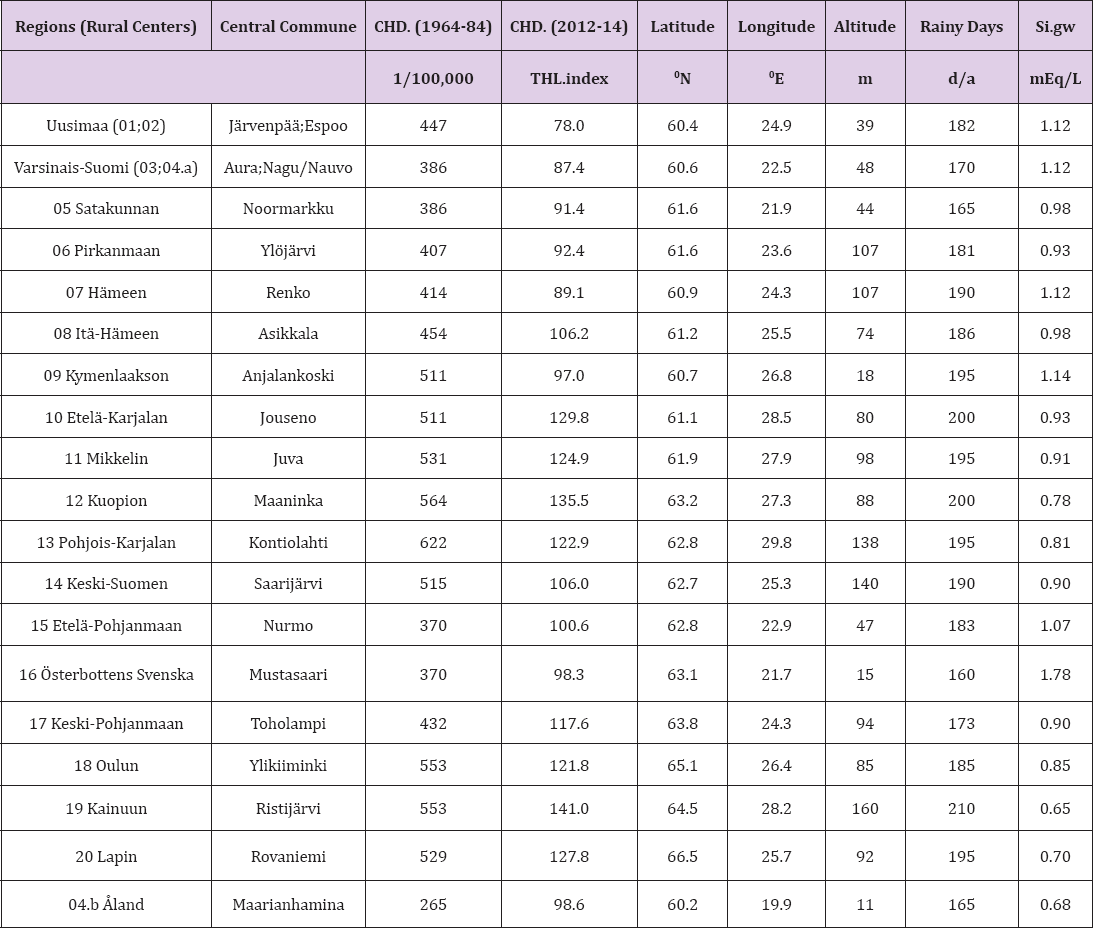 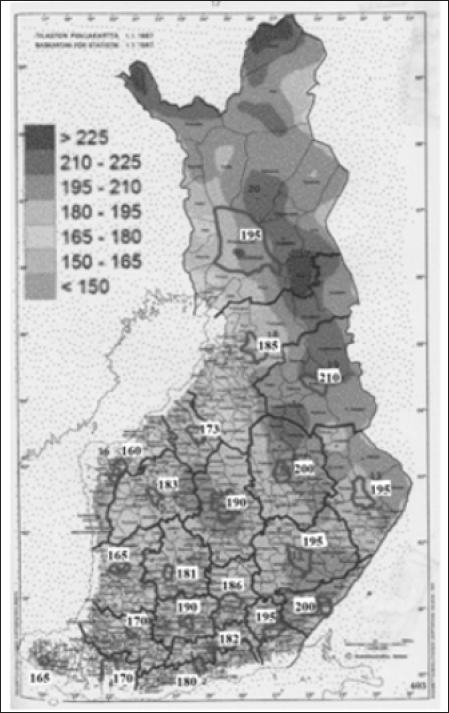 Figure 2: Association of latitude (Lat) with CHD in two periods. 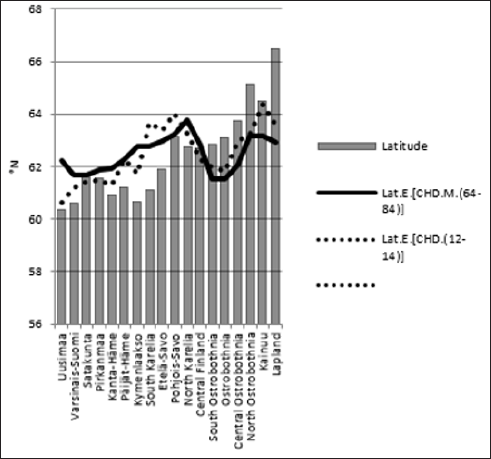 Figure 3: Association of longitude (Long) with CHD in two pe-riods. 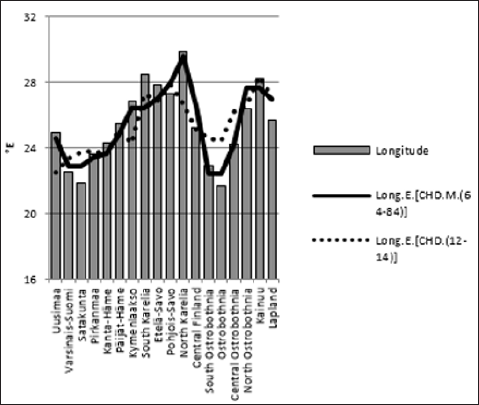 Figure 4: Association of altitude (Alt) with CHD in two periods. 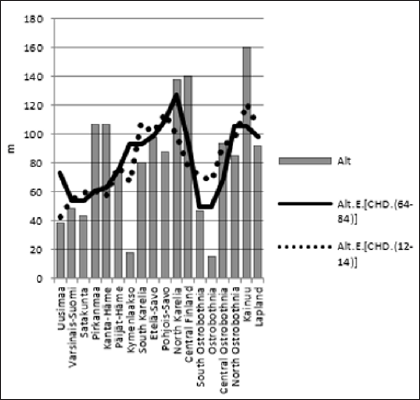 This study showed CHD stability in different decades and significant associations with RD, which is a factor with strong east association. Most soil and groundwater factors and temperature were associated nearer to south-north axis [1,7,9,10,12]. RD "explained" CHD stronger before (66.8%) than after (43.8%) vitamin D fortification (Figure 5). Cloudiness is known to reduce annual solar energy in Finland on an average 35% compared with cloudless sky [15]. So it can be expected that RD, a surrogate of cloudiness, could have reflected differences in regional vitamin D status of humans [3,4]. Anyhow after declining, CHD-Long factor remained as the strongest environmental CHD factor during the last period. Old school books wrote that rains are associated with altitude. In this study Alt explained significantly RD by 36.1 % (p<0.01) (Table 2). Alt explained about equally, unchanged, CHD's from both periods (33.5 %) and (33.2 %) (p<0.05). CHD east factors Long and RD were remarkably reduced between the periods, RD- CHD association ad 44.2, which is about the same as Si.gw-CHD association (38.2%) (Table 2). I.e. as during reduction of East factors (i.a. vitamin D) Alt factors (i.a. Si.gw) (Figure 6) remained unchanged. Higher altitude means water flow (and mineral element losses) outwards. So it can be understood that weathering, erosion, dilution are associated with Alt. Significant positive association with CHD's makes Alt a new CHD risk factor. Alt explained best Si.gw by 50.2 % (Table 3). 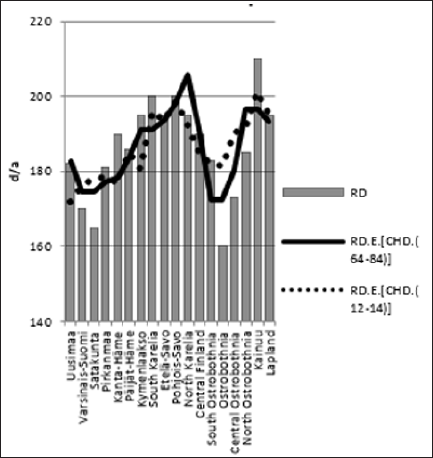 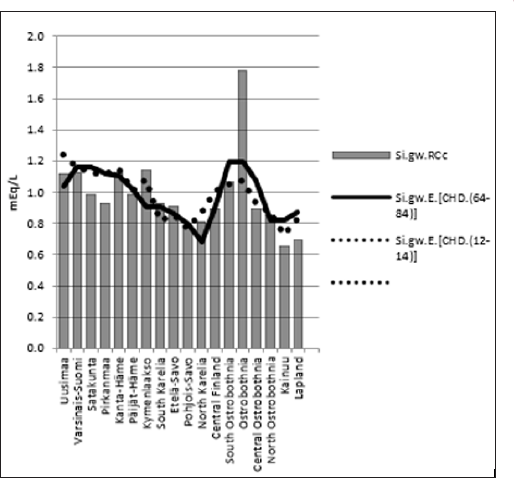 East-west CHD mortality ratio (CHD E/W) (Figure 8) was additionally assessed by male CHD data (3-year means) from 1962-86 [6] and Pajunen et al. [2] from 1973-2002. E/W ratio was calculated by means of provincial means, first by excluding Aland because of missing data. Then this ratio was adjusted to human values [2] by subtracting 0.014 from it: E/W ratio was in 196268 1.30, 1968 it increased to 1.35 and its 5-year means stayed above 1.33 until 1998. 1968 was associated with reduction of imported Se-rich grain [16]. After period 1978-82 it declined from level 1.37 to 1.34 associated with the beginning of Se fertilization [17,18]. The decreased to 1.26 after 1997 associated with the second increase of Se-fertilization (for non-cereals) [18]. The unexpectedly high difference in S-25(OH)D [4] between south and east was obviously not dependent only on vitamin D intake per os and per skin, but on proactive and counteractive factors, e.g. Mg, Se [3] and obviously Si [19,20]. Weight of vitamin D as a CHD. East factor seems to be much weaker than expected [3]. Silicon content of food was obviously decreasing in the 1960's with increasing total fertilization and increasing with decrease of total fertilization (after 1989), but changes were not as abrupt as in CHD E/W ratio.Comparing of mortality statistics with morbidity indices includes several problems/biases, which are passed in the assessment above because of their complexity. Data has been treated as if they came from the same data base. Interesting observetions: The moderate high CHD in Uusimaa provice (RS's 01 & 02) in 1964-84 could be dependent on migration, lower synthesis of vitamin D (high houses, indoor work), it is suspicious that vitamin D alone could explain it. Causes for CHD reduction before 2014 in Uusimaa could be based i.a. on higher vitamin D supply and possible validity problems with THL CHD index (big private sector - part of the use of private sector can stay out of study statistics). High CHD mortality of Kymenlaakso (RC 09) in 1964-84 together with good soil parameters [9] and its recovery until 2014 is in harmony with RD action in 1964-84 and later vitamin D counter-action. The residence specific CHD risk factor(s) [20] seem(s) to deserve attention and research work. In this chapter associations are calculated after exclusion of Aland with low and obviously misleading Si.gw values [1]. Even preliminary data from this summer suggest that Si content of milk from Aland (with low Si.gw and high Ca/Mg ratio in soil and gw) could be the higher than in continental Finland (Figure 7).

Figure 7: Association of CHD from two period with each other. 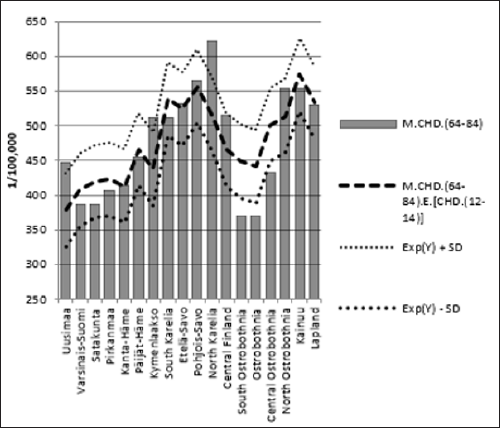 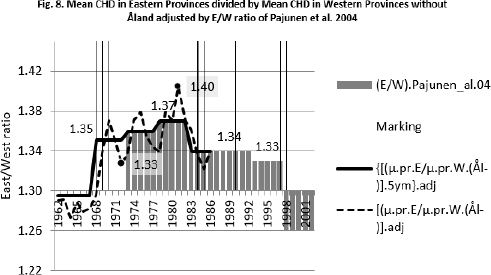 CHD morbidity showed high inter-regional stability between several decades and was associated significantly with the number of RD in both periods and suggested on CHD association with serum vitamin D content. Anyhow decrease in CHD E/W ratio until period 2012-14 was mostly occurred before D-vitamin fortification. Serum vitamin D [S-25(OH)D] indicates not only allowance (per os & per skin) of vitamin D, but regulating factors, as Se, too. Changes in CHD E/W ratio during 1962-2002 associated with allowance or fertilization of Se. A new CHD risk factor Alt, with high association with Si.gw is presented. Calculated conclusions are based on supposition that CHD morbidity index can reflect contemporary CHD mortality.