Steroid myopathy is a consequence of glucocorticoid administration and excess occurring in Cushing's syndrome. It is characterized by muscle weakness, which impairs patients' capacity to perform everyday activities. The relevance of steroid myopathy is very high especially given the large number of patients suffering from inflammatory diseases that are treated with glucocorticoids. The major pathogenetic mechanisms hypothesized are: imbalance between protein synthesis and degradation, impairment of mitochondrial function and redox imbalance. The triggers of the latter phenomena and muscle damage are still unknown. The latter issues are still unsatisfactorily settled mainly because analyses are mostly focused at times when steroid myopathy had fully developed making it difficult to take apart the phenomena causing the myopathy from those being a consequence of it. To identify the triggering mechanisms involved in the pathogenesis of steroid myopathy the very early stages of the phenomenon must be investigated. This short review describes the effect of short-term corticosteroid administration on muscle functional, structural and molecular adaptations in humans and mice.

This short review will focus on to the understanding the pathogenesis of the steroid myopathy.

a) Quantitative and qualitative adaptations of individual to the understanding the pathogenesis of the steroid myopathy. muscle fibers of healthy subjects to short-term glucocorticoid administration.

b) Molecular adaptations of isolated muscles from mice to a single glucocorticoid administration. The goal is to contribute

The work of Minetto et al. [1] was the first in vivo study to describe the effects of a week dexamethasone (DEX) administration on skeletal muscle of healthy subjects that comprised both mechanical and molecular analysis. Five young men volunteered to participate in the study. Muscle samples were taken from the dominant vastus lateralis (VL) muscle by needle biopsy using the Bergstrom technique. The voluntaries were subjected to 7 days of oral dexamethasone (DEX) (8mg once daily) administration. Dexamethasone was specifically selected, because steroid myopathy has been reported to be associated with the use of fluorinated steroids [2,3]. Chemically skinned individual muscle fibers were dissected from biopsy samples and analyzed in terms of their cross-sectional area (CSA), contractile properties of specific force (Po/CSA) [4] and quantification of myosin concentration [5]. After a week of DEX administration, type 2A fibers (the most representative in VL muscle) underwent atrophy, decreased their specific force, and decreased their myosin concentration (Figure 1).

Although muscle atrophy is a well-known side effect of a longterm glucocorticoid excess, this study is the first showing that the short-term administration of glucocorticoids, in doses well within the range used clinically, reduced muscle fiber CSA and myosin concentration, this has been observed previously in young healthy subjects after immobilization [5] and in atrophic fibers of elderly subjects [6]. Because the intervention duration was short, and all subjects continued their normal daily activities during the administration, it is unlikely that the decrease in CSA and the myosin loss were due to muscle disuse. A reduction in circulating muscle proteins points toward the anti-anabolic effect of glucocorticoids as the most plausible explanation for the decrease in CSA and myosin loss. Myosin loss and a decrease in acto-myosin interaction could also explain the observed reduction in specific force of muscle fibers. A further mechanism that could account for the reduction in specific force is impairment of excitation-contraction coupling. However, as the experiments were done on chemically skinned muscle fibers lack of excitation contraction coupling, the latter cannot be involved in specific force loss, and myosin loss remains the most likely

The obtained results suggest that the glucocorticoid-induced quantitative and qualitative adaptations of muscle fibers develops, even in healthy subjects, after only a few days of glucocorticoid administration.

It has been shown that the processes underlying steroid myopathy in humans develop just few days after glucocorticoid administration [1]. The next step was to establish a causal relationship between muscle structure and function alterations and specific molecular events. To address such issues, we studied steroid myopathy starting at very early times and through its developing in animals. C57BL/6 mice were subjected either to a "chronic" treatment or to an "acute" treatment by DEX. In the chronic treatment, mice were subjected to daily peritoneal injections of DEX for 3, 7 and 15 days and analyses were performed 24 hours after the last injection in order to assess the degree of muscle atrophy. In the acute treatment, mice were subjected to a single DEX injection and analyses of steady state adaptations in gene expression of key components of intracellular pathways controlling muscle mass and metabolism were performed 1, 3 and 10 hours after the injection.

The major intracellular signalling pathways controlling protein degradation (Foxo3a, Murf-1. Atrogin1), protein synthesis (AKT/ mTOR, and Myostatin) muscle metabolism (Pgc1a, citrate synthase) and redox balance (Nrf2, Sod1, and Catalase) in response to DEX treatment were studied in VL and soleus muscle (SOL). Results showed: (i) The presence of atrophy in both muscles after "chronic" DEX treatment (Figure 2) and (ii) An increased expression of MuRF-1, activator of the ubiquitin-proteasome protein degradation system (UPS) and Myostatin, an inhibitor of protein synthesis, in both muscles, 1 hour after a single injection (Figure 3). Results suggest that the effect of chronic administration of dexamethasone (atrophy) could be due to the sum of the effects of repeated acute administrations causing the reprogramming of the activity of intracellular pathways controlling muscle mass [7]. 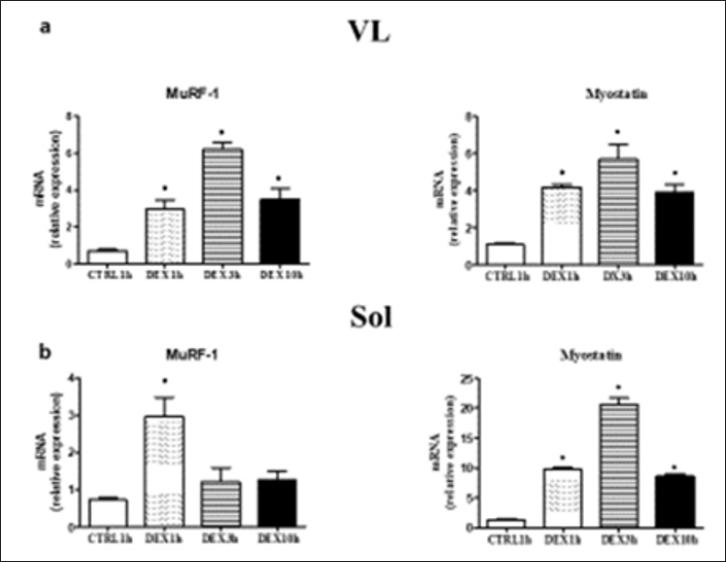 Collectively the studies had shown that:

So far, no drug has proven successful in counteracting the development of steroid atrophy. More work is needed to text a potential therapy able to counteract the altered intracellular signalling pathways and atrophy following DEX treatment.