Materials and Methods: 35 chronic pancreatitis patients and 16 healthy individuals were included in this study, performed since 2015 to 2018. All patients were examined three times with three months intervals. During the initial examination, blood samples were taken for complete blood count, biochemical and coagulation markers, and color Doppler ultrasound performed to evaluate portal venous velocities. Ultrasound examinations were repeated later twice.

Results: Both groups were homogenous based on weight, body mass index and age. Laboratory blood test results were also insignificant, except for D-dimer concentration, which exceeded normal values in chronic pancreatitis group. Portal venous velocities did not differ between groups. Vmax and Vmean were slower in case of chronic pancreatitis, but the difference was not significant: 59 ± 24,2 cm/s vs 67,5 ± 21 cm/s in healthy controls (p=0,554); and 20,8 ± 7,7 cm/s vs 24,5 ± 8,2 cm/s (p=0,322) respectively. Biochemical markers had no significant effect on portal venous velocities.

Conclusion: Chronic pancreatitis has no effect on portal venous velocities.

Chronic pancreatitis (CP) is a progressive chronic inflammation of pancreas with continuous fibrosis of pancreatic parenchyma that consequently deteriorates exocrine and endocrine functions of this organ and severely disturbs patients' quality of life [1,2]. Majority of CP cases, both worldwide and even more in Europe, are associated with heavy alcohol consumption, therefore longitudinal follow-up of such patients is quite complicated [3,4]. The incidence of CP, according to various studies, varies from 4,4 to 13,4 per 100 000 and the prevalence ranges from 36,9 to 41,8 cases per 100 000 [5-15]. Yet it is now thought that both prevalence and incidence of CP are higher than previously noted. As median survival in case of CP ranges from 15 to 20 years, the annual prevalence should be between 120 and 143 cases per 100 000 [3]. Portal vein thrombosis (PVT), being the most common vascular disorder of the liver, is in 40% of cases associated with local factors, pancreatitis being one of them. However, pancreatitis is not very common cause of PVT, only about 13% of PVT cases are associated with pancreatitis in general [16].

According to literature, thrombotic complications are more common in case of alcohol induced, severe and necrotizing acute, and chronic pancreatitis [17-20]. Splanchnic thrombosis is diagnosed in 12-20% of patients with CP, with portal vein being obstructed less often than splenic and more often than superior mesenteric veins [21-23]. It is suggested that in case of CP, portal vein thrombosis can be induced by several interacting factors: local prothrombotic factors, damage of vascular endothelium by repeated acute inflammation, external pressure by the pancreatic pseudocyst, relatively slower venous velocities [21,24,25]. Yet, though there are both retrospective and prospective clinical studies on the obstruction of portal vein in case of chronic pancreatitis, none of them evaluated blood flow, only the fact of obstructed lumen, in case of this chronic condition [21-25]. Our aim was to assess whether chronic pancreatitis has any lasting effect on portal vein velocities thus in perspective increasing the risk of PVT

This prospective single centered follow-up study was performed from 2015 to 2018 in Vilnius University Hospital Santaros clinics. The local Lithuanian Bioethics Committee approved protocol of this study (No. 158200-15-774-291), and individual informed consent form was signed by each of study participants. The ethical principles of the Declaration of Helsinki for medical research involving human subjects were fulfilled [26]. 51 adult participants were enrolled in this study: 35 of them were diagnosed with CP, and 16 were healthy controls. Hospitalized in Gastroenterology and Hepatology department to replace the stent of the common bile or pancreatic ducts, with no signs or symptoms of acute pancreatic inflammation or cholangitis at the time, 35 CP patients were examined and portal vein velocities assessed. 16 volunteers who formed the control group were healthy individuals, with no signs or symptoms of acute or chronic pancreatitis, and no events of acute pancreatic inflammation in history. All participants with liver disease and/or its complications, myeloproliferative disorders, oncologic diseases, heart and circulatory diseases, coagulation disorders, and previous vascular disorders were excluded from the study on the basis of medical history, clinical and laboratory findings, and imaging of the liver, bile ducts, pancreas and other abdominal organs.

All patients were examined three times with three months intervals. At the time of initial examination, blood samples were collected for the laboratory tests: complete blood count, coagulation markers (activated partial prothrombin time (APPT), international normalized ratio (INR), prothrombin time (PT), fibrinogen, D-dimer), and biochemical markers (electrolytes, C-reactive protein (CRP), lipase, p-amylase and lactate dehydrogenase (LDH)). At the same day, first abdominal color Doppler ultrasound (US) was performed (Toshiba diagnostic ultrasound system, SSA-790A, Toshiba medical systems corporation, Japan) and later repeated twice during follow-up. All US examinations were performed and reviewed by the same gastroenterologist. US examination was performed for at least 6 hours starving participants, in the supine position during breath holding. The probe was applied at an insonation angle smaller than 60° in the middle part of the vessels. The main portal vein was assessed about 2 centimeters from the junction between the splenic and superior mesenteric veins. Left and right portal veins were measured 1-2 centimeters from their branching.

Each time, all abdominal organs were evaluated: liver, spleen, pancreas, as well as major hepatic vessels. Diameter, patency, and main measurements and indices of portal veins were evaluated: Vmax (maximum systolic blood flow velocity); Vpeak (peak systolic velocity); Vmin (minimal systolic velocity); Vmean (mean velocity); PI (pulsatility index); RI (resistivity index). All indices were measured three-times during each examination and arithmetical mean calculated for the most accurate result. Vmax, Vmean and RI were the measures that were used in statistical analysis and comparisons. Data handling and analysis were performed with SPSS version 12.0 software (SPSS Inc., Chicago, 1L). Quantitative variables are expressed as the mean (± standard deviation), or median and range, and qualitative variables as absolute and relative frequencies. Comparisons between groups of quantitative and qualitative variables were made by the Wilcoxon and chi square tests, respectively. All tests were two-sided, and p<0,05 was considered significant. 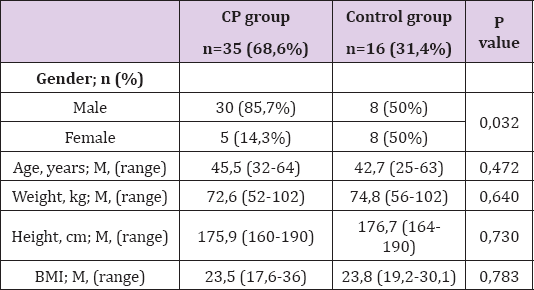 Figure 1: Vmax of the main portal vein during first US examination.

Figure 2: V mean of the main portal vein during first US examination.

No significant changes in Vmean were noticed during follow- up visits as well. Other indices - PI or RI did not differ neither between groups nor between all three examinations. Portal venous velocities did not correlate with demographic factors: gender, body mass index (BMI), and age. It was not significantly influenced by any of complete blood count parameters. CRP, fibrinogen and LDH, values of which differed significantly between two study groups, did not correlate with portal venous velocities as well (Figure 3). Though exceeding normal ranges, D-dimer had no effect on blood flow changes in CP group (Figure 3). 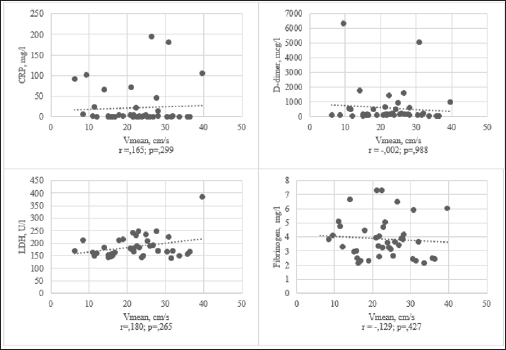 Though it was expected that over the time CP affects portal vein velocities and decreases the blood flow thus initiating obstruction of the lumen, based on our results, it has no significant effect on blood flow in portal system. During our follow-up period, not one case of thrombosis was observed. The biggest limitation here, of course, is small study sample - knowing the fact that PVT is quite rare in case of CP [21-23], it is not surprising we did not observe portal vein obstruction during our study time. Nonetheless, velocities showed no tendency toward reduced blood flow and increased risk of PVT According to our results, both Vmax and Vmean of main portal vein, its right and left branches were slower compared to healthy same aged individuals, however this difference was not significant, and the difference did not change during the follow-up period. In a study of 266 CP patients, who were repeatedly examined for thrombus, the incidence of PVT was 5,6%, and acute pancreatitis and caudal pseudocysts were the probable cause of spleno-portal vein obstruction in 91,4% of all cases [27].

Several other authors also stressed the effect of acute inflammation and mechanic pressure of pancreatic cysts on the development of PVT in case of CP [25]. In our study, were purposely excluded patients with cysts in pancreas and acute inflammation to evaluate the effect of chronic process only. We also aimed to find the relationship between biochemical markers and portal venous velocities. However, as no significant differences between study groups were observed comparing velocities, laboratory parameters were of no significant value as well. The only one to differ significantly and exceed the normal limits was D-dimer. A recent study (Zhang et al.) showed higher than 240mcg/l concentration of D-dimer was highly sensitive (100%) and had negative prognostic value when excluding PVT [28]. What is more, increased D-dimer concentration is associated with higher risk of venous thrombosis [29,30].