We present the case of a 38-year-old male who complained of repeated dizziness and syncope. Bow hunter syndrome (BHS) was diagnosed via computed tomography angiography (CTA) and three-position digital subtraction angiography (DSA). In the neutral position, CTA and DSA revealed left vertebral artery (VA) stenosis at the C2 transverse foramen and right VA hypoplasia. When the head was turned to the right, DSA showed that blood flow decreased at the C3-4 level and stopped at the C2 level. The bony structure around the VA at the C2 transverse foramen was decompressed via an anterior surgical approach, and the symptoms resolved. This case indicates that the stenotic point associated with BHS should be determined its exact stenotic point and surgical treatment should be individualized based on the stenotic point.

Dizziness triggered by rotating the head is a characteristic symptom of BHS. However, dizziness has many causes, and patients who complain of dizziness provoked by rotating the head should also be evaluated in terms of a peripheral disorder, such as benign paroxysmal positional vertigo (BPPV). General nystagmus and videonystagmography (VNG) are useful to rule out a peripheral disorder, allowing BHS diagnosis via identification of the characteristic nystagmus [1,2]. There are various treatment options, ranging from conservative treatment such as rehabilitation to surgery [3]. Decompression without fusion is the recommended first-line therapy [4], but the optimal method of VA decompression remains controversial. Although a posterior approach is generally preferred to decompress the VA at the C1-C2 level [4-6], Seki et al. described successful decompression of the C2 transverse foramen via an anterior approach. We present a case of BHS diagnosed via VNG, CTA and three-position DSA. The exact stenotic point was determine based on three-position DSA. The patient was treated via anterior VA decompression at the C2 transverse foramen, and a satisfactory outcome was achieved.

A 38-year-old male suffering from alcoholism visited our outpatient department complaining of repeated dizziness and a buzzing sound in the left ear. His first ear symptom was a hearing difficulty commencing 1 year prior. Dizziness and a buzzing sound developed when he turned his head to the right, commencing a few months prior. Sometimes, the dizziness was so severe that he could not open his eyes. Then, he failed to maintain balance and fell, losing consciousness for 3-4 seconds. On examination, we found that the symptoms appeared only when he turned the head to the right, whether he was standing, sitting, or lying. No symptoms were evident when the head was rotated to the left or in the neutral position. A down-beat nystagmus appeared when the head turned to the right. A left-ear hearing reduction and left-side, central facial palsy of House-Brackmann grade 2 were evident, as was a slight tremor of the right lower extremity.

We used VNG to determine whether the problem was peripheral or central. VNG revealed right- beating nystagmus with a downbeat component when the head was turned to the right (Figure 1), indicating a central rather than a peripheral origin.

We scheduled brain and neck CTA, brain MRI, and three-position DSA. CTA revealed a hypoplastic right VA and left VA stenosis at the lateral curvature of the VA just below the C2 transverse foramen. Brain MRI revealed a tiny, acute ischemic infarction in the right cerebellum. DSA was performed in three positions (with the head neutral, 90° to the left, and 90° to the right). In the neutral position, left VA stenosis was observed just below the C2 transverse foramen, as on CTA. Notably, when the head was turned to the left, the VA stenotic lesion became wider than in the neutral position. When the head was turned to the right, the blood flow tapered at the C3-4 level and was totally occluded at the C2 level (Figure 2). Immediately after angiography with 90° to the right, the patient loosed consciousness and DSA was halt. As the right VA was hypoplastic and flow almost absent, the posterior circulation was highly dependent on the left VA. We concluded that the left VA became kinked just below the entry point of the C2 transverse foramen when the head was turned to the right. We decided to perform surgical decompression of the left VA. 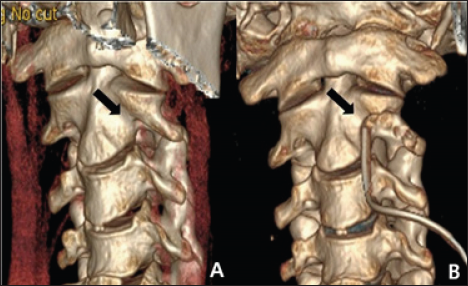 The patient was placed in the supine position with his head slightly extended via Holter traction. A transverse skin incision was created on the medial border of the sternocleidomastoid muscle at the C2-3 level. After dissecting the prevertebral muscles, the C2 vertebral body, left transverse process, and left VA were exposed. The anterolateral portion of the left transverse foramen that covered the VA was carefully drilled. The bony spicule at the lateral curvature of the VA just below the C2 transverse process was also removed. The anterior half of the bony structure surrounding the VA was fully decompressed, and VA pulsation immediately became more active. Postoperative CTA showed a wider transverse foramen than preoperatively (Figure 3). The symptoms improved dramatically after surgery. Neck movement was not limited, and no cervical spine instability was evident on a dynamic X-ray.

It is challenging to distinguish between nystagmus of peripheral and central origin; this requires consideration of various clinical symptoms and features. The direction of nystagmus after a positioning maneuver can point to a central disorder. Paroxysmal down-beat, up-beat, or pure torsional nystagmus is considered to reflect a central origin [7]. BHS-associated nystagmus is mostly down-beat, with both horizontal and torsional components toward the side of the compressed VA. Two explanations have been advanced. Compression of the dominant VA triggers acute bilateral vertebrobasilar insufficiency, but asymmetric ischemia of the superior labyrinth causes down-beating nystagmus. Similarly, inferior cerebellar infarction in a unilateral posterior inferior cerebellar artery triggers nystagmus with an ipsilateral horizontal component [2]. Our patient's nystagmus contained a down-beat component, and thus was not exclusively right-beating, suggesting a central origin. We suspected BHS of central origin because the symptoms were similar to those of nystagmus seen in BHS and suggestive of BHS. Therefore, we proceeded to a vascular evaluation including CTA, MRI and three-position DSA.

Rotatory VA stenosis at the C1-C2 level with reduced blood flow can be observed in normal individuals, reflecting relative immobilization of the VA at the C2 and C1 transverse foramina. During head rotation, the atlantoaxial joint is fixed, whereas the C1 contralateral transverse foramen moves forward and downward, kinking the contralateral VA at the transverse foramen and stretching the extraspinal VA segment, decreasing blood flow [8,9]. This does not normally trigger infarction of the posterior circulation because the remaining contralateral VA and the anastomosis confer adequate circulation [10]. If the opposite VA is hypoplastic or rendered stenotic or occlusive by arteriosclerotic changes, the posterior circulation is vulnerable to infarction in most BHS cases [3]. In the case reported here, as the right VA was hypoplastic and flow almost absent, the posterior circulation was highly dependent on the left VA. We concluded that when the head was turned right the left VA became kinked just below the entry point of the C2 transverse foramen.

Matsuyama et al. [6] compared C1-C2 fusion with posterior VA decompression. Fusion reduced the range of head rotation but eliminated the risk of re-stenosis. VA decompression did not restrict head movement, but at a risk of re-stenosis. Lu et al. [5] suggested that posterior decompression should be used to treat VA occlusion at C3 and above, and anterior decompression to treat occlusion between C4 and C6. Zaidi et al. [4] considered that the anatomical course of the VA was the most important factor when choosing an approach. The VA moves anteriorly from C6 to C3 after passing the lateral curvature at C2, and then ascends sharply posteriorly. The VA at C1-C2 is best visualized via a posterior approach, and below C3 via an anterior approach. Decompression without fusion is recommended as first-line therapy; decompression is associated with a low restenosis rate and preservation of full-range neck motion. Seki et al. [11] successfully used anterior decompression to treat an BHS case with an occlusion at the C2 transverse foramen, removing the anterior portion of this foramen and the external one- third of the superior articular process to untether the VA. However, we chose an anterior approach because the stenotic lesion lay just below the C2 transverse foramen, not in the C1-2 joint, and favoured an anterior approach. If the BHS is not associated with C1-2 joint via detailed stenotic point evaluation, we can avoid posterior instrumentation that may cause severe limitation of neck motion. Upper cervical instability was of concern; we preserved the disc space and the articular joint. We obtained adequate VA exposure without violating the joint or disc space.

A patient with repeated dizziness and syncope was diagnosed with BHS and treated via selective anterior VA decompression at the precise point of stenosis, which was identified using three-position DSA. This case indicates that the BHS should be determined its exact stenotic point and surgical treatment should be individualized based on the stenotic point