Lung cancer is the leading cause of cancer death worldwide. Smoking is the main risk factor, but recent studies show an upsurge of professional and environmental factors in the genesis of this pathology. It is also the cancer most affected by occupational exposures, lungs are the front door many substances present in the workplace. This article presents all the pulmonary carcinogens as given by IARC (International Agency for Research on Cancer) classified as Carcinogenic agents with sufficient evidence in humans (group 1: carcinogen) and those known as agents with limited evidence in humans (group 2A: probably carcinogenic and group 2B: possibly carcinogenic). Although occupational lung cancer has no specificity for its clinical representation, there are some arguments of various kinds that can link this cancer to an occupational origin that will be examined throughout this article.

Although smoking is the main risk factor, recent studies show an upsurge in occupational and environmental factors in the genesis of this pathology [3,4]. In the workplace, lung cancer is the most common occupational cancer [1]. Respiratory tract cancers are particularly concerned by occupational exposures because inhalation is the route of entry for many substances present in the workplace. If s also the most affected by occupational exposures and some of them exist in the list of the occupational diseases tables as occupational cancer giving the right to have a compensation according compensable occupational diseases system [5]. The International Agency for Research on Cancer (IARC), a cancer research organization of the WHO, classifies carcinogens into four groups (from 1 to 4) with varying degrees of carcinogenicity to humans. The second group is subdivided into groups 2A and 2B [6]. These groups are; group 1: carcinogen, group 2A: probably carcinogenic, group 2B: possibly carcinogenic, group 3: unclassifiable as to carcinogenicity, group 4: probably not carcinogenic (Table 1) n° 1 presents all carcinogenic agents which are causally related with lung cancer according to the last classification by IARC [6].

This table does not include sectors not covered by IARC monographs; including genetic factors, reproductive status and some nutritional factors. It does not only contain professional agents but also non-professional ones (atmospheric, domestic, tobacco...etc). This table is divided in two lists; a and b:

a) "Carcinogens with sufficient evidence" means that a causal relationship has been established between the agent and the type of cancer studied (carcinogenic agent), and that chance or bias that may be involved in this relationship have been ruled out. These are certain carcinogens for humans (group1).

b) "Carcinogenic agents with limited evidence" means that a causal relationship has been established between the agent and the type of cancer studied (carcinogenic agent), but that chance or bias cannot be totally ruled out to explain this relationship. These are probable or possible carcinogens for humans (group 2A and 2B). This list also includes some elements belonging to group 1, like benzene, but which are carcinogenic for other organs whereas the scientific evidence on their carcinogenic capacity for the lungs remains limited.

These carcinogens may be both well-identified substances than activities in which it has not been possible to identify a single substance. The most important occupational risk factors for lung cancer are asbestos, diesel, and some metals: chromium, nickel, beryllium, cadmium, arsenic and silicon (in the form of crystalline silica) [7]. For asbestos, for example, which is the main occupational etiologic factor for lung cancer, occupational exposure sources are in its mining and usage in industry or manufacture especially thermal and electrical insulation in construction and shipyard work, brakes, textile industry, asbestos cement products and watertightness [8]. These diverse uses are explained by its qualities: asbestos has a high thermal, chemical and mechanical resistance. Asbestos is responsible for more than half of occupational lung cancer [9] and a dose-response relationship is clearly demonstrated between lung cancer mortality attributable to asbestos in populations exposed to continuous occupational exposures, and the cumulative exposure which takes a linear progression model [10]. 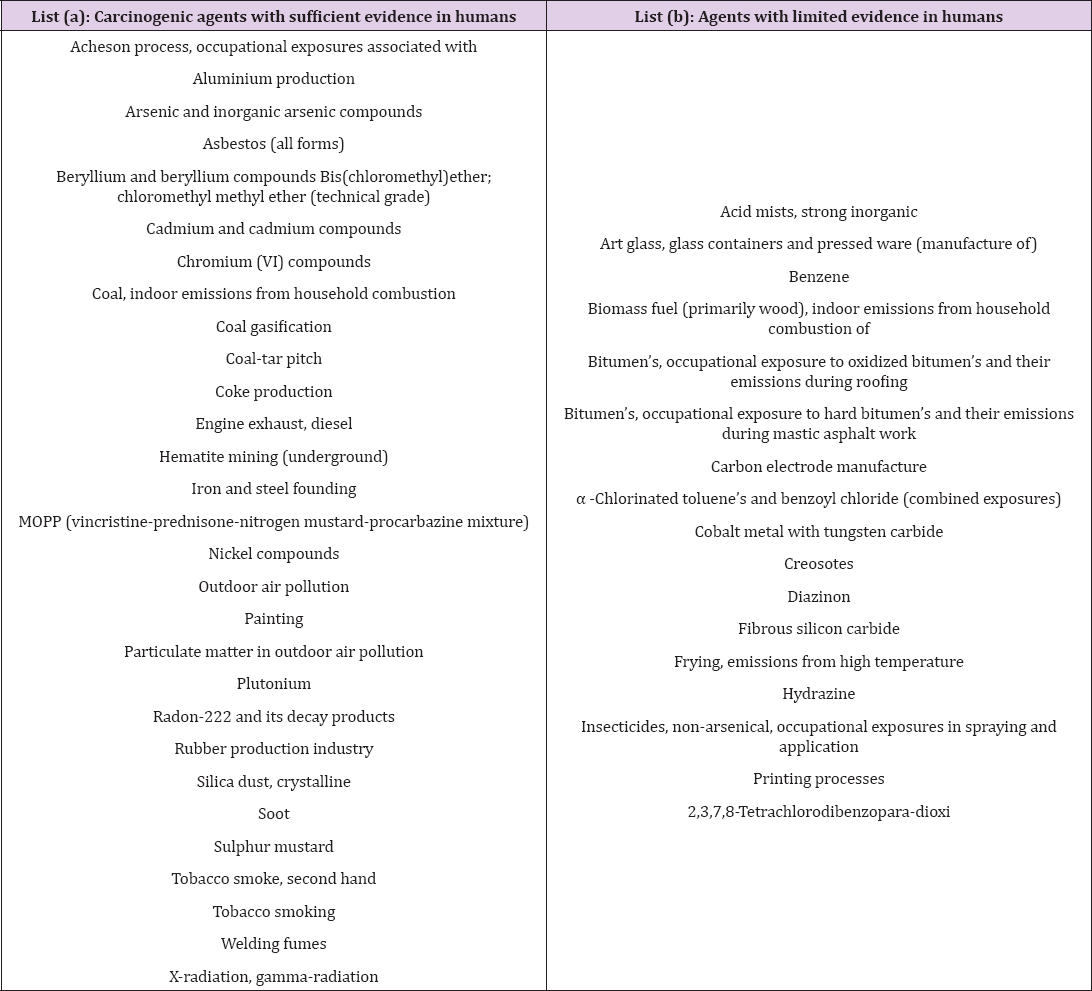 In the workplace, carcinogens are mixed with each other in the different materials and processes used in the activity in question, which poses the problem of polyexposure and coexposure. This makes it difficult sometimes to know the real part of each agent in the appearance of cancer. The typical example is construction work, where several pulmonary carcinogens are brought together at the same time [11]. The construction worker is exposed to asbestos during the demolition or renovation of old buildings (among others), crystalline silica during sanding and the use of disc molding machine or jackhammer and polycyclic aromatic hydrocarbons (PAHs) contained in the tars during watertightness work (in addition to asbestos) which are all certain carcinogens for the lung (group1). Finally, he's also exposed to solar radiation during external work (carcinogenic for the skin), lead contained in some flashings (carcinogenic to the stomach) and titanium dioxide present as pigment in some sealants [11].

For attributable risk fractions, percentages were reported between 16.5% (for IARC Group 1 carcinogens) and 21.6% (for certain and probable carcinogens: IARC Group 1 and 2A) among men in the United Kingdom [12], a little more than in France: 12% [13]. In industrialized countries, it was between 13 and 30% [14]. However, these fractions remain very variable in time and space, in this context; a study reports attributable risk fractions ranging from 0 to 40% about 32 international studies over the last 30 years [15]. Clinically, there is no specificity for lung cancer manifestations; however, there are some arguments that support the relationship between this neoplasm and occupational exposure [16]. First, literature data that characterize the certain or probable carcinogenicity of some agents or work processes are very important to consider. The IARC evaluations, which are regularly updated, are very valuable in this regard [17].

Other arguments may also be considered such as the duration of exposure to the occupational carcinogen, the parameters that characterize this exposure, the presence of benign pathologies or associated biological signs attributable to the suspected causal agent, and non-occupational risk factors. The latency of occupational lung cancer is quite long; it is 10 to 30 years [18]. So, a lung cancer with less than 10 years of exposure to the suspected carcinogen would be difficult to attribute to an occupational origin. The intensity of exposure, its cumulative duration, and possible co-exposure to other carcinogens should be clarified as the credibility of a causal relationship increases with cumulative exposure. These data can only be obtained through a detailed occupational history interview, possibly supplemented by the use of a job-exposure matrix and/or metrological data.

In the specific case of asbestos, the mineralogical analysis of a biological sample provides the physician with an objective estimator of cumulative exposure. It is sometimes the only reliable estimator, especially if there is an unclear description of previous jobs, the patient does not know about the presence of asbestos in some jobs or forgets the oldest exposure periods. Values greater than 1 asbestos body (AB) per milliliter of bronchoalveolar lavage fluid (1 AB/ml) or greater than 1000 AB per gram of dry lung tissue (1 AB/g) indicate a high probability of significant exposure to asbestos. Above 5 AB/ml bronchoalveolar lavage fluid (BAL) or 5000 AB/g lung tissue, occupational exposure is almost certain [19]. Also, for some carcinogens, there are sometimes elements of indirect ethological orientation: pleural and/or parenchymal fibrosis for asbestos, radiological or anatomopathological silicosis for crystalline silica, a history of acute or chronic berylliosis for beryllium, nasal ulcerations for chromium, palmo-plantar dyskeratosis for arsenic, renal biological damage to cadmium, etc.

These elements do not prove the causal relationship, but are additional signs, that generally confirm excessive levels of exposure to the carcinogen considered. On the other hand, their absence does not make it possible to reject a causal association. At the anatomopathological level, there is usually no histological specificity for occupational lung cancer, although some histological types are more common for some agents. Some authors have reported an increased representation of adenocarcinomas in patients exposed to asbestos, whether or not there is parenchymal fibrosis [20-22]. However, an excess of other histological types has also been observed [23] and currently most authors consider that the histological type cannot be used to argue a relationship with asbestos exposure [20]. Arsenic, nickel and chromium do not induce histological specificity [24]. On the other hand, exposure to bis-(chloromethyl) ether is related to a high incidence of small cell lung cancer: up to 60% in most series, occurring in young and frequently non-smoking patients. Also, radon exposure increases the incidence of small cell lung carcinoma in smokers and nonsmokers [25].

The existence of non-occupational risk factors, smoking in particular, does not allow the exclusion of the occupational origin of a lung cancer, as has been clearly demonstrated with regard to asbestos [26]. Indeed, asbestos-tobacco interaction appears to follow an approximately multiplicative model, indicating that each of these two etiological factors exert an independent action in the carcinogenesis process [26,27]. On the other hand, the absence of non-occupational risk factors considerably reinforces the hypothesis of a direct and essential causal relationship. The hypothesis of a molecular specificity of carcinogenic agents on specific genes is currently the subject of much research. some studies have studied the role of some agents (ionizing radiations, chromium, asbestos) in the occurrence of genetic alterations (bearing in particular on the P53 and Ras genes) [28,29].

However, no specific mutation to an occupational carcinogen is clearly identified, although it has recently been suggested that a mutation in the Ras gene could be associated with the carcinogenic process induced by the asbestos [28]. Lung cancer is the most common occupational cancer. The numerous etiologies and occupational exposure situations to proven carcinogens for the lung justify a particular vigilance of all health actors. The role of the occupational physician particularly involved in the organization of prevention against potential exposure situations is paramount in this approach.