Biological Activity of Coumarin Derivates and their Lanthanoid Complexes

Coumarin (2H-1-benzopyran-2-one) and its derivates are large class of chemical compounds, most of them naturally occurring and can be found in plants [1], fungi and bacteria [2,3] or can be synthesized with a modification of the coumarin ring [4-6]. Due to the different types of substitution of the parent ring, coumarins are extremely variable in structure resulting in variety of their properties. Both natural and synthetic coumarins are reported to have properties such as antioxidant [7,8], antifungal [9,10], antitumor [11-13], anti-HIV [14,15], anticoagulant [16,17], antibacterial [18-20], etc. A suggestion has been made that the antibacterial activity depends on the position of substituents and the 3,3'-(4-hydroxybenzylidene)-bis-4-hydroxycoumarin skeleton is essential for the activity [18]. Besides the coumarins, their complexes with different metal ions have been found to possess antimicrobial activity i.e. the implementing of a metal ion in the structure of the coumarin can lead to enhancing its biological activity [21-23]. Complexes of lanthanoids with various coumarin compounds have been synthesized and screened for their biological activity [24-29].

In the microbiology several methods can be used for testing bacterial susceptibility according to the conditions. The selection of a method is based on many factors among them automation, cost, reproducibility, accuracy and individual preference. Bacterial susceptibility can be checked using disk diffusion method, broth macrodilution, broth microdilution or agar dilution method [20,3033]. Disk diffusion refers to the diffusion of an antimicrobial agent of a specified concentration from disks, tablets or strips, into the solid culture medium that has been seeded with the selected inoculum isolated in a pure culture. It is based on the determination of an inhibition zone proportional to the bacterial susceptibility to the antimicrobial present in the disk. The results depend on the concentration of the tested compound and its diffusibility. Disk diffusion is straightforward to perform, reproducible, and does not require expensive equipment. Agar dilution involves the incorporation of varying concentrations of antimicrobial agent into an agar medium, usually using serial twofold dilutions, followed by the application of a defined bacterial inoculum to the agar surface of the plate. It determines the lowest concentration of the assayed antimicrobial that inhibits the visible growth of the bacterium being tested, MIC, minimal inhibitory concentration, usually expressed in μg/ml or mg/L. These results are often considered as the most reliable for the determination of MIC for the test bacterium/ antimicrobial combination [33].

The MTT assay has been used to determine the metabolic activity of cell lines in the presence of different substances [27-29]. This is a colorimetric assay based on the cleavage of the tetrazolium ring of MTT (3-(4,5-dimethylthiasol-2-yl)-2,5-diphenyl tetrazolium bromide) by dehydrogenases in active mitochondria of living cells as an estimate of viable cell number [34]. The MTT data usually are presented as percentage of the untreated control (set as 100%) and fitted to sigmoidal concentration-response curves. Thus, the corresponding IC50 values could be calculated using non-linear regression analysis (GraphPadPrizm program).

The Contribution of the Work Presented

In the work presented four derivates of 4-hydroxycoumarin were used, all synthesized via Knoevenagel condensation [32], namely 3,3'-[phenylmethylene]bis-(4-hydroxy-2H-1-benzopyran- 2-one), L1; 3,3'-[(2-methoxyphenyl)methylene]bis-(4-hydroxy-2H- 1-benzopyran-2-one), L2; 3,3'-[(4-methoxyphenyl)methylene]bis- (4-hydroxy-2H-1-benzopyran-2-one), L3; and 3,3'-[(4-chlorphenyl) methylene] bis-(4-hydroxy-2H-1-benzopyran-2-one), L15. The complexes prepared with lanthanoids Ln (III), denoted as NdL1, NdL2, NdL3 and LnL15 (Ln = Nd, Pr, Ho, Eu, Tb, Er, Yb) were characterized (characterization not included) and biologically screened. Both the ligands and complexes were tested for antibacterial activity against Gram-positive microorganisms, B. Mycoides, B. Subtilis and S. Lutea and Gram-negative bacteria E. Coli. The cytotoxicity against 3 cell lines was tested both for the ligand L15 and for the complexes LnL15 (Ln = Pr, Eu, Ho, Er, Yb). Our aim was to evaluate the influence of the implementing the lanthanoid ion in the ligand structure on the bioactivity. The statistical data analysis was applied for better understanding of the results.

Determination of the Cytotoxicity

Determination of the Antibacterial Activity

The double-layer agar hole diffusion method was applied. A nutrient agar (NA, containing 0.1 % w/v meat extract, 1% w/v peptone, 0.5% w/v NaCl, 1.5% w/v agar) medium was used. The compounds (ligands, complexes, and corresponding salts) were dissolved in DMSO to obtain concentration from 1 mg/mL to 0.5μg/mL. A preculture of the corresponding bacteria was grown in NA overnight at 23°C (Gram (+)) and 37°C (Gram (-) bacteria). A suspension of each bacteria in sterile water was prepared. The turbidity of the inoculum (A. = 640nm, b = 1cm, against H2O) was adjusted with McFarland 4 (0.4mL 1% BaCl2.2H2O and 9.6mL 1% H2SO4) standard. The suspension was dissolved in NA (1.5% solution). The sterile agar (10mL) and the inoculated medium (10mL) were consecutively placed in Petri dishes. Each solution (20μL) was added into the holes (d = 6mm) made after solidification of the agar. The diameter of inhibition zones was measured 24h after the inoculation at 23°C for Gram (+) and at 37°C for Gram (-) strains. All the results were collected by three separate experiments. All the equipment and culture media were sterile. Because no activity was registered against the Gram-negative bacteria, data about E. Coli are not commented in the work presented.

Cytotoxicity of the Ligand L15 and Some of the Lanthanoid Complexes

The cytotoxicity tests performed showed that all the LnL15 (Ln = Pr, Eu, Ho, Er, Yb) complexes have antiproliferative activity against the K-562, BV-173 and SKW-3 cell lines. The effectiveness of the compounds for inhibiting the cells to function is expressed as the half maximal inhibitory concentration (IC50, μM) and data are summarized further down in Table 1. It was observed that the BV-173 cell line is the most influenced by the complexes presented among the cell lines investigated; the behavior of the K-562 line is similar, while the SKW-3 cell line is the most resistant. The highest activity among all the complexes is shown by HoL15 against K-562, with an inhibition concentration, IC50, of 2.9(2.8-3.1) μM. The complexes HoL15 and YbL15 show a similar high activity against BV-173, respectively IC50 6.4(5.5-7.5) and 6.2(5.0-7.6) μM. The complexes YbL15 and PrL15 show the lowest inhibitory effect against SKW-3. The activity of the complexes is different against the three examined cell lines, but no clear correlation is apparent between the activity and the properties of the lanthanoid (such as atomic number, for example). The ligand L15 shows a decreasing activity for deactivation of the cell lines SKW-3, BV-173, and K-562, with IC50 values of 21(20-23), 30(26-38) and 72(57-89) μM, respectively. Comparing the ligand with its complexes, it is obvious that the complexes are more active against the tested cell lines. The only exception is the lower activity of the complexes PrL15 and YL15 against SKW-3 in comparison to the higher activity of the ligand. The nature of the interaction of the compounds and their decomposition products with the cells, and their mode-of-action must be determined in order to obtain a complete pharmacological characterization of the novel compounds. Investigations should demonstrate the eventual viability of the compounds as pharmacological agents.

Table 1: Effectiveness of the compounds for inhibition of the functioning of the cells, expressed as half maximal inhibitory concentration (IC50).

Three types of bacteria were tested for assessing the toxicity of four ligands (L1, L2, L3, L15) and six lanthanoid complexes (NdL1, NdL2, NdL3, NdL15, TbL15, EuL15). The results are presented further down in the Table 2. All the tested compounds showed activity against Gram (+) bacterial strains: B. Mycoides, B. Subtilis and S. Lutea. The size of the zones of inhibition was different for each compound towards each bacterial strain.

Table 2: Activity of complexes and ligands against B. Mycoides, B. Subtilis and S. Lutea. 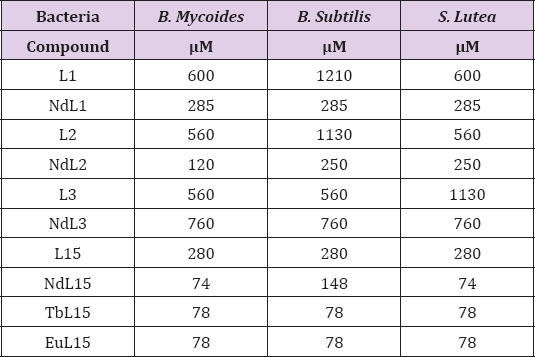 The goal of the statistical analysis is to reveal hidden relationships between the objects (chemical compounds) or between the features which characterize them (toxicity parameters or bacteria type).

To find groups of similarity between the objects hierarchical cluster analysis was applied (z-transform of the input data, squared Euclidean distance as similarity measure, Ward's method of linkage and Sneath's criterion for cluster significance). As seen from the raw data matrix the toxicity of the ligands towards all types of tested bacteria is significantly lower than that of the complex compounds. It was important to find if some patterns of specificity could be detected in the data set (keeping in mind its small dimension). In (Figure 1) the hierarchical dendrogram of clustering the chemical compounds is shown. Three major clusters are formed (significance level 1/3Dmax): K1: (L1, L2, L3, NdL3); K2: (NdL1, NdL2); K3: (L15, TbL15, NdL15, EuL15). The first cluster K1 is specified by the lowest toxicity level towards all three bacterial types (average values for each bacterium for the members in this cluster 620, 915, 762.5, respectively). The second cluster K2 indicates intermediate toxicity level (average values 202.5, 267.5, 267.5, respectively) and K3 is the pattern with the highest toxicity level (averages of 127.5, 146, 127.5, respectively). A deeper understanding of the relationship between the structure and the activity of the compounds can contribute to the elucidating of the possible reason for the toxicity. It can contribute to the design of optimal agents, as well.

Figure 1: Dendrogram of clustering of the chemical compounds based on their antibacrterial activity. 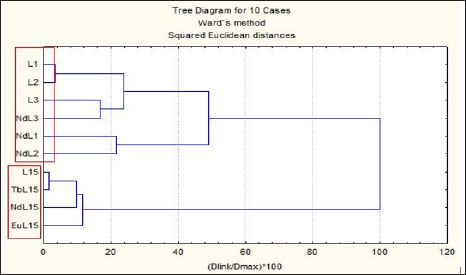 To check the relationship between the bacterial types, correlation analysis of the input data was performed. The simple correlation matrix is shown in Table 3. It could be concluded that B. Mycoides reacts in a similar way as B. Subtilis and S. Lutea to the compounds toxicity but there is a difference in the response between B. Subtilis and S. Lutea. A possible reason could be the different morphology of the bacteria i.e. B. Subtilis are rod-shaped but S. Lutea are coccus (spherical) bacteria. 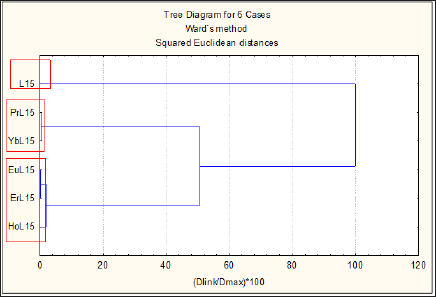 In this case the cytotoxicity of the ligand L15 and its complex compounds with Pr, Eu, Ho, Er and Yb was studied. The same statistical approach was applied to the input data set. The hierarchical dendrogram of clustering of the chemical compounds based on their cytotoxicity is shown on (Figure 2). Two distinctive groups are formed and one outlier i.e. L15 - outlier; K1: (PrL15, YbL15); K2: (EuL15, ErL15, HoL15). Ligand L15 indicates relatively lowest inhibition of the cell growth (highest IC50 values for two of the cell lines but it is not the case for cell line SKW-3, where the lowest inhibition is shown by the complex compounds PrL15 and YbL15). The two objects PrL15 and YbL15 reveal their specificity by forming a separate pattern K1 marked as lowest inhibition for cell line SKW-3. The rest of the complex compounds are clustered in K2 since they represent the specificity pattern of highest inhibition power. The correlation analysis has shown that lines BV-173 and K-562 are very similar (r = 98) towards all compounds including the free ligand but both lines differ substantially from line SKW-3 (correlation coefficients -0.24 and -0.09, respectively).