We performed the study of secondary metabolites from endophytic fungus Aspergillustereus. The fungus was isolated from the ascidian Didemnummolle which grow in the Malalayang waters, North Sulawesi. Chemical investigation of extracts from Biomaltagar found compounds from lactone groups namely Terrein and Butyrolacton VII. The structure of the above compounds was characterized based on spectroscopic data including NMR, UV, IR and MS. Terein and Butyolacton VII showed a narrow spectrum antibacterial activity against Gram positive bacteria Bacillus megaterium DSM32T. So far there was no reports about the antibacterial activity of Butyolacton VII.

The problem in controlling microorganism is increased spread of drug- resistant microorganisms. The resistance can be due to routinely use of certain antibiotics. The discovery of newly antibiotic is the essential step in order to keep the sustainability of effective antimicrobial medicine. Secondary metabolites proved to be interesting for drug development. In their natural habitat, these compounds are important for the marine organism itself. They play a crucial ecological role, shielding against potential invaders, predators, other competitors or prevent diseases caused by microorganisms. Accumulation of toxic secondary metabolites is the best strategy to fight against potential predators. These compounds show pronounced pharmacological activities and are interesting candidates for new drugs primarily in the area of cancer treatment and antibiotics.

Several natural products from the marine organisms show striking structural similarities to known metabolites of microbial origin, suggesting that microorganisms are at least involved in their biosynthesis or are in fact the true sources of these respective metabolites or host-symbiont modification Proksch et al. [1]. For example, arenastatin compound derived from Dysidea sponge share similarity structure to chryptophycin-1 which is a cyanobacterial metabolite Kobayashi et al. [2,3]. Recently, several new bioactive products were isolated and identified with unique core structures and potent biological activities Bara et al. [4-9]. As a part of our ongoing search for new bioactive secondary metabolites from terrestrial to marine endosymbiotic fungi, we investigated Aspergillus terreus that isolated from ascidians Didemnum molle growing in Bunaken National Park, Manado, Indonesia. The present study represents the first investigation of natural products produced by Aspergillus terreus isolated from marine ascidians D. molle.

The Ascidians Didemnum molle (Figure 1) was collected from Pangalisan Water at Bunaken National Park Manado, Indonesia (1°35’58.11”N; 124°46'59.56"E) (Figure 2). The symbiotic fungus was isolated from inner tissue of related organism following the procedure describes below. A section of a part of D, molle was immersed in 70% of ethanol for 30 seconds and sliced under sterile condition. The section then was positioned on the surface of malt agar in a petridish. Chloramphenicol 200mg/L was added to the medium to avoid bacterial contamination. Negative control was applied to cross check the growth of epibiont fungi from external parts of the slices. The fungus started to grow from the section after 3- 14 days of incubation at room temperature (Figure 3). 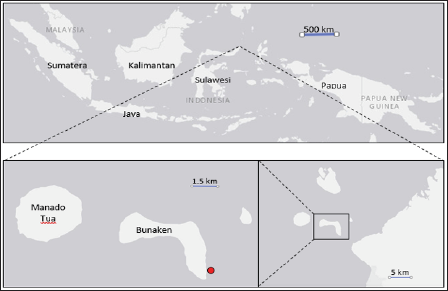 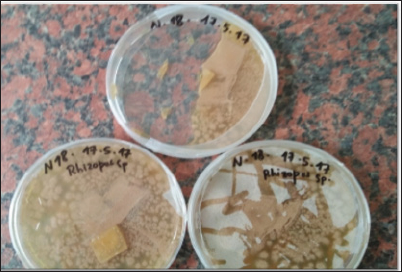 A piece of fungal mycelium (0.5cm2) slashed from the agar dish and lyophilized in an Eppendorf (2mL) followed by storing in thermafrostfrezzer (-80°C) and freezedryer for 2 hours and overnight respectively. Total DNA extracted with the Mo Bio Ultraclean DNA extraction kit (Qiagen, Hilden, Germany) from the samples. Briefly, 0.5ml of sodium pyrophosphate solution was added to the sample and tungsten carbide beads (Qiagen, Hilden, Germany) were added to the microtubes and cells were lysed by beating for 60s in a cell disrupter (Hybaid Ribolyser, Hybaid, Middlesex, United Kingdom). DNA was purified according to the protocol provided by manufacturer (Qiagen, Hilden, Germany).

DNA amplification by PCR was then performed using Hot Star Taq Master Mix Taq polymerase (Qiagen) and the primer pair ITS1(F) and ITS4(R) ordered from Invitrogen White [10] in an iCycler thermocycler. In general, thermal condition followed by 15 mins at 95°C, followed by 30 cycles of 95°C for 1min, 30s at the annealing temperature (56°C) and 72°C for 1min followed with final extension (72°C; 10min). The specificity of amplicons was confirmed by running the samples on 1.2% agarose gel. The length of the amplicon was confirmed by reported articles and followed by purification of particular band. DNA sequencing is performed in order to identify the fungus strain based on its genomic content. The purified amplicon was submitted for sequencing to pt. Genetika, Jakarta, followed by BLAST search against EMBL database.

For antibacterial assays, all isolated compounds were tested their antibiotic property towards Bacillus megaterium DSM 32Tand Escherichia coli DSM 498. Both isolates were originally from Deutsche Sammlung von Mikroorganismen und Zellkulturen (DSMZ), Braunschweig, Germany. The strains were refresh grown in 10 ml slope nutrient agar in tube at 37°C temperature for overnight. The cultures were harvested and measured their density. The initial 0D600 was set to 1 to reach concentration of 8x108 cells/ml. The cultures were diluted until 8x106 cells/ml prior used, 1 ml of the bacterial culture was subjected and seeded into the Luria Betani Agar (LB Agar) and after solidification, 20pl of the ethanolic extracts of each sample were spotted onto the plates. Chloramphenicol (1mg/ml) and 96% ethanol served as positive and negative controls, respectively. Plates were incubated at 37°C for 18h and checked for inhibition zones.

The fungus(strain designation N.18 Rhi) is kept in the authors' laboratory (G.K.). (Figure 3) Furthermore, fungal culture was identified according to a molecular biological protocol by DNA amplification and sequencing of the ITS region as described previously. BLAST search revealed 98 % similarity to Aspergillus terreus (MG669192.1). The sequence data has been submitted to GenBank with accession number MH910675. The related fungus was static cultivated in large scale following method described previously (Figure 4). Mycelia in rice and malt agar cultures of A. terreus were homogenized using an automatic shaker blender and exhaustively extracted with Et0Ac. The crude extract of A. terreus was subjected to liquid-liquid fractionation using n-hexane: methanol and water to obtain n-hexane, methanol and water fractions. The methanol fractions were further injected into column chromatography using RP Grace instrumenttm chromatography system and continued by injected into HPLC to obtain compounds Terrein (1) and Butyrolacton VII (2) and furthermore the two nonsaturated fatty acids e.g. C-14 Tetradec-4-enoic acid (3) and C-18 Octadec-4-enoic acid (4) (Figure 5) were purified from n-hexane fraction subjected to NP Grace instrumenttm flash chromatography 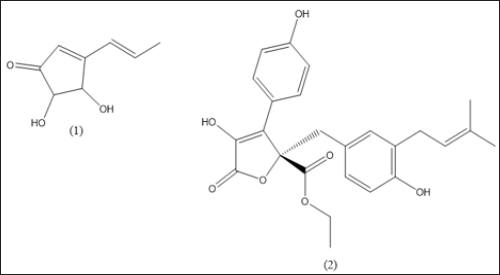 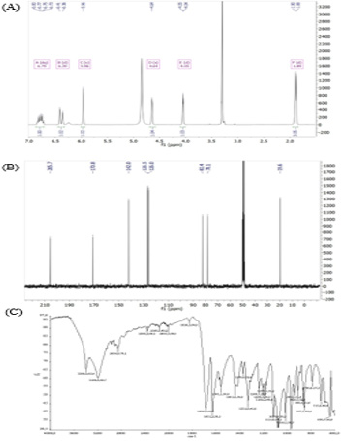 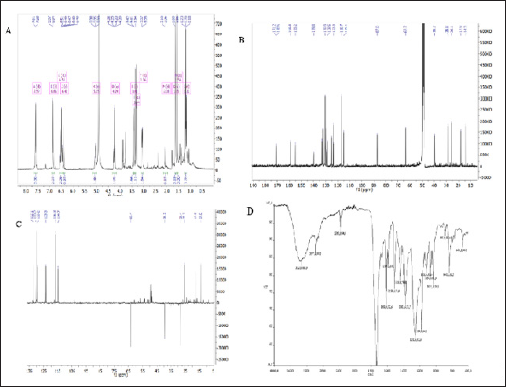 Especially, marine based fungi are considered as a drug source in the marine environment and being reported as a good source of antimicrobial lactones, anthracenes and peptides. The antibacterial test of isolated compounds shows compound (1; terein) and (2; butyolacton VII) have a narrow spectrum antibacterial activity against Gram positive bacteria Bacillus megaterium DSM32T Terrein has been known as antibacterial and antifungal activities [18,19]. However, although Butyolacton VII has been isolated as an Aspergillus natural product [12,20], so far there were no reports about the antibacterial activity of the compound, hence we reported its narrow antibacterial activity against Gram positive B. megaterium. No activity array is recorded from isolated compounds against Gram negative E. coli. So far Gram-negative infection control is often become a major problem in modern medicine, this is due to the characteristics of the particular group e.g. their peptidoglycan layer which is dense and compact thereby inhibits internalization process for antibiotics to be able to affect the cellular mechanisms within bacteria. In addition, it has "efflux-pump mechanism", a compound removal mechanism that are not needed in their cellular biotransformation processes through their secretion system [21,22].

c. For the first time we reported the antibacterial properties of butyrolacton VII in this paper