Huntington's disease (HD) and Dentatorubral-pallidoluysian atrophy (DRPLA) are progressive and currently incurable neurodegenerative diseases which shares common features such as choreic involuntary movements, dementia, psychosis, and pathologic expansion of triplet nucleotide repeats in the causative genes [1,2]. In HD, the prevalence of dysphagia is approximately 30 % and several reports have been examined the features [3-5]. In DRPLA, dysphagia can be clinically challenging considering a report that approximately 50 % of the DRPLA patients decease by aspiration pneumonia [6]. However, the data is scarce about the natural course of dysphagia in both HD and DRPLA in long term. Thereby, we examined the progression to clarify the features and to seek clues for potential treatments.

We performed a retrospective chart-review of patients with HD (N=7) and DRPLA (N=5) whose swallowing function was examined at least once in our institution. The diagnosis of HD was made by simultaneous presence of following three features;

b) Atrophy of caudate in brain imaging, and

c) Pathologic expansion of CAG repeats in HTT in their own or their families;

if gene testing not done, presence of both (a) and (b) in their family members. DRPLA was diagnosed by;

b) atrophy of brainstem and/or cerebellum, with or without leukoencephalopathy in brain imaging, and

c) mutation of ATN1 or family history, in the same way as HD above.

The chart-review was concluded if the patients deceased, transferred to other institutions, or received percutaneous endoscopic gastrostomy (PEG). The onset of disease was defined as the initiation of movement abnormality, excluding the start of congnitive-psychiatric symptoms or epilepsy. The level of nutritional modification was reviewed to express the severity of dysphagia in the following five stages (the mildest: I, the severest: V); (I) unmodified, (II) partially modified (e.g. particular foods were minced), (III) pasted, (IV) high-caloric jelly, and (V) enteral feeding via PEG. The activity in daily lives (ADL), when they became wheelchair-bound and/or bedridden, was reviewed to express the systemic motor function. The result of video fluorography (VF), using liquid barium, was also reviewed. Owing to the small sample size, the continuous variables were expressed in median (range). 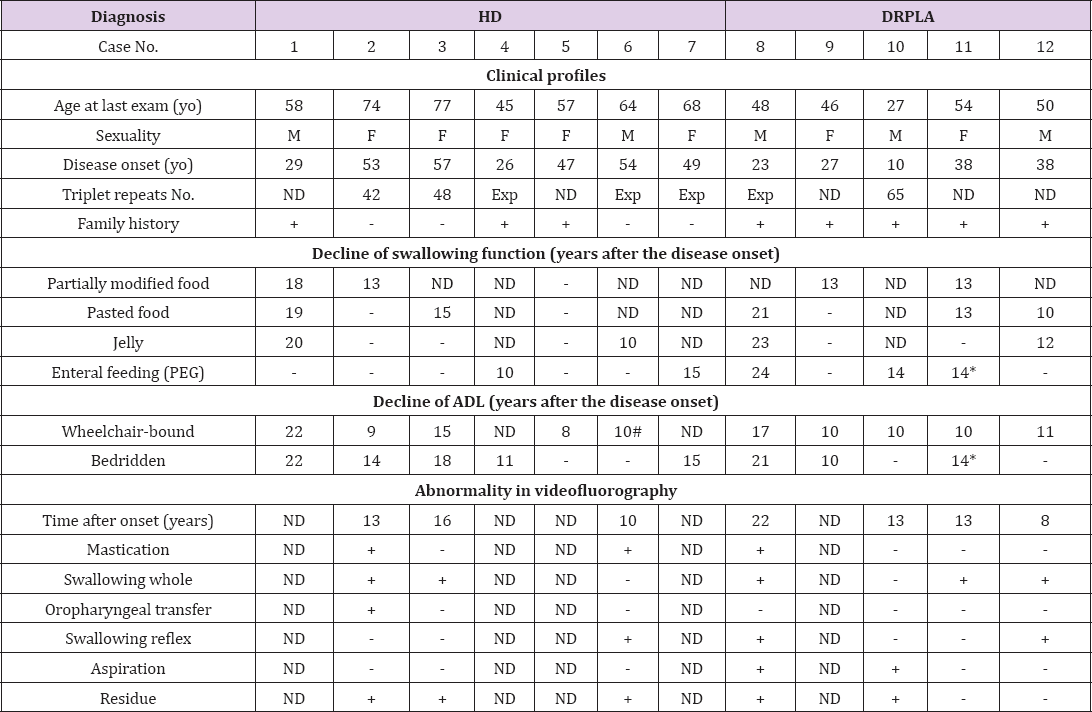 Figure 1: Progression of dysphagia in HD and DRPLA. 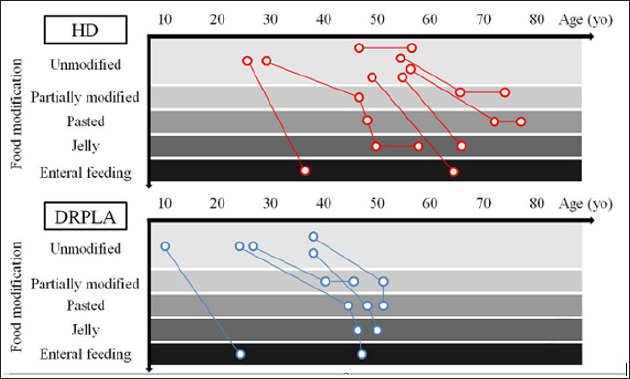 Plotting of longitudinal decline in swallowing function (Figure 1) suggested that younger disease onset and having DRPLA are potential risk factors of poorer functional prognosis, although the small sample size and absence of young-onset HD and elderly-onset DRPLA were undesirable for statistical analysis. The decline in ADL due to disease progression, with exception of case 6 who became wheelchair-bound by spinal compressive fracture (annotated by # in Table 1), seemed accompanying to the dysphagic progression with the lag within ±4 years. VF was evaluatable in 3 HD patients and 4 DRPLA patients, showing that insufficient mastication, impaired oropharyngeal transfer, delay in swallowing reflex, and aspiration in a certain number of patients. Swallowing whole foods (positivity: 66 % in HD and 75 % in DRPLA), and pharyngeal residue (positivity: 100 % in HD and 50 % in DRPLA) had relatively high prevalence in both groups. Notably, only case 10 experienced positional change from sitting position to reclining position in VF (Figure 2). The result was disappearance of aspiration (penetration of balium into the trachea: arrowhead) and pharyngeal residue (residue of balium in the pyriform sinus: arrow), as the fixation of his head and neck against choreic movement was ameliorated.

We reported the longitudinal progression of dysphagia in HD and DRPLA with ≥10 years observation. Owing to the retrospective study design, the workups (e.g. gene testing and VF) were not thorough, furthermore the sample size, absence of age-matching in HD and DRPLA, and lack of healthy control were negative factors for precise statistical analysis. However, we found several suggestions from the data. In the early phase, dysphagia ofHD and DRPLA was not prominent, considering amyotrophic lateral sclerosis often impose the patients to receive enteral feeding in 2-3 years [7]. However, when the duration of HD and DRPLA was ≥10 years, dysphagia was no more ignorable considering that approximately 30 % in HD and 40% in DRPLA of our patients received PEG. It seemed plausible that being young-onset and having DRPLA were potential risk factors of rapid progression in dysphagia, since younger onset are reported to be associated with severer phenotype in both HD and DRPLA (often by longer triplet expansion), and epilepsy and mental retardation in DRPLA can negatively influence the swallowing as well as the motor abnormality [1,2,6]. The seemingly positive correlation of swallowing function and ADL was consistent with the previous report of HD, while we could not find adequate reports of DRPLA [3].

It was also suggested that particular patients with unstable head and neck due to involuntary movements, as our case 10, can be benefited by reclining position. However, the significance of positional adjustment in HD and DRPLA is not established [4]. Rather, considering HD with rigid-bradykinetic phenotype can need verticality for smooth transfer of foods utilizing gravity, reclining position can interfere food transfer in these phenotypes [8]. In conclusion, approximately 30-40 % of patients with HD and DRPLA had to receive enteral feeding by the disease progression in >10 years from the onset of motor symptoms. The progression of dysphagia could be correlated to systemic motor function. Young onset and DRPLA could be risk factors of rapid decline in the swallowing function. However, further investigations are required owing to the limitations such as small sample size, lack of age- matching in HD and DRPLA group, absence of controls, incomplete data of triplet repeat number, possible influence of haloperidol, and disunity of workup including VF.

The authors have no financial disclosure to report. This research did not receive any specific grant from funding agencies.