Glioblastoma and Glioblastoma with Oligodendroglial Component: a Histological and Prognostic Overview Runing Head: pathology and GBM and GBMO Volume 9- Issue 4

Glioblastoma (GBM- GIV astrocytoma) represents the most noted neoplasms of the brain usually reported with dismal prognosis. The term glioblastoma with oligodendroglial component (GBMO) represents the present of oligodendroglial foci in glioblastoma tumors. GBMOs are usually represented with better therapeutic response and concomitant prognostic outcome. We have observed nearly 610 cases of various pathologic grades of astrocytoma from 2009 to 2014 and found the oligodendroglial component among the 40 cases. Nearly in all the cases of GBM and GBMOs received complete resection and was followed by standard therapeutic regime of radiotherapy and chemotherapy with temozolomide. The survival pattern was observed in patients diagnosed with GBM and GBMO. We have looked for the presence of MIB1, p53 and necrosis pattern in selected GBMO sub group. We observe nearly 54% of GBMOs stained positive with p53. Necrosis and MIB1 was observed in most of the GBMO cases. These was statistically significant difference among survival of glioblastoma patients' and GBMOs. Glioblastoma multiformae patients with oligodendroglial component was observed to have median survival of 16 months while with GBM it was observed to be 12 months. GBMO were found to have significantly longer survival than glioblastoma patients' and respond well to chemo and radiotherapy.

Glioblastoma are recognized as most aggressive and widespread malignancies of the brain. Irrespective of the multimodal treatment regime, prognosis still remains dismal. However, the clinical course appears to be heterogeneous ranging from 3 to 18 months [1,2]. The discrepancy in the prognosis is mainly attributed to few factors as age and presence of oligodendroglial component [2]. Necrosis and older age is often correlated with shorter survival in clinical cases [1]. Glioblastoma with oligodendroglial component (GBMO) are high grade astrocytic neoplasms with discrete oligodendroglial differentiation areas displaying necrosis [1]. Few studies have claimed that glioblastoma with oligodendroglial component display better prognostic pattern, yet this hypothesis remains controversial [3-8]. GBMOs have been reported to have distinct genetic alterations and clinical behavior and displays distinct IDH1 mutations along with 1p/19q co deletion [9,10]. In present study, we have observed the molecular signatures of p53 and MIB1 in GBMO patients. Further, we have also seen for the presence of necrosis pattern and prognostically evaluated the GBMO cases and compared it with survival of GBM patients.

The data of diagnosed clinical cases was collected from Krishna Institute of Medical Sciences, Secunderabad, India from 20092014. Upon initial MRI diagnosis, the patients were followed for surgical resection. The resected tissues were followed for the histopathological diagnosis based on the criterion World Health Organization (WHO) as cellular proliferation, mitotic index, polymorphic nuclei and the presence of necrosis. 610 cases were found to be diagnosed with astrocytoma, out of which 40 were found with glioblastoma with oligodendroglial component. The selected patients were not having previous history of low grade tumors and were followed up closely to obtain the survival data. All the patients were under went at near total or subtotal resection and confirmed by MRI imaging.

Out of total 610 cases, the glioblastoma with oligodendroglial component was confined to 40 cases (6.5%). The paraffin embedded tissue sections of the resected tissues were observed for the presence of oligodendroglial tumor cells with characteristic pattern of round nuclei, honeycomb appearance and cytoplasmic swelling. The morphological appearance was confirmed by the two independent pathologists.

The overall survival pattern of patients diagnosed with glioblastoma and oligodendroglial component were studied by Kaplan-Meier statistics. The comparison between the survival of GBM and GBMO patients was performed with log-rank test, p<0.05 was considered as statistically significant.

The details of the GBMO patients are given in Table 1. There were 40 cases we studied in a sub-group. Glioblastoma with oligodendroglial component constituted 21% of total glioblastoma cases and 6.5% of total astrocytoma cases. Age of patients was found to be in range of 16-63 years (male= 26, females=14). The tumor location was found to be dominated by frontal and temporal lobes. Oftotal GBMO cases, tumor was found to be located in 13 cases at frontal lobe, in 16 cases at temporal lobe, in 6 cases at parietal lobe and in 5 cases at occipital lobe. Similar therapeutic regime of surgical resection followed by radiation therapy and chemotherapy with temozolomide was followed. The GBMO patients were closely followed up for the survival and tumor recurrence and was confirmed by the MRI imaging. Further, the p53, MIB1 and necrosis pattern was also observed (Figure 1). Out of 40 cases, 38 were found to be positive with MIB1 staining. In one case, the details were not available and one case was found negative. In 22 cases, the p53 protein was stained positive while in 8 cases negative staining was observed. The details were not available with 10 cases. Necrosis was found to be prevalent in 34 cases while not evident in 4 cases. The details of necrosis were not available in total of 2 cases. The follow up details clearly reveal that the GBMO patients are favored in survival over the GBM patients (Figure 2). The median survival of 16 months was observed in GBMO patients while 12 for the GBM patients (Figure 3). There was statistically significant difference observed among the survival of GBMO/GBM patients. 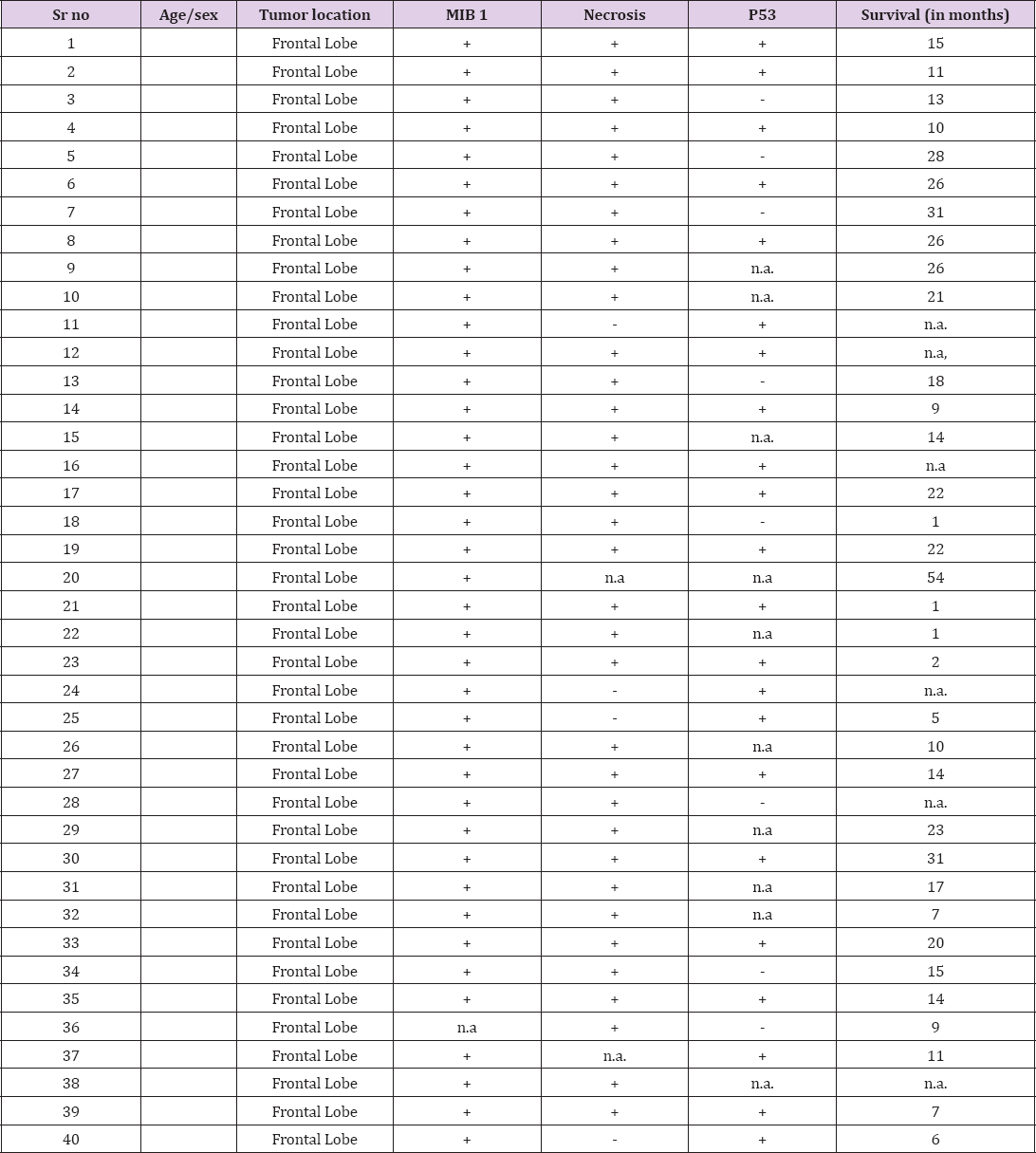 Figure 1: H and E staining of glioblastoma multiformae (GBM) (A) and glioblastoma with oligodendroglial component (GBMO) (B) Immunohistochemical staining of MIB1 (C) and p53 (D) in GBMO (40X). 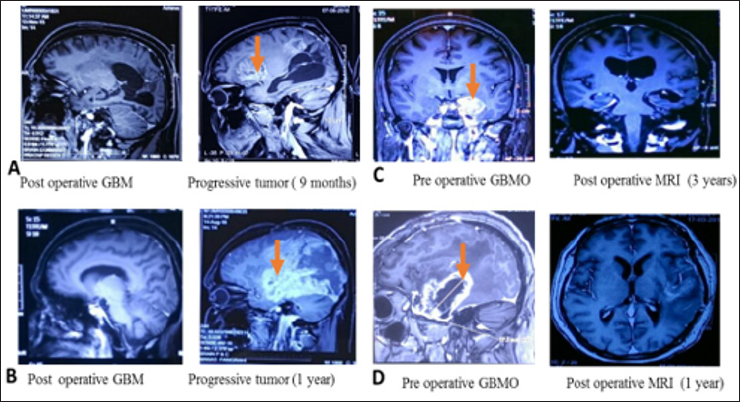 It is apparent that the probability of deaths in GBM group was 2.01 times more than in GBMO group. Glioblastoma patients were found with 11 mean survival months while GBM with oligo component patients were found to have 16.9 months of mean survival. We have studied total of 40 GBMO cases (Table 1). Survival details were not available with 04 cases. We also found anatomic origin of tumor. In 40 cases, 13 found to be at frontal lobe, 06 at parietal lobe, 16 at temporal lobe and 04 at occipital lobe. Here, we observed non uniform distribution of tumor in brain mainly dominated by frontal and temporal lobe. Out of total subjects studied, 20 have been reported to survive for more than 2 years. In our group, we observed 50% of patients were older than 50 years at the time of diagnosis while previous studies [1,14] claims this percentage to be more than 80%. We have also studied for MIB1 and p53 expression profile in our group. Out of 40 GBMO cases, 22 were found to be positive with p53 overexpression while 4 cases were negative.

Details were not available with 10 cases. Overall, we found p53 positivity in 55% of cases. Recent reports claims p53 positivity in more than 70% of cases and is associated with IDH1 mutations [10,15]. Of total 40 GBMO cases, 38 (95%) were found to be positive for MIB1 staining while other reports claims this positivity to be as low as 31% [16] and do not possess prognostic significance [17]. We found necrosis to be prevalent in 34 (85%) cases. 2 cases were found to be negative while data was not available for 4 cases. Previous reports support for presence of necrosis in GBMO [13] and has been correlated with less favorable prognosis in anaplastic oligoastrocytoma [18,19]. GBMOs are being reported with varying frequencies of IDH mutations and lower expression of MGMT. Clinically, the IDH mutations were associated with increased overall survival. The differences have been noted in pattern of this signature marker in conventional GBM and GBMO. Nearly 20% of GBMO were reported with IDH mutations while this percentage was sored up to nearly 90% in secondary GBM. More understating of it can provide the molecular, heterogeneous and clinical profile of GBMO [10,14]. Oligoastrocytic tumors with necrosis have been designated as glioblastomas with oligodendroglial component by WHO 2007 classification [1]. On pathological scale, GBMOs are defined as anaplastic astrocytic tumors with necrosis [20,21] and develops from malignant transformation of low-grade glial tumors. Collectively, GBMO entity was associated with better survival as compared to GBM with overexpression of p53 and MIB-1. So, a combined approach to look for associated genetic mutations is necessary to underline its intrinsic nature as prognostic marker.

The authors acknowledge KFRC, KIMS for the ethical permission.

Informed consent was obtained from all individual participants included in the study.