Method: We exposed HeLa cells to different concentrations of Fucoxanthin for 24 hours. The effect of Fucoxanthin on PI3K/Akt signaling pathway related proteins was detected by Western blot. In order to analyze the relationship between nuclear transcription factor activity and Fucoxanthin, the activity of NF-kappa B and AP-1 was determined by luciferase reporter gene assay.

Conclusion: NF-kappa B may be the mediator of Fucoxanthin-induced apoptosis in HeLa cells. As an ideal target for tumor therapy, NF-kappa B can regulate some genes involved in the development and progression of cervical cancer and inhibit cell apoptosis by activating several anti- apoptosis genes.

Epidemiological studies have found that cervical cancer is closely related to human papilloma virus (HPV) infection, probably due to genetic damage of cells and integration of high-risk HPV- DNA [1]. Studies have shown that PI3K/Akt signal is over-activated in various human squamous cell carcinomas associated with HPV infection. This conclusion has been further confirmed in cervical cancer. Abnormal activation of this pathway and HPV-encoded E-series carcinogens have been reported to play a synergistic role in promoting malignant transformation of cervical cells [2]. transfected cervical cancer cells with E5 gene and found that E5 protein could up-regulate the expression of vascular endothelial growth factor by activating PI3K/Akt signal [3]. Transfected cervical cancer HeLa cells with lentiviral vector carrying siRNA of HPV18-E6 gene. It was found that inhibition of E6 protein expression could significantly down-regulate Akt expression at mRNA and protein levels, effectively inhibiting the growth of HeLa cells [4].

It was also found that over-activation of mTOR could inactivate the phosphorylation of 4EBPl, the downstream target of mTOR, up-regulate the level of E7 mRNA cap-dependent translation and maintain the high expression of E7 protein. In turn, E7 protein could increase the level of Akt phosphorylation and maintain the survival of tumor cells by inhibiting Bax, the precursor of apoptosis (Figure 1). PI3K/Akt/mTOR signal transduction pathway and gene changes and mutations are the fundamental causes of malignant tumors. Gene mutations related to cell growth regulation are particularly common in tumorigenesis. Some studies have shown that activation of PI3K/Akt signaling pathway can cause serious imbalance in the spectrum of many human tumors, such as ovarian cancer, breast cancer, malignant glioma, endometrial cancer, thus affecting a variety of downstream effector molecules. Activation of the PI3K/Akt pathway is also associated with the metabolic disturbance of cervical cancer [5] (Table 1).

Figure 1: Effect of fucoxanthin on the expression of Bax and Bcl-2 protein.

Table 1: Effect of fucoxanthin on the expression of Bax and Bcl-2 protein.

Lee and his colleagues reported that the use of PI3K inhibitor LY294002 increased the in vitro radiosensitivity of cervical cancer cell lines [6]. NF-kappa B is a protein complex that controls gene transcription. NF-kappa B is activated in many cancers, including inflammation, transformation, proliferation, and angiogenesis. NF- kappa B mediates the inhibition of apoptosis by biological signals and promotes the growth of tumor cells. The dimer of nuclear transcription factor AP-1, Fos and Jun proteins has a wide range of astonishing effects on cell proliferation and apoptosis [7] (Table 2).

PI3K/Akt/mTOR signaling pathway plays an important role in the development and treatment of cervical cancer. As a new target of tumor therapy, the related research is not enough. Therefore, it is worthwhile to further clarify the role of PI3K/Akt pathway and its gene expression in the pathogenesis of cervical cancer, to explore the regulation of PI3K/Akt pathway and its interaction with other pathways, to determine the most effective therapeutic targets and methods, and to search for ideal antitumor drugs.

Table 2: Effect of fucoxanthin on the expression of Caspase-3protein.

Fucoxanthin (purity (>99.68%) was purchased from Anhui University of Traditional Chinese Medicine (Hefei, China). It was suspended in 5% sodium carboxymethyl cellulose solution before use. Other chemicals are at the highest level. Cell culture reagents come from Gibco life science and Technology Corporation (NY, USA).

Figure 2: Effect of fucoxanthin on the expression of Caspase-3protein.

First extract the total protein of HeLa cells from different groups after treated with Fucoxanthin by PMSF lysate; after electrophoresis, the proteins in the tested samples were divided into different bands according to the large molecular weight of the protein in the gel samples; after that, the desired target bands were transferred to the PVDF membrane; the indirect immunoenzyme standard was used. The method is chem luminescence and darkroom development (Table 3).

Table 3: Effect of fucoxanthin on the expression of PI3K/Akt protein.

Figure 3: Effect of fucoxanthin on the expression of PI3K Akt protein.

Effect of on the Expression of Bcl-2 and Bax Protein: The results showed that the expression of Bcl-2 decreased and that of Bax increased with the prolongation of action time. The apoptosis of HeLa cells could be induced by fucoxanthin of Bax to Bcl-2, which was time-dependent.

Influence on P13K / Akt: The results showed that after 24 hours, P13K decreased by 13.0%, 50.1% and 76.9% respectively, and Akt decreased by 12.5%, 31.2% and 61.5% respectively, which indicated that fucoxanthin could inhibit PI3K/Akt signal transduction pathway. This study confirmed that fucoxanthin could also induce apoptosis of HeLa cells. In this way, the PI3K/Akt signal transduction pathway may directly induce apoptosis of HeLa cells. The role of fucoxanthin is extensive, and its specific mechanism needs further study. luciferase reporter assay results

In order to analyze the relationship between nuclear transcription factor activity and fucoxanthin, the activity of NF- kappa B and AP-1 was determined by luciferase reporter gene method. The results showed that fucoxanthin dose-dependent decreased the activation level of NF-kappa B (Figure 4) but had no significant effect on AP-1 (Figure 5). 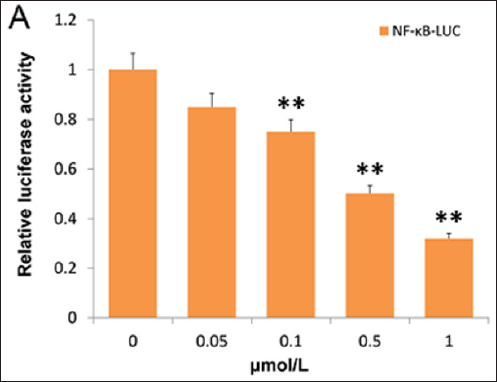 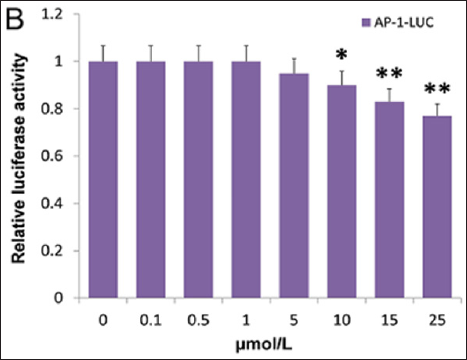 fucoxanthin inhibits the transfer of NF-kappa B from cytoplasm to nucleus and increases the protein level of NF-kappa B (P65) in cytoplasm. These data suggest that NF- kappa B may be the vector for HeLa cells apoptosis induced by algal yellow substance.

Above studies showed that the cells were exposed to different concentrations of Fucoxanthin for 24 hours. Western blot analysis showed that Fucoxanthin inactivated the Akt pathway, inhibited the protein level of Bcl-2, induced Bax production and caspase-3 cleavage (Figure 6). Therefore, the results suggest that Fucoxanthin may inhibit the growth of HeLa cells by inhibiting PI3K/Akt signaling pathway. Fucoxanthin inhibits the activation of NF-kappa B in HeLa cells. As an ideal target for tumor therapy, NF-kappa B can regulate some genes involved in the development and progression of cancer and inhibit cell apoptosis by activating several anti-apoptotic genes [8-10]. The induction and execution of apoptosis requires the coordination of a series of molecules, such as signal molecules, receptors, enzymes and gene-regulated proteins. Caspase protease family is considered to play a key role in the process of apoptosis. Caspase (cysteine aspartate-specific protease) belongs to cysteine protease, which is the key enzyme causing cell apoptosis. 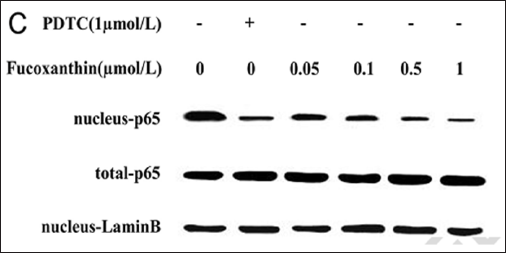 Caspase exists as an inactive proenzyme in cells. Under the regulation of apoptotic signals, the precursor pro-caspase is cleaved to produce two active subunits, which then triggers a series of caspase cascade amplification signal transduction processes [11]. Up to now, 14 caspases have been found, of which at least 8 caspases are associated with apoptosis [12]. They are usually classified into two broad categories: initial caspases, including Caspase-2, -8, -9, and-10; and execution caspases, including Caspase-3, -6, -7. Caspase-8 and -9 activate the death receptor pathway and mitochondrial pathway respectively [13]. Inducing apoptosis of tumor cells is an important strategy for tumor therapy. Most tumor therapies activate the apoptotic process of tumor cells to kill tumor cells. Therefore, it is an effective way to find out the exact molecular mechanism of tumor cell apoptosis and the apoptosis pathway of tumor cells treated by drugs. Abnormal activation of PI3K/Ak t pathway is thought to be important for the mechanisms of tumor cell escape from apoptosis, abnormal proliferation and tumor angiogenesis [14].

It is suggested that PI 3K/Akt signaling pathway may regulate apoptosis by regulating the activity of bc1-2 family members, inhibiting caspase's pro-apoptotic function and activating transcription factor NF-kappa B to promote cell proliferation [1516]. Specifically, activation of PI3K/Akt pathway can depolymerize Bcl-2 and make free Bcl-2 play its anti-apoptotic role; directly catalyze Caspase-3 and Caspase-9's Serl96 to inactivate it, and cause cells to proliferate excessively by inhibiting the apoptotic function of caspase; activate transcription factor NF-kappa B to promote it.After entering the nucleus, it inhibits cell apoptosis and promotes cell proliferation [17]. PI3K is a kind of phosphatidy linositol kinase, which catalyzes phosphorylation of groups, including PI3K, P14K and P15K. It is a key signal molecule in many life activities. It can mediate signal transduction pathways to regulate cell division, differentiation and apoptosis. The molecular weight of PI3K is 85KD. It is for the catalytic subunit P110 of 110KD [18].

Akt gene is a serine/threonine protein kinase, often called protein kinase B. It is a direct target protein downstream of P13K and can be directly activated by PI3K. HKT family members include Akt-1, Akt-2 and Akt-3 [19]. They are widely expressed in various tissues and have similar protein structures, but they are regulated by completely different gene coding. The amplification and over expression of Akt gene can be detected in a large number of human tumor cells. Studies have shown that the expression of phosphorylated Akt protein in cervical cancer is associated with the occurrence and development of cervical cancer and can be used as an independent risk factor for predicting adverse prognosis of patients [20]. The anti-apoptosis effect of PI3K/Akt signaling pathway may be related to the following mechanisms:

a) Regulating the activity of Bcl-2 family members. Bcl-2 family members are divided into two types: apoptosis inhibitory protein and pro apoptotic protein. Bcl-2, bcl-xL, bcl-G, MCL-1 and Bax, Bad and Bak can inhibit cell apoptosis. The formation and balance of homologous dimer and heterodimer of Bcl-2 family is the key to cell survival or apoptosis. Activation of PI3K- dependent Akt can phosphorylate Ser136/Ser112 residues of Bad, depolymerize phosphorylated Bad with Bcl-2 or bcl-xL, and bind Bad with anti-apoptotic binding protein, while free Bcl-2 plays an anti-apoptotic role [21]. At the same time, activation of PI3K/Akt pathway can inactivate the phosphorylation of Bax's Ser184 residue and inhibit cell apoptosis [22].

b) Inhibit the activation of aspartic specific cysteine protease family members. Activated Akt can directly catalyze the phosphorylation of caspase-9 to Ser196 and caspase-3, inactivate them and inhibit caspase-induced apoptosis.