Authors investigated toxic properties of diabetogenic derivatives of 8-hydroxyquinoline (8-OX) and of Diphenyl thiocarbazone (DZ) on the insulin producing cells of the pancreas and the protective effect of Glutathione on its toxic action. The mechanism of action of derivatives of 8-OX determined by the ability to form into cells containing zinc-ions a chelate salts with them 1:1 by sulfur and nitrogen atoms at positions 8 and 1 and through the oxygen atoms in positions 8 and 2. Diphenyl thiocarbazone formed chelates salts with zinc as 2:1, where in zinc coupled to the two atoms via Dithizone sulfur and nitrogen atoms. It is shown that the preventing effect has GRF, containing in structure of SH-radical unlike GOF, not containing it. It is found that administration of CRF to animals 1000mg/kg comp- letely protect B-cells of destruction determined by blocking of zinc by CRF. Results showed that this effect determined by blocking of zinc in B-cells by GRF. Authors suggest that atom of Zinc is fixed between atom of sulfur of the SH-radical and of atom of oxygen or nitrogen as after injections of 8-OX or DZ islet zinc binding too through atom of sulfur and oxygen.

Diphenyl thiocarbazone (Dithizon) and some derivatives of 8-oxyquinolin (8-ox) induced formation of toxic chelat complexes as “Zn-DZ” and “Zn-8-ox” in cytoplasm of B-cells that result selective destruction of B-cells within 15-30min. and accompanied by developing of 1st type diabetes in animals [1]. Later it was reported preventive injection of some amino acids as Cystein, L-Hystidine and Reduced form og Glutathione contains sulfhydril SH-radical in structure of molecule, accompanied by prevention B-cells of destruction caused by DZ and 8-ox that result prevention of developing of diabetes in majority of animals [2-5]. High durability of the Zn+2-Dithizon complex 2:1 (Figures 1 & 2) determined by space elongation of molecule of Dithizon and disposition of two phenolic rings on the ends of a molecule that does not prevent the atoms of sulfur and nitrogen located in the center of a molecule to approach zinc atom. Besides, atom of zinc is located between two atoms of nitrogen and sulfur, regarding to which affinity of zinc is very high and exceeds affinity to oxygen [6]. It was supposed that protective activity of Cystein and L-Hystidine may be determined by the presence of SH-radical in the structure of molecule because formation of chelate complexes with DZ and 8-ox is processed by connection of Zn atoms with atom of S, H, O or N [6].

Frosen sections of pancreas of animals 1a and 1b groups were investigated using dark micro- scopy. Blood glucose level measuring – in animals of 1b, 2a and 2b groups before injection of Dithi- zon and 1,3,6 and 9 days after injection. Aldehyde-fucshine method [7- 9] was used for analysis state of histostructure of pancreas tissue and Dithizon method formed red granules of complex “Zn-DZ” visible using dark microscopy. Maximum of absorbance of Zn+2- DZ complex on spectrum of absorbance correspond for 530nm [3]. 8-para(toluenesulphonylamino)quinolin/8PTSQ/, a high specific fluorescent reagent was used for staining of Zn-ions in B-cells. 8TSQ formed fluorescent green complexes with Zn+2-ions visible using fluorescent microscopy [10-12].

e. All histological preparats and microphotographs by Prof. Meyramov G.G. 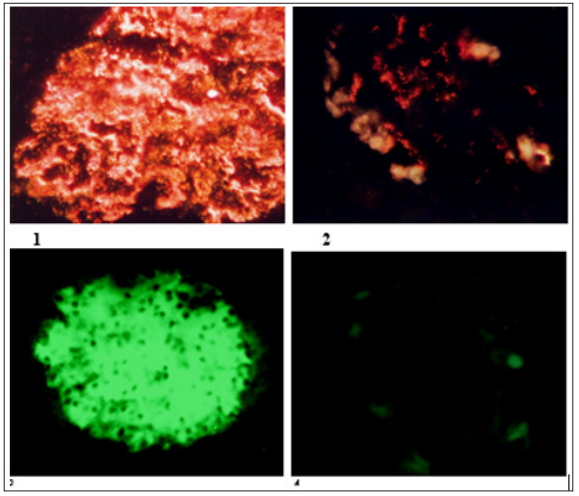 Experimental diabetes. Blood glucose concentration increased since 5,2±0,3 mM until 12,6 mM at 6th day and 16,4±1,7 mM at 9th day (Table 1). Histology: necrosis and destruction of 70-90% of B-cells, marked decreasing of insulin and zinc content in B-cells.

Table 1: Blood glucose concentration in rabbits after injection of Dithizon.

Administration of GRF before Dithizon accompanied by prevention developing of diabetes in 3 animals from 4 (Table 2,3). In one rabbit (N3) blood Glucose level increase till 9th day until 7,3. Histologic analysis showed decreasing of insulin content in cells without marked histological changes. 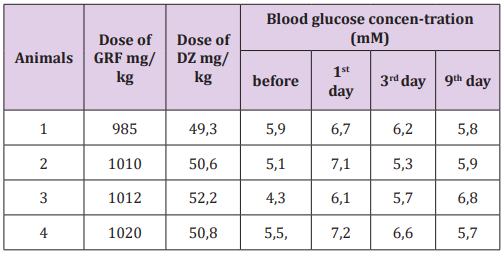 Injection of GOF: positive reaction for Zinc in B-cells with 8PTSQ (Figure 1).

Injection of GRF: negative reaction for Zinc in B-cells as result of binding by GRF (Figure 1).

Obtained results showed that administration of R-Glutathione result binding of almost all number of Zn-ions in B-cells reversibly as least for 24 hours. Injection of dithizon after R-Glutathione not accompanied by forming in B-cells of chelate complexes Zn-DZ that result prevention of damage and death of majority B-cells and prevention developing of diabetes in 3 animals from 4. It is known that amino acids Cystein and L-Hystidine possess same property: injection of acid result protects B-cells of destruction by Dithizon as of developing of diabetes in animals [6,13,14]. However, administration of Oxidized Glutathione not contains in structure of SH-radicals not protect B-cells of formation of Zn-DZ complex and of destruction of B-cells as of developing of diabetes [14]. Binding of Zn-ions of diabetes B-cells by a glutathione is apparently confirmed by existence of negative reaction for Zn for 24 hours. After that the complex gradually dissociated up and 48- 72 hours later Dithizon is able to form in B-cells toxic complex that accompanied by developing of experimental diabetes in animals.

It is known that in process of formation of the Zn+2-complex with Dithizon and diabetogenic derivatives of 8-oxyquinolin atom of zinc is fixed between S or O atoms in position 8, and N or O atoms – in positions 1 or 2 (Figure 2) [15]. Diabetogenic derivatives of 8-oxyquinolin have in the 8 position of quinolin ring active OH- radical or other radicals contains atoms of S, N or O (Figure 2). K Okamoto & A Albert [15] reported showed that Dithizon (Diphenylthiocarbazone) and derivatives of 8-oxyquinolin which usually belong to not toxic substances, is very toxic for cells in the pre<-se<-nce of metals and for the first time - of Zn - ions. It was showed that this fact determined by ability of 8-oxy<-qu<-inolin to form with metals the chelat metal-complexes which are toxic for B-cells [15] as complexes formed in B-cells by other chelat active substance as Dithizon. Studying of toxicity of 8-oxy<-qui<-nolin for B-cells Oka<-moto K [1] reported that injection of it to animals accompanied by destruction of pancreatic B-cells and de<-veloping of experimental diabetes. La<-ter it was showed that injection of 18 derivatives of 8-oxy<-quino<-lin (8-OXY) result formation in B-cells of color complexes Zinc-chelator destruction of B-cells that accompanied by destruction of B-cells within 15-30 min that result developing of 1st type diabetes in animals.

It was no<-ted that all 8-OXY contains in position 8 of quinolin ring OH- group or any other radical contai<-ns atom of S or atom of O or N. I was showed that 8-OXY possess high affinity for Zinc and formed via radical in position 8 chelat salts with Zinc (Fig 2).Six iso<-mers of 8-oxyquinolin not contains in posi<-tion 8 of active group are not able to form chelat complexes with Zn-ions and not induced experimental diabetes. Expe<-ri<-mental diabetes is induced by derivatives as 8-pa-ra(toluenesulphinylamino) quinolin/8PTSQ/,8-para(benzol<-sulpho<-nylamino) quinolin /8PBSQ/, 8-para<-(me<-thansulphonylamino) quinolin /8PMSQ/, 5-para(acetaminophenylso)-8-oxyqui<-no<-lin/5A8OX/,8- hydro<-xy<-quinaldin,5-amino-8-ydroxyquinolin and others (Figure 2). It was demonstrated by Okamoto K. and Kado<-ta I. that injection of these deri<-va<-tives result selective necrosis of B-cells. Injection of these che<-mic<-als in doses of 30-100mg/kg result developing within a few days of heavy diabetes with marked degenerative changes in islets (1,3-4,11). It is known that most stable complexes are formed when atom of Zn is fixed bet<-we<-en atoms of S and O in position 8 and between atoms of N and O in position 1 or 2.

It was shwed that only derivatives of 8-oxyquinolin contained in po<-sition 8 of qui<-nolin ring of the hydroxyl or other radical contained atoms of S,N or O possess diabetogenic pro<-pe<-rties [15]. It is known, what is more, that extraction of these radicals from position 8 accompanied by complete disappearing of diabe<-togenic properties of chelators [16]. Formation of chelats by atoms of O and N of chelator result usu<-ally forming of pentagonal or hexagonal rings [1,15] (Figure 1). Pentagonal rings are more stable. The most stable are quad<-rangular complexes with atom of S. It is known that derivatives of 8-oxyquinolin formed quadra<-go<-nal co<-mp<-lexes with atom of S often. Electrons of indivisible pair are displaced from donor-atom of N in position 1 to Zn atom. On the base of data obtained by A. Albert, G. Zentmyer supposed that toxic effect of 8-oxyqui-nolin is de<-termined by its ability to bind and eliminate ions of metal from B-cells. But later this hypothesis was not confirmed: it was showed that long time prolonged elimination of Zn-ions from B-cells result any effect on the state of histostructure and function of B-ce<-l<-ls.

Finally, S.Rubbo and A.Albert established that toxic effect of 8-oxyquinolin determined by its ability to form in cells toxic complexes with metals [17] that many times was confirmed later. It was showed that pres<-e<-nce of chelat a short time in cytoplasm of B-cells accompanied by alteration of cells. In experiences with using derivatives of 8-oxyquinolin - a various isomers of the azaoxyquinolin (azaoxyn)- it was demonstrated dependence: most toxic are isomers formed chelats 1:1 with metal have loga<-rifm of constant of stability as 7.6 and high, until 9.4. Mean<-w<-hile toxicity of chelats of other isomers of azaoxyn with constant of stability 5.8-6.7 was clearly more less [5,15]. It was showed that very toxic chelats of deri<-vatives of 8-oxyquinolin with Zn-ions have a high loga<-ri<-fm of constant of stability as 8.5. Weitzel G.and coll. sho<-wed that complex 1:1 contained 1 molecule of 8-oxyquinolin and 1 atom of ion of Zn is most toxic for cells [18]. Stability of formed complexes 2:1 is depended not only of affinity of chelator to metal but by 2 properties of chelator and metal:

a. presence of additional radicals in para-positions molecule of chelator, especially - in zones which contacted with part of molecule, reacted with ions of metal conduce to forming of the steric effect; as result, two molecules of chelator are not able to approach for to put atom of metal in stable ring;

A high stability of complex Zn-Dithizon is determined by stretch form of molecule of Dithizon and by location of 2 phenol rings on the 2 ends of molecule. That is why atom of N and S are easy approach to atom of Zn. Moreover, atom of Zn is fixed between atoms of N and S. Meanwhile it is known that affinity of Zn to N and S is higher comparatively with affinity of Zn to O. In added, complex is formed by two molecules of Dithizon each of two have a great number ofdouble couplings [1,5,15]. Stability of complexes 1:1 formed by derivatives of 8-oxyquinolin is determined by great number of double coupling in molecule of chelator; by forming of quadragonal ring; derivatives of 8-arensulphonyl amino quinolin formed chelatecomplex by aid of atom of S. More high stability of the complex ZnXanthurenic Acid is determined in added by fixation of the atom of Zn between 2 atoms of O. Isomers of 8-oxyqunolines not contains in this position such radicals or atoms, or if these radicals extracted from a molecule – not capable to form complex salts with zinc and not possess completely diabetogenic properties. It is necessary to return the active radicals in position 8 for to restore diabetogenic activity of substance [16].

Formation of the chelate complex by atoms of O and N accompanied by forming of pentagonal or hexagonal rings [15]. SH group contains sulfur atom. Meanwhile, as described above, it is known that sulfur atom participates in formation of the chelate complexes with Zn as well as N, O and C atoms. It is known that in process of formation of the Zn+2-complex with Dithizon and diabetogenic derivatives of 8-oxyquinolin atom of zinc is fixed between S or O atoms in position 8, and N or O atoms – in positions 1 or 2 (Figure 2) [15]. On the base of obtained results we suppose that negative fluorescent reaction for Zn in B-cells after administration of Glutathione Reduced form determined by binding of Zn-ions via atom of sulfur of the SH-group and followed disposition of zinc atom between atom of sulfur and, probably, atom of oxygen or nitrogen (Figures 3 & 4). 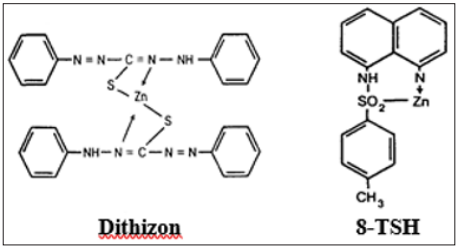 a. Amino acid Glutathione Reduced form contain in structure of SH-radical, 1000 mg/kg protect B-cells of formation complexes with diabetogenic zinc binding chelators and protect of destruction of B-cells as prevent developing of diabetes in animals.

c. Administration of Glutathione Reduced form to animals result blocking of Zn-ions in B-cells that protect of interaction of metal with diabetogenic chelators.

d. We suppose that preventive effect after administration of Glutathione Reduced form determined by binding of Zn-ions via atom of sulfur of the SH-group and followed disposition of zinc atom between atom of sulfur and atom of oxygen or nitrogen.