Melanoma skin cancer has been one of the quickest uprisings of totally cancers, which has a high hazard of prevalence. This deadliest form of melanoma must be detected premature for effective handling. In this work, a technique was used to aid the premature detection of skin cancer lesions. For the segmentation to be considered correct using the Artificial Bee Colony (ABC) method, the result obtained was compared with the segmentation of the dermatologist. This method is applied on dermoscopy images were obtained of the PH2 database. The algorithm is one of the foremost widespread techniques to obtain infinite chances to solve the ABC rule that provides accurate results in the quickest possible time. The artificial bee colony algorithm recognizes whether moles are melanoma or not and at any stage of danger also the results are compared with the results from the existing algorithm of melanoma detection; it achieved good results in the conditions of high specificity, accuracy and sensitivity (92.50,97.20,93.02) %. The ABC algorithmic is effective and improves early detection with high accuracy for skin lesions leads to decrease in death rates.

Meta- heuristic methods optimization algorithm is depending on contact and cooperation between individuals in a set of organisms [1]. In USA in 2013, there was more than 76,000 persons are diagnosed with skin cancer and 12% would die. The current position is that malignant melanoma occurrence rates are very high. From 1992 until the present day, research concerning the Malignant Melanoma (MM) found that occurrence average for non- Hispanic white men and women were rising yearly rate of roughly ten percent. If malignant is noticed near the beginning, where it is categorized at stage I (t= 0.76 mm), the past 5 years rate of survival is ninety-six percentages. In the opposite, rate of survival reduced to 4% for the past five years, if the malignant was in Phase IV [2,3]. The ACSs evaluates for malignant melanoma in the USA for 2018 are about 91,270 new malignant cases will be detected (55,150 in males and 36,120 in females), and the number 9,320 persons are predictable to die of MM (5,990 males and 3,330 females) [4]. Barata et al. [5] used color constancy to improve dermoscopy image categorization for skin lesions detection method.

Guo et al evaluated the results validate of the Neutrosophic clustering and adaptive region growing methods on 500 images to achieve better performance for detection the skin lesions when compared with another segmentation method [12]. Abbes & D Sellami [13] searched for bag of words (FoW) model in semantic annotation utilizing machine learning (SVM) to develop the automatic skin lesion categorization. For using knowledge transfer approach ofskin tumors screening by deep learning machine to reach high specificity, the results suggest that the experimental design is sensitive to the choice of lesions positive or negative classes [14]. Xie et al. [15] developed a new algorithm with a Self-Generating Neural Network (SGNN) and features descriptive of tumor color to get high accuracy for classified model is melanomas case or benign case [15]. The best combination of features, depended on shape properties, colour variation and texture analysis, by using different feature extraction methods it can be extracted, by an optimum path forest classifier promising results are achieved Mahdiraji et al.[16] worked in the same field of color variation of the skin lesion images, acquired with standard cameras computational methods are introduced based on Multilayer perceptron neural network, the results are best compared with results of DermIs and Derm Quest databases [16].

The ABC algorithm receives input from the segmented image of the skin lesion, the proposed model improves existing methods in the field of detection skin tumors to support the doctors to get the correction decision after segmentation and final detected image compared with ground truth. On the way to skin cancer lesions detection was ABC algorithm to help contributors develop image examination devices to enable the automated analysis of malignant melanoma from dermoscopic images. We modify and extend the ABC segmentation method. Based on the factor of the skin lesion, the ABC algorithm found the optimum threshold value for the detection of the melanoma from the skin lesion. Despite the good results previously presented, the proposed technique suggests a problem of over-adjustment, that is, the statistical model adjusted too closely to the set of samples. And, thus obtaining a better understanding in the detection and aiming the development of software. To be tested in clinics and hospitals, helping to reduce the rate of mortality for this and other cancers.

Artificial Bee Colony (ABC) algorithm is one of the better, modern nature motivated optimization algorithms improved by intelligent searching performance of honey bee swarms. In the ABC algorithm, searching honey bees are classified into three sets; specifically, worker bees, onlooker bees and scout bees. The procedure of foraging begins with the scout bees being sent to find food resources in the colony surroundings in a chance distribution [17] . This dance is crucial for the bee communication and describes the food resource direction and nectar (fitness value). The onlooker bees select the most profitable source based on all the information revealed by the waggle dances. The ABC is a computational intelligence of the procedure of estimation via natural election. The artificial bee colony algorithm is shown in Figure 1. Then the flowchart of utilized steps by ABC algorithm instituted skin cancer detection as shown in Figure 2. There are three steps for the ABC method. 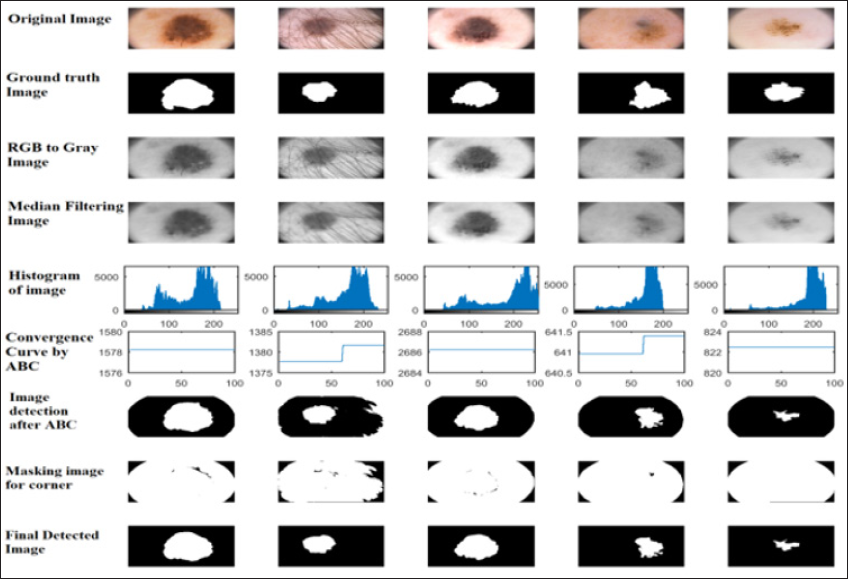 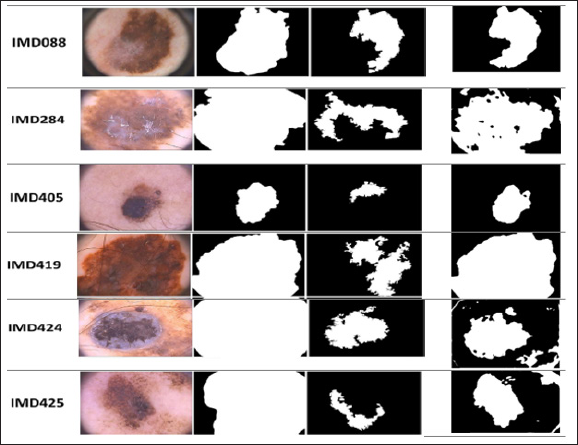 A-Movement of the Onlookers: Calculation of the new position from equation:

YK: an arbitrarily elected contestant solution, LBij: The position of the onlooker bee., LB the minimum and UB the maximum limits are the jth length size, r: The randomly chosen worker bee [-1, 1], j: The dimension of the solution.

j: an arbitrary length index selected from the group. a (0, 1) depend on an ordinary distribution and then the best solution is selected between the food source and their candidate solution.

C-Movement of the Onlookers: Probability of selecting a nectar source:

Pi: The probability of choosing the ith worker be, SR: The number of worker bees, F: The fitness value, yk: Arbitrarily selected candidate solution (i≠k). There are numerous advantages for using the ABC procedure, good updated information to lead the honey bees and the detection of new fields by dance designing. The steps in the artificial bee colony algorithm can be explained as: -

Initialize the food resource. Find the fitness values for random solution. Onlooker bees select a source depending on the best quality of the solution (1). Find possibility value for every food resource based on equation (2). Assign worker bees as scouts to discover a new food resource. Fresh solution for Onlooker. Update position of the bees it with equation (3). If Requirements criterion met exceeds maximum number of iterations, then after that stop the process and display the output results, Else Repeat to the Step 2. End

In this section, the methodology of melanoma detection depends on the ABC method as shown in Figure 1. The input data were captured from the200 RGB PH2 datasets of the Cancer Centre and Institute of Oncology, as dermoscopic images [18]. The steps of all rows of methodology are shown in Figure 1: a-row 1 original image taken from camera or dermoscopy, b- row 2 ground truth images to compared with original image, c- row 3 convert RGB to gray image, d- row 4 using median filter to eliminate noise, e- row 5 getting histogram of image, f- row 6 convergence curves by ABC method. g- row 7 process image detection after ABC, h- row 8 masking images for corner and i- row 9 final steps to detect image. Table 1 shows the performance factors are used from the equations below.

In view of all the situations, the proposed method for the detection of melanoma presented in this study aims to facilitate the detection of this type of cancer in its initial stage and thus, provide the appropriate treatment to the patients. The results are achieved using a MATLAB 2015b version. The total 200 images are processed, and the relevant data is achieved. To compare the effectiveness, the positive predicted value, negative predicted value, accuracy, computation time, specificity and sensitivity are accepted for Analytics. Figure 2. Show the melanoma image processed that prove the validation of the proposed algorithm. In order to verify the results of the proposed method, it is compared with a newly developed method [5-7,9,10,13,19]. Six melanoma images are selected randomly and detection is carried out with both the proposed method and ASLM method from PH2 databases. Figure 2 shows the performance parameter comparison for the 200 images detection utilizing the artificial bee colony compared with another method are using in Table 2. For the effectiveness of the proposed method, it is compared with already presented melanoma detection techniques from Figure 2. with groups of200 images from databases. From these results, the proposed method has superior parameters in specificity, accuracy and sensitivity (92.50,97.20,93.02) % but it is not favoured for other considered algorithms. The proposed method has a superior sensitivity property than other considered methods, excluding another method.

Table 2: The performance factors of the proposed method (%).

On the other hand, if the sensitivity of the experiments is captured as the most significant a part, it means that every patient with skin cancer is detected, and this method (ABC) is the best system in the comparison. So, it can be determined that the introduced method is a good and healthy decision to avoid false negatives when detection melanoma skin cancer. Table 2 shows the performance factors of the proposed method (%) are used. To experimentally compare the implementation of the advanced segmentation algorithm with existing state of the art segmentation algorithms applying recognized statistical assessment parameters. The proposed ABC algorithm was confirmed on a two hundred challenging various benign and melanoma medical images obtained from PH2 databases.

In this paper, artificial bee colony established melanoma detection has proposed. Moreover, its computation time to detect a melanoma image is very fast. Since this detection is done in several steps where the specialist should do a careful analysis based solely on the information of the patients and their knowledge about the case. For comparison with the related works, it can be said that the proposed method obtained better results that the use of the databases of images were different. The methodology in this study was satisfactory, since, with the increase of the characteristics analyzed, the accuracy, sensitivity and specificity near may be reached at 100% success rate. Finally, the proposed method is more suitable for detecting melanoma in the skin. In near future this work will develop to detect different deep problems of skin not only cancer.