A rare case of a cerebral abscess due to S. Apiospermum in fifty-seven-year-old immunosuppressed female. The brain magnetic resonance imaging revealed a right frontal ill-defined heterogenous lesion with surrounding multiple discrete low-signal foci lesions both on T1WI and on T2-WI with prominent susceptibility artifacts. We think that the foci represent the grains of the fungi itself, causing marked susceptibility artifacts, similar to previous reports in the literature of this specific infection, especially as has been demonstrated in Madura foot cases.

Figure 1: Fungal abscess in the right frontal lobe of a 57-year-old female with SLE who was immunocompromised due to treatment with Cyclosporine. Axial T2-weighted image (A) shows a well-defined heterogeneous lesion in the right frontal lobe with an irregular hypointense wall and intermediate intensity in the center of the lesion. The margins of the fungal wall are crenated. Axial T1-weighted image (B) shows a hypointense core with isointense intracavitary projections. Postcontrast axial T1-weighted image (C) shows peripheral enhancement of the wall with no enhancement of intracavitary projections. Diffusion-weighted image (D) shows hyperintensity in the projections with concomitant low ADC values (E). 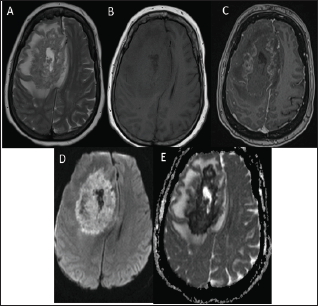 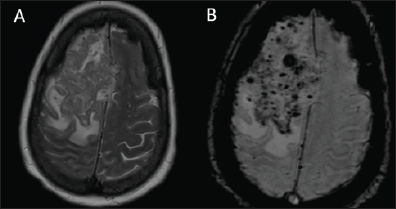 We encountered a rare case of a fifty-seven-year-old immunosuppressed female due to treatment with Cyclosporine for systemic lupus erythematous (SLE), who developed a cerebral abscess due to Scedosporium apiospermum infection. There are indeed abundant radiological reports in the literature of brain abscess due to S.apiospermum, however, we observed a unique feature that hasn't been previously reported on brain magnetic resonance imaging (MRI). Our patient had a brain MRI which revealed a right frontal ill-defined heterogenous lesion with irregular crenated hypointense wall on T2-weighted images (WI)and isointense with peripheral enhancement on T1WI (Figure 1). Surrounding the lesion, we observed multiple discrete low-signal foci lesions both on T1WI and on T2-WI of varying sizes, which manifested prominent susceptibility artifacts on susceptibility weighted imaging (SWI) sequence (Figure 2). Our assumption is that these multiple foci represent the grains of the fungi itself, causing marked susceptibility artifacts, rather than microbleeds, as could have been assumed in the differential diagnosis of this feature. We support our assumptions on previous MRI reports in the literature of this specific infection, especially as has been demonstrated in Madura foot cases.

S. Apiospermum is the asexual form of Pseudoallescheria boydii, typically found in soil sewage, polluted water, and farm animal manure [1,2]. This organism disproportionately affects the central nervous system especially in immunocompromised patients [3,4], carrying a poor prognosis and a high rate of mortality [3] despite prompt therapy implementation [2-5]. P boydii, was also described more than a century ago as a cause of a unique foot infection called Madura foot and recently, it has been isolated from other bodily areas such as the lungs [6,7], soft tissues [8-10], bones [11], eyes [12], sinuses [13], and the brain causing meningitis and brain abscesses [14,15]. The MRI features of Madura foot caused by this organism were broadly covered in the literature and includes a report by Czechowski et al. [16] who specifically described small lesions of low signal intensity on T1 WI and T2 WI on MRI in 16 of 20 patients and suggested that these appearances were due to susceptibility from the metabolic products within the grains. Our assumption lays on the resemblance of the Madura foot MRI features to the one's described in our patient.

The ability to view grains on MRI could aid the preliminary identification of an organism, since it depends on multiple factors including grain size which is distinct for each organism. In our case, the grains were seen as tiny dots on T2-weighted images and were most conspicuous on SWI. S. apiospermum is known to produce large granules of 1-10 mm [17], which supports our ability to visualize those granules. This also assists in the differential diagnosis of this brain lesion, which could have been confused with cystic neoplasm such as central nervous system Lymphoma. Radiological- histologic correlation of the Madura foot revealed a granulomatous inflammatory response with grains composed of collections of fungal organisms with central portions containing small micro abscesses with numerous neutrophil polymorphs and organisms. Correlating to the MRI findings, it was evident that the small lesions of low signal intensity on T1- and T2-weighted images were due to susceptibility from the metabolic products within the grains [17].

Obviously, a radiological-histological correlation is required for brain lesions as well, which is unavailable to us, therefor, further studies are needed. In a large summary of case studies by Kantarcioglu et al. involving CNS infections by S. apiospermum, the most characteristic histological findings in the brain tissue were the presence of a neutrophylic inflammatory infiltrate, granulomatous inflammation with multinucleate cellular tissue reaction and micro abscesses with hyphae invading cerebellar blood vessels, similar to the histology seen in Madura foot cases [3].

In conclusion, we suspect that the prominent susceptibility signals observed on SWI result from the granules of S. apiospermum in this brain abscess, rather than being microbleeds. We support our assumption on previous reports of this specific infection in Madura foot cases. This feature can assist in the differential diagnosis of future cases, supporting the diagnosis of a fungal infection.