Tuberculosis (TB) is a serious public health problem in the world that intensifies when people reach advanced ages, also due to the proliferation of drug-resistant strains, among other reasons. Risk factors such as HIV, poverty, alcohol, smoking, immunosuppression of different origins, among others, increase the probability of contracting it. For these reasons, it is essential to make an optimal diagnosis, which allows an accurate detection of the infection, fast, efficient, sensitive, specific, economic. Among the tests used are: chest x-ray, sputum microscopy, culture in liquid and solid media and amplification of nucleic acids.

Tuberculosis (TB) is a contagious disease produced by bacillus of the complex Mycobacterium tuberculosis, cuyo principal miembro que produce TB humana es M. tuberculosis. This infection spreads in all countries of the world; however, the data provided by the WHO [in the World Tuberculosis Report 2017] [1] indicate that 18 have the highest incidences with more than 100,000 new cases in 2016 [2]. According to this organization, the largest proportions of cases (64%) is distributed in only seven countries: India (27%), Indonesia (10%), China (9%), Philippines (5%), Pakistan (5%), South Africa (4%) and Nigeria (4%). The most affected areas are Asia (45%), Africa (25%) and the Western Pacific (17%). TB remains one of the infectious diseases with the highest mortality in the world [3]. However, despite the gloomy outlook, there is good news about the global progress in the period 20002016: the number of deaths fell by 24%, the death rate (deaths per 100,000 people / year) decreased to 37%, the incidence (new cases per 100,000 people / year) has presented a decrease of 1-4% per year, and 53 million deaths were prevented through successful treatment.

The infection occurs through airborne particles, which have been called doplet nuclei that are 1-5 microns in diameter [4] These nuclei are tiny droplets of water containing the bacteria expulsed when people with pulmonary tb or larinx tb perform any activity that cause delivery of saliva, that is, the bacteria that originate tb are transmitted via the air. the capacity of a person to transmit this disease is closely related to the amount of bacilli tuberculosis that is expelled into the environment. the transmission originates when an individual sucks the nuclei with bacilli, crosses the mouth or nasal passages, the upper respiratory tract and the bronchi to reach the alveoli of the lungs. bacilli are ingested by alveolar macrophages and most of them are eliminated, but some survive inside these cells, multiply and reach a time when they leave the bloodstream and can invade other tissues such as: regional lymph nodes, larynx, apex of the lung, kidneys, brain and bones (Figure 1). 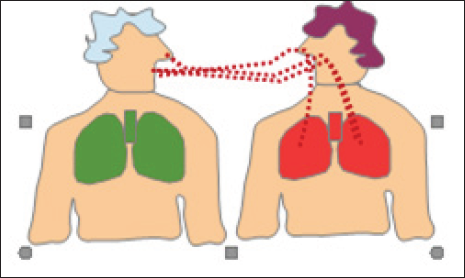 Pulmonary TB can cause the following symptoms: cough with blood (lasting more than three weeks), lack of appetite, chest pain, weight loss for no apparent reason, physical exhaustion, fever. In extrapulmonary TB, the following manifestations are generated: blood in the urine due to damage to the kidneys, back pain due to spinal cord damage, headache due to TB meningitis, hoarseness due to TB of the larynx and other symptoms such as thinning, loss of energy, lack of appetite.

It can be done by:

a) Mantoux Tuberculin Skin Test (TST) by injection under the skin of the purified tuberculin protein derivative PPD-RT23 that produces a delayed-type hypersensitivity reaction from 2 to 8 weeks from the start of infection, its main drawback it is the lack of specificity

b) mycobacterial culture, which has the highest sensitivity for diagnosing and confirming active TB, requires 2 to 6 weeks for interpretation and the only one that allows evaluating the efficacy of the patient's chemotherapy treatment and guaranteeing its cure [5]

c) sputum smear microscopy is a simple, inexpensive and the main tool for TB diagnosis, it has low and variable sensitivity and it takes 1-2 days to provide results. In recent years, molecular assays have been developed for early detection, with high specificity but minimal specificity. The choice of the procedure to be used depends on the environment and the capacities of each affected community, such as rural and urban areas, provision of the laboratory that evaluates the samples of potential infected, access to an X Ray device, presence of reagents and necessary equipment to perform culture and sputum exam.

Due to the disadvantages of the use of a single diagnostic test such as lack of sensitivity and specificity, it has been chosen to carry out several tests together to increase the degree of safety of the result obtained, thus it is recommended to detect TB by chest X- ray, sputum microscopy, culture (liquid and solid media), and nucleic acid amplification. The optimal implementation of these trials favors the early administration of chemotherapy, which can prevent infection and preserve the lives of millions of affected individuals.