This study aimed to evaluate the influence of storage temperature on the maintenance of bleaching agent concentration and whether concentrations are within the recommendations of the International Standard for products for external tooth bleaching. The samples consisted of ten commercially manufactured and four compounded tooth whitening gels. Hydrogen peroxide and carbamide peroxide bleachin agents at different concentrations were included on analysis. The United States Pharmacopeia and International Standard methods was used to determine the amount of peroxide, in the agents of different brands and concentrations after products storage at 3°C, 20°C and 40°C by 8 days. Analysis was repeated 8 times for each temperature. Differences between means was analyzed by ANOVA and Tukey test at 1% of significance. In general, storage at hot temperatures decreases the peroxide concentration. None of the tested bleaching agents match the labeled peroxide concentration, especially those based on carbamide peroxide from dispensing pharmacy that has differences less than 30% from labeled. These findings indicate that the storage temperature influences the concentration of the peroxides tested.

Tooth whitening is increasingly requested by many patients. The degree of efficacy and speed of action of tooth bleaching depend on some variables, including the concentration of the active ingredient and the contact time of the product with the tooth surface [1]. A recent study on hydrogen peroxide- and carbamide peroxide-based bleaching systems has shown that tooth whitening is safe and effective when the manufacturer's instructions are followed, and that both the dental practitioner and the patient should be aware of the care plan and risks involved [2]. The efficacy and safety of commercial bleaching agents have been demonstrated in several studies using trays with different concentrations of carbamide peroxide, ranging from 10 to 16%, and hydrogen peroxide, ranging from 7.5 to 9.5% [1,3-9]. Long-term or high-temperature storage and faulty packaging, among other problems, can cause bleaching gels to lose potency [10]. The penetration of hydrogen peroxide is enhanced by increasing the residence time of the product on the tooth surface, and, after 45 minutes, products significantly reduce the concentration of hydrogen peroxide [11]. Some manufacturers recommend that bleaching gels should be stored within a maintenance temperature range, which may vary by a few degrees according to specifications described in the package insert. When this fact is not considered, it may lead to a faster degradation of bleaching agents and a change in the pH of the active agent both of in-office and at-home bleaching products [12].

A previous study [12] evaluated whether the actual concentration of bleaching agents available in four different countries was the same as the label indicated and within the recommendations of the International Standard on tooth whitening. All products in the United States and China were within the recommendations of the International Standard when products were tested immediately upon delivery at testing sites. One product in Saudi Arabia and three products in Brazil had greater than 30% concentration loss [13]. There is a specific requirement that tooth bleaching products must have their concentration and expiration date indicated on the label, and that the actual concentration of the active ingredient should not exceed 10% or be less than 30% of the concentration indicated by the manufacturer on the useful life of the product [14]. In an analysis of the concentration of 16% carbamide peroxide-based products prepared at different compounding pharmacies and of a commercial bleaching product, only the commercial bleaching product and one of the compound products showed the best mean concentration values, close to 16% [15].

The samples consisted of commercially manufactured and compounded tooth whitening gels of different brands and at different concentrations. Tested materials were presented at (Table 1). Commercial bleaching products were purchased from dental supply houses in Brazil, and we chose products that can be easily found by and are readily available to dental practitioners. Compound products were prepared in a dispensing pharmacy accredited by the University were the study was performed. Commercial bleaching agents were analyzed in the first three months after manufacturing, and compound products were analyzed in the first week after preparation. 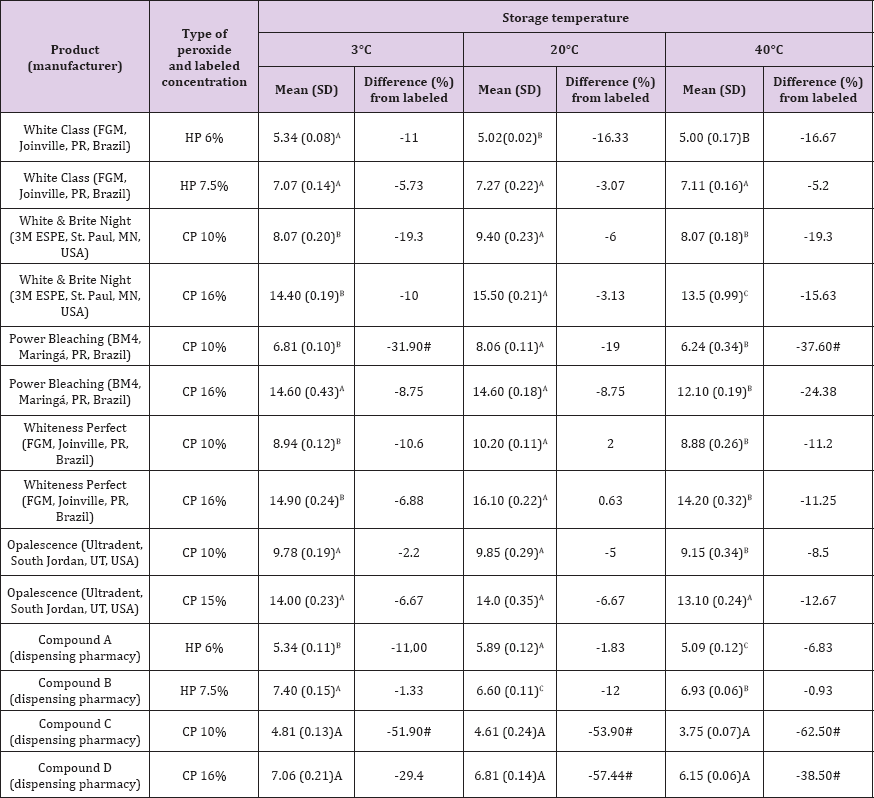 The method recommended for assaying peroxide by the United States Pharmacopeia [18] and International Standard [14] was used to determine the amount of peroxide in the bleaching agents. The specific steps taken in the present chemical analysis have been used previously in several studies [10,13,19-22]. All products were stored at room temperature upon arrival at the university and maintained in separate groups until analysis. Each bleaching agent was analysed in all the temperatures: room temperature (20°C), warm (40°C) and cool (3°C). Storage temperatures were simulated by heating at 40°C in a microbiological incubator; and cooling at 3°C in a refrigerator; both storages were maintained for 8 days. The peroxide concentration was determined by iodometric titration using sodium thiosulfate as titrant. The data analysis of the curve obtained using this method showed small variations in concentration during the test period, accounting for the actual error of the method, which is of approximately 0.1%. It was considered that by day 8 there was a significant reduction in the peroxide concentration of the sample, with no significant reduction thereafter.

Initially, an empty test tube of 250mL was weighed on an analytical balance (Bioprecisa, Curitiba, PR, Brazil) accurate to four decimal places. Approximately 0.2500g of the tooth whitening product was placed in the empty test tube, which was weighed again. The weight of the sample was calculated by subtracting the weight of the empty test tube from that of the tube containing the sample. The balance was tared before each measurement. Deionized water was added up to the 100-mL mark on the tube. A stir bar was placed in the tube, and the sample was stirred using a magnetic stirrer (Fisatom, Sao Paulo, SP, Brazil) until a homogeneous solution was obtained. Then, 20 mL of glacial acetic acid were added to the solution. Approximately 2g of potassium iodide were added to the solution and allowed to dissolve, which turned the color of the solution to a light shade of yellow. Three drops of ammonium molybdate were added, and the solution was allowed to stand until it became homogeneous again. The tube was then covered with a dark hood for at least 10 minutes to allow the chemicals to fully associate, accompanied by a color change in the solution, thus ensuring complete reaction with the available peroxide.

Gradually, 0.025 N of sodium thiosulfate were titrated into the solution using a 50-mL burette until the color of the sample changed to pale yellow. Then, 3 mL of a 1.0% starch indicator were added to the solution, which turned the color of the solution to dark purple. More sodium thiosulfate was titrated into the solution using a 50mL burette until the solution turned colorless, which was the end point of the assay. Sodium thiosulfate was essential for the chemical analysis because it determined the concentration and quality of the analysis. The color changes that occurred throughout the chemical analysis were the result of the steps of the assay, thus indicating complete reaction with the available peroxides. The concentration of the bleaching agent was determined by the following formulas: Carbamide Peroxide (CP)% = 4.704 x STmL x (0.025/PWg) and Hydrogen peroxide (HP)% = 1.704 X TSml X (0.025/PWg).

Each measure was repeated eight times and the mean value and standard deviation was calculated to each bleaching agent. Analysis of variance (ANOVA) followed by Tukey post-hoc test was used to compare group means at the different storage temperatures at 1% significance level.

Esthetics has been a topic of interest since the beginning of civilization [22]. Over the years, patients are increasingly asking for tooth whitening. It is well known and accepted that the effectiveness of bleaching agents is dependent on the contact time between the agent and tooth surface and on the peroxide concentration [13]. The actual concentration of bleaching agents compared to the labeled concentration has been investigated by several authors [1,13,15,17,19-23]. who have shown results for the concentration of the active agent different from those specified by the manufacturers. These findings are consistent with the present study, in which the concentration of the active agent was statistically different when the products were compared to each other at the three storage temperatures, which may render products less clinically effective than expected, thus probably failing to achieve an effective clinical outcome. The Clinical Research Associates [10] have stated that "storage for extended time or in warm temperature, faulty packaging, and other problems can cause bleaches to lose potency."

In agreement with this statement, of 14 products tested in the present study, 13 showed statistically significant differences in concentration (p < 0.001) when compared to each other at three storage temperatures (room, warm, and cold). Only White Class 7.5% hydrogen peroxide had no statistically significant difference in concentration (p = 0.079), showing that the variation in temperature affected the stability of the concentration of the peroxides tested, and heat induced a greater difference in concentration in most products analyzed. Similar to the studies of Matis et al [13]. and Clinical Research Associates [10] the changes in peroxide concentration may be attributed to storage, warm temperatures, faulty packaging, and transportation, among other problems. Since this variation exists, the dentist's and the patient's experience are negatively affected both in quality and safety. According to the requirements of the International Standard [14] tooth bleaching products must have the percentage of concentration and expiration date indicated on the label, and the actual concentration of the active ingredient should not be above 10% or below 30% of the concentration indicated by the manufacturer.

Further studies are warranted to investigate the quality of thickeners or even stabilizers used in compounded peroxides. Customers have no way to find out the actual concentration of the active agent in these products, or even in commercial beaching products. Patients only have access to the information provided in the package insert and believe that the product will remain stable during storage. Differences from the labeled concentration may occur during the manufacturing, transportation or storage of tooth whitening products, leading to a faster degradation of bleaching agents [13]. In the present study, products Power Bleaching 16% carbamide peroxide, Opalescence 10% carbamide peroxide, and Opalescence 15% carbamide peroxide, in relation to storage temperatures, did not differ from each other at room and cold temperatures, but were statistically different from warm- stored products (p<0.001), indicating that heat influences the maintenance of the peroxide concentration. In Brazil, the climate is extremely tropical, with very hot as well as very cold seasons, depending on the climate in each state.

Thus, industries and distributors should review their logistics for the delivery of tooth whitening products, which should be handled as drugs, in the same way as vaccines, to avoid the risk of affecting their clinical performance. The efficacy and safety of bleaching agents have been demonstrated in different studies [1,3-9]However, for greater efficacy and safety, tooth whitening products should be inspected by the manufacturers themselves, from transportation to storage, because temperature variation, as described in the present study, may have an effect on the peroxidec concentration, leading to a faster degradation of active agents. Thus, given the lack of studies assessing the influence of thermal changes at three different storage temperatures (room, warm, and cold) on the concentration of peroxides, the present results are of great importance.

Temperature variation affected the concentration of the peroxides in this study. The tested products showed different results for the concentration of the active agent when compared to each other at three storage temperatures (room, warm, and cold). None of the tested bleaching agents match the labeled peroxide concentration, especially those based on carbamide peroxide from dispensing pharmacy that has differences less than 30% from labeled, failing to meet the requirements of the International Standard for products for external tooth bleaching.