A comparative survey of stiffness fixation of bone fragments and blood supply to regenerate in two groups of adult patients with closed fractures of the shoulder (35 pers.) and fractures of the tibia (35 pers.) in terms of treatment by Ilizarov. Found that when a shoulder injury significantly lower functional load carried by the limb and 3 times higher than recorded by a load cell micromotion bone fragments when dosed loading segment of the limb. At the turn of the humerus faster and increases blood flow in normal vessels regenerate bone.

On the basis of information about the regeneration of the broken bones of front and back extremities experimental zoons a priori had opinion of absence of principle differences in the regeneration of the broken bones of overhead and lower extremities for people. Ilizarov at treatment of patients with the closed breaks of both humeral bone and bones of shin recommended to adhere to the identical optimum terms of fixing - 54 days [1]. Not taken into account thus, that lower extremities, unlike overhead. The feature of the functional state of patients at treatment of break of humeral bone is falling of capacity at the maintainance of lokomotornoy activity. The closeness of proksimal'noy part of shoulder to the corps and necessity of maintainance of motions in an elbow joint do impossible using for treatment of break of humeral bone of typical set of circular supports of vehicle of Ilizarova, in-use at treatment of sick with breaks bones of shin [2]. For the union of breaks of bones a large value is had feature of their providing with blood, more intensive on a shoulder [3-6]. The purpose of the real research was comparison of capacity for the static functional ladening of shoulder and shin, and also inflexibility of fixing of bone fragments and providing with blood of regenerate at treatment on Ilizarov of the closed diafizarnykh breaks of bones of these segments of extremities.

A volume and Research Methods

Inspected 2 groups of patients. First made 35 patients with the closed diafiz breaks of humeral bone in the conditions of treatment on the method of Ilizarov. Age of patients from 26 to 66 years (40±3), women - 10 brows., term of fixing in the moment of inspection from 3 to 94 days (22±6). The second group was made by 35 patients of mature age with the closed diafiz breaks of bones of shin in the conditions of treatment on the method of Ilizarov. For all patients micromobility of fragments of humeral or shinbones was determined at the axial ladening of the proper extremity dosed, step increasing for 5 kG [7]. Thus by tenzometric statio and voltmeter of B7-73/1 a signal, allowing at a count to define the change of distance between spokes, going out from a bone higher and below than area of break, was registered. In addition, by a sensor with bearing frequency 8 Mhz of computer-controlled diagnostic complex «Angiodin-2UK» production amalgamation of «BIOSS» (Russia) speed of blood stream was registered in the area of break on the surface of tibia or on the outward surface of humeral bone at the step increasing functional ladening of shin or shoulder (Figure 1). Statistical treatment of results of researches was conducted by the package of analysis of data of Microsoft ExSel-2010. For the estimation of authenticity of distinctions of results used the t-criterion of St'yudent. Applied the methods of cross-correlation and regressive analysis.

The Most substantial differences in the indexes of two groups of patients are exposed at the estimation of the functional loading on extremity. If able to carry most sick with a break bones of shin on the damaged extremity mass of body, for patients with the break of shoulder the maximal loading was 15,9±1,3 kG and accompanied appearance of the pain feelings. Micromotion of bone fragments in the period of fixing for the patients of 1th and 2th groups changed identically, increasing in the first two weeks after osteosintezis because of rezorbtion of ends of fragments. At the breaks of shoulder in the first 2 weeks it made 219±39 mkm/10 kG., at the breaks of tibia of 71±18 mkm/10 kG. In a subsequent period of treatment mikropomotions of bone fragments in both groups steadily went down because of kompaktizations of bone regenerate (Figure 2). To one of reasons of distinctions in reologic properties of bone regenerate for patients at the beginning of period of fixing there could be features of construction of vehicle of Ilizarov at treatment of traumas of shoulder (not rings, but semi-supports, are used in overhead and lower third of shoulder).

Figure 1: Axial functional ladening of shoulder and shin in the period of treatment of patients on Ilizarov with determination of change of distance between spokes and registration of speed of blood stream. 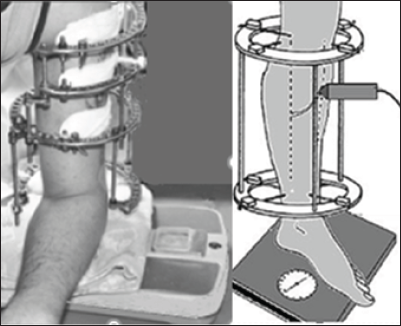 Figure 2: Dynamics of mikromobility of bone fragments at treatment of patients with the breaks of humeral and tibia bone.

Figure 3: A dynamics of speed of blood stream is in the vessels of bone regenerats of shoulder and tibia. 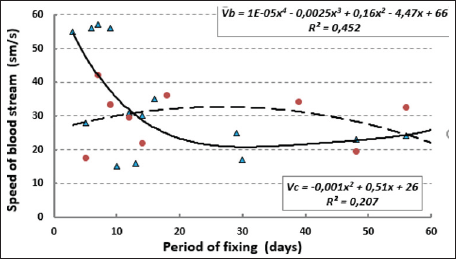 During the leadthrough of test with an increasing axleloading on a shoulder speed of blood stream in arteries began to go down. Under reaching loading of 15 kG there was a temporal increase of index, related to the decline of intramural pressure in the wall of arteries and diminishing of vascular resistance (Figure 4). The further increase of pressure resulted in the rapid decline of speed of blood stream because of the mechanical ceiling of vascular riverbed and appearance of the pain feelings. The same dynamics of change speed of blood stream was observed and at the increase of loading on a shin. It is known that for the vessels of shin in a pose upright characteristically more high blood pressure (action of additional hydrostatical pressure the size of which exceeds 70 mm of rt.st.). During the leadthrough of research in a pose upright patients with the increase of the functional loading on extremity had a decline of speed.

Figure 4: Dynamics of speed of blood stream in regenerate of brachia and tibia at the increase of the functional loading on extremity. 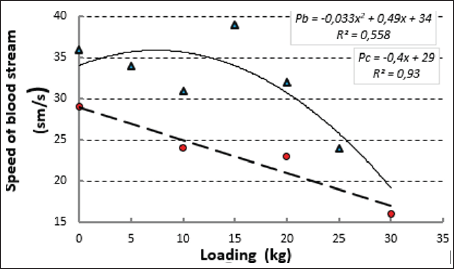 On a background the steady decline of speed of blood stream under reaching loading of 20 kG the relative increase of index is exposed. It allows to draw conclusion that the vessels of bone regenerate of shin are better protected from the action of loading enclosed from outside. This defence is determined more high values of hydrostatical pressure and, presumably, by the morphological features of bone regenerate. Thus, the existent difference of functional destiny of overhead and lower extremities for people lays on the imprint on their state in the period of treatment of breaks of bones. Even in the conditions of application of method of Ilizarov there is ability to carry the functional loading at a shoulder less than in 2-3 times below, than at a shin. In the period of treatment of humeral bone considerably anymore pliability of bone regenerate during the leadthrough of test with the functional loading. Speed of blood stream after the break of shoulder.