Objective: Among more than 40 mutations identified in the BRAF gene, the BRAF T1799A (V600E) point mutation is the most common and accounts for more than 90% of all the mutations found in the BRAF gene. It has been found to occur frequently in thyroid cancer. While some reports suggest the BRAF V600E mutation is associated with poor prognosis and recurrence or iodine uptake resistance, this remains a controversial issue. The aim of study was to: 1) determine the status of BRAF mutation in differentiated thyroid cancer in Bach Mai hospital; 2) evaluate the association of the BRAF mutation with clinicopathological parameters.

Thyroid cancer shows the fastest rising incidence among all major human cancers, currently with 44,670 new cases in the United State. Differentiated thyroid cancer is the most common cancer of the endocrine system and the papillary thyroid cancer is the most common type, followed by follicular thyroid carcinoma. In recent decades, the incidence of this type of cancer has increased in Vietnam. According to GLOBOCAN 2012, the prevalence rate is 2.5/100000 people, mortality rate is 1.3/100000 people per year. Most thyroid cancers generally have a good prognosis after appropriate treatment including surgical procedure and radioiodine therapy [1]. However, the recurrence rate of differentiated thyroid cancer increased up to 30%, and the cancer death rate was 8% after initial treatment at 30 years of follow-up. Studies in the world have shown that the primary cause of recurrence and metastasis in patients treated radioiodine therapy are low absorption and poor iodine intake (Table 1) [1,4].

Comment: Of the 198 patients participated in the study, there were 172 women and 26 men, with an average age of 45.1 years old, in which patients aged 45 years or older accounted for a higher proportion (51.5%) Most patients (189/198 - 95.4%) underwent primary tumor resection and histopathological examination with tissue samples taken from surgery. The primary sampling site was thyroid gland which accounted for 85.4%, 1.5% of sampling site was (3 patients) from distant metastatic tissue.

Activation of MAPK pathway by BRAF V600E was believed to play a dominant role in the development and progression of thyroid cancer[2]. Effectors of MAPK signaling pathway representing an early molecular event in papillary thyroid cancer regulate several genes related to cell proliferation, differential and survival. Gene expression analyses using DNA microarrays showed that different transcriptional profiles were associated with BRAF, RET/PTC and RAS mutation groups in human papillary thyroid cancer [10]. The differential expression profiles between these genetic alternations may explain why BRAF mutation has more close correlations with poor clinicopathological features compared with RET/PTC and RAS mutation[3]. The mutant BRAF can stimulate constitutive signaling which bypasses the need for extracellular growth factors. Subsequently phosphorylation of downstream MER1/2 and ERK1/2 leads to the expression of a few specific genes involved in cell proliferation, differential, survival, tumorigenesis, and even the microenvironment promoting the process of epithelial- mesenchymal transition [3-4].

Retrospective study on 198 patients who had been diagnosed with thyroid cancer at The Nuclear Medicine and Oncology Center of Bach Mai Hospital, from November 2015 to March 2017. Informed consent for the evaluation of BRAF V600E mutation was obtained from all patients (Table 2). 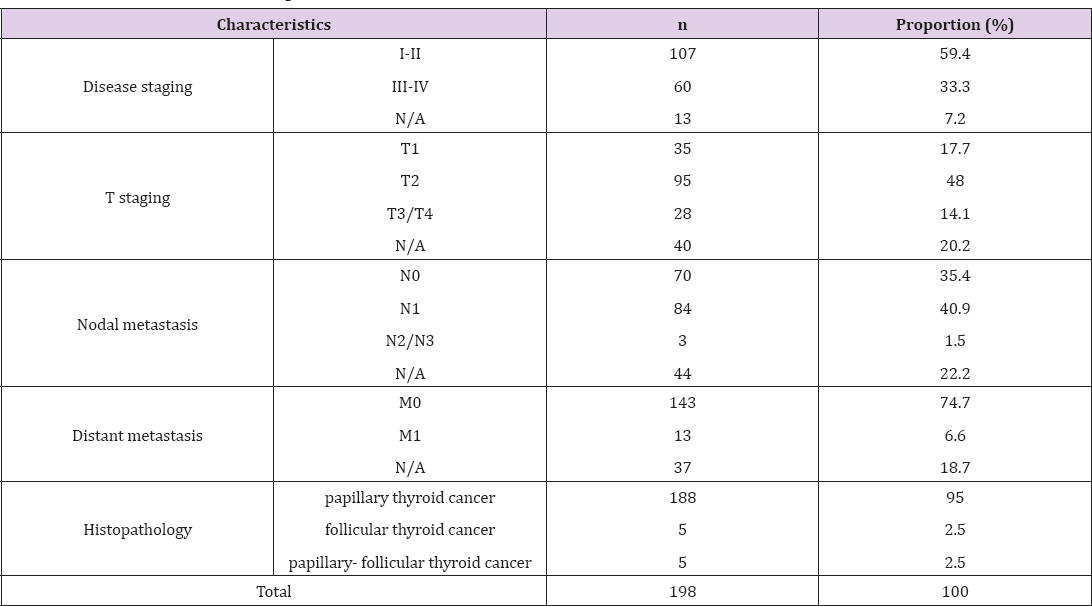 We performed the BRAF V600E mutation analysis on paraffin embedded sections of primary tumors obtained after thyroidectomy. Genomic DNA was extracted from 10|im thick sections of formalin-fixed paraffin embedded tumor tissue blocks using the QiAamp DNA FFPE tissue kit (Qiagen, USA). The concentration and purity of the extracted DNA were determined by a Qubit 2.0 spectrophotometer (Thermo Fisher Scientific, USA). The extracted DNA was stocked at -20°C until further use. The assays for the detection of the BRAFV600E mutation were performed using the BRAF 600/601 StripAssay® (ViennaLab, Austria). All reactions were done in 20-^Lvolumes using template DNA, and PCR master mix. All needed reagents were included with the kit. The PCR reaction of was performed using a Mastercycler (Eppendrod, USA). PCR cycling conditions were a 10 min hold at 37°C followed by 35 cycles of 94°C for 60sec, 70°C for 50sec, 56°C for 50sec, 60°C for 60sec, and 60°C for 3min (Tables 3 & 4). The PCR products were hybridized with streptavidin-alkaline phosphatase specific probe and results analysis. Data is processed by SPSS 15.0 software [7]. 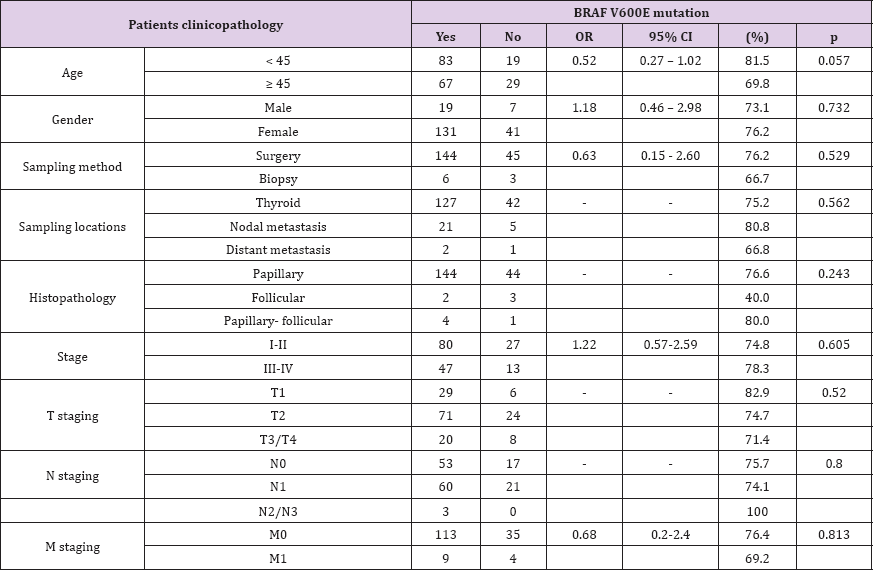 The Status of BRAF Mutation

This similarity suggests that papillary form remains a common histopathology of thyroid cancer. The results of many international researches reported the wide range of BRAF mutations frequency which was from 39% to 84%. The frequency of BRAF mutation in our study was 75.8% and all mutations were detected as V600E which like the results of Kim SJ et al. (2012) in Korean patients (71%). In addition, our results showed the high rate of BRAF mutation in the group of under 45 years (81.4%), which is 12% higher in comparision with the group of over 45 years old. BRAF mutations were more common in women than in men with a mutation rate of 73.1% and 76.2%, respectively. In our study, the BRAF mutations occurred more frequently in patients with papillary and follicular- derived papillary form with mutation rates of 76.60% and 80%, respectively. Patients with disease progression stage (III / IV) had a 4% higher of BRAF mutation rate in comparison with early stage patients (I/II). Regarding the T staging, nodal metastasis and distant metastasis, there was 8-11% difference between T1 stage and other T staging; 100% of patients with 2 or 3 nodal metastases had BRAF mutation. The rate of BRAF mutations in non-metastatic patients was 76.4% and was 5% higher than in patients with distant metastases. In term of sampling method, our results demonstrated that he detection rate of mutations in surgical specimens was 76.19%, 10% higher than that of biopsy specimens.

For the sampling site, the specimen collected at the nodal metastasis had the highest BRAF mutation rate (80.8%), followed by thyroid site and distant metastatic with mutation rate of 75.2% and 66.7%, respectively. Although our study found a difference in BRAF mutations in every clinical characteristic, but the results of the x 2 test showed no significant difference (p> 0.05). These results suggest that there is no significantly association between BRAF mutations and some specific clinical characteristics such as age, sex, stage of disease, histopathological result, sampling sites and sampling methods, which are in accordance with other similar sample sizes research in the world. However, other studies performed on larger sample sizes, resulting in contradictory findings. This difference may be due to insufficient sample sizes and limited follow-up. Therefore, the implementation of future studies with larger sample sizes is critical to assess the prognosis of BRAF mutations in thyroid cancer patients. In addition, our study reported that the sampling site and sampling method did not have any statistically significant association with BRAF mutation (p> 0.05). This result has once again confirmed that the BRAF V600E mutation are unaffected by the sampling method and site.

Of the 198 thyroid patients in our study:

b) BRAF mutation does not depend on age, gender, sampling methods, sampling sites, histopathological features, the stage of disease, T staging, Nodal metastasis and Distant metastasis.

c) The implementation of future studies with larger sample sizes is critical to assess the prognostic potential of BRAF mutations in thyroid cancer patients.