Although a well-studied joint disease in dogs, hip dysplasia (HD) in cats is a relatively neglected condition. There remains some controversy as to the clinical manifestations and incidence of hip dysplasia in domestic cats. The clinical manifestations in cats differ from those in dogs - the literature indicates that the main clinical signs are reluctance/ difficulty jumping. There is, therefore, great interest in identification of clinical signs to allow early diagnosis and treatment to avoid chronic problems. As in dogs, definitive diagnosis in cats is by radiographic examination. The aim of this study was to evaluate the incidence of hip dysplasia in adult cats using radiographic examination and to correlate radiographic findings with Norberg Angle. Eighty - six cats over one year old were evaluated in which the Norberg angle, articular and morphological alterations were evaluated. Thirty-five (35/86) cats showed some sign of discomfort during physical examination. Nine owners (9/56) of the incongruent cats reported some behavioral changes during anamnesis. The results of this study suggest that there is a high incidence of feline hip dysplasia in this study and the Norberg Angle should be used in conjunction with other findings in the diagnosis of hip dysplasia.

Great advances have been made in feline medicine in the last twenty years. As a consequence of better care and early recognition of illness by owners, cats are now more healthy and are living longer [1] . Joint diseases have been widely studied in dogs, but less so in cats [2], because it was thought feline arthroses were rare [3]. Joint disease is now more often diagnosed in cats [4,5] and is thought to be responsible for chronic pain in many untreated cats [6], directly altering their quality of life [2]. Although the general principles of orthopedics are the same for any species, the anatomy, function [1] and behavior of cats does differ from that in dogs [3]. Hip dysplasia is the abnormal fit of the acetabulum and femoral head, and is usually bilateral. It starts with varying degrees of looseness of the surrounding soft tissues, articular instability, and deformities of the femoral head, neck and acetabulum that result in osteoarthritis [7]. In cats it was first described in Maine Coones but is also reported in Persian and exotic breeds [8]. In a study including a variety of different breeds, an incidence 6.66% of hip dysplasia (HD) was reported [9].

It is likely that this low incidence of HD in cats compared to dogs is a real finding based on the fact that it is often diagnosed incidentally on radiographic examination [1,10]. The low incidence in this species may be associated with its small and varied genetic heritage [1]. However, higher incidences of HD were observed by [11] and Medeiros Junior et al. [12] who reported incidences 32% and 40%, respectively. Clarke and Bennet in 2006 also reported that HD represents 22% of cases of pelvis osteoarthritis in cats. In cats, HD is usually mild and bilateral, and there are fewer radiographic signs of degenerative joint disease than in dogs [11]. Clarke and Bennett [4] reported that the hip osteoarthritis is common in cats, affecting 48% of dysplastic animals; although in most cases there were no clinical signs of HD. There is no sex predisposition for the condition [12] and pure breeds are predisposed [1]. HD may be a cause of pain and reduced activity [13]. Since cats often mask pain and clinical signs by adjusting their lifestyle, owners may miss behavioral changes associated with HD [1] or dismiss clinical signs as ageing changes [14].

Capsular thickening, synovial effusion, crepitus, and decreased range of motion are unusual findings during clinical examination in cats with HD [4,14]. The main clinical finding is lameness, and this may not be present in all cases. Pain can be difficult to assess in cats, since most do not tolerate manipulation well, making interpretation of joint manipulation difficult [4,14]. In addition, cats rarely vocalize in response to pain, typically showing behavioral manifestations of pain [13]. Parameters such as heart and respiratory rates are poor indicators of pain in cats [14]. Cats with chronic pain tend to show nonspecific changes such as reduced activity, changes in urination (loss of litter box training, etc.), reduced grooming, aggressiveness and / or become withdrawn [14,15]. Due to the uncooperative nature of cats and their reluctance to roam freely in a strange environment (favoring hiding in corners or under furniture), clinical assessment of gait is difficult [1]. Often history is essential in identification of gait changes in cats [1,5].

The owner plays a vital role in the diagnosis, since cats with HD may show only reduced activity and behavioral changes [3,5,16]. Therefore, owners of adult and geriatric cats should be encouraged to complete an annual clinical questionnaire to identify chronic pain or behavior changes so that early recognition of change is possible [3].Unfortunately, due to the free roaming lifestyle of most domestic cats, an accurate history is not always available [1]. It may be helpful to request videos of the cat in its natural environment for assessment [1].Diagnosis of HD should be based on radiographic examination [5,7] since signs of hip dysplasia may be absent from anamnesis and clinical examination [8]. In order to obtain diagnostic radiographs sedation is required for proper positioning [7]. The standard radiographic projection for evaluation of hips is a ventrodorsal pelvis with the femurs extended parallel to one another and to the spine, with medial rotation so that the patellae overlie the trochlear grooves [7]. In dogs, the minimum age for radiogaphic examination for diagnosis of HD is 24 months [7,17] and the severity of disease is assessed by morphologic evaluation of joint structures, degree of degenerative joint disease and measurement of the Norberg angle.

The Norberg angle is the angle formed by a line connecting the centers of both femoral heads and one drawn between the center of a femoral head and the craniodorsal rim of the acetabulum on the same side [17]. In some cats this index is not a useful measure of whether an animal will develop hip incongruence. Clarke and Bennett recorded Norberg angles of 87.6 degrees in dysplastic cats compared to 99.2 degrees in cats with normal hip joints. Radiographic signs common to all species are shallow acetabulae, incongruity between the femoral head and acetabulum with varying degrees of dislocation, deformation of the femoral head and neck and signs of arthrosis in chronic cases [18]. Patsikas et al. [19] noticed dislocation or subluxation of the hip joint; insufficient development of the craniolateral acetabular edges; deformation of the contours of the subchondral bone of the acetabulum; shallow acetabulum and secondary degenerative changes in the femoral head and neck in cats with HD.

Eighty-six cats were recruited during routine visits to the University State North Parana in Veterinary Hospital in the period from January 2011 to January 2012 inclusion in this study. All were over 1 year old, and there was no sex bias. Criteria for exclusion were pregnancy or lactation, history of trauma or presence of contra-indications for sedation. After informed consent, the owners were interviewed, and clinical and orthopedic examinations performed on the cats to assess pain, range of motion and tenderness. Ventrodorsal radiographic projections of both hip joints were made under anaesthetic with propofol, with the hind limbs extended and slightly rotated medially, according to OFA (Orthopedic Foundation for Animals) guidelines. Norberg angle, articular changes and morphology were tabulated and correlated. To assess the Norberg Angle a template with circles of varying diameter was superimposed on the radiographs to determine the center of each femoral head. Then a line was traced through the centers of the femoral heads. The center of each femoral head was connected to the cranial-dorsal rim of the acetabulum and the angle made by on the medial side by the intersection of the 2 lines was the Norberg Angle.

Variables were normally distributed using Kolmogorov- Smirnov test (p> 0.05). Different degrees of acetabular coverage and congruency were analyzed by Tukey's test Analysis of variance was used to correlate Norberg angle with the degree of coverage of the femoral head (p <0.05).Thirty-five (35/86) cats showed some sign of discomfort during physical examination. Nine owners (9/56) of the incongruent cats reported some behavioral changes during anamnesis. Results were independent of sex and body condition (p> 0.05). Data shown in Table 1. The incidence of articular disease found in this study (56/86) was significantly higher than a previous study which only reported an incidence of 6.6 % [10]. This suggests that HD has probably been underestimated or misdiagnosed previously. Medeiros Junior. (2007) found an incidence of 40% dysplastic cats in their study. Milken [20], found Norberg angles varying from 89.75° to 93.02° in dysplastic cats, which is in accordance with findings of Langenbach et al. [21] who found Norberg angles varying from 84°±10° to 95°±5°.

Table 1: Effect of congruency, sex, body condition and correlation of the acetabular edge with Norberg angle in 86 cats. 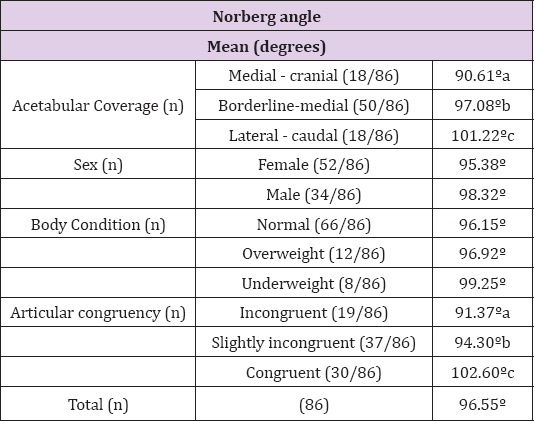 In our study the mean Norberg angle for poor to borderline femoral head coverage cats were 90.6° and 97.8° respectively, demonstrating that higher angles may be found in poorly covered femoral heads in cats. For those animals with signs of incongruity, mean Norberg angles varied from 91.37° to 94.30°. For those cats with perfect congruence between femoral head and acetabulum, the mean Norberg angle was 102.6°, very different from the bigger Norberg angle found in those mildly incongruent cats. This suggests that the Norberg angle may not be a very reliable tool to predict hip incongruence. As in dogs, there was no influence (p> 0.05) of sex on the studied parameters, corroborating findings of Keeler et al. [22] Few animals in the study showed any discomfort during physical examination (35/86) in contrast to the number of animals with hip incongruence (56/86) or poor femoral head coverage (68/86). One explanation for this is that the cats may have been anxious when they were examined in the hospital [1]. It is common for cats to show behavioral changes, such as reduced activity, due to chronic pain. In our study,

however, only a few owners of incongruent animals (9/56) reported any behavioral changes. It is possible that owners had failed to notice changes due to the lifestyle of their cats or that hip incongruence does not produce severe pain in most dysplastic cats. Although some authors suggest that inability or unwillingness to jump is common in dysplastic cats none of the cats with articular incongruity in our study had any reluctance to jump, climb on furniture or use a litter box.

The results of this study suggest that there is a high incidence of feline HD in Brazil, contradicting previous reports in the literature, and that the Norberg Angle should it only be used in conjunction with other findings in the diagnosis of HD. More studies are required to further define feline HD.