Literature shows that force variability increases when force levels increase. However, this constant increase occurs only to a certain point (e.g., at around 50% of maximum voluntary contraction (MVC) and 80% MVC). After this point, the increase of force variability either slows [1,2] or stops [3-5]. The potential underlying mechanism accounting for the changing rate of increase in force variability is discussed in this brief review. It concludes that among several factors, motor-unit recruitment appears to be the most important factor in determining the relationship between force and force variability although both motor unit discharge rate variability and synchronization have a significant impact on force variability as well.

Force variability has been observed across many studies where people attempt to produce a target level of force [1,3-10]. Recently, Christou et al. [1] examined participants performing an isometric leg extension and found that force variability increased almost linearly as the level of force increased up to 60% MVC. After this point, force variability continued to increase, but at a much slower rate. Similar findings were also reported in a study with an isometric hand-grip tasks [10], and in a study with isometric abduction of the first dorsal interosseous muscle [2].

Force variability and its outcome has traditionally been viewed as a by-product of perceptual-motor noise imposed on a deterministic signal [3,11-13]. However, a study by Slifkin & Newell [9] indicated that the variability of motor responses might not be caused by the perceptual- motor noise. In their study [9], participants were required to maintain isometric force for extended periods of time at different levels of maximum voluntary contraction.They found that force variability increased exponentially as a function of force level. However, the signal-to-noise ratio, as well as measures of noise in both the time (approximate entropy) and frequency (power spectrum) domains, changed according to an inverted U-shaped function over the range of force levels. Based on this finding, Slifkin & Newell [9] claimed that force variability was not directly related to perceptual- motor noise. Instead, in a separate but related study, Slifkin & Newell [10] hypothesized that motor-unit recruitment (MUR) and discharge rate (DR) might play a role in the relationship between force and force variability. Their proposal seems to be supported by the findings from both empirical [2,14] and computer simulation studies [15-16]. In addition, previous research [15-17] has also reported a significant effect of motor-unit synchronization (MUS, a measure of the correlated discharge of action potentials among motor units) on force variability .

A motor unit is defined as a motor neuron and all muscle fibers innervated by the neuron. It has been known for decades that muscle force is gradated by two mechanisms, namely MUR and DR [17,18]. Several studies have found that MUR is completed at about 40% of the MVC for small muscle groups such as hand muscles or at about 80% of the MVC for large muscle groups [19,20]. It is interesting to note that the maximum force variability (e.g., represented by the standard deviation of force productions at each estimated force levels) observed in Moritz et al. [2] study and Christou et al.[1] study were at approximately 50% and 70% MVR, respectively, which were close to the range at which MUR is completed in small and large muscles. Putting together, the relationship between muscle force and its variability could be directly related to the behavior of motor units. Therefore, studies on the effect of MUR and DR on force and its variability are important to be highlighted, and the purpose of this article is to provide a comprehensive review on the role of MUR and DR in affecting the relationship between force and its variability.

A computer simulation study by Yao [15] is one of the few studies that have focused on examining the role of MUC and DR in determining the relationship between muscle force and its variability. In the study [15], 10 levels of the maximum force (MVC) were simulated, ranging from 10 to 100% of MVC. There were two recruitment conditions, one condition (40%MUR) recruited all motor units at 40% of the MVC level, and the other (50%MUR) recruited all motor units at 50% of the MVC, this allowed the 40%MUR condition to have a greater number of motor units than the 50%MUR group before the level of the simulated force reached 50% of the MVC. Similar to the empirical findings of Moritz et al.[2] , Yao's [15] simulation also found that force variability increased at a faster rate at low force levels (i.e., from 10 to 50% of MVC), whereas after this point (i.e., from 50 to 100% of MVC), the rate of increasing variability coinciding with increased force was greatly reduced (Figure 1A). It should be noted that 50% of MVC in the simulation was the point where the MUR completed in one of the two conditions. Although Moritz et al. [2] did not measure the whole motor unit pool and could not know exactly where the completion of MUR occurred in their study, the completion of MUR most likely happened around the point (i.e., approximately 50% of the MVC) where the increasing rate of the variability slowed down according to previous research [20]. The findings from the two studies [2,15] indicate that the initial fast rate of increase in force variability at low force levels (i.e., before 50% MOV) could be due to the increase of the number of motor units recruited.

However, it is premature to claim that MUR is more important than the DR in determining the relationship of force and its variability because both the number of MUR and DR change at lower force levels. The superiority of MUR in determining the relationship is revealed when comparing the results of the variability and force in the two simulated conditions (i.e., 40%MUR group and 50%MUR group). In the simulation study [15], the 40%MUR group showed consistently greater DR than the 50%MUR group (Figure 1B). However, the 40%MUR group had a greater force variability than the 50%MUR before, but not after, the completion of the MUR. Recall that the 40%MUR group had more motor units recruited than the 50%MUR group before the completion of MUR. This result indicates that MUR is a more important factor in determining the relationship between force and force variability. It should be noted, however, that this finding does not mean that DR has no impact on force variability. When coefficient of variation (CV) for discharge rate and force variability were measured and examined, previous studies [2,10] showed that CV for discharge rate plays a significant role in determining the CV for force. In addition, in a study of young and elderly force control [21], it was found that older adults had greater force fluctuations which are associated with greater relative power than young adults. They [21] attributed this difference in force control and relative power between the two groups to greater discharge rate variability of motor units in older adults. Previous studies [2,14,22] have consistently showed that older adults exhibit greater discharge rate variability compared with young adults during a variety of motor tasks. In summary, DR also has significant effect on force fluctuations. 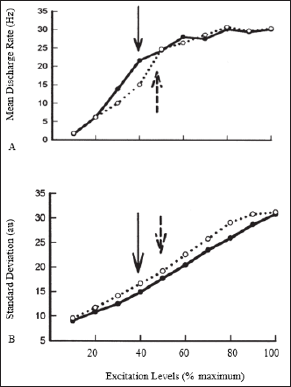 Early studies have observed that weight lifters have a greater MUS index than skill- trained individual [23,24], and strength training resulted in increases of both muscle force and MUS [23]. These findings are interpreted as strong evidence to suggest that MUS is a contributing factor for the training-induced increase of muscle force. However, a recent computer simulation study [16] along with other experimental studies [25,26] suggest that motor unit synchronization does not play a role in maximal muscle force. Instead, MUS is reported to have a significant effect on force fluctuations [15-17,26]. To this extent, a study [16] with simulated isometric contractions of a hand muscle found that force variability increased when MUS index increased. It is interesting to note that, in a separate but related simulation study [15], it was found that different levels of MUS between two simulated groups at high force levels (i.e., from 50% to 100% of MVC) did not result in differences in force variability between the two groups. Based on the findings from the two studies [15,16], it is assumed that MUS has an effect on force variability, but its effect is not as significant as the effect of MUR.