The advantage of the Evans, OA / ASIF and OTA classifications, compared to other classification systems, is to distinguish between pertrochanteric and intertrochanteric fractures. These are characterized by their epidemiological peculiarities, difficult reductions and by their rather high complication rates. The aim of the authors is to review the difficulties and complications encountered in a study of 14 cases in order to distinguish this entity, which is frequently considered to be a pertrochanteric fracture. 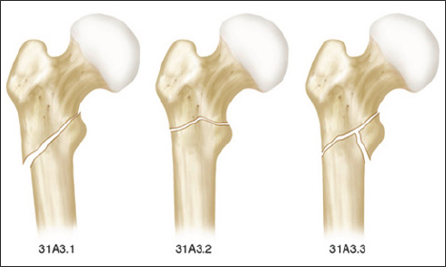 The aim of this study is to evaluate the clinical and radiological results of intertrochanteric fractures (31A3) treated with conventional gamma nails. The prospective study focused on 14 patients with closed intertrochanteric fractures classified as AO 31A3 in the Traumatology-Orthopedics department of the Moulay Ismail Military Hospital in Meknes over a period of 5 years, between January 2012 and November 2016. The methods of study were based on the exploitation of medical records.

Closed intertrochanteric fracture classified as AO 31A3. The study is based on epidemiological, clinical, radiological, therapeutic and functional results analysis. The operation was performed on the orthopedic table in the supine position using Zimmer ancillary spine-anesthesia for all patients. Closed reduction of the fracture or percutaneous maneuvers was obtained and confirmed by image intensifier. The desired position of the cervical screw was in the posterior part of the central femoral neck on the profile and directed towards the center of the head on the frontal view, the point being located between 5 and 10mm from the subchondral bone and the distal locking is systematic by 5.5mm screw. The closure is done plan by plan. The loss of blood is considered minimal, no drain has been put in place for all patients. All postoperative complications were assessed. Walking with crutches without support was started the next day. The sutures were removed on the 15th day. Patients were evaluated clinically and radiologically at D21, D45, 3 months, 6 months, 12 months and 18 months. Functional assessment was performed after 6 months according to Harris Hip Score(11).

The average age of our patients is 55.56 years and the male / female ratio is 78.57% with male predominance. 3 patients were fol-lowed for diabetes under oral antidiabetic and 2 for hypertension under treatment. There were 7 patients with 31A31 and 4 patients with type 31A32 and 3 patients with fracture type 31A33. 8 patients have a fracture on the right side and 6 have a fracture on the left side. The main etiology is the fall of a high place in 7 patients, 5 following an AVP and 2 following a fall in height. The time of installation and reduction maneuvers on the orthopedic table is 24min in average. From the incision to the closing of the skin, the operation lasted 52 minutes in average (from 35min to 1H40min). The amount of blood loss is estimated to average 500ml. The duration of hospitalization is 2.75 days (from 27 hours to 6 days) and the time before the operation is 1.7 days. The postoperative complications were high in our series compared to the series of trochanteric fractures of all types and are of 4 types: a complication of sepsis on material in a patient, 2 malunions in valgus and 1 shortening> 2cm, a fatigue rupture of nail and septic complication by superficial infection of the wound. Bone healing was achieved within 3 to 4 months with the exception of one case (septic nonunion treated with nail removal and antibiotic therapy). The functional result was considered excellent and good in 72.5%, average and bad in 27.5% of cases.

Whatever the mode of treatment used, it is difficult to obtain a satisfactory reduction with a closed technique, and it is sometimes necessary to carry out an open reduction because the middle and upper gluteal muscles are attached to the proximal fragment.the vast lateral muscle, and sometimes the iliopsoas muscle. The average duration of the procedure was relatively long (52 min), it was 41 min for Kempf (for trochanteric fractures of all types) [3], and this, due to the technical difficulties encountered during the surgery. reduction. The percutaneous insertion of a Steinmann nail, mounted on a T-handle, and the open-focus reduction of the fragments through a short incision are useful techniques (27), in our series we confirm the difficulty of reduction for this type of fracture. Other complications may occur in the absence of distal locking, the diaphyseal fragment can turn around the nail and cause malrotation of the limb [4]. A serious mistake in the treatment of intertrochanteric fractures is to lock the nail with distraction between the two fragments. The consequence is delayed consolidation or non-union. For these reasons, Bartomcek prefers dynamic locking to treat intertrochanteric fractures (10) which was performed in patients of our series except for 1 and who had a pseudarthrosis. When the fracture is distractorly napped, the increased bending forces acting on the implant at the fracture site cause fatigue failure of the nail through the hole of the cephalic screw (8-10, 55, 64, 82).

With DHS, the rupture ofthe lateral portion of the cephalic screw at the tip of the lateral plate gun has been described by Wolfgang et al. and by Jakobsen (84). Bartoni ek (116) noted 08 cases of necrosis of the femoral neck; 07 (87.5%) were intertrochanteric fractures, this complication was not encountered in our series. The precocity of the intervention is certainly a determining factor of the evolution of the patient except for medical indication [5]. In most series, the average response time is just over 48 hours [6-9]. In our series it is 1.7 days. The early rise with support depends on the fracture stability, the quality of the assembly and especially the quality of the patient's bone structures (10). In the Kempf series [3] with 69% unstable fracture, 83.4% (any pertrochanteric fracture confused) had early support. In our patients, support was prohibited during the 6 weeks following the surgical procedure in all patients. Consolidation was obtained in 13 patients of our series.