Materials and Methods: Resistance measurements were obtained three times across the shank from a random sampling of nine commonly used cannulated titanium noncoated pedicle screws and nine cannulated tapscrews (three composed of titanium and six of stainless steel), one of each diameter.

Conclusion: Using non-metallic dilators, the authors propose the same stimulation threshold can be used for the testing of the cannulated tapscrew and noncoated pedicle screw of similar electroconductive characteristics to optimize the accuracy of the stimulus-evoked EMG.

Transpedicular instrumentation provides a high biomechanical stability for the stabilization and correction of the lumbosacral spine. Minimally invasive transpedicular placement of screws carries substantial risks due to the intimate anatomical relationship between the pedicle and the adjacent neural elements; in addition to the lack of a direct visualization of the anatomical landmarks. A variety of assistive techniques have been developed to detect pedicle wall violation and prevent neurological injury related to pedicle screw misplacement[1]. Stimulus-evoked electromyographic (EMG) has then become in an important monitoring method that helps in detecting clinically meaningful malpositioned pedicle screws that are unidentified by imaging techniques. The required intensity of a single pulse of current to activate a spinal nerve root for eliciting a constant and minimal compound muscle action potential (CMAP) is defined as the threshold. The cortical bone of the pedicle behaves as an insulant by having a high resistivity to electrical current flow. Theoretically, applying stimulus-evoked EMG, a low intensity of current pulse passed through the implant or/and intervening pedicle cortex to cause depolarization of a nearby nerve root, and consequently eliciting a CMAP may suggest pedicle screw malposition (such as a potential pedicle fracture, canal breach, or foraminal encroachment, etc.) based on a less resistance. Stimulus-evoked EMG provides an immediate feedback of an inappropriate hardware position.

Nine cannulated titanium noncoated pedicle screws and nine cannulated tapscrews (three composed of titanium and six of stainless steel), one of each diameter were tested. Resistance measurements were obtained by placing two alligator clips (for a steady contact pressure between the implant and electrode) over the screw and the tapscrew shank with a commercially available digital multimeter (Fluke multimeter, Model 115; Fluke Manufacturing). Each pedicle screw and tapscrew was tested three times to minimize an intra observer error. Between each screw measurement, the multimeter was zeroed (Figures 1,2).

Figure 1: Measurement of the electrical resistance of a pedicle screw.

Figure 2: Measurement of the electrical resistance of a tapscrew.

ANOVA statistical analysis was performed to assess the difference in resistance values at pedicle screws and tapscrews of different diameters. All test results were considered significant if P<0.05. 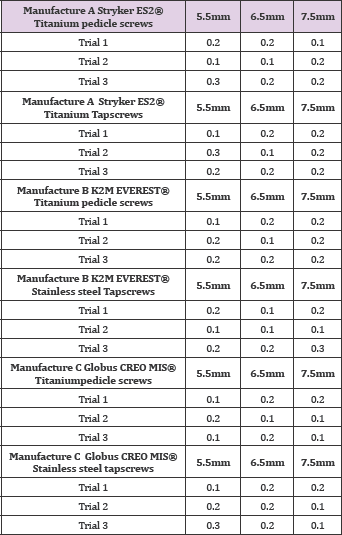 Stimulus-evoke EMG is widely used as a monitoring technique during insertion of pedicle screws in the spine. There is more consensus about the methodology including alarm thresholds on stimulus-evoked EMG for an acceptable transpedicular placement of screws in lumbosacral spinal fixation surgery. Stimulus-evoked EMG has a greater significance in minimally invasive surgery for prevention of clinically relevant pedicle wall violation [1-3]. Unrecognized screw misplacement can lead to postoperative pain, paresthesia's and paralysis. Stimulus-evoked EMG adapted to continuously electrified instruments provide immediate neurophysiological feedback and warning of suboptimal trajectories of the spinal instrumentation devices, minimizing neural injury and long term neurological complications [4]. Nevertheless, in contrast to open surgery, stimulation of the pedicle screw is uncommon in minimally invasive surgery [2,3,5] due to instrument system electrical isolation limitation. The inserted screws are usually bigger than the tapscrews, testing of the pedicle screws provides additional benefit. To our knowledge, this is the first study intending to assess the difference in resistance values among the cannulated tapscrews and pedicle screw stimulation of similar electroconductive characteristics and of different diameters, with the aim to determine whether the same threshold can be applied for stimulation of the tapscrew and the noncoated pedicle screw.

In minimally invasive surgery, most commonly used cannulated tapscrews are fabricated with stainless steel and titanium. Hollow pedicle screws are mostly used. Titanium pedicle screws are currently the most common inserted for lumbosacral spinal fixation. Titanium and stainless steel screws have been demonstrated to have similar resistance values [6]. On the other hand, coated implants have high resistance that may interfere with modern intraoperative monitoring equipment by impeding current delivery for implant stimulation [7]. Previous studies have reported the screw shank as a reliable location for the resistance assessment[6]. In addition, the shank of the tapscrew is a common location for testing intraoperatively. In the present study, resistance values were obtained by measurement across the shank of the screws and the tapscrews. The tested cannulated noncoated pedicle screws composed of titanium, and the tapscrews composed of stainless steel and titanium (similar conductive characteristics) in this study demonstrated an insignificant difference in resistance value regarding their diameters, and among pedicle screws and tapscrews. Constant current stimulation remains the most commonly used type of stimulation on stimulus-evoked EMG monitoring. In the present study, the low levels of resistance values of the tested cannulated noncoated pedicle screws and tapscrews are not clinically significant due to most constant-current stimulators are able to deliver acceptable current flow for clinical accuracy up to a circuit resistance of at least 1000ohms [6].

Stimulus-evoked EMG is a valuable and reliable monitoring modality when the tested tapscrews and pedicle screws are of similar and consistent electroconductive characteristics. On the basis of our data, with use of non-metallic dilators, we would further propose the same alarm threshold can be used during tapping and the noncoated pedicle screw placement in minimally invasive lumbosacral fixation surgery.

Using non-metallic dilators, during minimally invasive lumbosacral fixation surgery, the authors propose pedicle screws can also be tested. Moreover, the same stimulation threshold can be used for the testing of the cannulated tapscrews and noncoated pedicle screws to further optimize the accuracy of the stimulus- evoked EMG.