Should Patients be Routinely Screened for Hepatitis B Serology before the Use of Chemotherapy Due to Solid Organ Tumors? Volume 7 - Issue 5

Background: The prevalence of chronic hepatitis-B virus (HBV) is highly variable by region in the world. In chronic HBV, most of exacerbations are associated with the interaction of immune response to HBV and virus replication. All kinds of chemotherapy regimens potentially cause HBV replication.

Case Report: 58-year-old male patient, non-small cell lung adenocarcinoma was diagnosed. Adjuvant chemotherapy combination including navelbine and cisplatin was initiated for the patient. He admitted with the complaints of weakness and fatique after the one week of the second cure of chemotherapy. On physical examination, oral mucosa, sclera and skin were icteric. HBV-DNA level was measured as > 1000000000 (1 billion) IU/mL.

The prevalence of chronic hepatitis-B virus (HBV) is highly variable by region in the world. In chronic HBV, most of exacerbations are associated with the interaction of immune response to HBV and virus replication [1]. Exacerbation is similar to the increase of spontaneous immune response to HBV as those in HBeAg seroconversion. HBV exacerbation is characterized by the sudden elevated of serum aminotransferase level with or without clinical symptoms [2]. Priorly, HBV-DNA level frequently increases. Also, increase in alpha fetoprotein levels can be seen in hepatitis exacerbations [3]. Hepatitis exacerbation occurs in cases with chronic HBV rather than cases with chronic hepatitis C. Although its reason cannot be fully explained, the immune response can play a major role over the disease activity in HBV cases. The risk of reactivation is about 20-50% in HBsAg positive cases. All kinds of chemotherapy regimens potentially cause HBV replication [4]. Clear benefit or harm of routine hepatitis B screening is controversial during the use of chemotherapy in solid organ tumours [5]. By this case report and literature review, we aimed to point out the issue of hepatitis B reactivation and acute liver failure in a patient treated with chemotherapy due to lung adenocarcinoma.

Biopsy was performed by interventional radiology department in a 58-year-old male patient because of the detection a of 5-cm mass in apical segment of left lung lobe during the examination which made for the complaint of shortness of breath. Non-small cell adenocarcinoma was diagnosed, and mediastinal and distant metastases was not found by the staging tests. The patient received left upper lobectomy and mediastinal sampling. Adjuvant chemotherapy combination including navelbine and cisplatin was initiated for the patient with T2aN1M0 (stage IIA) based on the postoperative staging. His medical history was unremarkable except that Type-2 Diabetes Mellitus and inactive HBV carrier as comorbid systemic diseases. HBV-DNA level was negative and transaminase levels were normal before chemotherapy. He admitted to department of medical oncology with the complaints of weakness and fatigue after the one week of the second cure of chemotherapy.

Table 1: The course of laboratory values. 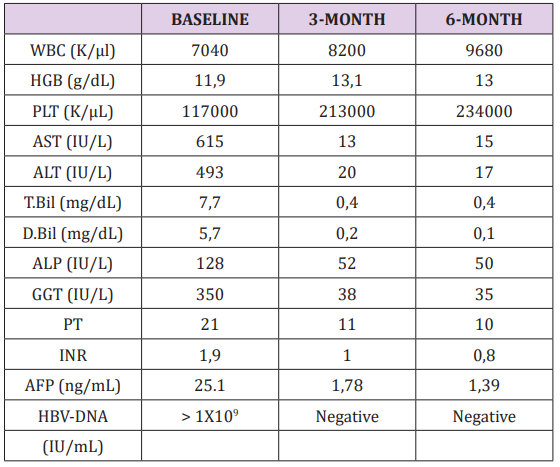 Acute exacerbation of chronic hepatitis B and acute liver failure due to the chemotherapy-induced immunosuppression was diagnosed. The patient was hospitalized and acute liver failure therapy together with antiviral therapy in the form of 0.5 mg entecavir once a day were initiated. In a short time, general condition of the patient whose liver function tests and liver enzymes fell to normal levels is improved. At the first month of treatment, HBV-DNA decreased more than 6 logs and it was negative at the third month. Then, the patient was followed clinically.

If HBV-DNA is above 2000 IU/ml, it should be continued until the absolute result is achieved like as in immunocompetent patients. Cases with negative baseline HBV-DNA can be treated with short-term lamivudine or telbivudine therapy (<12 months). If long-term therapy is scheduled, tenofovir or entecavir should be preferred. Interferon therapy should be avoided because of its suppressive effect on bone marrow. During the exacerbation, symptoms such as weakness, lack of appetite and nausea may appear in some patients. Whereas in severe exacerbations, more serious symptoms such jaundice and hepatic decompensation or death can be seen. Liver functions tests and prothrombin time of patients should be closely monitored for liver failure [7]. Serologic tests including HbsAg, anti-Hbc and anti-Hbs are recommended for patients who will be screened [6].

In conclusion, HBV infection screening have to be considered in patients scheduled to receive chemotherapy due to solid organ tumours in terms of HBV reactivation