Vegetables play a pivotal role in our diet as they are the main source of some important supplements, especially vitamins and minerals. Number of Solanum plants are used as vegetables and from these, eggplant (Solanum melongena) is one of the most common and popular vegetable grown throughout India. Based on production statistics, eggplant is the third most important crop in family Solanaceae, after potato and tomato [1]. Most eggplants in Asia are produced by small-scale farmers, and the sale of the fruits is an important source of cash income [2]. Only China and India account for about 80.6% of the world’s eggplant production area (FAO 2016). The largest eggplant producing countries in the world are China (32 Mt), India (12.5 Mt), Egypt (1.2 Mt) and Turkey (0.9 Mt) [3]. India feeds 17.3 percent of the world’s population, which is still growing constantly. Moreover, with 24.5 percent of world’s undernourished population, India is bearing a huge burden of global food insecurity (WFP-FSI 2017) [[1]]. Development of new varieties through mutation breeding with higher yield and nutrient content could be particularly beneficial to grower-consumer relationship. It would be especially important in South Asia, where annual per capita vegetable availability ranges from 10 to 54 kg (FAO 2005), far below the recommended level of 73 kg [5,6]. For any plant breeding program, the availability of genetic variability in the gene pool of a particular crop is of foremost importance because it provides a spectrum of variations for an effective and better selection process. This variability could be increased through recombination, hybridization, and mutations [7,8]. Induced mutation provides the possibility of creating desired attributes that either is not present in nature or have been lost during the selection process [9,10]. Induced mutagenesis has been established as an important method in many plant improvement programmes by treating seeds and other vegetative plant parts with mutagens [11] and it has immensely contributed to global agriculture by producing over 3248 mutants with desirable qualitative and quantitative traits in different plant species (FAO/IAEA 2017) [12]. The creation of high frequency of desirable mutations depends upon the selection of an effective and efficient mutagen [13]. This study ensures the assessment of the effectiveness and efficiency of gamma ray, MMS, DMS and DES in eggplant’s cultivar Pusa Uttam.

Certified seeds of eggplant (Solanum melongena L.) variety Pusa Uttam (PU) were procured from the Sale Counter of National Seed Centre, Indian Agriculture Research Institute (IARI), New Delhi, India. Dry and healthy seeds (10-12% moisture content) of variety Pusa Uttam were treated with different doses/ concentrations of gamma ray (5, 10, 15, 20 and 15 kR), MMS (0.05, 0.075, 0.10, 0.25 and 0.50%), DMS and DES (0.10, 0.25, 0.50, 0.75 and 1%). A set of 150 seeds was used for each dose/concentration including the control. Thereafter, the treated as well as untreated seeds were sown in 30 cm diameter earthen pots (50 seeds in each pot) for raising the seedlings. When the seedlings developed 4 to 5 leaves, were transplanted to wellprepared experimental field in a complete randomized block designs (CRBD) in three replicates for morphological and cytological studies. The row-to-row and plantto- plant distance was maintained at 60 cm and 45 cm, respectively. Seeds from M1 plants were harvested separately. For raising the M2 generation, 30 M1 plants and 30 seeds from each plant were selected for each treatment, including the control, and seedlings were transplanted in the plant progeny rows (3 replicates) at 4 to 5 leaves stage in a complete randomized block design for morphological and cytological studies. Recommended agronomical practices were employed for the preparation of field, sowing and subsequent management of M1 and M2 generation in CRBD [14- 20].

The morphological mutations were scored on the basis of characters in control plants and their deviations in the treated populations at older stage (75 days old). Following formula was adopted to calculate the frequency of mutation in M2 generation.

The formulae suggested by Konzak, were used to evaluate mutagenic effectiveness and efficiency of the mutagens [22].

*For measuring the biological damage two different criteria were used:

(i) Injury (I): percentage inhibition in seed germination 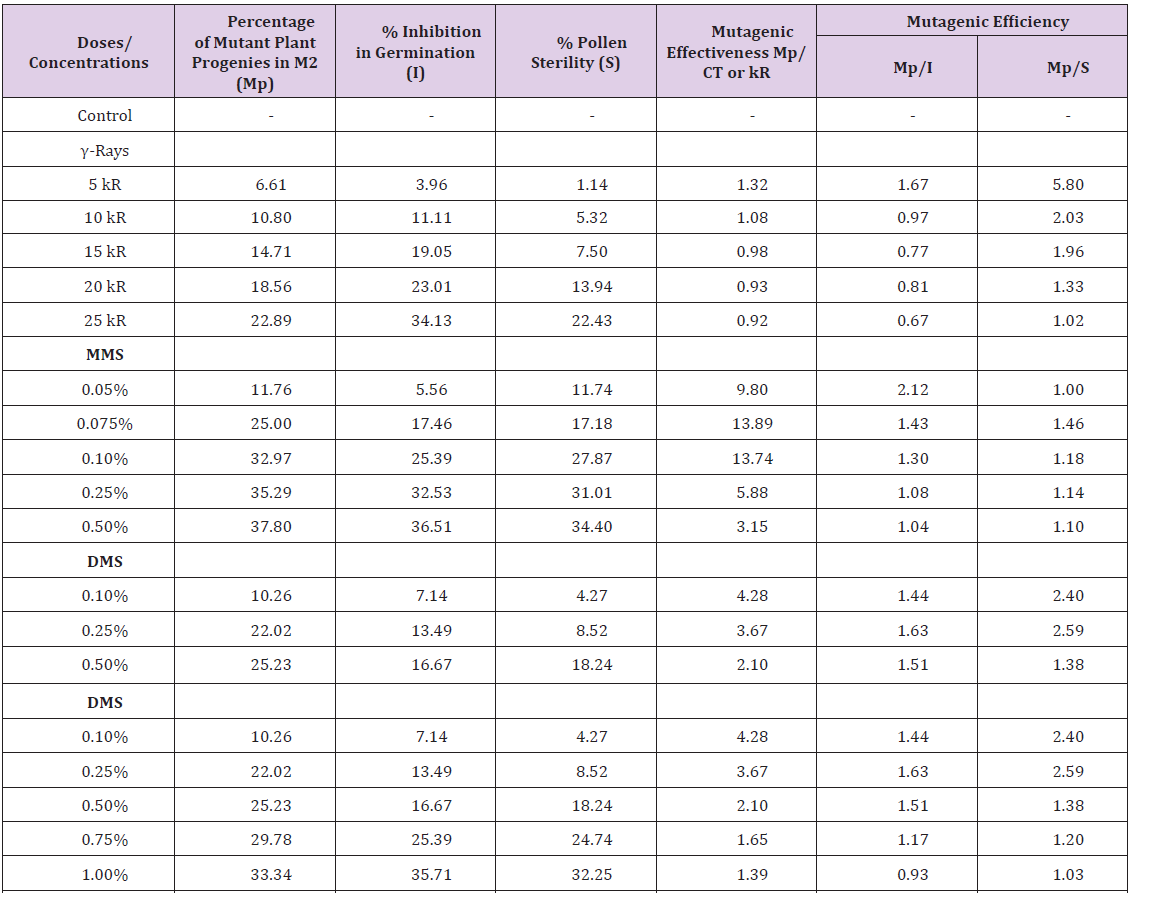 The usefulness of any mutagen in plant breeding depends not only on its effectiveness but also upon its efficiency to recover high frequency of desirable mutations [28]. In the present experiment, generally the mutagenic effectiveness decreased with increasing doses/concentrations of gamma ray, DMS and DES, but it was higher in lower and intermediate concentrations of MMS. The order of mutagenic effectiveness as determined on the basis of mutated plant progenies in M2 generation was MMS>DMS>DES>gamma ray. Moreover, the alkylating agents were found more effective than gamma ray. The decline in the mutagenic effectiveness at higher doses was due to elimination of severely affected seedlings or plants at an early stage. The toxic effect of the higher doses/conc. of the mutagens on plants may be one of the factors responsible for early elimination of seedlings and eventually resulted in low mutagenic effectiveness. Therefore, it was found to be inversely proportional to the increasing concentrations of mutagens. Similar results as observed with MMS were also noted by Reddi and Suneetha in rice, which provided the evidence that effectiveness did not necessarily increase linearly with increasing concentrations; rather every conc. had its own effectiveness, independent of the other lower and higher concentrations [29]. Mutagenic effectiveness was found to be higher at lower doses/concentrations of physical and chemical mutagens in Vigna unguiculata L. Walp [30], Trigonella foenumgraecum L. [31], Vigna umbellata Thunb, Ohwi and Ohashi [32], Lens culinaris Medik and considered that the chemical mutagens showed higher effectiveness in all above mentioned plants. The mutagenic efficiency indicates the extent of genetic damage recorded in M2 generation in relation to the biological damage caused in the same generation. The order of mutagenic efficiency with regard to inhibition in germination (Mp/I) was MMS>DMS>DES>gamma ray and the order of efficiency with regard to pollen sterility (Mp/S) was DMS>DES>MMS>Gamma ray. DMS was generally more efficient. Wani (2017) considered that the higher efficiency of a mutagen indicates relatively less biological damage (i.e. seedling injury, sterility) in relation to the mutation induced. Inhibition in seed germination following mutagenic treatments may be due to inhibition of growth regulators and metabolic disturbances during germination. Kumar and Rai have reported that reduction in seed germination is due to the effect of mutagen on meristematic tissues of the embryo of seed and due to the chromosomal damage caused by mutagen. Low chiasma frequency may be one of the causes of low pollen fertility, because chiasmata are responsible for the maintenance of the bivalents which permit normal chromosome segregation and this process ensures pollen fertility [33-36]. The decrease in the chiasma frequency denotes the induced heterology due to induced damage or changed loci of genes or intra/intergenic disturbances following the mutagenic treatments and eventually may cause pollen sterility. The decrease in chiasma frequency may also be attributed to the changes at chromosomal/DNA level, such as deletion, inversion, duplication and translocation. The lower or intermediate treatments were also found to be the most efficient in inducing mutations with relatively less biological damage. The higher efficiency obtained at lower or intermediate treatments may be attributed to their less toxic effects on germination of seed and pollen fertility.

In the present study, the alkylating agents were also found more efficient than gamma ray. These results are in agreement with those of earlier researchers like Khan and Tyagi in Glycin max L. Merrill; Wani in Cicer arietinum L.; Tripathy in Lathyrus sativus L.; Mangaiyarkarasi in Catharanthus roseus; Ambli in Pennisetum typhoides. In this context, it is concluded that the alkylating agents were proved to be more effective and efficient than gamma ray to create maximum viable mutations in eggplant variety Pusa Uttam. Out of those mutations, several were screened as desirable mutations of greater economic and agronomic importance in subsequent generation. These mutagens may also be recommended in future mutation breeding programs to obtain desirable mutants in different crops.