White lesions of the oral cavity play a major role for the general dentist, but neither are all of these lesions life threatening nor are these lesions diagnosed correctly in the day to day practice. Most of these changes usually regress back to normal on its own without even recognition of it because of the forgiving nature of the oral cavity and those who recognize it rarely get it treated at the earliest [1]. The development of cancer is a multi-stage process, with initially the presence of a precursor/pre-cancer lesion and the latter as a well-established one [2]. The term epithelial precursor lesions‟ has been used In the WHO monograph on Head and Neck Tumors. The term potentially malignant disorders was recommended at a workshop coordinated by the WHO Collaborating Centre for Oral Cancer and Precancer in UK for the Precancerous lesions of the oral mucosa and was called so as it conveys that not all disorders described under this term may transform into cancer [2].

The most common oral mucosal diseases that have a very high malignant transformation rate are oral leukoplakia, oral erythroplakia oral submucous fibrosis with the most frequently reported etiological agents being tobacco, alcohol, chewing of betel quid containing areca nut. An early diagnosis can be lifesaving; hence its importance cannot be ignored as in later stages they might progress to severe dysplasia and even carcinoma in situ and/or squamous cell carcinoma (Tables 1 & 2) [3-5]. 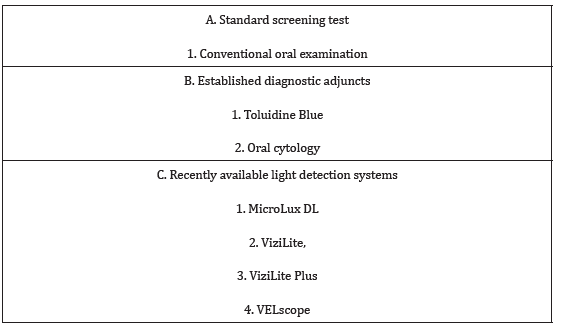 Even though the diagnosis relies on the histopathology report but even then there are certain diagnostic criteria which should be taken into account which not only helps in the diagnosis but also in the prognosis and the treatment of such conditions. Ghazali et al. [6], suggested the following criteria for the diagnosis of Proliferative Verrucous Leukoplakia (Table 3). Even though a diagnosis has been given for the lesion but there always remains a dilemma even with an expert, due to the similar mimicking lesions present in the same location and with the same properties as oral leukoplakia.

OralCDx brush biopsy is an oral transepithelial biopsy system that uses computer-assisted brushing. It is the study and interpretation of the characteristics of cells that wither off, naturally or artificially from the oral mucosa [7]. They are of significance in monitoring several sites for a large lesion and can also guide the choice of sites for incisional biopsies. It was designed to screen innocuous looking oral epithelial abnormalities for dysplasia or cancer. The detection of abnormal cells by this technique has a sensitivity of 52-100% and specificity 29-100%. Overall, the OralCDx technique appears to overestimate dysplastic lesions and produce a high number of false-positive results [7,8].

ViziLite Plus employs a disposable chemiluminescent light packet with a wavelength in the range of 490 to 510 nm. Chemiluminescence takes place when a chemical reaction produces light with varying intensity, the period and color depends on the type of reaction [7,8]. Manufacturers claim that these devices enhance tissue reflectance of oral tissues after rinsing the mouth with 1% acetic acid for a minute. The hypothesis is that a cytoplasmic dehydration agent such as acetic acid alters the refractile properties of oral mucosal abnormalities with increased nuclear: cytoplasmic ratio [7,8]. Thus, dysplastic lesions become more visible as they appear white against the light blue appearance of the normal tissue, hence termed “acetowhite lesion” [7].

Microlux/DL utilises acetic acid followed by the use of diffused blue-white light-emitting diode with an fiber-optic light used to guide the low-energy blue light. The light emitting diode (LED) transilluminator is an autoclavable light guide that produces diffused light. After rinsing with the acetic acid solution, the manufacturer claim that abnormal cells will take on a whitish hue in contrast to the surrounding tissues making it more evident to the examiner [7,9].

Acronym for Visually Enhancing Lesion Scope (VELscope). This device utilizes blue light 400 to 460 nm in wavelength to cause tissue autofluorescence, which utilizes the fact that cellular fluorophores are excited by high intensity light of particular wavelengths [7,8]. In a subject with healthy oral epithelium when viewed directly viewed through a narrow-band filter, as green-red fluorescence it appears pale green. This is because of excited fluorophores in the oral tissues. However, in dysplastic cells or potentially early tumors it appears dark green to black due to the cellular and structural changes which occur in neoplastic tissue. It is based on the fact that both the superficial epithelium and underlying stroma of developing premalignant lesions have changes in their optical properties [7,9].

Cellular alterations such as decreased flavin adenine dinucleotide concentration and collagen matrix breakdown have been associated with loss of fluorescence visualization (FV). Furthermore, decreased fluorescence as a result of increased absorption and scattering of light occurs when there are structural changes in both the epithelium and lamina propria such as hypertrophy, hyperchromatism, cellular/nuclear pleomorphism and increased microvascularity [7].