In the last years, the world of cardiology has turned the lights on the role of pro-inflammatory constellation of cytokines and interleukins in the pathophysiology of myocardial and vascular damage. Cardiomyocytes and vascular endothelial cells produce continuously several growth factors and small molecules, acting both in autocrine and paracrine manner, regulating their mitochondrial metabolism, the balance of intracellular calcium and also the resistance to chemotherapeutic damage. This review place same biological and biochemical basis on the involvement of the cardiac and vascular mirco environment on the cardiovascular diseases and on the cardiotoxicity related to anticancer drug exposure, with particular reference to Interleukin 1, 6, 8, Advanced Glycation End Products and lipid peroxidation. Moreover, some biological and clinical considerations will be discussed aimed to improve the cardiac and vascular microenvironment, also by using phytotherapics and anti-inflammatory drugs of synthetic or natural origin.

Tissue and cellular microenvironment is a complex of interations between small molecules like interleukins, cytokines, chemokines, SIRNA, hormones acting in autocrine and paracrine manner in cardiomyocytes [1]. The cardiac tissue is a pluricellular organ composed of cardiomyocytes, fibroblasts, endothelial cells, smooth muscle cells, neurons and immune cells regulating the homeostasis of the matrix deposition, neo-vascularization, inflammation and mithocondrial metabolism [2]. In the field of oncology, several work focalize their attention on the role of cancer microenvornment in the drug resistance mechanisms, growth and survival [3,4]. Inflammatory cytokines are a small category of proteins involved in several heart diseases due to their negative inotropic effects and deleterious effects on left ventricular remodeling [5]. Interleukin-1 (IL-1) is one of the main cytokine involved in the pathogenesis of coronary atherosclerosis and congestive heart failure [6]. From a biological point of view, as shown in (Figure 1), Interleukin 1, 6 and 8 via their receptors, activates inflammation pathways of crucial interest in cardiology, including NfkB , the type I myeloid differentiation factor (MyD88) and criopyrin.

MyD88 and cripririne work in synergism leading to the activation of inflammation increasing the gene expression and transcription of other pro-inflammatory, atherogenic and cardiotoxic interleukins like Interleukin 8 and 6. Interleukin 6 is a cytokine able to bind two type of receptors (soluble or membranarian receptor) stimulating the high sensitivity C‐reactive protein HS-CRP) and fibrinogen hepatic synthesis promoting tissue inflammation and atherosclerosis processes [7]. Clinically, men with high plasma IL‐6 have an increased risk of myocardial infarction [8]. However, activated cryopyrin, derived from IL-1 pathways in cardiomiocytes, stimulate the synthesis of Caspase 1 therefore promoting apoptosis with increased risk of myocardial infarction. Furthermore, Interleukin 1 leads to the activation of another protein called p38-MAPK which, in cardiomyocyte, increases the synthesis of nitric oxide which decreases the synthesis of cellular energy, called ATP, and disregulate calcium metabolism in the sarcoplasmic reticulum of the cardiomyocyte. Dysregulation of the intracellular calcium induced by the IL1 - p38MAPK axis dysregulate the contractility of the cardiomyocyte which is also exacerbated by the inhibitory action of the cryopyrin on the phospholamban (one of the regulators of the calcium influx in cardiomyocytes). The multiple regulation of cardiac metabolism from interleukins and their receptors become a point of attention in the field of cardiology and cardioncology.

In recent years, clinical research in cardiology focalize the attention on the importance of cardiac and vascular microenvironment in the incidence and recurrence of cardiovascular diseases and cardiotoxicity. Pro-inflammatory microenvironment principally based on IL-1, IL,6, IL-8, with are overexpressed in patients affected by Metabolic Syndrome or in treatment with Aldosterone Receptor Antagonists, increased Doxorubicin-Induced cardiotoxicity and cardiovascular diseases [9-12]. As shown in Figure 1, these interleukins activate multiple pathways leading to dysregulation of Sarcoplasmatic reticulum and calcium homeostasis. Another key player of the cardiomyocyte microenvironment is the receptor of the Advanced Glycation End Products (AGEs). Patients with Metabolic Syndrome have high plasma levels of AGEs [13]. As, example, plasma pentosidine levels, one of the crosslinking AGEs, has been shown to be an independent predictor of both re-hospitalization and mortality in heart failure patients independent from other known risk factors such as brain natriuretic peptide (BNP), age and renal function [14]. 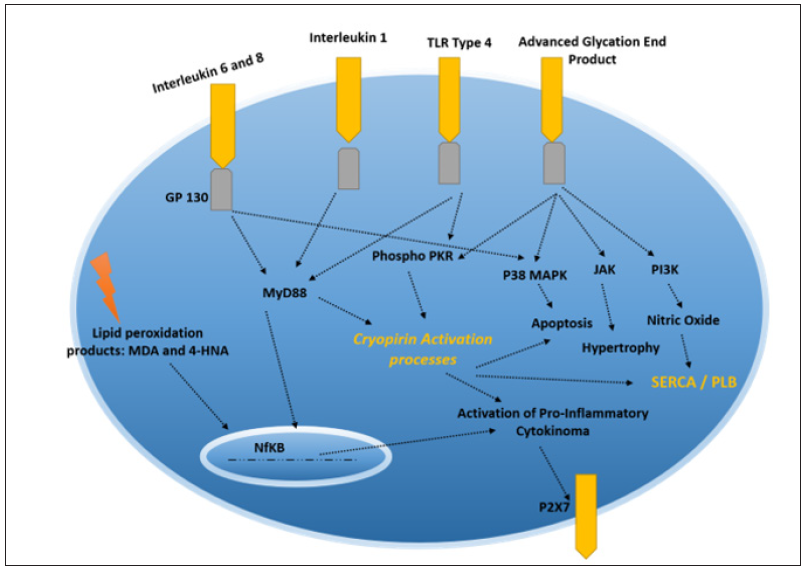 Glycated Hemoglobin (HBA1c) is a common AGE easly detectable in the blood. HbA1c is a reliable risk factor for allcause mortality and cardiovascular mortality in both non-diabetic and diabetic populations. Notably, glycation of proteins like the hemoglobin determine specific pro-inflammatory effects also in the vascular district [15] with alteration of erythrocyte membrane properties leading to erythrocyte aggregation, consequent increase in blood viscosity, and impaired blood flow with phenomena of shear stress. Shear stress trigger inflammatory response ( same of them based on iron-dependent peroxidation of proteins and lipids ) to the vascular endothelium enhancing atherogenic risk. Based on these information, dietary or pharmacologically strategies are strictly required to decrease AGE levels in patients with high risk of cardiovascular diseases or stroke. As example, following a diet based on the World Cancer Research Funding (WCRF, 2007) principles, several metabolic and cardiovascular improvements have been reached. In fact, these type of diet is based on high intake of anti-inflammatory fatty acids and aromatic glycoproteins able to decrease glusose, AGEs levels and lipid peroxidation [16]. Moreover, foods suggested in WCRF reccomandations are very rich in Quercetin and other flavonoids (like the tricin founded in brown rice) able to decrease cellular pro-inflammatory interleukins production and secretion by acting on the promoters of regulatory genes [17].

With the growing pathophysiological relevance of IL-1 in cardiotoxicity, new biologic drugs have been introduced in clinical world to restrict the actions of these inflammatory cytokines. As example, a recent clincial trial called CANTOS (Canakinumab Anti- Inflammatory Thrombosis Outcome Study) has shown interesting results. During the trial, 10,061 patients with previously diagnosed myocardial infarction were randomized to receive three doses (50, 150, and 300 mg, administered subcutaneously every 3 months) of Canakinumab, an IgG1k monoclonal antibody able to neutralizes soluble IL-1β. Notably, at 4 years of treatment, patients receiving Canakimumab at 50, 150 and 300-mg, had a median reduction from baseline in the high-sensitivity C-reactive protein (HS-PCR) level of 26, 37, and 41 percentage points greater, compared to placebo group, respectively [18]. Moreover, the incidence rate of CVDsrelated death or stroke or non-fatal myocardial infarction was 4.1, 3.8, and 3.9 events (per 100 person-years) in the groups receiving Canakimumab at 50, 150 and 300-mg, respectively, compared to 4.5 events oberrved in the placebo group. These results indicate a key role of interleukin 1 in the etiopathogenesis of cardiovascular diseases promoting therapeutic strategies towards these proinflammatory molecules involved in cardiac microenvironment.

Accumulating evidence suggests that a pro-inflamamtory cardiac and vascular microenvironment trigger a vicious cycle of oxidative/inflammatory responses between cardiomyocytes, endothelias cells, pericardial adipose tissue and immune cells. Recruitment of inflammatory mediators like Interleukin 1, 6, 8 and AGEs contributes to the progression of atherogenesis, cardiovascular disease, stroke and higher cardio-sensitivity to anticancer drugs ( like the anthracyclines). Designing preventive and therapeutic measures that target glyco-oxidative stress and pro-inflammatory interleukins may be useful tools for the management and control cardiovascular diseases. Natural bioactives and nutraceuticals derived from healthy foods, like same flavonoids, antioxidant and omega3 fatty acids are also possible strategies for the management of cardiovascular risk factors, mainly through improvement of cardiac and vascular microenvironment.