Recently, I’ve wondered what the results of old experiments would look like today. My abiding question throughout the years has been, “How do hydras parcel out parental cells and mould them into buds?” I was asking the question back in 1979 when I gave a talk at the unforgettable 4th International Coelenterate Conference hosted by Pierre and Ruth Tardent at beautiful Interlaken [1]. The talk was entitled, “Can Hydra count?” Specifically, what accounts for hydras producing replicas of itself as buds with remarkably constant numbers of tentacles? At the time I was unsure of the answer, but I was confident it was the right question. Since then I’ve grown confident about the answers: “Yes!” Hydra counts buds by filling bud modules with parental cells, and “Yes,” incipient buds have definitive numbers of tentacle rudiments. But now I wonder if I asked the right question? I think I might better have asked: “Is Hydra an alarm clock?” Are hydras set to go off with determinate buds? That’s the question I’m addressing today with new and old data [2].

Shown here is a representative Hydra viridis at equilibrium from a 1967 paper. As you see, budding is inherently polarized since it takes place in a distal to proximal direction. In this representative H. viridis, buds are displaced basally as they progress from early to later stages of development [3]. Not only is the incipient bud formed in the distal part of the budding region with distal parental cells, but buds pick up progressively more basal parental cells while moving basally. The addition of parental cells onto the elongating bud replicates the polarity of the parent [4]. Polarity is also revealed in differences between the role of cell division in the morphogenesis of the bud’s apical and basal structures. Starved animals will continue to initiate the formation of buds after growth ceases, but buds of hydras treated with inhibitors of cell division (i.e. Colcemid, colchicine, and others) and failing to incorporate tritiated thymidine do not form feet and detach [5]. Treated hydras retain buds (i.e. pseudo-colonial hydras) have two (or more) heads. While head formation is independent of concurrent cell division, the differentiation of a bud’s foot and detachment from the parent requires concurrent cell division (Figure 1). 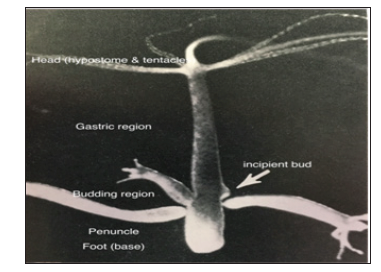 Variability of Tentacle and Cell Numbers in Buds

Under optimal laboratory conditions of feeding, illumination, and temperature, freshly detached buds of H. viridis grow for a week, commence budding, and approach their maximum size - length, diameter, and surface area [6]. In the second week these hydras reach their equilibrium condition, maintaining their body size thereafter while forming and detaching buds. The rate of cell division continues unabated at equilibrium, and cell density and total cell number no longer increase [7]. Cell division continues, nevertheless, at the same rate it had in freshly detached buds and during the bud’s initial growth period. Cells produced at equilibrium are excess but not detritus [8]. They are funnelled into buds. Richard Campbell calculated, that in H. littoralis, under optimal laboratory conditions, 85-86% of hydra’s structural cells produced throughout its gastric, budding, and upper peduncle regions are funnelled into buds in the budding region. The remaining 14-15% of the structural cells reside in the vicinities of hydra’s tentacles and foot where cells differentiate and are lost by attrition [9]. These numbers are similar in H. viridis. At equilibrium, therefore, the vast majority of cells produced on the parent’s body are “excess” taken up on buds i.e., buds are repositories of excess cells adapted to asexual reproduction [10-15].

Buds, Budding, and Tentacle Numbers as Functions of Temperature and Feeding Schedule

The formation of these early buds is not a passive consequence of parental cell movement to the budding region, and hydra’s body wall does not descend on the budding region en masse. Rather than a glue holding the two epithelial layers together, the parental mesoglea is a substratum for cell movement [16]. The production of new mesoglea components takes place exclusively “at sites of tissue evagination. The mesoglea is dramatically remodelled and epithelial cells move relative to the mesoglea” Aufschnaiter et al. [1,17].

Given, therefore, that buds are filled with excess parental cells moving to the budding region, members of my lab and I set out to ascertain the parameters of cell movement by rearing hydras on different feeding schedules and at different temperatures [18-22] (Table 1).

How then does feeding schedule influence the size of the structural cell population and tentacle number on freshly detached buds?” In my lab, H. viridis (in illuminated incubators at 21˚C) fed fresh brine shrimp larvae regularly once a day for five days a week reached and maintained equilibrium indefinitely [23-28]. We began our experiments, therefore, feeding our hydras one to four days a week. Here (Table 1), you see, as you would have expected (top data lower row), that the populations of digestive cells in newly detached buds were consistently and significantly larger on animals fed on increasing numbers of consecutive days [29-31]. However, the number of tentacles on buds did not differ significantly (0.10 < P < 0.25). Therefore, the larger number of cells (bottom row) did not significantly impact the number of tentacles (upper row) [32].

All of which brings me to “the possibility that buds are initiated… [from] a specific number of cells” [29] a definitive bud module (a.k.a. “circle” or “placode”) formed at the juncture of the gastric and budding region. The formation of such a module would be a symmetry breaking event in the parent’s body wall that is resolved by the eruption of an incipient bud and the perpendicular outgrowth of a bud primordium. Were we to assume, therefore, that there is such a thing as a bud module, its size would seem to be determined by temperature (larger at lower temperatures), while the rate at which modules are filled would be a function of the rate of parental cell division (faster at higher temperatures) [39]. The size of freshly detached buds (i.e. in terms of cell population and number of tentacles) would be largely a function of the size of the original bud module, and only marginally a function of the bud’s final cell number [40].

Returning to my original question, “Is hydra an alarm clock set to go off?” the answer is definitively positive. A hydra sets off a bud when excess parental cells migrate into the budding region to fill a bud module [41]. The module then runs through a determinate sequence of developmental events as it moves proximally and develops basal features. The number of tentacles developing on buds is determined by the initial size of the module, which is constrained by temperature [42]. The rate of bud development is constrained by nutrition [43]. The formation of the bud’s foot and detachment is determined by cell division in peduncle cells. I see that my time is up, so let me thank you for your attention. I hope we have time for some questions [44].