Over the past few years, the interest in natural medicine has been increasing in industrialized societies because of the ever-growing problem of side effects and high cost of synthetic medicines. gymnema is a native to central and western India, tropical Africa and Australia. Other names Sanskrit: Meshashringi, madhunashini, Hindi: Gur-mar, merasingi [1]. G. Sylvestre (Asclepiadaceae), a vulnerable species is a slow growing, perennial, medicinal woody climber found in central and peninsular India (Figure 1). It is a potent antidiabetic plant and used in folk, ayurvedic and homeopathic systems of medicine. It is also used in the treatment of asthma, eye complaints, inflammations, family planning and snakebite. In addition, it possesses antimicrobial, antihypercholesterolemic, hepatoprotective and sweet suppressing activities. It also acts as feeding deterrents to caterpillar, Prodenia eridania; prevent dental caries caused by Streptococcus mutans and in skin cosmetics [2]. 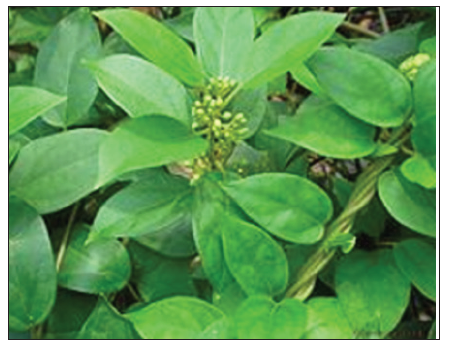 G. Sylvestre is a large, more or less pubescent, woody climber. It is occasionally cultivated as medicinal plant. Leaves are opposite, usually elliptic or ovate (1.25-2.0inch × 0.5-1.25inch). Flowers are small, yellow, in umbellate cymes. Follicles are terete, lanceolate, up to 3 inches in length. G. Sylvestre leaves contain triterpene saponins belonging to oleanane and dammarane classes. Oleanane saponins are gymnemic acids and gymnemasaponins, while dammarane ponies are gymnemasides. Besides this, other plant constituents are flavones, anthraquinones, hentriacontane, pentatriacontane, α and β-chlorophylls, phytic, resins, d-quercitol, tartaric acid, formic acid, butyric acid, lupeol, β-amyrin related glycosides and stigmasterol. The plant extract also tests positive for alkaloids. Leaves of this species yield acidic glycosides and anthroquinones and their derivatives [3]. Gymnemic acids have antidiabetic, antisweetener and anti-inflammatory activities. The antidiabetic array of molecules has been identified as a group of closely related gymnemic acids after it was successfully isolated and purified from the leaves of G. Sylvestre [4,5-14]. Later, the phytoconstituents of G. sylvestre were isolated, and their chemistry and structures were studied and elucidated [6-8,9].

Leaves of the G. Sylvestre (500g) were purchased from the local market of Uttar Pradesh, India and was authenticated at the Botany Department of the Central Drug Research Institute, Lucknow, India. where voucher specimen have been preserved with the code number 895.

The air-dried leaves of the G. Sylvestre (500g) were powdered and percolated in 95% ethanol at room temperature for 24 hours, filtered and the process was repeated four times. All the extracts were mixed and filtered. Mixed ethanolic extract was concentrated under reduced pressure below 50ºC in a rota vapour to a green viscous mass, which was dried under high vacuum for 2 hours to remove the last traces of the solvent. Weight of the dried ethanolic extract 16.25 g which was used for the screening of antifilarial activity against B. Malayi.

1mM stock solution of the ethanol extract of the G. Sylvestre was prepared in dimethylsulfoxide.

The live adult B. Malayi worms were isolated from the peritoneal cavity of jird (Meriones unguiculatus) infected 100-150 days earlier by intraperitoneal inoculation of 150-200 infective larvae (L3) of B. Malayi recovered from experimentally infected mosquitoes, Aedes aegypti Mc Call et al. [10]. After isolating the adult parasites, the peritoneal washing was passed through a membrane filter (pore size 5.0mm) and the microfilariae were pelleted by centrifugation [11]. All the animals and experimental procedures were duly approved by the Animal Ethics Committee of CDRI, duly constituted under the provisions of the Committee for the Purpose of Control and Supervision on Experiments on Animals, Government of India. This study bears the approval no. IAEC/2011/120/Renew 01/ dated 14/08/2012.

The actively motile female worms were placed individually wells of 48 well culture plate containing RPMI 1640 medium fortified with antibiotics (penicillin 100units/mL, streptomycin sulfate 100mg/mL, and neomycin mixture; Sigma, USA). Each well contained one female worm in 1mL of the medium. Simultaneously, 10 microfilariae were suspended in 200mL medium in each well of a 96 well culture plate (NUNC). The parasites were incubated at 37 0C in 5% CO2 in air for 5 days in the presence of 10mM concentration of the ethanol extract of leaves and the motility of parasites was monitored microscopically at regular time intervals. At the end of the experiment, adult parasites were transferred to fresh drug free medium for one hour at 37 0C to observe reversal, if any, in the worm motility.

The worms were later processed individually for MTT [3- (4,5- dimethylthiazol- 2-yl)-2,5-diphenyltetrazolium bromide] dye reduction assay as published earlier [12] for checking their metabolic viability. The experiments were carried out in duplicate and the degree of loss in the motility as well as percent inhibition in MTT reduction in treated parasites over the untreated controls was assessed. The extract which consistently demonstrated their lethal effects on the parasites at 10mM (highest concentration tested) with 50% inhibition in MTT reduction as compared to untreated respective controls were considered as active extract [12], while those bringing about 100% irreversible inhibition in motility of microfilariae were considered microfilaricidal.

Evaluation of IC50 and CC50

The test samples found active in primary in vitro screen were followed for IC50 using four serials two fold dilutions of each sample starting from MIC in the same way as mentioned above. IC50 values were determined by Excel based line graphic template after plotting concentration values of each sample versus percent motility inhibition of parasite on x- and y-axis. in vitro CC50 assay on Verocells (monkey kidney cell line) was performed as mentioned earlier [13]. In brief, Vero cells (104/well/100ml) in 96 well plate were exposed to seven three-fold serial dilutions of active test samples starting from 100mM at 37 0C in a CO2 incubator. After 72h, resazurin dye was added and the plate was re-incubated for 3-4h.

Intraperitoneal (i.p) transplantations of 10 females and five male adult worms of B. Malayi were carried out in 6-8-week-old male jirds. The jirds were anaesthetized by ketamine (50mg/kg, i.p), animals were quickly shaved, and a small incision was made on latero-ventral region of abdomen to introduce worms into the peritoneal cavity. The success of transplantation was affirmed by the presence of live microfilaria in a drop of peritoneal fluid aspired on day 4 and these jirds were selected to screen in vivo hits.

The ethanol extract of the leaves of G. Sylvestre and the standard drug, diethylcarbamazine were administered subcutaneously at a dose of 100mg/kg for five consecutive days to seven groups of transplanted jirds and each group had three animals. Three jirds received vehicle only and served as control group.

Assessment of Ant Filarial Activity in The Primary Jird Model

The treatment was initiated from day 5 post worm transplantation and the observations were continued till 45 days. On 45th day, the jirds were euthanized along with the untreated controls to recover worms by peritoneal washings. The recovered parasites were counted and examined for motility, death or calcification. Live female worms were teased in a drop of phosphate buffer saline (PBS, pH 7.2) to dissect out the uterus for observing the uterine contents microscopically to assess the embryostatic effect of test samples, if any [14]. The peritoneal washing collected on autopsy was microscopically observed to assess the effect of test sample on released microfilariae

The statistical analysis of the data was carried out by PRISM 3.0 using one-way ANNOVA (nonparametric). Dunnett’s multiple [13-14] comparison test was applied to assess the statistical significance of the values between treated and control group. Values were expressed as mean ± SE. P < 0.05 was considered as of low significance (*) while P < 0.01/0.001 were considered as highly significant (**/***).

The ethanolic extract of the leaves of G. Sylvestre was tested in vitro on adult worms and microfilariae (mf) of B. Malayi and the active sample was further valuated in vivo in B. Malayi intraperitoneally transplanted in the jird model and Mastomys coucha subcutaneously infected with infective larvae (L3). The ethanolic extract was found to be active in vitro (IC50: adult = 65.0μg/ml; mf = 32.5μg/ml) and demonstrated 65.0% adulticidal and embryostatic effect on B. Malayi, respectively, in Mastomys at a dose of 5 × 100mg/kg. The antifilarial activity at 5 × 100mg/kg by subcutaneous route revealed excellent adulticidal efficacy resulting in the death of 65.0% transplanted adult B. Malayi in the peritoneal cavity of jirds in addition to noticeable microfilaricidal action on the day of autopsy.

The present findings revealed that the ethanol extract of the leaves of G. Sylvestre contains promising in vitro and in vivo antifilarial activity against human lymphatic filarial parasite B. malayi which can be further explored to isolate and characterize the active molecules to provide new antifilarial agents.

The authors are grateful to the Director of CSIR (Central Drug Research Institute), Lucknow, India for providing necessary research facilities to carry out the above work and also excellent library facility. The one of us (VL) emeritus scientist grateful to acknowledge UGC Government of India, New Delhi for providing financial support which helped in compiling this work for publication.