Autotaxin (ATX) is a secreted enzyme which hydrolyzes lysophosphatidylcholine (LPC) to lysophosphatidic acid (LPA) and choline. The ATX-LPA axis has attracted increasing interest recently for both ATX and LPA are involved in various pathological conditions such as tumor progression and metastasis, fibrotic diseases, arthritis, autoimmune diseases and obesity. Thus, great efforts have been devoted in identifying synthetic ATX inhibitors as new agents for treating various diseases including cancer and fibrotic diseases. Herein, this mini review mainly focused on the binding modes of the reported ATX inhibitors and their indications correspondingly

ATX is part of the seven membered family of ectonucleotide pyrophosphatases/phosphodiesterases (ENPPs), which are characterized by their ability to catalyze the hydrolysis of pyrophosphate or phosphodiester bonds in nucleotides. ATX is distinguished from ENPPs with its function as a lysophospholipase D (lysoPLD), catalyzing the transformation of LPC into the signaling LPA (Figure 1A) [1]. The ATX-LPA axis has been concerned with a wide range of pathological conditions, including tumor progression, inflammation and multiple sclerosis (Figure 1A) [2]. Given its emerging role in diseases, ATX is actively pursued as a challenging therapeutic target accompanied with publication of several reviews [3-5] discussing ATX and its inhibitors. The aim of this mini review is to summarize different binding modes of the uncovered ATX inhibitors and describe their utilities briefly.

A. The ATX-LPA axis and downstream signals,

B. The 3D structure of ATX,

C. The active site of ATX and its binding mode with PF-8380. 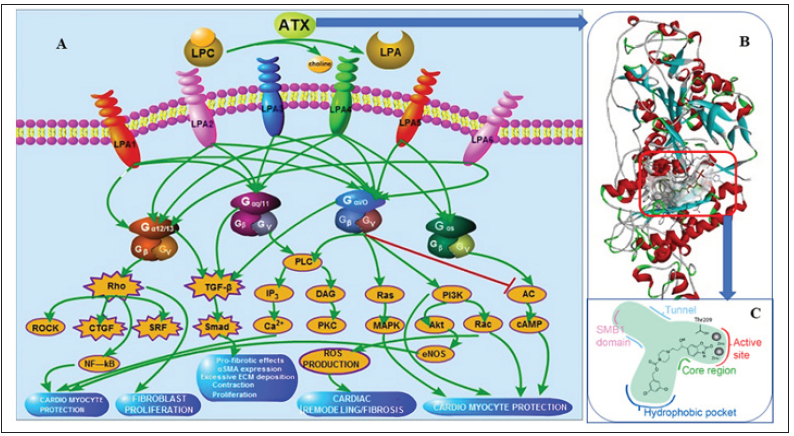 The Structure and Active Site of ATX

ATX was firstly isolated in 1992 from A2058 melanoma cells and characterized as a 125 kDa glycoprotein (Figure1B). Structurally, ATX comprises two somatomedin B (SMB)-like domains located at N-terminus, a central catalytic phosphodiesterase (PDE) domain and a catalytically invalid nuclease (NUC)-like domain situated at the C-terminus. The hydrolytic activity comes from a threonine residue (Thr210) in the enzyme’s active site, located in the PDE domain, near two zinc ions coordinated by conserved aspartate and histidine residues [6]. ATX appears to have a hydrophobic tunnel formed by SMB1 and catalytic domains as a second LPA-binding site, which connects to the hydrophobic pocket and catalytic site, consequently forming a ‘T-junction’ (Figure 1C). The channel seems likely to serve as an exit site that releases LPA into the cellular microenvironment to activate its receptors or as an entrance for the LPC substrates [7].

Since the first report of ATX structure, plenty of endogenous ligands and synthetic inhibitors have been described. Confusingly, according to the cocrystal structures, they exhibited a diversity of binding modes, which can be classified into four types [8] at this stage as illustrated in Figure 2.

a. Type I inhibitors, such as LPA species, HA-155 and PF- 8380 (Figure 2A), simulate the binding mode of LPC substrate and occupy the catalytic site [9-10]. They generally have a Zn2+ binding group and a hydrophobic tail taken up the hydrophobic pocket. Such inhibitors leave the hydrophobic channel unoccupied, which explains why many type I inhibitors exist a secondary compound (blue dots) occupying this channel, generally a species from the solution with amphiphilic properties such as cholesterol or LPA derivatives.

c. Type III inhibitors bind to the hydrophobic channel while leaving the hydrophobic pocket and the catalytic site unoccupied. They comprise PAT-505 (Figure 2C) and its analogs PAT-347, PAT-048, and the steroids 7α-hydroxycholesterol and tauroursodeoxycholic acid (TUDCA) [11-13]. It should be noted that even though type II and type III inhibitors bear an acidic group, they generally make no interaction with the Zn2+ located in the catalytic site. 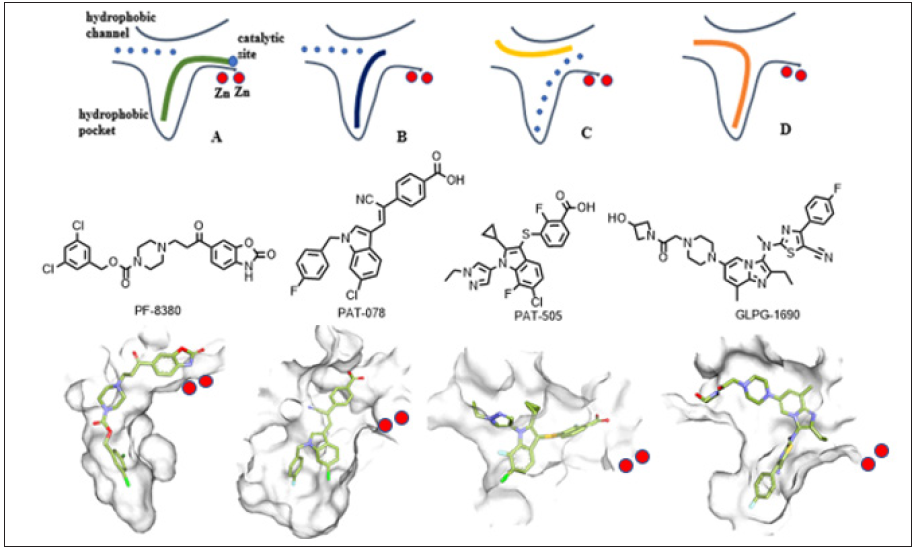 d. While, the newly reported GLPG-1690 which are now undergoing a phase II trial in the treatment of idiopathic pulmonary fibrosis (IPF) differs from other inhibitors and can therefore be categorized as type IV inhibitors (Figure 2D) [14]. Indeed, by occupying both the hydrophobic pocket and the hydrophobic channel, the two sites enabling the binding of LPC, the type IV inhibitors obstruct the binding of LPA and bile acid derivatives to ATX and avoid any interactions of substrates with the Zn2+, which may produce additional effects in regulation of the ATX-LPA axis function.

The Main Indications of ATX Inhibitors

The prominent areas of attention are the role of ATX-LPA signaling in cancer and fibrotic diseases. 2 ATX has been related to cancer since its first isolation, and inhibition of ATX delays lung metastasis and breast tumor growth in mice. The ATX-LPA signaling has been also found involved in fibrotic diseases, with IPF being the most frequently studied disease. Pharmacological inhibition of ATX attenuated disease development, ascertaining ATX a potential therapeutic target in IPF, and GLPG-1690 has been becoming the sole compound undergoing a phase II trial for treatment of IPF as an ATX inhibitor [14]. Interest is also growing for the role of the ATX-LPA axis in mouse models of allergic airway inflammation and humans with asthma. Detection of increased ATX expression in diverse inflammatory states suggests the presence of ATX-LPA axis in inflammation in general [2]. Moreover, the involvement of ATX in hepatitis and multiple sclerosis were ascertained for increased levels of serum ATX activity was detected. Therefore, the implication of ATX and LPA in IPF and cancer, but also in chronic inflammation and other human diseases establishes them as promising therapeutic targets [15].

The attention on ATX/LPA axis has been increasing over the last years, as evidenced by the plethora of patents and articles reported. By now, many compounds have been reported to inhibit ATX potently in vitro, undoubtedly, there is an urgent need for in vivo studies with ATX inhibitors in various animal models. Certainly, ATX is an attractive target for identification of new therapeutic agents for the treatment of various diseases, especially for cancer and fibrotic diseases.

The work was supported by National Natural Science Foundation of China (Application No. 8187131455) and Scientific research fund of Shenyang Medical college (20171001).