Erythema nodosum migrans was a challenging diagnosis in a 91-year-old woman. The disorder presented features of cutaneous and deep subcutaneous inflammation with a recurrent and migratory course. The extensive lesions were unresponsive to antibiotics as well as topical and systemic corticosteroid treatment. Awareness to this rare and confusing condition might allow for earlier diagnosis and treatment. Cellulitis is an acute spreading infection of the skin that also involves the subcutaneous tissues. Cellulitis and erysipelas are ‘nonculturable’ skin infections. Most cases of cellulitis are caused by beta-hemolytic streptococci. Patients typically develop high fever, chills, headache, vomiting and general symptoms within 48 hours of infection.

Local signs include skin erythema, warmth and tenderness in the affected area, but no distinctive anatomical demarcation as seen in erysipelas. Often cellulitis is confined to the calf. Culture of material aspirated from the involved skin is not routinely performed because of the low diagnostic yield. Likewise, only approximately 2% to 5% of blood cultures yield results. Cefazolin or oxacillin is often the initial treatment of choice for both erysipelas and cellulitis [1]. The differential diagnosis of calf cellulitis also entails a gamut of non-infectious disorders [2]. Here we report the history of an elderly patient who suffered during a 6 months period of atypical, migratory non-infectious cellulitis. Erythema nodosum migrans was finally diagnosed.

A 91-year-old woman was admitted to our institution for post-acute care. She has been in good general health until recently, except morbid obesity, hysterectomy 20 years ago for myoma, and glaucoma. During summer 2015 the patient suffered several episodes of painful swelling and erythema of one or the other calf. September 21 she was admitted to the department of medicine in the followings of acute onset diarrhea, fainting and acute renal failure diagnosed in the emergency department. Her temperature was 370 C and remained normal during the following days. The skin over the left calf and distal area of the left thigh was erythematous and swollen, findings consistent with cellulitis. The white blood cell count (WBC) was 21.000/mm3, neutrophils 92%, the C reactive protein 388 mg/L (normal < 3), serum creatinine 4.9 mg/dL. Under treatment with piperacillin-tazobactam, clindamycin and fluid resuscitation the diarrhea subsided, and the renal function returned to normal. A large skin ulcer evolved amidst the erythematous infiltrated left calf. Doppler venous ultrasound examination showed normal venous anatomy and flow. When admitted to our institution 6 weeks later the patient’s temperature and other vital signs were normal, as well as the WBC, CRP, renal function, routine blood chemistry, serum immune globulin. Tests for antinuclear, antiphospholipid and anticytoplasmic antibodies, hepatitis B and C, HIV were negative. Under treatment of the skin ulcer with physiological solution the wound was clean, without slough and pus. The erythema and swelling slowly retreated. However, the 8th November acute cellulitis of the right calf appeared along with swelling the right knee (Figure 1). 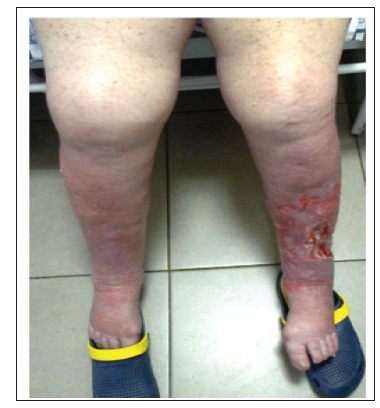 The patient’s bodily temperature remained normal as well as her appetite, though she complained of leg pain. Empirical treatment with ampicillin, topical corticosteroid, followed by a ten days course of prednisone 40 mg/day was of no apparent benefit. January the 11th the patient was referred to the department of medicine for additional work-up, in considering the possibility of paraneoplastic manifestation of an occult neoplasm, vasculitis, and a spectrum of panniculitides. The WBC was 6700/mm3 and the CRP 240. A skin biopsy showed severe leukocytoclastic vasculitis. Among tumor markers there was a slightly increased CA-125. Synovial fluid examination from the right knee showed inflammatory cells; the culture was negative. Total body CT showed mediastinal and perihilar lymph node enlargement up to 13 mm in diameter and small bilateral pleural effusions. On gallium scan there was increased uptake of the marker in numerous joints consistent with osteoarthritis. The prednisone dose was slowly tapered to 7.5 mg/day and colchicine 1 mg/day was added to the regimen. The subsequent course was uneventful with healing of the skin ulcer and subtotal remission of clinical inflammation, normal WBC and CRP results (Figures 2 & 3). One year after the first event (Figure 4) the patient was in good general health, free of pain, and walked without aid in the absence of anti-inflammatory medications. 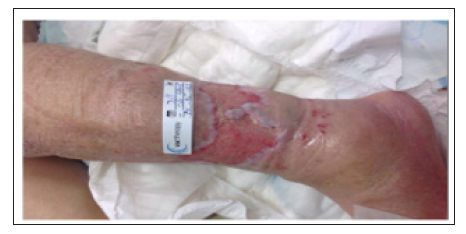 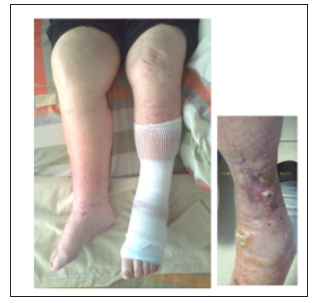 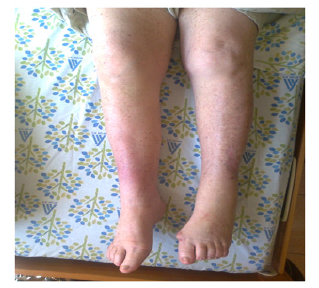 The patient’s disease exhibited features of cutaneous and deep subcutaneous inflammation, with recurrent and migratory course, unresponsive to antibiotics as well as to topical and oral corticosteroids. The diagnosis was not straightforward. Several commonly met disorders consistent with findings in this patient could be easily discarded, mainly infectious cellulitis (supported by normal body temperature and lack of response to antibiotic treatment), stasis dermatitis (no venous stasis), contact dermatitis. The work-up excluded a list of other disorders [2-4] (Figure 5) and (Table 1). Findings on clinical examination were suggestive of panniculitis. Panniculitis refers to inflammation of the subcutaneous fat tissue. Most cases are found in association with a systemic disease. Palpation of an affected area reveals the deepseated nodules and plaques. Suspicion of panniculitis typically arises on physical examination. Palpation of an affected area reveals the deep-seated nodules and plaques. The diagnosis of panniculitis depends on a thorough history and physical examination, evaluation of patient’s risk factors, skin lesion appearance and distribution, as well as any associated clinical findings [5]. 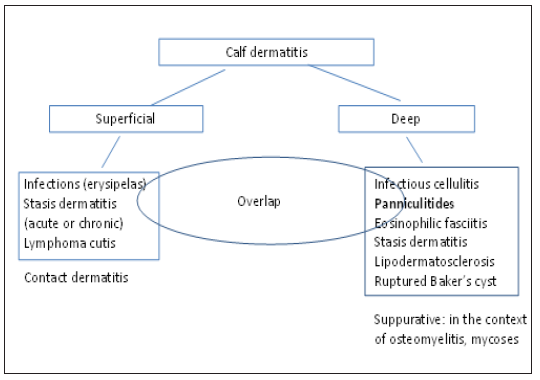 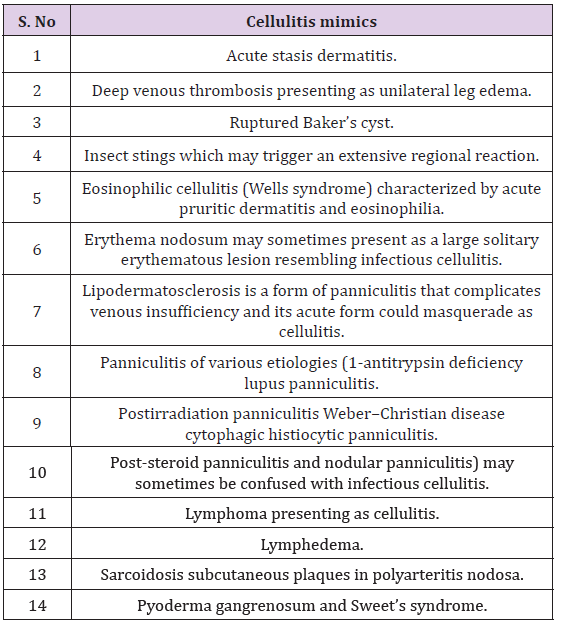 In the present case, the findings were consistent with panniculitis and no biopsy was required, more so as her skin ulcer was slow to heal. Erythema nodosum migrans, also known as subacute nodular migratory panniculitis, is a rare clinical entity, seen predominantly in women. It is characterized by nodules that migrate or expand in a centrifugal manner. The size of the erythematous plaque may be as large as 30 × 30 cm2 on the lower leg [6]. Lesions tend to be less tender than those of classic erythema nodosum. There may be few, if any, associated systemic symptoms, though arthralgias have been reported. Most cases are idiopathic, but some are associated with streptococcal infection. Untreated, erythema nodosum migrans can last for months or years. However, treatment with potassium iodide is usually effective, resulting in clearing of lesions within several weeks [6-9]. Erythema nodosum migrans is our diagnosis in this patient, manifesting features of cutaneous and deep subcutaneous inflammation, a recurrent course, migratory and extensive, unresponsive to antibiotics, topical and oral corticosteroid treatment. The etiology was obscure, and resolution of the disorder was probably spontaneous. When potassium iodide treatment came into consideration in this patient the disorder was already in remission. Awareness to this confusing condition might allow for earlier diagnosis and treatment.