FMTVDM©℗*** Nuclear Imaging Artificial (AI) Intelligence but First We Need to Clarify the Use Of (1) Stress, (2) Rest, (3) Redistribution and (4) Quantification Volume 7 - Issue 2

Considerable interest has focused on reducing the amount of radioactive isotope used during myocardial perfusion imaging as most recently raised yet again in the recently released [1] 2018 “ASNC Imaging Guidelines: Single Photon Emission Computed Tomography (SPECT) Myocardial Perfusion Imaging—Instrumentation, Acquisition, Processing, and Interpretation,” endorsed by the SNMMI. In these guidelines the authors recommend the utilization of “Stress-First/Stress-Only Imaging.” This editorial is designed to address three of the most common misperceptions currently plaguing Nuclear Cardiology & Nuclear Medicine.

As published [2] it is now well understood that all isotopes including Sestamibi, Tetrafosmin and Teboroxime redistribute, which makes a single injected dose of isotope once again feasible for redistribution. The key is to have a truly quantifiable method, which can detect and accurately measure this redistribution [3]. To fully understand this, it is important that we correct the misuse of the terms “stress”-“rest.”

In Nuclear Cardiology, we don’t really do “resting” studies. Resting is when you’re asleep. When you are asleep tonight, your heart will use about 75% of the oxygen being delivered to it through your coronary arteries. When awake, even just lying on an exam table after being up and moving around, getting ready for the day, driving to the hospital, etc., you’re using much more than you did at “rest” and the arteries supplying blood to your heart have dilated to carry more blood; so, to call this “rest” is incorrect. This is really a “baseline” study, not a “resting” study. These “baseline” studies are useful for measuring heart damage, not ischemia.

A “Stress” Study is Really an “Enhanced” Study

This term “stress” came from the work of Dr. Robert A. Bruce who introduced the exercise “stress” test, which he thought would be helpful to diagnose heart disease. The premise being that exertion precipitated angina. The original purpose of “stressing” the heart was to see if the heart could increase the amount of blood flowing to itself to meet increased metabolic demand. The only way a heart can handle the increased cardiac workload is to increase its own blood supply. This is the hearts “flow reserve” as shown in (Figure 1) [4]. To do this, the heart must relax its arteries to increase the amount of blood delivered to the heart. This means the arteries have actually “enhanced” their blood supply. The treadmill “stress” test does the exact opposite; it constricts the arteries to the heart. True “enhanced/stress” serial imaging to find CAD is achievable following a single injected dose of isotope by accurately measuring the isotope redistribution [2,3]. 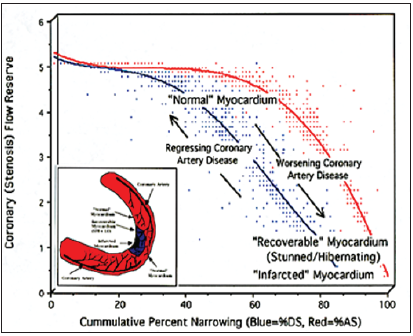 The Misunderstanding of Redistribution

Prior to FDA approval of Technetium cardiac agents, Thallium-201 (Tl-201) was the radiopharmaceutical used for myocardial perfusion imaging (MPI). Once injected, the isotope was given sufficient time for myocardial uptake at usually 1 hour. At that time, the first set of pictures was acquired. Over a few hours, the concentration of the isotope in the myocardium changed (~4 hours), depending upon the blood flow and myocardial cellular tissue function. The second set of pictures was acquired at this time. This change in distribution of a single dose of Tl-201 was called “redistribution.” The correct definition of “redistribution” today has not changed. It is the movement of a single injected dose of isotope over time, not the comparison of two different injected doses (viz. using the older terminology “stress-rest” injections); even though the use of comparing “stress” to “rest” images has erroneously been called “redistribution.” In fact, when two doses of isotope are injected into a patient, the clinician loses all ability to determine which dose of isotope they are seeing where as the two now blend together.

With the introduction of Technetium cardiac compounds, of which the primary author wrote the first SPECT paper on Teboroxime [5], physicians mistakenly believed that redistribution did not occur with Technetium agents under ischemic conditions, despite published reports from multiple investigators at multiple imaging centers using multiple scintillation cameras, demonstrating ischemic redistribution of Sestamibi, dating back to the mid-1990s, in addition to the package insert itself stating “Sestamibi undergoes myocardial distribution (redistribution).” While the European literature continued to discuss “stress-redistribution”, the U.S. literature and conferences changed to the “stress-rest” or “rest-stress” protocol for diagnosing myocardial perfusion defects. Technetium cardiac agents do, in fact, redistribute [2], making “stress-first/ stress-only” protocols valid and accomplishes a reduction in patient radiation exposures in nuclear medicine.

The Misunderstanding of Quantification

It would appear that everyone is beginning to understand the Importance of QUANTIFICATION for use in Medicine, particularly Nuclear Medicine. Clearly quantification of nuclear imaging as shown in (Figures 2 & 3) is long overdue, with the errors associated with qualitative imaging being deemed no longer acceptable. With the recent introduction of mandates by CMS, ASNC and the SNMMI for Quantification and the recent AMA vote to establish a CPT code for “absolute quantification of myocardial blood flow” [6], it is not surprising that papers are beginning to be published on the topic. Recent publications by Thompson [6], Zhao [7] and Humber [8] demonstrate the misunderstanding that is permeating Nuclear Imaging; viz. calling something “quantified” when it truly isn’t. True quantification [9-14] is the ability to accurately measure what one claims to be measuring. In Nuclear Imaging the ability to accurately measure isotope scintillation is dependent upon the demonstration that the measuring tool, be it inter alia SPECT or PET camera is [1] accurately calibrated to a known standard, [2] that the camera is measuring what it is calibrated to measure and [3] that it can accurately and reproducibly measure this known standard as it changes over time, i.e. serially, and consequently able to measure our health or absence of it. 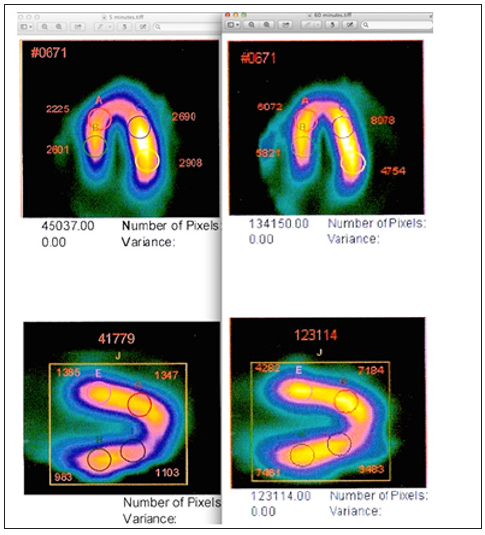 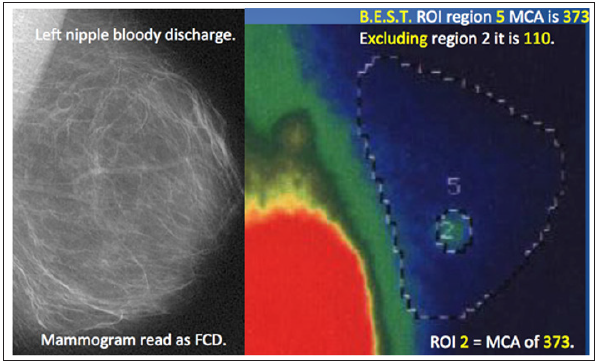 The publications by Thompson [6], Zhao [7], and Humber [8] are extremely important because they raise specific questions regarding the ability of our modern PET (and SPECT) cameras to truly quantify changes in disease before, during and after treatment, using a semi-/pseudo-quantification method referred to by the authors [6-8] as an “absolute quantification of myocardial blood flow” when it is in fact not an “absolute quantification”. The ability to “truly and accurately quantify/measure” changes in regional blood flow and metabolism is dependent upon equipment being calibrated to a known standard [2,3,9-14]. A non-standardized measuring tool is unreliable as has been demonstrated [6-8].

TRUE Quantification of the isotope is not a semi-/pseudoquantification based upon extrapolating results using extraction data mathematically derived to “correlate” with results [8]. The word “correlate” [8] should be the giveaway clue, limiting the ability to truly quantitatively measure changes [9-14] in regional blood flow and metabolism. Such a method makes flawed presumptions including that the entire isotope absent from the arterial bed has gone only to the tissue of interest and nowhere else. The method also uses a matrix setting, which as we have previously demonstrated [10-14], produces a 33.9% error due to septal artifact, Fourier transfer and modulation transfer function. These limitations produce a semi-/pseudo-quantification derived from “first-pass extraction” and not a True measurement of the tissue isotope scintillation within the tissue of interest; particularly as those changes occur serially over time, a requirement for measuring treatment responses and coronary artery disease [9-15].

Accuracy is defined as the ability of the tool (scintillation camera) to correctly measure the change in isotope scintillations over time. This patented process is known as “The Fleming Method” and is the first part of the patent known as “The Fleming Method for Tissue and Vascular Differentiation and Metabolism using same state single or sequential quantification comparisons” and “Quantified differentiation and identification of changes in tissue by enhancing differences in blood flow and metabolic activity” [9- 15]. Other methods are “semi-/pseudo-quantitative” while only FMTVDM©℗ provides true “absolute quantification of myocardial blood flow (Figure 2)” and tissue metabolism (Figure 3) including “calibration”, making FMTVDM©℗ THE tool “ready for prime time” [6].

With a clearer understanding of these terms, FMTVDM©℗ stressfirst/ stress-only imaging is here! Artificial Intelligence (AI) is not a repository of human errors. It is a truly quantified method resulting from scintillation camera calibration to a known standard, serial acquisitions of a single injected dose of isotope with quantification of changes (redistribution) of that isotope scintillation over time, the insertion of those scintillation changes into proprietary equations derived by real time quantified changes in blood flow [3] deriving an unbiased non-qualitative “quantitative” diagnostic result without introduction of human error and it is here [2-4,9-15].