To determine the effect of weekly physical activity on biological age (BA) parameters, we conducted a study among 265 first-year female students who were divided into the experimental (EG, n=135) and control (CG, n=130) groups. It was established that if at the end of the experiment the BA parameters of the CG girls did not differ significantly from the average data of the university (p>0.05), then there was a statistically significant decrease in the BA parameters of the EG girls. This was confirmed by statistical probability (p<0.01), which suggests the dependence of biological age parameters on the extent of weekly physical activity.

Apanasenko et al. [1], developed a simple and accessible method of human health status assessment for qualification of nursing staff and health professionals in the field of physical culture and sports. Scientific studies have found that 25 years ago, about 8% of the population had the «safe» health status, and now-less than 1%. Thus, according to HL Apanasenko (2015), it is reasonable to believe that this situation is the medical and biological basis of depopulation in Viet Nam.

In order to assert to what extent the degree of ageing is consistent with the chronologic age, it is necessary to compare the individual biological age with a proper biological age (PBA), which characterizes the population standard for age-related depreciation. Having calculated the index of biological age (BA/PBA), it is possible to find out what fold the biological age of the subject is greater or less than the average biological age of his/her peers [3].

Gerontologists had to introduce the concept of «biological age» following they were convinced of the difference in ageing of the human body systems. Each organ is appeared to live on its own individual schedule. The heart, lungs, nervous system wear out the fastest, and the digestive organs a while later. Therefore, peers often look differently. Above all, people with hypertension, diabetes mellitus and overweight patients are biologically older than their peers. According to, in theory, the biological age should coincide with the passport one (2-3 years more or less). However, if the index of biological age exceeds the passport data for 9-10 years, it is a disaster.

To determine the effect of weekly physical activity on the BA parameters, we conducted a study of 265 first-year female students who were divided into experimental (EG, n=135) and control (CG, n=130) groups. The study of the pedagogical experiment lasted throughout the academic year. During the experiment, the effect of physical activity on the biological age parameters of the EG girls was determined. In the study, the statistical probability of difference between the biological age of girls in the experimental and control groups in relation to the university average data was determined using the Student’s test, as well as changes of the results over time in each study group was evaluated. The aim of the article is to study the influence of physical activities on changes in the biological age parameters of the first-year female students from An Giang University.

a) To study the dependence between the biological age of the first-year female students and a weekly physical activity.

b) To develop and test the model of weekly health-improving physical activity and sports activity of the first-year female students.

Throughout the entire period of studying at a university, a whole range of tasks must be addressed, among which the following is a priority: to reduce the number of illnesses, to improve health and to increase the level of students’ physical fitness and secondary to that, to improve the mental performance of students. Consequently, it is necessary to create and maintain an environment and a microclimate in a higher educational establishment that will contribute to the formation of goals, values, principles of healthy lifestyle and control over the factors that determine or affect the student’s health [3].

The student’s purposefulness, life activity or, conversely, passivity depends on his/her values. The developed system of values in students incites them to take health-improving actions and to adhere to the requirements of a healthy lifestyle. The student’s system of values is not unchanged. The person lives and is formed in the conditions of the social environment, living conditions, the system of education and upbringing; the system of values changes from a course to a course; new values appear; the old ones are reappraised and re-evaluated. The health state, living conditions and material well-being, as well as level of physical fitness, etc., make allowances to the hierarchy of vital values of the student’s personality.

The most important urgent questions that scientists and practitioners have been looking for many years are as follows:

a) What are the social values, biological essence, norm, the real level, deterministic factor structure of students’ health?

b) What should be done to create, strengthen, preserve and improve the students’ health under the market-based relations?

c) How and by what factors we should influence the youth in order to educate their motivation to maintain health and improve mental and physical conditions?

The most important thing for evaluation of the body viability is given not by morbidity indicators, but by the general biological, non-nosological characteristics of this state, which is based not on the disease classification, but on the understanding of the disease itself. Such evaluation is presented by the human biological age [4].

Biological age is a generalized concept that reflects the individually achieved level of morphological and functional maturity of individual tissues, organs, systems, and the entire body. The biological age depends on the genetic features of growth and development, as well as on the environment, in which the individual lives, on the socio-economic, domestic, financial and other factors that determine the way of life. In contrast to the nosological diagnostics, which is qualitative in its nature and does not reflect the quantitative characteristics of the body state, the biological age allows us to assess the functional state of human systems and organs. Although known methods of biological age determining do not allow to measure the degree of molecular and genetic «ageing» caused by the deterioration of functional activity of the human body, and differences in conditions and lifestyles of different segments of population «erode» the correspondence between markers of ageing and viability, even under these restrictions, the biological age yet remains one of the most probable indicators of human vital activity. In the experimental program that we developed, students were provided with theoretical knowledge, and motivation for health improvement was formed. This program contributed to an increase in the level of physical fitness, to an increase in weekly motion state, performing various forms of active rest during the academic day, which in general is the basis of health-saving technologies (Table 1).

Table 1: Model of the weekly physical and sports activities of students in special medical groups. 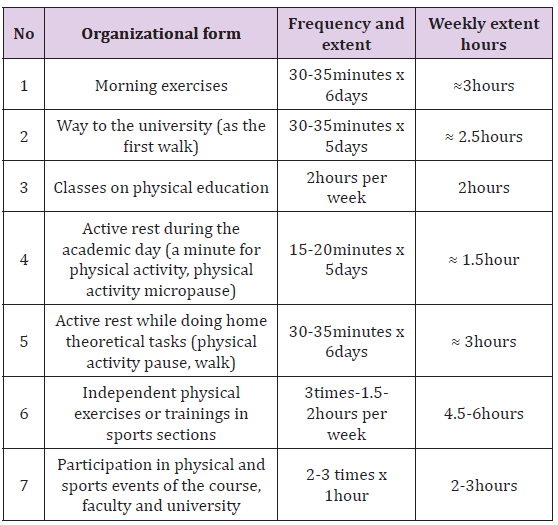 As Table 2 shows, there is no positive effect of physical education classes in CG girls (only 2hours per week). BA parameters are almost the same as average values for the university (average values for the university 38.9 ± 0.71 vs. 39.03 ± 0.68 years in CG girls, p>0.05). In some cases, such a system of physical education negatively affects the health of student youth. Having physical activity once a week can lead to a negative feeling for the next few days (muscle aches, bad sleep, loss of appetite, sometimes headache, reluctance to attend physical education classes due to these symptoms, etc.). 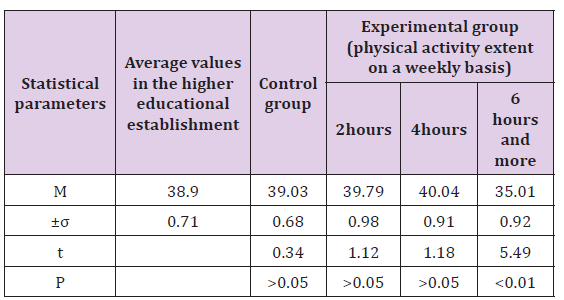 The best result was obtained in girls of the 3rd EG. Conduction of one class on physical education and another six and more independent hours of training per week, contributed to a significant reduction in BA parameters at the end of the experiment. Thus, the BA parameters of girls in the 3rd EG are significantly lower than the average values at the university: 35.01 ± 0.92 vs. 38.9 ± 0.71. This is confirmed by statistical probability (p<0.01). The determined system of health-training classes has proven a high degree of efficiency and may be is a kind of standard in establishment of weekly motion status for students of a higher educational establishment. Biological age data indicate the high efficiency of the experimental method. The well-being of girls in the 3rd EG improved, oxygen capacity of the lungs increased, redox processes in the body increased, function of the gastrointestinal tract and excretory organs was normalized, coordination between the muscle activity and vegetative and trophic functions improved, etc. The results of our study coincide with the data of other Vietnamese scientists [5].

The greatest effect is proved to occur while having six hours or more of independent training and two hours of physical education classes weekly. This is the minimum that girls should do in order to maintain good physical condition, as well as to influence on the biological age reduction. The main reasons for insufficient effect of physical activity on the biological age parameters of the first-year female students of An Giang University are:

The first and the main reason is insufficient number of hours of physical education classes. In general, educational establishments, girls receive 20 to 30% of the required motor activity, and in higher educational establishments, teachers begin to work with girls, in fact from the base level. Therefore, the number of hours for restoration, development and improvement of physical conditions, for motivation to self-improvement, for giving them the basics of physical education, must be significantly increased, then provided by the university’s educational part [6-8].