The Anterolateral Thigh Flap: Clinical Applications and Review of the Literature Volume 7 - Issue 2

The anterolateral thigh (ALT) flap has gained popularity in reconstructive surgery in recent years as its advantages have come to be widely recognized. We report the senior author’s experience over a five-year period with the use of the ALT flap. The ALT flap is a highly versatile flap that can be used to reconstruct a variety of defects. The flap’s concealed donor site scar, decreased need for skin grafting, decreased donor site morbidity and great versatility make it a first-line option for many different types of defects.

Free tissue transfer for the repair of complex defects is a mainstay of modern reconstructive surgery [1]. Reconstruction with the anterolateral thigh (ALT) flap was first described by Song and colleagues as a septocutaneous flap [2]. However, studies have shown that in the majority of cases, the vascular supply arises from musculocutaneous perforators through the vastus lateralis from the descending or transverse branches of the lateral circumflex femoral artery (LCFA) or the LCFA itself [3-9]. The ALT offers the advantages of a long and robust pedicle [5,6,10,11], a significant volume of soft tissue [9,12,13], the option of a sensate flap [14,15], a pedicled option for regional reconstruction [16-20], and the ability to operate using a two-team approach with no patient repositioning. In addition, the flap offers an excellent donor site aesthetic result when closed primarily. Due to these advantages, the ALT flap has become a workhorse for reconstruction of the head and neck [21-23], extremity [24-26], trunk [27-29], and perineum [17,30-35]. Potential pitfalls of the ALT flap include an extended operating time due to delicate dissection of musculocutaneous perforators [10] and poor aesthetic outcome if the donor site requires a skin graft. We present a single surgeon clinical experience in the reconstruction of complex defects using the ALT flap and highlight the flap’s extremely versatile features.

With the patient supine, a line is marked from the anterior superior iliac spine (ASIS) to the superior aspect of the lateral border of the patella [9,13,36]. Centered at the midpoint of this line, a medially-oriented semi-circle with a radius of 3cm is marked, indicating the site at which the primary perforator will be found. Presumptive sites of additional perforators are marked at 5 cm both distal and proximal to the primary perforator along the ASIS-patellar line [3,4,6,10] (Figure 1). Perforators are then confirmed Abstract The anterolateral thigh (ALT) flap has gained popularity in reconstructive surgery in recent years as its advantages have come to be widely recognized. We report the senior author’s experience over a five-year period with the use of the ALT flap. The ALT flap is a highly versatile flap that can be used to reconstruct a variety of defects. The flap’s concealed donor site scar, decreased need for skin grafting, decreased donor site morbidity and great versatility make it a first-line option for many different types of defects. Keywords: Anterolateral Thigh Flap; Soft Tissue Reconstruction; Outcomes; Free Tissue Transfer; Myocutaneous; Fasciocutaneous Abbreviations: ALT: Anterolateral Thigh; LCFA: Lateral Circumflex Femoral Artery; ASIS: Anterior Superior Iliac Spine The Anterolateral Thigh Flap: Clinical Applications and Review of the Literature Peter L Deptula, Travis J Miller, Lawrence Z Cai and Gordon K Lee* Department of Plastic Surgery, Stanford University Medical Center, California Received: July 19, 2018; Published: July 25, 2018 *Corresponding author: Gordon K Lee, Department of Plastic Surgery Residency Stanford Plastic & Reconstructive Surgery, Director of Microsurgery & Professor of Surgery Program Director, 770 Welch Road, Suite 400, MC: 5715 Palo Alto, CA 94304-5715, Italy, Tel: 650-723-5824; Fax: 650-725-6605; Email: by Doppler ultrasound. At this point, a template of the defect is used to mark out the skin paddle. Intraoperatively, in the intermuscular septum between the rectus femoris and the vastus lateralis, the LCFA and its branches, and venae comitantes are identified. Perforators are identified and followed.

Figure 1: The anterolateral thigh is marked preoperatively. The vascular pedicle is mapped out with confirmation by Doppler ultrasound. 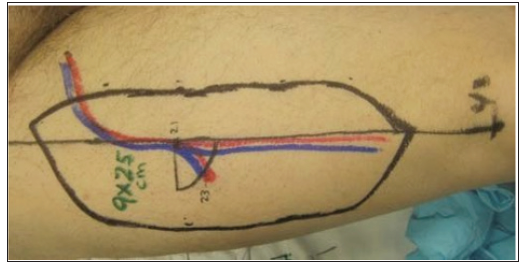 Figure 2: The ALT flap is elevated. The pedicle is seen within the intermuscular septum between the vastus lateralis and rectus femoris muscles. 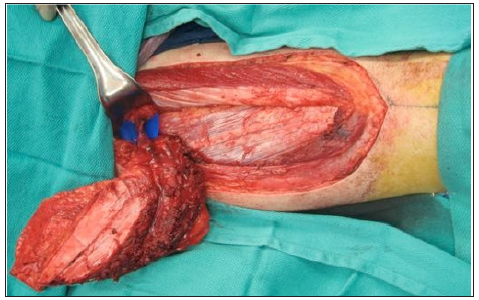 If a perforator from either the transverse branch or descending branch of the LCFA or LCFA itself is identified, the flap can be raised as a septocutaneous flap. In the majority of cases, [4,6] perforators are musculocutaneous, and the ALT must be elevated either as a perforator flap with careful intramuscular dissection, or with a variable amount of vastus lateralis muscle (Figure 2). To raise the ALT as a sensate flap, the lateral femoral cutaneous nerve must be included and may necessitate proximal and lateral extension of the incision. Once the flap is raised and the pedicle transected, the donor site can be closed primarily in defects up to 12 cm in width, depending upon the laxity of the skin. The fascia lata is not approximated and a closed suction drain is placed at the donor site.

Figure 3: An ALT flap is tubularized for esophageal reconstruction. 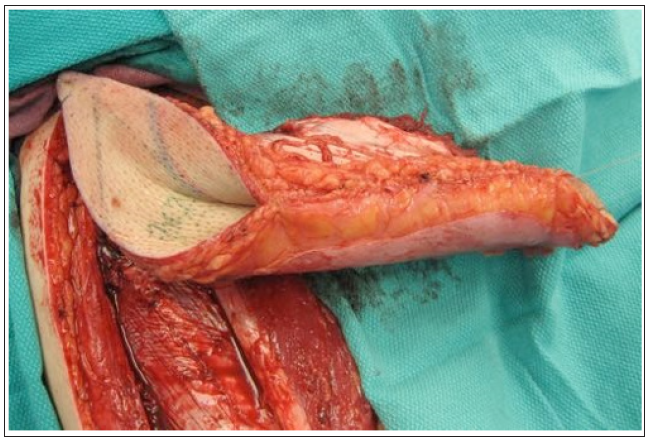 Figure 4: A tubularized ALT flap is inset for esophageal reconstruction. 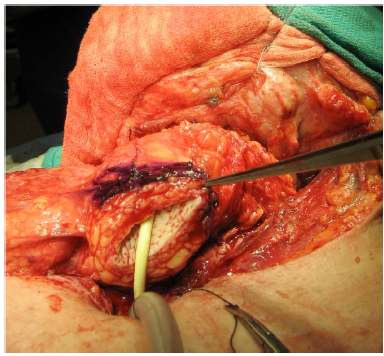 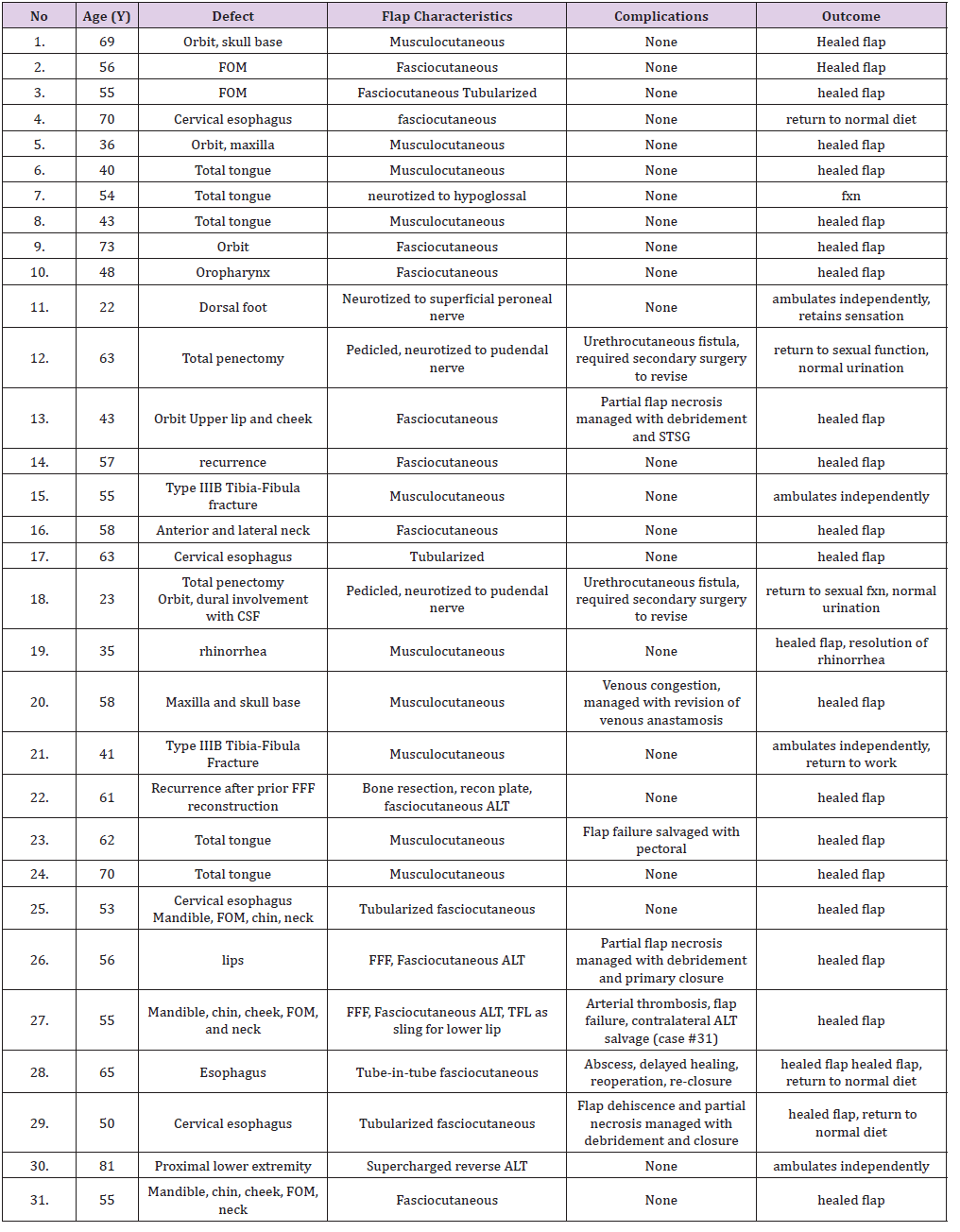 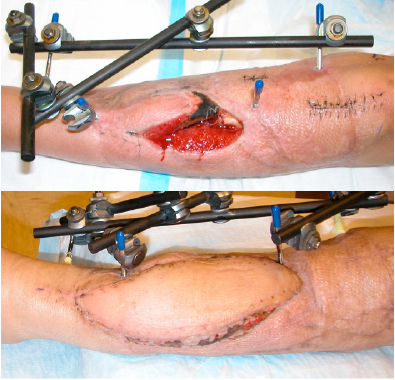 The patient receiving a sensate flap for lower extremity reconstruction reported adequate protective sensation. The patient who received a musculocutaneous flap neurotized to the hypoglossal nerve was able to maintain adequate oral intake. As expected, anesthesia of the flap and progressive atrophy of denervated muscle was noted in all other cases. Five donor sites required skin grafting; all others were closed primarily. Follow-up ranged from two months to four years, with an average follow-up of 12.4 months. Return to activities including participation in athletics was noted, except where limited by extensive lower extremity injury. There were two instances of total flap loss (6%). Partial flap loss occurred in three patients. No donor site complications were noted.

One of the major advantages of the ALT is the variety of available tissue that can be elevated, thereby permitting adipofascial, fasciocutaneous, and myocutanous flaps [9,12,13,37,38]. In cases where patients’ body mass index is high, extensive subcutaneous tissue can be a potential pitfall when a thin, pliable flap is needed. In this case, thinning of the ALT either primarily or as a secondary procedure allows for further customization of this versatile flap to the defect [39]. While some cadaver studies suggest a degree of vascular compromise in thinned flaps [40], other authors have found that this practice can be performed safely [41]. The ALT as a flap of choice over other workhorse flaps is in part due to the lack of functional morbidity [42] and excellent donor site aesthetic outcome [41]. Donor sites as large as 12 cm in our study were closed primarily, without complication. It has been suggested that even larger defects can be closed if fascial closure is also performed [43]. However, this technique increases the risk of elevated compartmental pressures and remains a concern in light of recent reports of ALT donor site compartment syndrome [44].

Pre-operative assessment of patients undergoing reconstruction with an ALT flap remains an evolving area. Some authors advocate for preoperative angiography in patients in whom popliteal pulsations are lacking, and lower thresholds for immediate arterial reconstruction using a venous graft [45]. For routine preoperative evaluation, color Doppler flowmetry [46], CT angiography, and CT-guided stereotaxy [47] have all been established as effective. However, these techniques have not been shown to be superior to traditional pencil Doppler evaluation along with clinical exam. Tedious intramuscular dissection of perforating vessels can prolong operative time significantly [5,10,48,49]. Dissection is eased by taking a small cuff of surrounding vastus lateralis muscle, which also reduces the risk of vascular injury [49]. This technique can even be used in cases where a thin, pliable flap is desired, as the denervated muscle cuff will atrophy over time.

The advantages of the ALT flap are numerous: a long and robust pedicle, the option of a sensate flap pedicled flap for regional reconstruction, flexibility in volume and tissue types with or without thinning, shortened operating time of a two team approach without repositioning, and superior donor site outcome. In our experience, these benefits outweigh the potential pitfalls of extended operating time and unsatisfactory aesthetic outcome if the donor site requires a skin graft. In the former case, a small muscle cuff can greatly ease the flap harvest. In the latter, the ALT donor site is less exposed than other flaps that provide equally large volumes of tissue, and produces no functional morbidity at the donor site. For these reasons, the highly customizable ALT has become a versatile and reliable workhorse flap for a variety of complex soft tissue defects at our center.